Shane Hitt is a die-hard Honda ATC rider from West Virginia. He works hard running his company rebuilding wind turbines. When he can get away from work, he wants to play just as hard. Fortunately for Hitt, Rath Racing’s owner and commander in chief, Daryl Rath, knows how to play and race hard. Even better, Rath, a master of building trick rides and racing them, knows how to build cool stuff to have fun on.

Hitt had a long-time dream of owning one of the most powerful and plain nasty ATCs ever created. He showed up at Rath’s shop with a pile of parts. A frame from a 1985 Honda ATC 250R, an exhaust that matched the engine but didn’t fit the ATC, black plastic bodywork, and a motor were left at Rath Racing. A parts pile like that would be daunting for some, but Rath’s shop is the mechanical equivalent of the Fortress of Solitude for Superman.

Daryl and his crew were to transform the parts pile into what we call “Black Beauty.” The kicker of the whole build is one of the most powerful production two-strokes available. Hitt had sourced a Honda CR500R 500cc two-stroke motocross engine that needed to find its way into the ATC 250R frame cradle. Even when you have a frame and an engine from the same manufacturer, they never just jump right together. This would be a custom build in the truest sense of the word.

GIFT OF THE GODS

Honda built the liquid-cooled CR500R from 1985 to 2001 without many major engine changes. The non-power-valve engine was always a brute. At one point in the rpm range the power jumped up 18 horsepower in 1500 rpm! Starting one takes talent and dedication. With two decades since Honda built the last new CR500R, fewer and fewer people are around who experienced riding one. A CR500R makes more power than a modern 450cc motocrosser, but it isn’t nearly as civil or easy to ride as a modern four-stroke. Anyone who has experienced one will doubtless tell glorious riding stories of untameable beasts with massive power output!

Like most stories about the “good old days,” the legends of the CR500R are outsized and some distance from reality. Nevertheless, stories about the sheer power and (compared to modern machinery) its violent delivery are true. Suzuki is the only company that injected a 500cc two-stroke production sport ATV into the market. It has a cult following and a nickname of “Quadzilla.” A Quadzilla would be the last word in civility compared to a compact three-wheeler with even more power that is more violent in delivery than the LT500R.

Depending on how sensible you are, it could be fortunate or unfortunate that Honda never chose to offer an ATC three-wheeler with an open-class two-stroke powerplant. Shane Hitt works with giant machines with blades, so it isn’t too surprising that he felt that his old Honda ATC deserved the extra ponies of a CR500R engine swap. Some folks think that the ATC 250R was overpowered as a 250, so a 500cc engine should create a monster.

The Rath crew took the 1985 ATC 250R frame and modified it with custom engine mounts and frame modifications. The new engine is larger than the stock 250cc powerplant, so Rath cut the downtube out and dropped the lower frame rails by 1.75 inches. Once there was room for the new engine, everything was welded together. On an ATC 250R or a CR500R motocross motorcycle, all the engine mounts are solid. For Black Beauty, Rath came up with an anti-vibration mount for the headstay on top of the cylinder head. The engine was placed snuggly in its new home after the frame was powdercoated.

The 500cc powerplant is forceful enough in stock form. However, Daryl’s crew found a 39mm PWK Keihin carburetor to help provide a perfect air-to-fuel mixture for the engine. Hitt had dropped off a Pro Circuit CR500R exhaust system, but it had to be cut and modified to fit in the more compact ATC chassis. It was worth the work, since the pipe has the correct dimensions to get the best performance from the engine. A custom intake system that’s running a K&N air filter let the 500 breathe clean air easier. VP Racing fuel mixed with Maxima Castor 927 2-stroke oil is fed to the carburetor. The Honda engine must be kick-started to get the engine fired up and ingesting fuel and air. An ATC 250R has a forward kickstart lever, but the dirt bike engine has a rearward kick. With a rear kick the bodywork is in the way, so the Rath crew installed their custom flip-top kit for the rear fender and seat with seat mounts to get the clearance to fire it up. That means that the rider must dismount and flip the seat and fenders up for every start. Then the engine must be kept running while the seat and fenders are flipped back down.

It is generally well-known in the Honda ATC community that the stock Honda ATC 250R front and rear suspension is nothing to get too excited about. By modern standards, the components are small and flexy with limited travel for a truly fast three-wheeler. Rath has built enough racing-performance ATCs to know exactly what parts to put on his go-fast machines to give them a supple ride. Rath Racing milled a set of triple clamps from aluminum billet to hold a WP 48mm dirt bike front fork, along with an anti-vibration handlebar mount. Believe us, the CR500R engine needs any anti-vibration mitigation that is possible to find.

Rath prefers the WP fork for the smooth ride and the way it soaks up small bumps, but the fork isn’t cheap, and it doesn’t jump right on the ATC, either. In addition to the custom triple clamps, it required a custom front axle and a billet front hub.

LONG IN THE BACK

We were pleased to see that the stock swingarm was upgraded to a brand-new Rath MX swingarm that is 2 inches longer than stock. We might have gone even longer than 2 inches. A longer wheelbase goes a long way when you need to handle more horsepower and torque. A PEP shock was selected to handle the suspension chores in the rear. There are not a lot of stock parts used in Black Beauty’s rear section.

The upgrades start with a LoneStar Racing (LSR) Axcalibar racing axle. It is mounted in a twin-row bearing carrier from Baldwin Motorsports and secured in the swingarm with an LSR billet anti-fade nut. A new rotor, a modern Honda TRX450R rear caliper and Rebel Gears sprockets establish the middle of the axle. A D.I.D chain gets the power to the rear axle in good order.

At the ends of the axle are LSR billet rear hubs. DWT wheels have been the preferred choice for ATCs since the machines were new. For Black Beauty, DWT Racing G3 beadlock rear rims in 9×8 were selected with a DWT G2 10×5 rim up front. Those rims were surrounded by ITP’s Holeshot XCR sport tires. XCR’s 6-ply design offers a tough tire that is still light, and they are lower profile than ITP’s XC or XCT models. The low profile should make controlling the 500cc power a bit easier.

When the ATC 250R was new, the stock pegs were so innovative that the design was patented to keep other Japanese brands from copying them. That was then, and we have learned a lot. Rath upgraded the foot area with Rath Monster pegs surrounded with the added safety of Pro Peg nerf bars. The handlebar was brought up to modern standards with a Fly Racing tapered Aero handlebar and a Works Connection clutch perch.

Black Beauty is a classic novel told from the horse’s perspective. The novel relates to this ATC in more ways than it being mostly black and a beauty. This 1985 ATC was treated poorly, not maintained, taken apart and left to rot. Hitt found pieces of the old machine and wanted to bring it beyond its previous majesty by introducing a Honda CR500 engine, adding advanced suspension, and making it more breathtaking and boisterous than ever before. If he was going through all that trouble, Hitt wanted it to have knockout looks as well. Finally, the machine gained the right treatment it deserved.

If you remember that pile of parts that Hitt dropped off for Rath Racing, there wasn’t much more than a frame and engine. So far, we have read about the Rath boys building up the rolling chassis with the big-bore engine. The outside was wrapped up, literally, by Maier Motorsports plastic. Maier produces the ATC 250R rear fenders, front fender and radiator scoops.

Bare plastic wouldn’t do, so a 75 Designs custom graphics kit spiffed up the looks of the bare black with, well, more black and some white for all of the numbers and letters. Fourwerx Carbon is the source of the black non-slip seat cover.

When you are building a complete machine from unrelated parts, there are unending little parts that come up missing. Anything that Hitt didn’t already have required a search for rare and vintage parts. Many were tricky to find. A lot were sourced online from eBay and other sites. All the fabrication, parts search and final assembly took four to five months to finish. Slowly but surely the final machine came to life as a complete racer.

There probably aren’t many off-road enthusiasts out there that even dream of building something as over the top as a CR500R-powered ATC 250R. Fewer still are contemplating how to make it happen. It is truly rare to make one happen—to plan the build, find the parts, enlist a wizard to shepherd it to reality, and finally pay the final bill and take it home. Shane Hitt is obviously a dedicated adrenaline addict, but now he has a permanent fix. 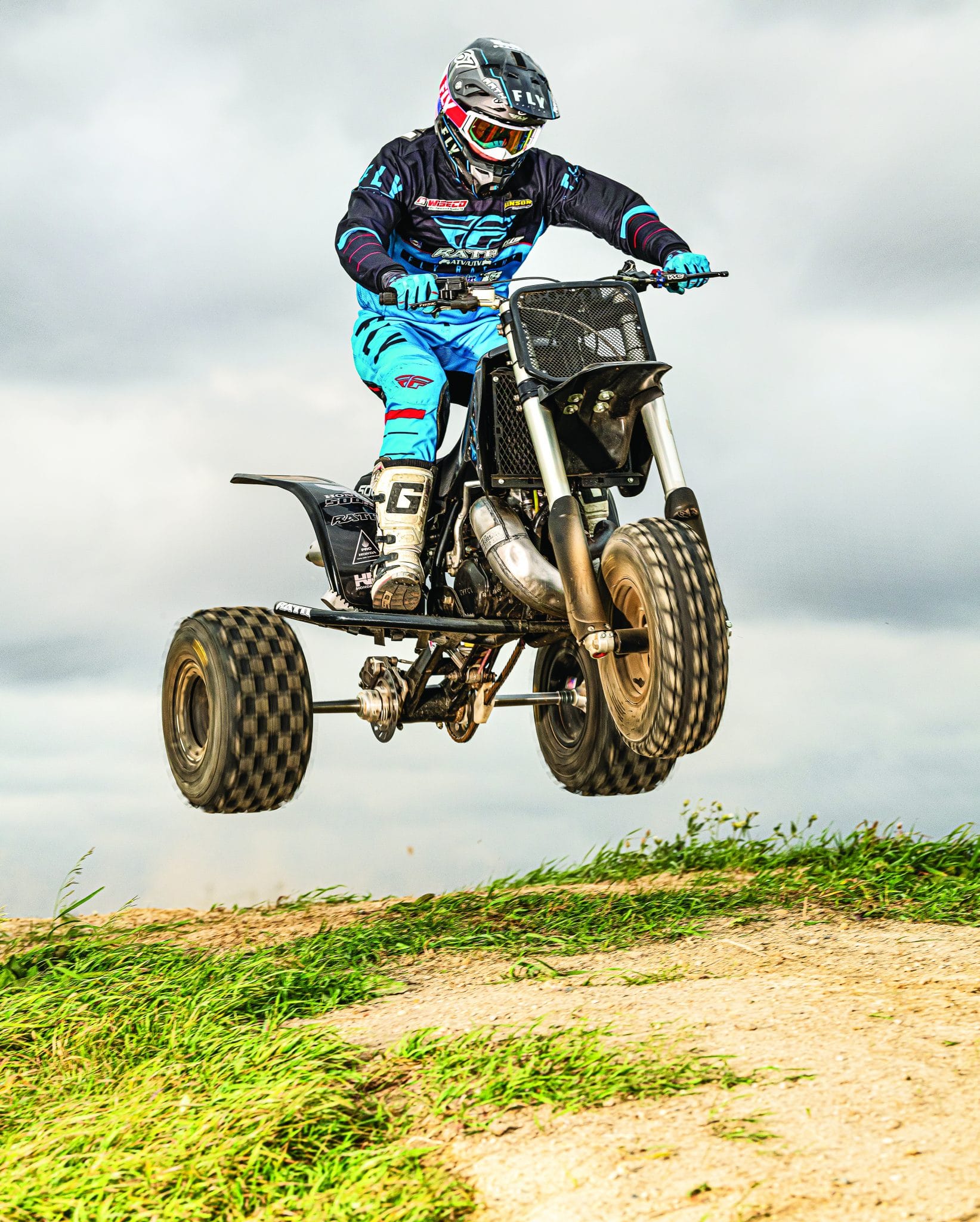 WHAT IS A BIRD 3-WHEELED MINI BIKE