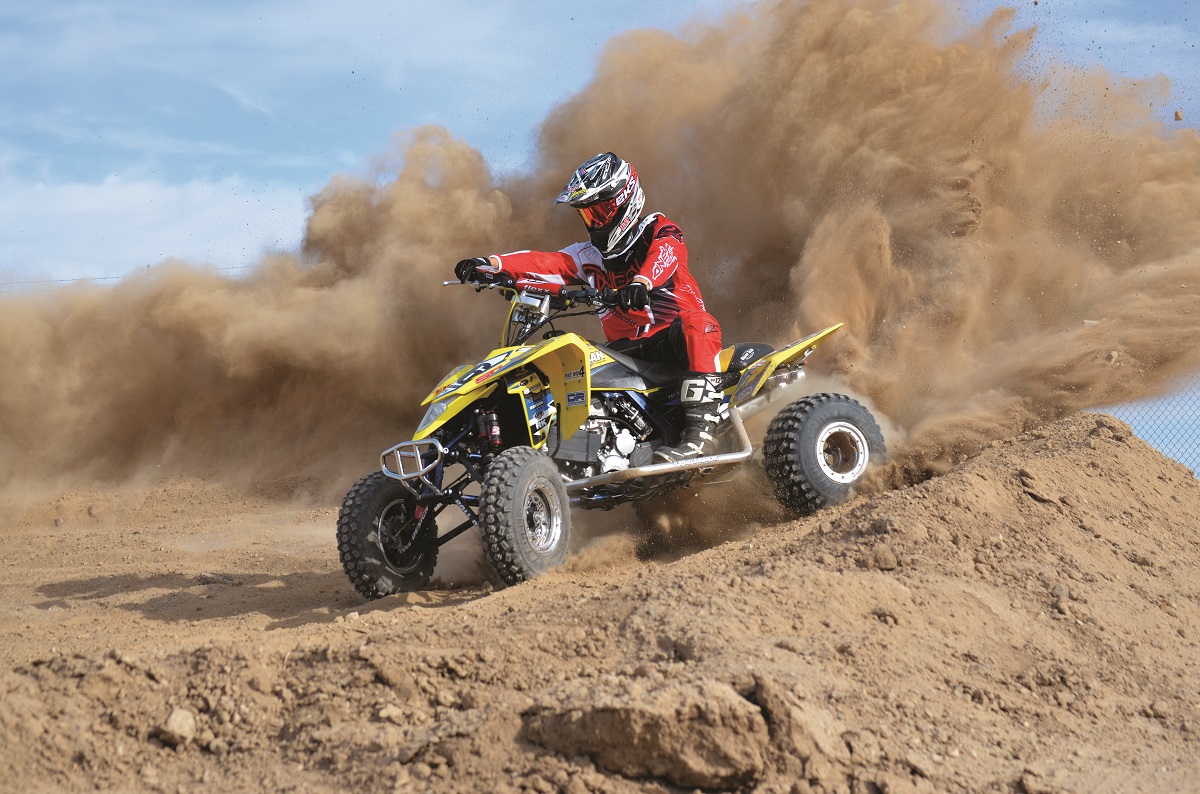 Back in 2005 and 2006 when the sport quad industry was booming, every manufacturer was in a race to come up with the best performance 450 around. First was Yamaha, and then came Honda with their trailready 450s. Suzuki shocked the industry by coming out with the first production sport ATV with a 50-inch-wide stance that meant the machine was track-ready. Suzuki built this machine with the help of industry experts like Wayne Hinson and racer Doug Gust. With its release in 2006, the LT-R450 quickly became the quad amateurs and pros wanted to ride. 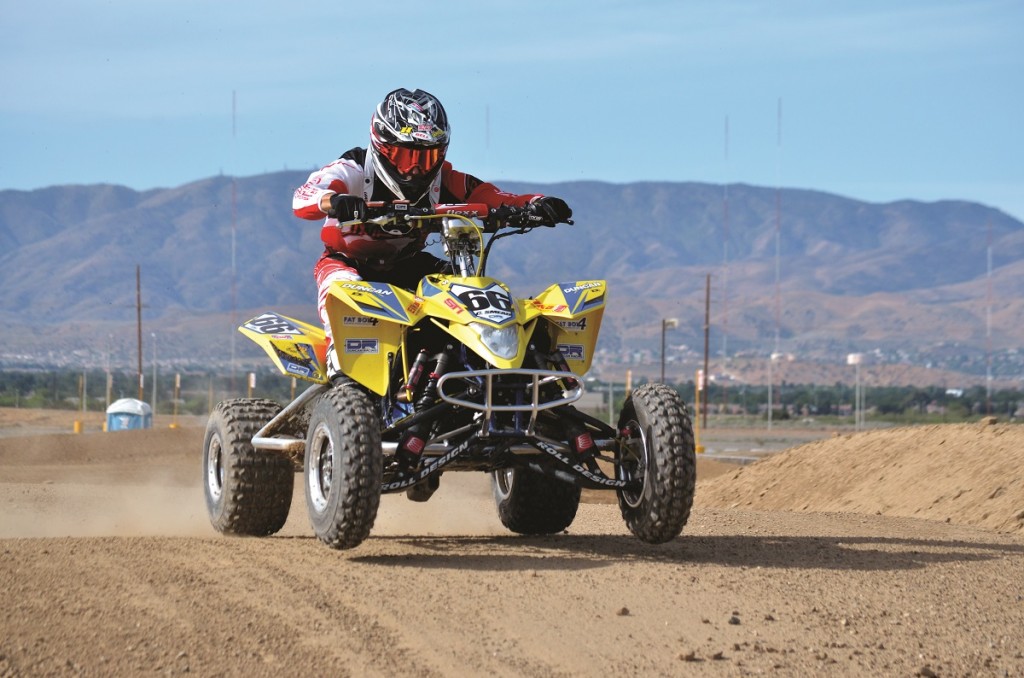 However, due to a bad economy, the last Suzuki LT-R450 rolled off the assembly line in 2009. The industry was in such bad shape at this point that Suzuki didn’t produce any ATVs the following year, and the LT-R450 has never returned. In the quick three-year run, Suzuki produced a ton of LT-R450s, and many are still for sale cheap on the used market to everyone’s benefit.

We like this quad so much, we purchased our 2008 test unit and have held on to it. Since then, we have used it in shootouts against the current Yamaha YFZ450R and done multiple projects with it, including building a narrow-woods version. That quad was probably the reason Chris Borich switched to the Suzuki in the first place and became so dominate, winning six championships on the QuadRacer. More dominance at the controls of this machine can be found in the record books for 2008 and 2009 when Dustin Wimmer won back-toback ATVA MX championships with the machine, and then teammate Josh Creamer took the national crown in 2010 aboard a Suzuki. 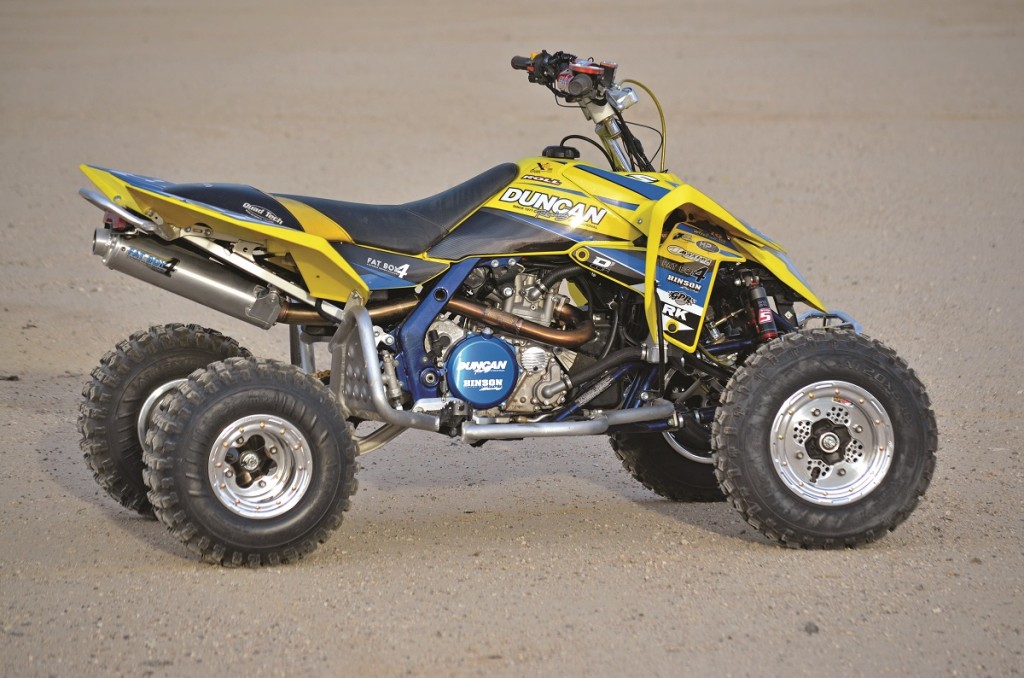 PROJECT RESTORE
According to the Kelley Blue Book (www.kbb.com), a 2009 LT-R450 is still worth $3800. Fortunately, you can find these machines used but in great condition on websites like Craigslist for even less than that price. For our latest project Suzuki, we wanted to update the machine in the suspension department and add a few engine products to help power performance as well. We didn’t want to spend as much money as, say, a new YFZ450 or even a Honda. We like building on a budget, so you can follow along and do the same. 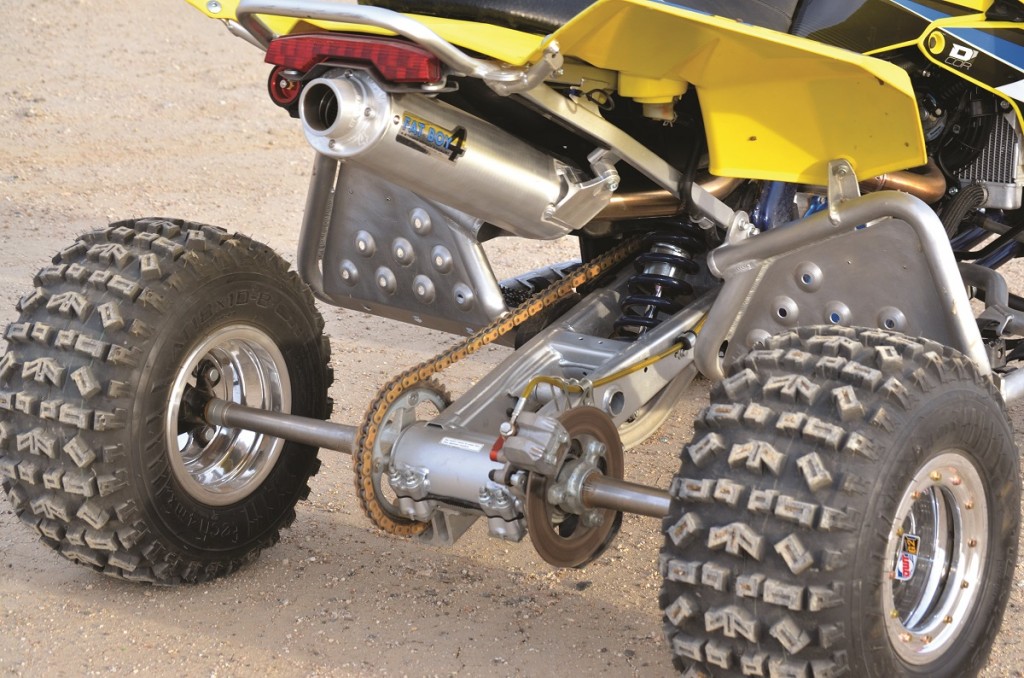 POWER UP
Our first concern was, what shape was the motor in? This machine doesn’t have a ton of hours on it, but we did want to make sure it wasn’t ready to explode. To do the engine inspection, we called on Duncan Racing for some help. They performed a head-leak-down and compression test. That $300 test showed all the motor needed was a quick valve adjustment and it was good. In adjusting the valves, they checked the cam timing and the condition of the valve train and all was good. The service included an oil change as well. Duncan also has instructions on their website (www.duncanracing .com) to perform the tests yourself, as well as guidelines to know if more in-depth service is needed.

Outside the engine Duncan added a few components that both let more air in and more air out of the combustion chamber, along with an electronic piece to manage the fuel flow and ignition timing. On the intake side, the stock filter was replaced by a complete $149 Pro Design air-filter setup. This is a new, washable, highflow foam filter that clamps on to a billet-aluminum plate bolted to the airbox. Better airflow along with better air sealing are important keys to engine life and performance. On the exhaust side, a $649 Duncan Fat Boy 4 complete exhaust system was bolted on under the seat. It’s a little louder than other pipes we have had on this quad, but not too loud for racing. To manage the fuel system and ignition timing, Duncan has a bit of a secret. They are the exclusive U.S. distributor of the Vortex ignition. This magic box will allow you to manipulate fuel flow and ignition timing at your fingertips without using a computer. It’s advanced yet simple. Guys like Chad Wienen and Chris Borich have been relying on this product for years. It’s so good, many of the top Supercross dirt bike riders use it as well. For our Suzuki, Duncan installed it under the front bodywork and gave us a mild (safe) tune that suits us well. The $699 Vortex does have a toggle-switch option that allows you to make major changes on the fly if needed. For instance, you could have one map in for starts and then change the map at the flip of a switch for the rest of the track. Or, you could set your quad up for woods with a mild tune and change it quickly when it’s time to drag race your buddies. For us, the power was strong but not a handful. You could feel the hook-up and power increases over just a pipe for sure. At the seat of the pants, we could feel a 10-percent power increase if not more. 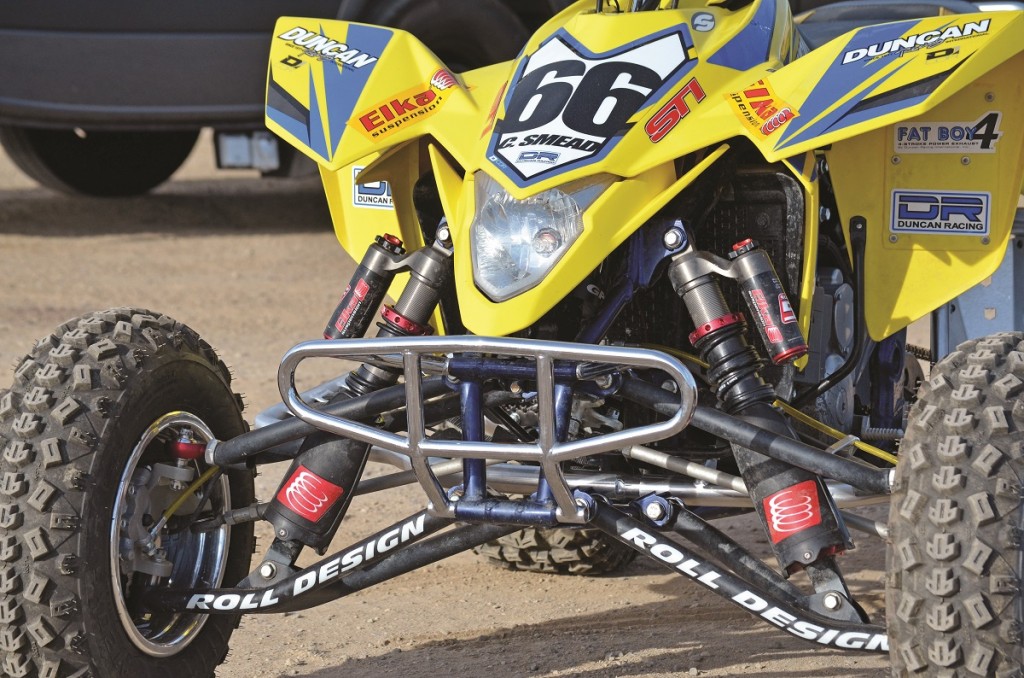 SUSPENSION
Since our very first test of the LT-R450, we have complained about the suspension, especially up front. It was rough to ride, unless you rode very aggressively at all times. In stock trim there is no low-speed compression adjustments, so small chop and braking bumps are brutal. Fortunately, that’s about the only thing we ever complained about on the machine. To solve this problem, we installed a set of Roll Design A-arms. This, along with new shocks, is probably the single best improvement you can make to any LT-R450. The new set of long-travel A-arms sells for $1400 and can’t accept the stock shocks. For this project we used Elka’s Stage 5 at both ends; however, we left the rear swingarm stock. The front shocks sell for $1699 a pair, and the rear goes for $1299. These are top-of-the-line Elkas with all the bells and whistles. The rear shock has a huge 46mm body, and all three shocks have easy-to-use high- and low-speed compression adjusters, rebound and preload. Elka does have shocks that fit the stock A-arms as well. Our stock A-arms were so hammered after seven years of abuse, the upgrade to Roll products was an easy choice. After dialing in the suspension, we took the refurbished quad to a local dirt-series race. Our editor, Cain Smead, entered it in the race. As pure coincidence, his closest competitor was also on an LT-R450. This quad had stock suspension. It was easy to see how well the Roll/Elka setup performed over the stock stuff. 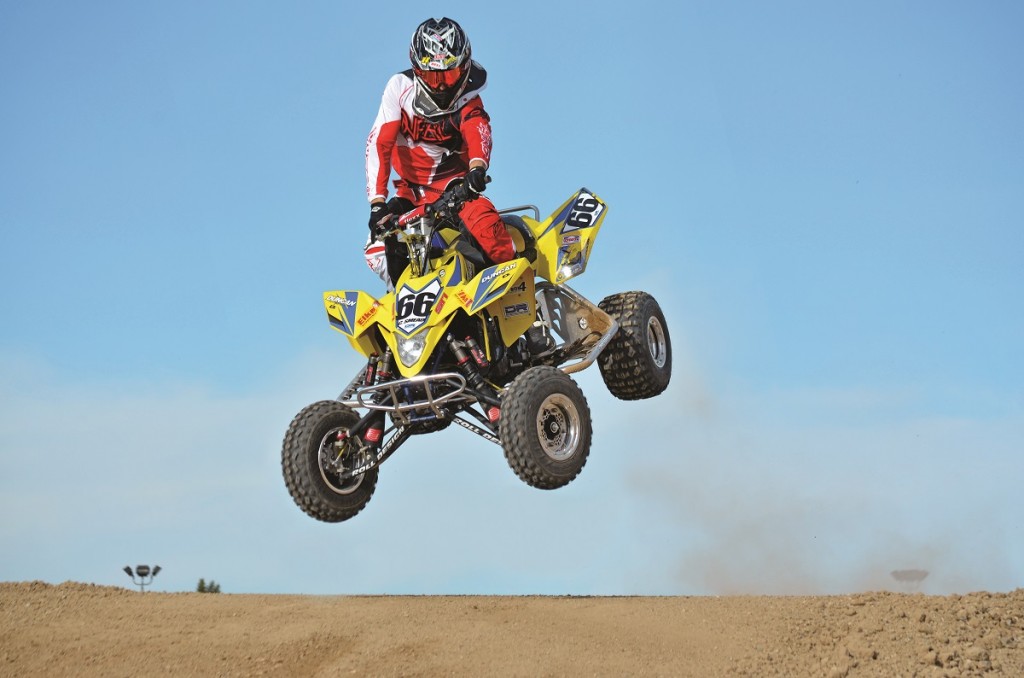 The other rider was clearing some bigger jumps and gained on Cain in several sections, but when it was time to hit the whoops, Cain pulled away with ease and actually made most of his passes there. After the race, the guy with the stock setup was dead tired, while Cain felt fine. In rough corners, the stock shocks are really jarring, and the Elka Roll setup literally “rolls” right through the bumps. The landing off jumps, too, is harsh with the stock equipment and not with our new setup. Since the race, we have increased the compression clickers just past the halfway point and made them perfect for every portion of our test track (www.avmotoplex.com). The suspension soaks up G-outs, as well as flat landing on the huge tabletops the track has. A little more bump absorption is provided by the Roll Plus 2-inch antivibe steering stem and a set of Fasst Co. Flexx handlebars. Finally, under those bars, we clamped on GPR’s latest ATV stabilizer. Any kind of weird side hits or crossed-up landing was controlled by that stabilizer. Under normal conditions you don’t even know it’s on there; however, we are glad it is when we need it. 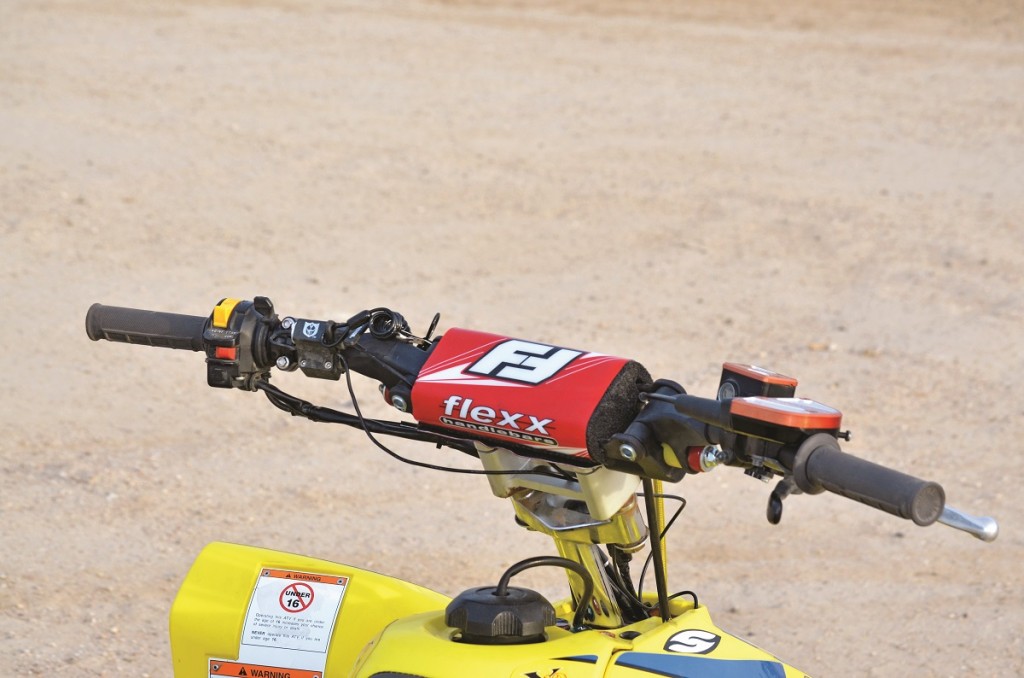 EXTRAS
For a little more comfort we added a very smooth-operating Works Connection clutch perch and lever, along with a set of Streamline brake lines. For traction we wrapped a set of 18-inch (rear) STI MX tires onto four polished Douglas beadlock wheels. The tires hooked up very well under acceleration and even better under braking. Side traction is very predictable. All you need is a little cushion of dirt and you can rail turns like a go-kart. The STI/Douglas combo worked, as well as the Roll/ Elka combo.

At our rider’s feet, we swapped out our old, custom-narrowed Pro Armor nerf bar setup we used on the old woods project for their latest set of MX nerfs that come with attached heel guards and very aggressive footpegs. The whole setup sells for $429, bolts up quickly and provides a very stable platform for the rider to stand on.

To cap off the project, Duncan installed their signature chrome front bumper up front and wrapped the bodywork with a new graphics kit from D’Cor. Duncan sells D’Cor graphics for all brand sport quads. Our old Quad Tech seat cover is holding up well, but the color is fading. We will be ordering a cover from the new owners of Quad Tech soon and let you know how it turns out. 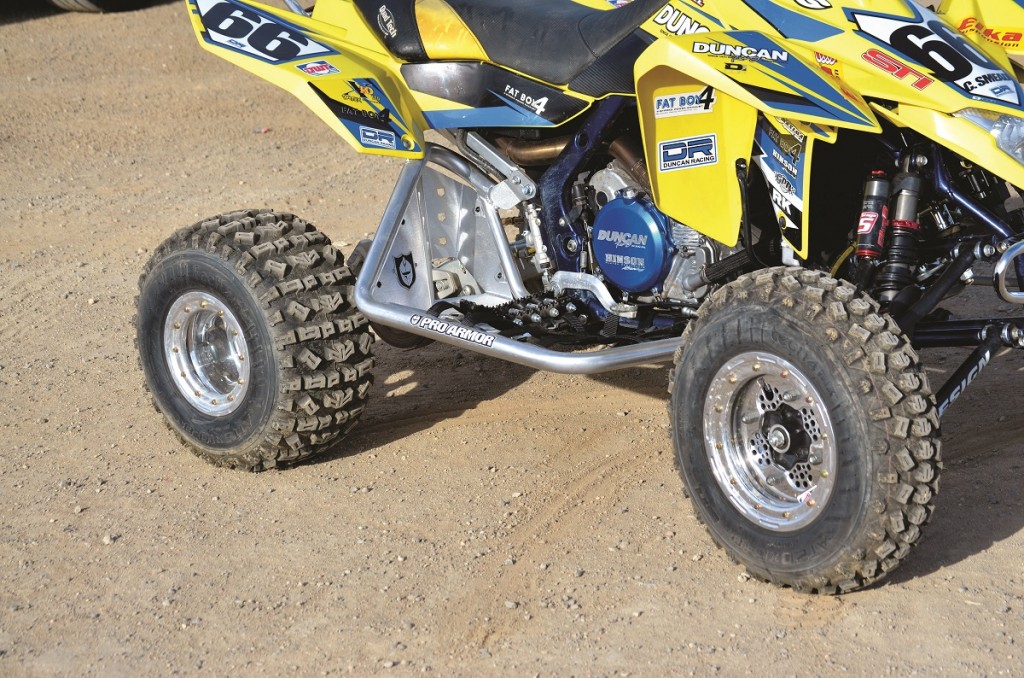 If you have been hanging on to an older quad like this, spending a little money in the right places can make your old ride feel better than new. With Duncan Racing doing the engine tune-up and adding a free-flowing intake exhaust and engine management, the power is more perfect for us than with an expensive race motor. The suspension upgrades are something we have been wanting to do for a long time, and the Elka Roll products worked so good, we couldn’t ask for anything better.

Duncan Racing is a full-service engine shop that can build complete quads like this LT-R450 or any brand machine for the dunes, the woods or the racetrack. Give them a call at (619) 258-6306 or browse their website at www.duncanracing.com for all kinds of helpful tips and amazing go-fast products.