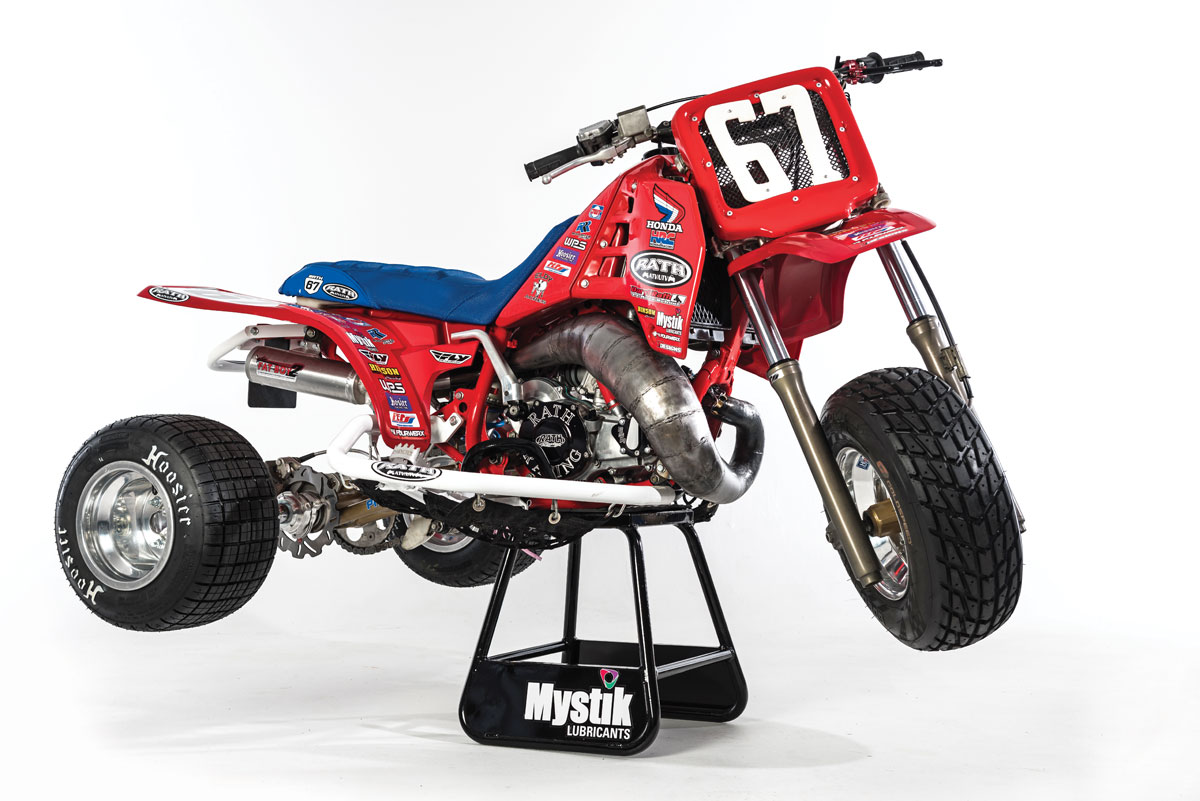 Back in the ’80s ATC racing was at its prime, and one competitor was Daryl Rath. Daryl now owns Rath Racing, where he builds aftermarket parts like nerf bars, bumpers, footpegs and more for ATVs, ATCs and UTVs. Once the ATC fell off of the Honda production line, Daryl stopped racing three-wheeled machines and stuck with quads and UTVs. After all those years Rath decided it was time to build an awesome Honda ATC250R to once again shred on the TT tracks. He pulled down his old number plates from the wall of his shop that once were mounted to his racing ATC in the ’80s and prepared his old but very new machine to mount them on.

POWER PARTS
The two-stroke engine was utilized in almost every racing ATC back in the 1980s until four-stroke engines began to make their appearance. Daryl found a 1985 Honda ATC250R and began modifying the whole bike, starting with the powerplant. Rath had CT Racing massage the cylinder porting and polished the head for $425. VP C12 race fuel must now be used in the Honda Short Course tank that is designed to let the handlebars turn further than stock. To provide the right flow of fuel to the engine is a Keihin PWK 38mm carburetor. A $48 K&N air filter was installed without an airbox to allow the maximum amount of airflow to the motor. To help the fuel and air mix is a $180 Boyesen Rad Valve reed cage with an NGK spark plug to create combustion.

To expel exhaust gases, Daryl installed a Kenny Robert hand cone header pipe, which is hand-built and tuned specifically for the Honda’s engine. A $180 Duncan Racing Fat Boy silencer finishes off the exhaust system of the 250R. 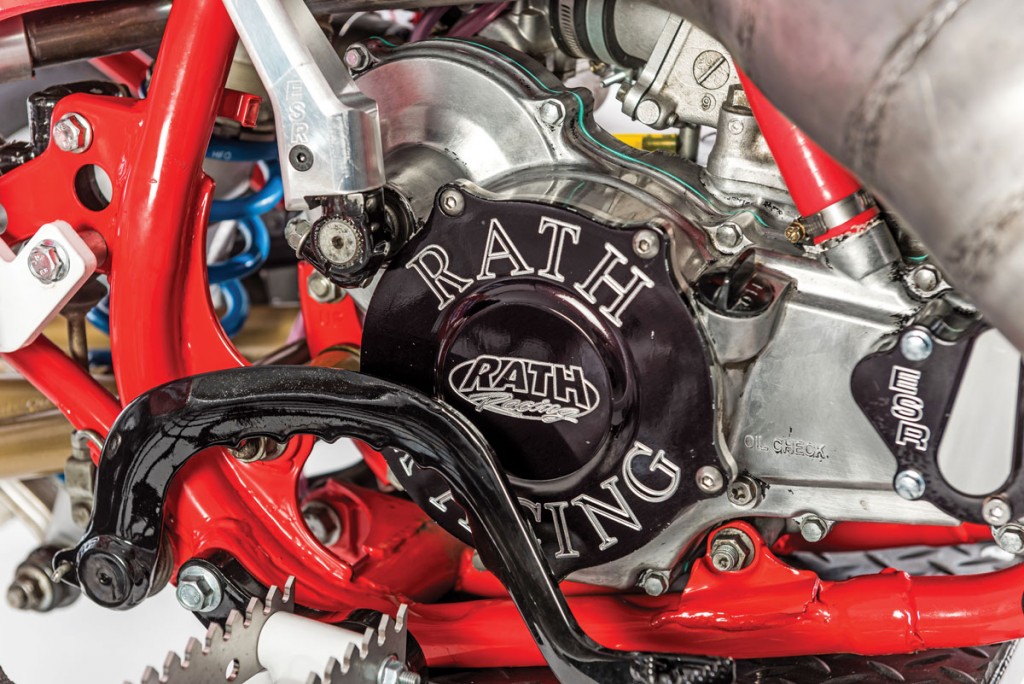 Mystic Lubricants oil keeps the transmission working properly. A Hinson clutch system was installed on Rath’s 250R that has a much smoother and stronger operation than the stocker. Daryl then installed Rebel sprockets with a WPS O-ring chain to provide the power from the engine directly to the rear wheels. The gearing he chose to go with was 14/36, which was picked out for short-course TT racing and increases acceleration instead of top-end speed. 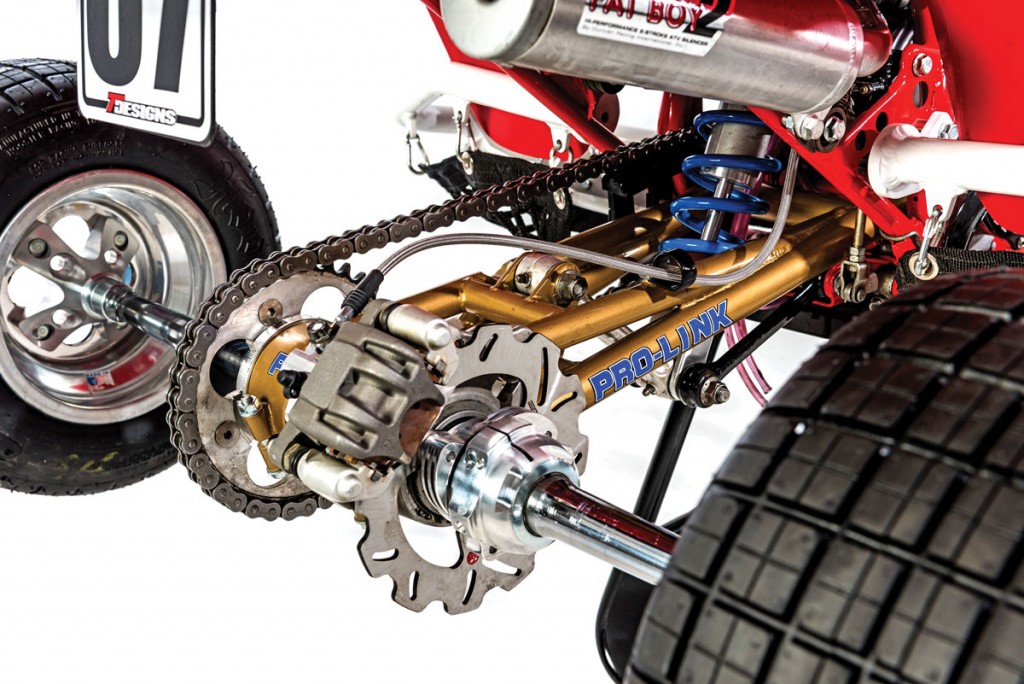 SUSPENSION AND HANDLING
Suspension is one of the most important components on any machine; however, you don’t always need to go buy an aftermarket setup. The front forks on this 250R just needed a re-valve, and Rath sent them to PEP to be set up and shortened to only have 7 inches of travel. A DEM rear shock was installed on the Honda that was also modified by PEP to have only 7 inches of rear-wheel travel. On a TT racecourse there aren’t many big jumps, so suspension can be set lower, which vastly helps with cornering speeds. A +.5-inch Rath TT swingarm was installed, along with a Lonestar Racing axle, PRP carrier and LSR anti-fade hubs. Not only are all of these parts lighter than stock, they provide more rear-end control in corners and over rough sections on the track.

Traction is important in racing, and the TT tires are not designed to be taken anywhere but hardpacked clay tracks. A Goldspeed front tire measuring 20×5.5-10 and Hoosier rear tires sized 15×8-8 keep the Rath ATC250R pointing in the right direction. The tires run on DWT wheels. Braking is done by the stock front braking system off of the 250R, while the rear brakes were converted to a TRX450R rear caliper, with a 450R master cylinder also utilized on the system. PEP and Rath brake lines were used on this machine with Maxima 550 Boiling Point fluid.

As far as hand controls go, Mika handlebars are used with a CR Hi Bend to them. The thumb throttle is stock, as well as the cables, but the clutch lever and perch came from Works Connection. Rath Signature Series nerf bars made it onto Daryl’s Honda with his monster peg that gives you an insane amount of foot traction and the ability to place your foot on the peg right up to the edges of the nerf bars.

Daryl installed a Fourwerx Carbon seat cover onto the stock seat foam after cutting down the foam nearest the tank. He did this to make it easier to move from each side of the bike quicker and easier when cornering. The seat cover has ribs on the back section of it. Rath uses the ribs to measure out how far back to sit for starts. Depending on the traction of how the TT tracks dirt, he can quickly decide exactly where to sit on his ATC to get a holeshot. 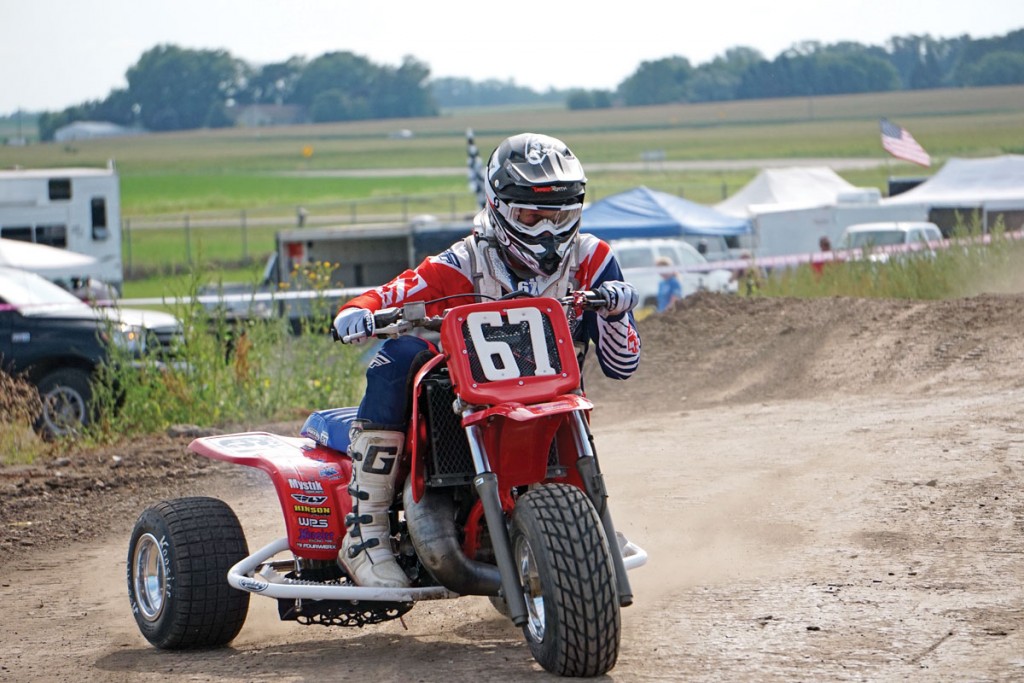 THE RIDE
In the ’80s ATCs spent a lot of time racing on TT (Tourist Trophy) tracks, which are a mixture of flat track and motocross racing. The courses are generally made with hardpack clay with flat, banked and off-camber turns that you must pitch the rear of an ATC sideways to go through quickly. There are whoops and jumps, but generally they aren’t as big as ones you will find on dirt motocross tracks. The pace is fast during these high-speed races. The engine of Rath’s Honda pulls hard in the midrange, which is where most of the power is needed. Even though the engine has been built up to have a lot more power, it’s easy to control and utilize around the track. Even though the front and rear suspension were shortened to 7 inches of wheel travel, the bike rarely ever bottomed out and handled well over the jumps. In corners the ATC was very easy to flick sideways and begin its powered slide out of the turn. Daryl’s ATC250R now only weighs 277 pounds, which is 16 pounds lighter than stock, and makes it easier to maneuver around the track with less stress on your body. That translates to faster lap times.

FINAL THOUGHTS
The technology we have out nowadays wasn’t available back in the 1980s. Aftermarket parts are stronger and lighter than ever before, and new innovations are frequently getting released. Even though three-wheeled off-road machines may seem like a thing of the past, a lot of aftermarket part companies still provide components for these vehicles. Rath Racing is one of those companies, and Daryl Rath has been a part of the off-road racing industry for years. He has already been racing his old yet very new Honda ATC250R. 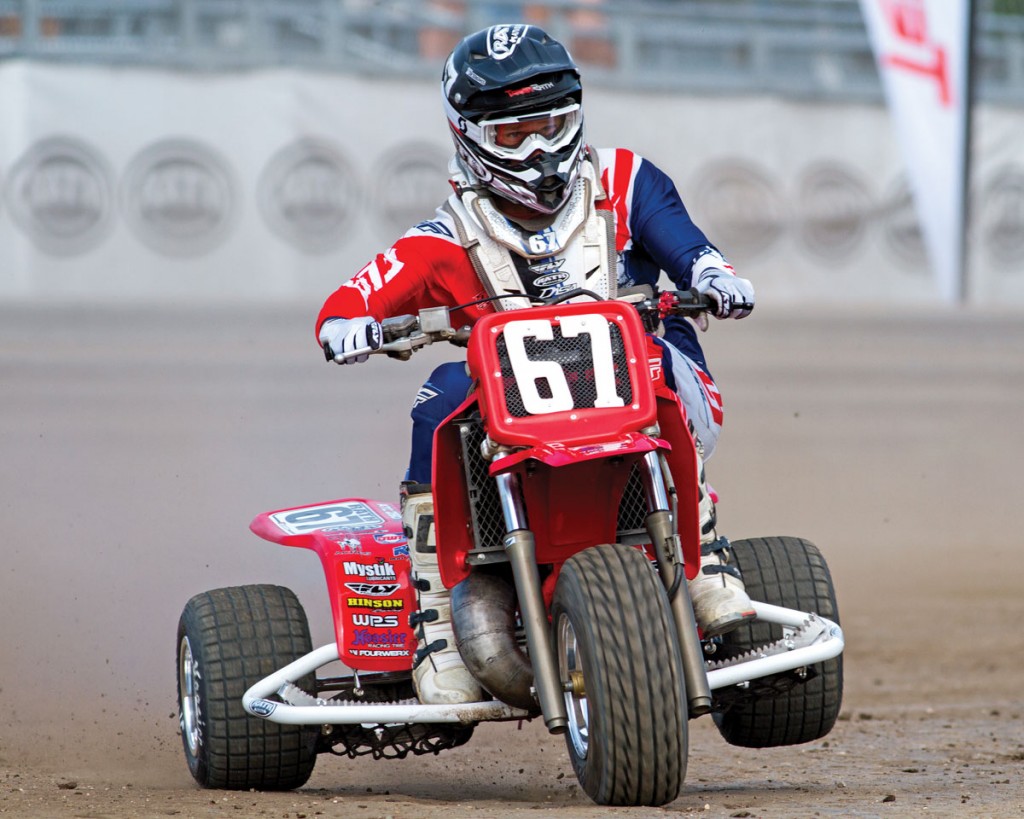