Honda’s 1985 and 1986 ATC250R is arguably the greatest high-performance three-wheeler produced by a major manufacturer. Originally released as the first mass-produced high-performance ATV in 1981, the 1985–1986 Honda ATC250R represented the machine’s third complete redesign in only five years. For a racer or highly experienced rider, it had a capable 246cc, water-cooled, two-stroke engine with lots of hidden potential for a skilled motor builder. While its engine was good, it was the 250R’s suspension, handling, durability, and attention to detail that really set it apart from its competitors. Due to the banning of new three-wheeler sales in 1987, the ATC250R never received the accolades of its four-wheeled descendant, the legendary TRX250R, with which it shared much of its engine and rear suspension design. 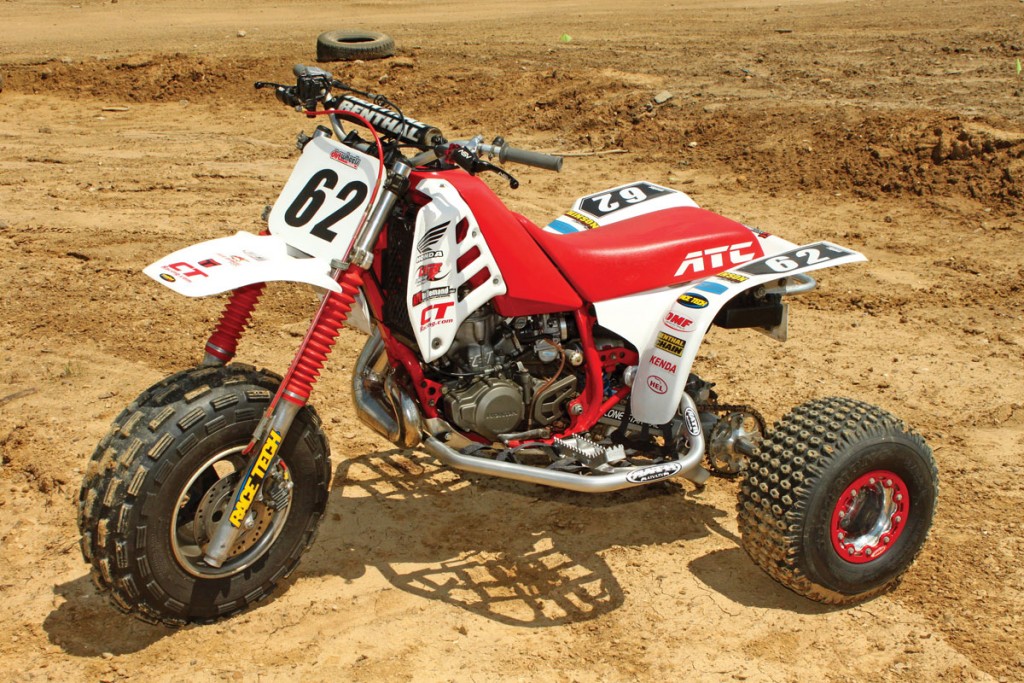 REBUILDING A CLASSIC
The rebirth of this 250R began with a complete tear-down. The frame was inspected for cracks and was repainted Honda red. Next, a Lone Star Racing 4130 chromoly swingarm replaced the stock swingarm. It comes complete with new needle bearings and works with the R’s other stock hardware. The stock swingarm features single-carrier pinch bolts on either side of the rear, compared to the twin pinch bolts found on either side of the LSR swingarm, reducing carrier twisting and strengthening an area where the stock swingarms commonly cracked.

Upon disassembly, we noticed that the stock axle carrier had a crack in it. It was replaced with a Lone Star Racing billet bearing housing. It’s constructed of 6061 billet aluminum and comes with heavy-duty twin-row bearings already installed. To gain the width, stability and strength needed for motocross, a LSR Axcaliber Pro Racing axle was installed. It allows up to 3 inches of width adjustment for different track conditions, giving this machine a maxed-out 50-inch width, the maximum width allowed at most ATV motocross events. The Axcaliber comes with new hardware, including a trick billet axle hub that’s covered by a true lifetime warranty. 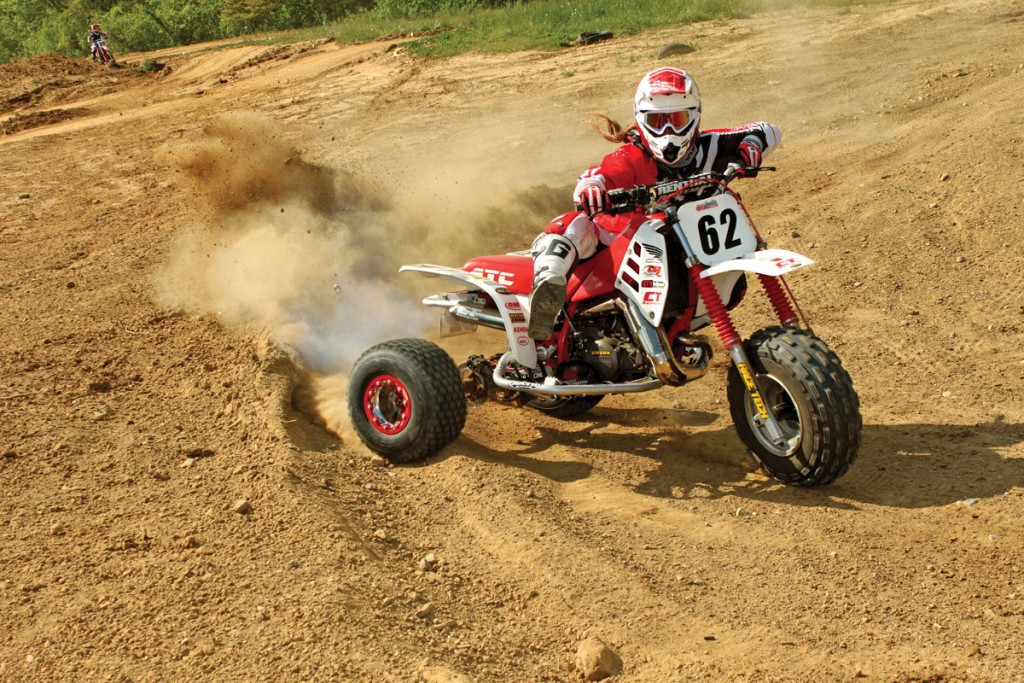 FASTER THAN FACTORY HONDA
CT Racing has been building national-winning Honda 250Rs since these machines were being sold new in dealerships three decades ago. Owner Allen Knowles, a former pro three-wheeler racer himself, felt a well-built 250cc engine produces all the power a trike racer could make use of for motocross. While power valves were big in the late years of the two-stroke quad scene, Allen felt that the harder-hitting nature of a non-power-valve-equipped two-stroke is better suited for breaking the rear end loose for sliding through turns, the only way to go fast on a three-wheeler. With plans for big power gains out of the top end, CT replaced the aging stock crank with a brand-new Hot Rods crankshaft, designed for the 1987–1989 TRX250R. CT likes the longer rod on this crank for the ATC, used in conjunction with a spacer plate on the bottom of the cylinder. The advantage is a better rod angle, and with slower piston speeds at the top and bottom of the stroke, it allows more time to charge the ports, providing more torque and harder-hitting throttle response.

Next, the cylinder and head received CT’s National Porting package. The package includes porting and decking the cylinder, re-chambering the head, a modified LAPC piston and top-end gasket kit. CT focuses their porting efforts on gaining midrange power. This results in a power curve that is better from bottom to top, with a majority of its power increase where it’s most accessible. The decked cylinder and re-chambered head significantly boost compression, resulting in a substantial boost in low-end power and more power across the rpm range. This setup requires the use of race gas (100 octane minimum), but that’s the price you pay for making your Honda bark like a big dog.

On the intake side, the airbox lid was removed and a Uni foam filter was installed. Next, a Moto Tassinari V-Force reed valve system was installed, which substantially improves throttle response while increasing horsepower. CT swapped out the stock 34mm carburetor for a 38mm Keihn PWK, which they smooth-bored to maximize throttle response.

Finally, the ATC’s stock ignition system was swapped out for one from a mid-’90s CR250 dirt bike. The CR ignition was purchased used off of eBay for $65, saving some big money over purchasing new. This setup features a much lighter flywheel and different ignition curve, working with CT’s internal engine work and bolt-ons, dramatically enhancing the way the engine builds rpm. The only real drawback is that the engine can’t be lugged quite as low in the rpm, thanks to the reduced flywheel weight. This mod might not be ideal for the casual woods rider, but for a pro-caliber engine build, it helps the engine rip throughout the rpm range. 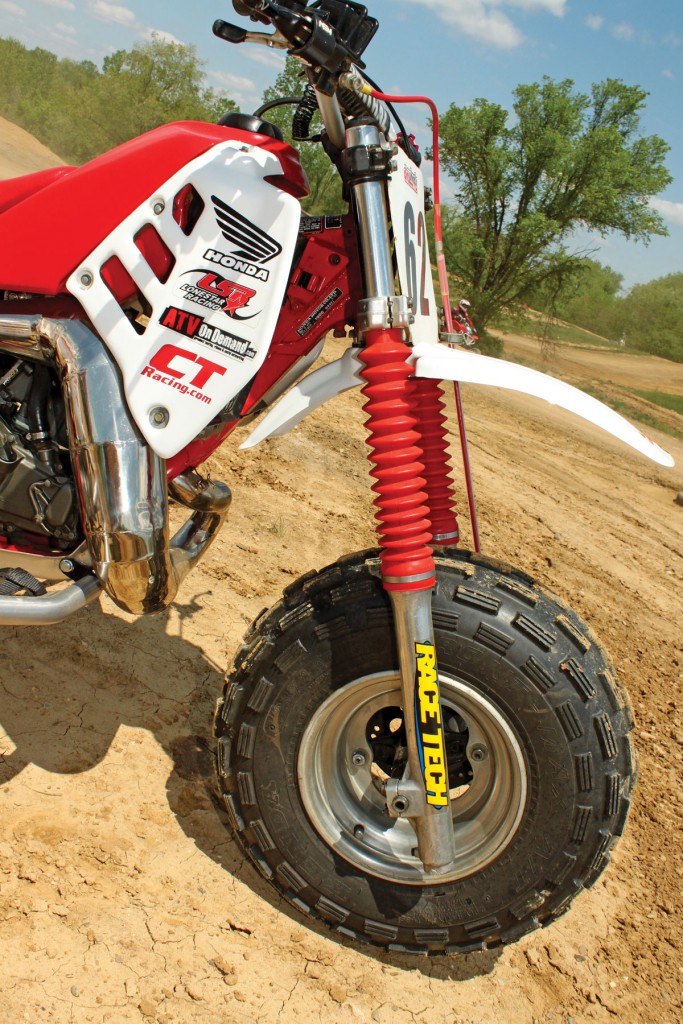 SUSPENSION
The suspension, while good in its day, needed some serious improvement in order to deal with the demands of a modern motocross track, the longer Lone Star swingarm, a pro-level motor build, and the quest to out-jump the competition. Thanks to the vintage and modern ATV suspension experts at Race Tech that was accomplished while keeping the 250R’s suspension truly vintage. 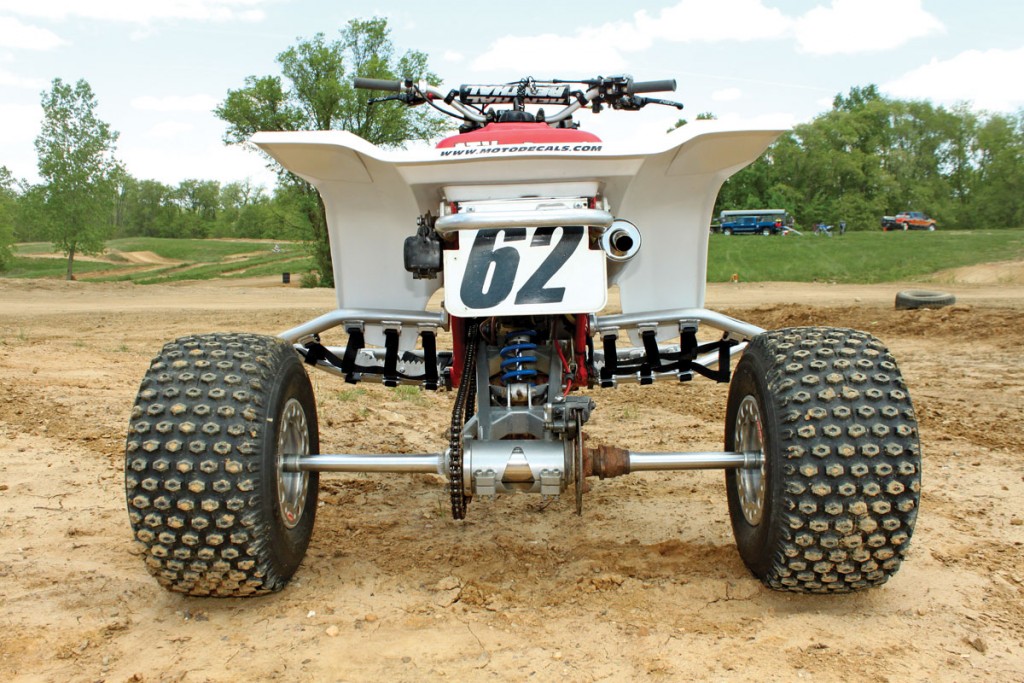 Race Tech installed its gold valve emulators to mimic the function of a cartridge fork, separating out the compression and rebound circuits, allowing them to be tuned individually. Race Tech’s stiffest fork springs were still a bit soft for the 250R, so they were swapped out for a set of Progressive Suspension’s progressive- rate fork springs, which start out plush but become much stiffer near the end of the travel. The rear shock’s piston was replaced with Race Tech’s high-flow gold valve piston, along with custom valving. The stock spring was replaced with a stiffer spring. Both ends received fresh fluid, and any worn items were replaced upon reassembly.

BRAKES
To make the R’s braking performance as crisp as its engine, the aging stock rubber brake lines were replaced with HEL USA brake lines. The steel-braided lines enhance brake power and feel, while various line and fitment color options let you customize the look of your machine. 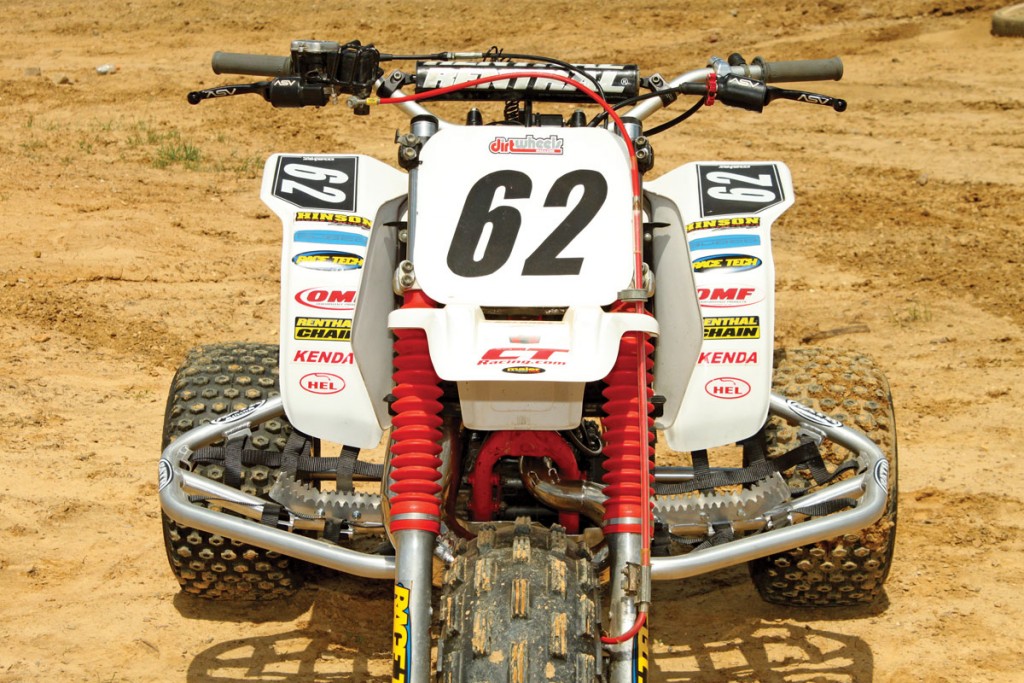 TIRES AND WHEELS
Kenda’s front Max and Scorpion rear tires have been around since the three-wheeler days. The 23×8-11 front is an uncommon size due to the 11-inch wheel diameter. These tires feature a harder rubber compound than modern motocross tires, which helps them slide easily and last. We went with 18×9.5-8s for a motocross-appropriate height and the narrowest possible width, again looking to make breaking the back end loose as easy as possible. OMF’s 8-inch billet-center beadlock wheels provide strength, security and appeal.

PLASTIC SURGERY
Maier Manufacturing offers plastic for many vintage and modern ATV applications. We acquired a set of white plastic, including front and rear fenders, radiator shrouds and a front number plate. The shine and fender fitment are on par with factory plastic. It’s claimed to hold up well to the elements and is proving to be pretty chemical- and scratch-resistant. 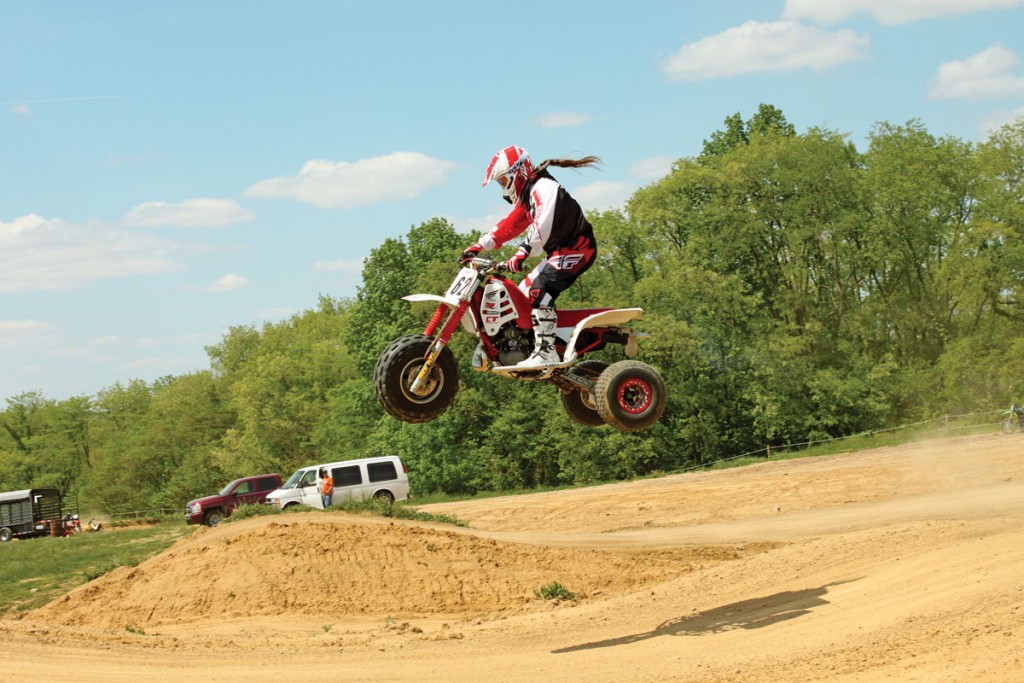 MODERNIZED CONTROLS
This ATC250R now has a modern-feeling cockpit. Renthal’s Vantage Desert handlebars provide the wide clamping area and tall height needed for the ATC. The narrow and dull stock footpegs were replaced with a set of recently released Rath Racing nerf bars. The pegs are wide and feature far superior grip and feel. 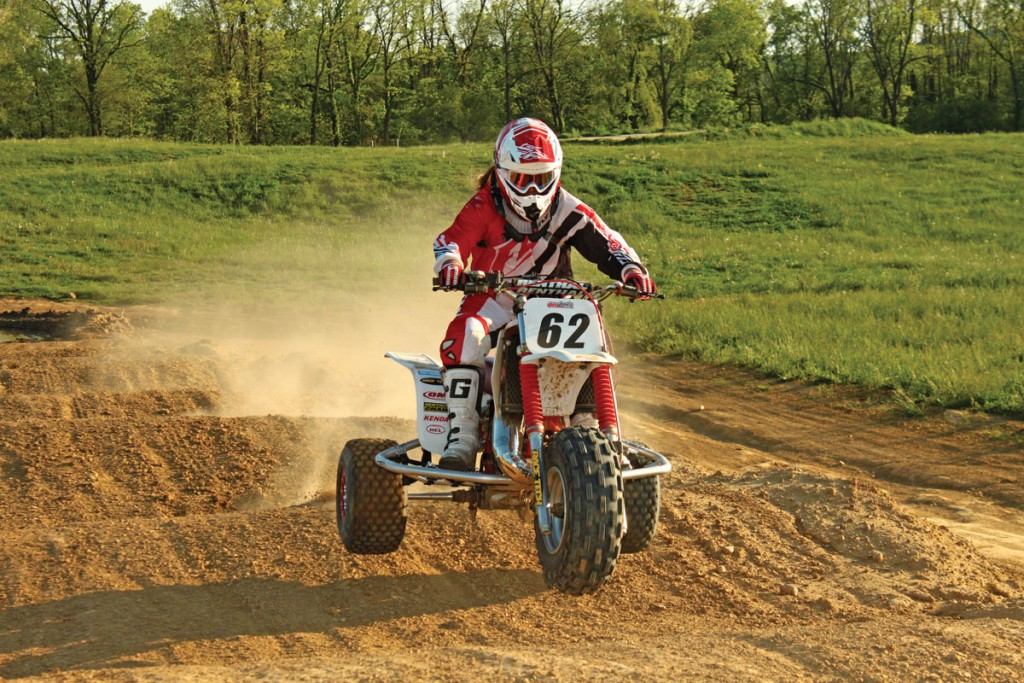 CONCLUSION
Like many vintage motorsports, buying and fixing up one of these old machines is fun and makes you part of a niche community of what we’ve found to be good-hearted, fun-loving enthusiasts. Having ridden this rare example of pristine performance, we can see why three-wheelers were so popular 30 years ago and why die-hard enthusiasts continue to maintain and enjoy them today. If you are looking to upgrade a specific part of your ATC250R, or if you would like to build a full-on vintage race machine like this one, all of the parts used to build up this machine are still being produced today.