Honda’s 300 (2WD & 4WD) has been one of the best workhorse ATVs of all time. For over ten years now, it has racked up an enviable sales and reliability record that is unmatched in the industry. But with the introduction of Honda’s Rancher line of ATVs in 2000, the 300 was put out to pasture and replaced with this more powerful and versatile 350cc 4-wheeler.

There are still legions of Honda 300 owners out there who love the spunky spirit and rugged performance of their 300s. Rather than buy a new machine, many of these loyalists prefer to install a performance package that will make their machines much more competitive with the newest machinery available.

One of the best places to find a better performing machine is in the heartland of severe ATV use. The southeastern United States has some of the toughest conditions you will encounter anywhere. Deep, sloppy mudholes that tax a 4×4’s power to the limit and cypress swamp-infested trails that reach out and grind any and all performance parts you care to install.

Thanks to the efforts of the good folks at High Lifter Products, we were able to try out one of their fully accessorized Honda 300 4x4s, which had been transformed into a 355 Honda Super Quad. This machine belonged to shop employee/test rider Jeff New­man and he had customized it to be a better all-around quad for use in riding conditions much more severe than most are likely to encounter.

HEART OF THE BEAST

“The heart of our Honda 300 engine kit is a new big-bore piston that we worked in conjunction with Wiseco Pistons to create, “ said Jeff. “It uses an 83mm high compression piston (10.25/1 compression ratio) which requires a new sleeve to be installed in the cylinder (designed for use by Advanced Sleeve).”

“By doing this we can up the displacement from a stock 282cc all the way up to 355cc. We thought about going even bigger like some of the other kits available on the market, but after reviewing some reliability and overheating problems, we opted to go as big as possible without having to install an oil cooler and drilling the case itself.”

When asked how difficult the installation was, Jeff replied, “It is easy for any engine mechanic to do, with no worries to go along after the installation is complete. Secondly, we knew we would need to get more lift and duration out of our valves, so we turned to Webb Cam for the answer.”

After discussing what we were looking for ( which was more low end and mid-range torque) in detail, Laurie Dunlap at Webb Cam recommended that a 40b-grind cam would do the trick. She was right,” 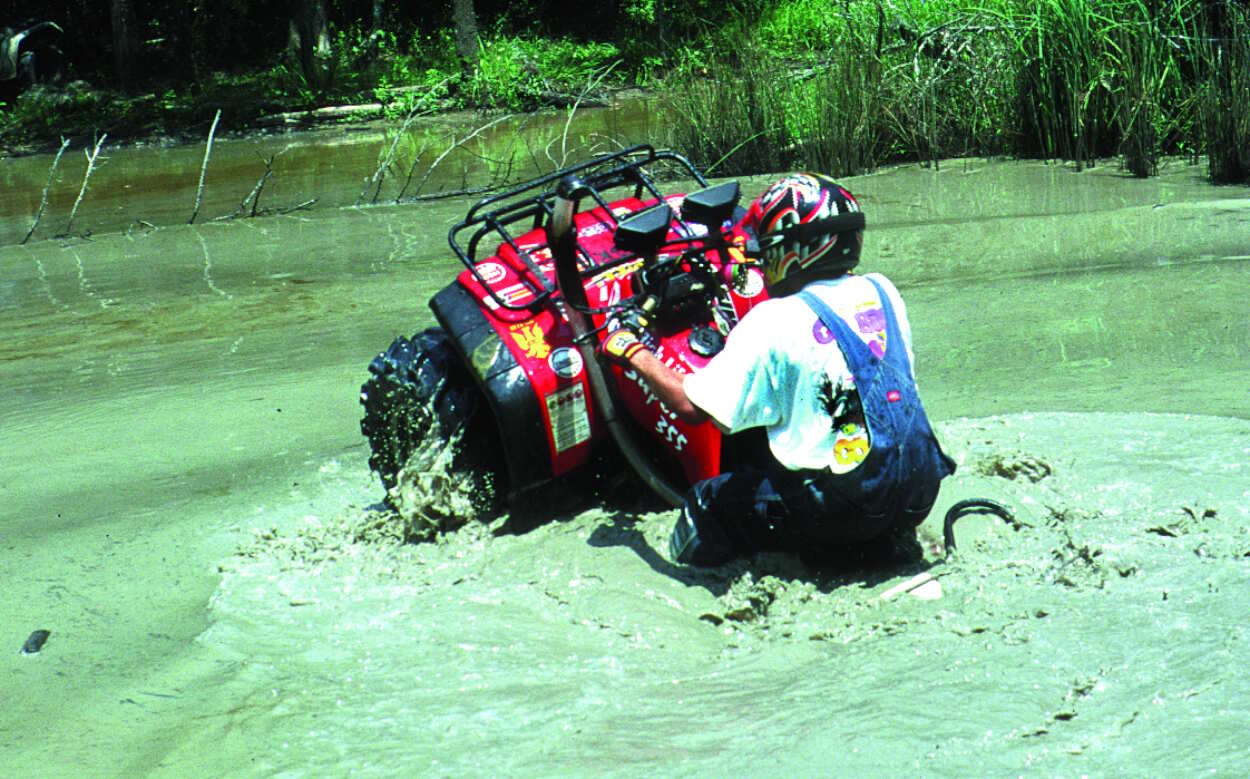 A new grind cam gave them the much needed extra torque in order to spin the larger mud tires High Lifter wanted to install with the kit. Stronger valve springs were required due to the .384 lift and a duration of 272°. The factory valve springs will not handle the lift and duration of this magnitude and would eventually float at high rpm.

A full head and base gasket kit from Cometic Gasket are also included in the piston and cam kit with the retail price being set at $380. High Lifter also recommends enlarging and polishing the intake and exhaust ports when installing this kit. This will allow the exhaust and fuel to flow much easier with less restriction and create additional horsepower.

This engine kit is perfect for any 300 owner who is looking to give his/her old tired motor a boost or for aggressive riders who want to add larger “mud” tires on their machine and have the power to pull them.

CHECKING IT OUT FOR OURSELVES

To see if Jeff’s claims were legitimate, we flew out to the badlands of Louisiana and took his Super 355 out for the acid test. We rode the machine through some of the gooiest, stickiest, and deepest mud we’ve ever encountered and found his setup to be everything he claimed it to be.

The kit is truly unbelievable. Even with the addition of the heavier Vampire mud tires, it had no problem tracking through the mud bogs we ran it through. There were no overheating problems and/or reliability problems throughout our test. We feel this is the perfect kit for anyone who is looking to wake up their 300 and see the maximum performance for a reasonable investment.

Here is a list of all the products that were installed on Jeff Newman’s Honda, High Lifter 355.