This is the second car that we have featured from Kombustion Motorsports, located in Murray, Utah. As a reminder, Kombustion is a full-service retail shop to source parts for your own build, or it can be a gateway to complete, turnkey builds. The first car was the monster rock-crawling four-seater owned by Kombustion CEO Ryan Flanders, a machine that was destined from the beginning to be a rolling catalog of the shop’s wares. This RZR XP 1000 is a different story. Kombustion tech Ryan Rose’s personal ride began as a Voodoo Blue 2015 model. Rose didn’t have the catalog-spree option, and the machine has continued to evolve and seen more changes since our outing. Rose mimicked the boss in one way—the motor is stock internally, and he concentrated on modifying other areas.

When we met up in Sand Hollow near Hurricane, Utah, the Kombustion crew had some customers along, and all of those builds started with RZR XP Turbo two-seaters. We asked Rose if driving with those guys was giving him the itch for a Turbo. “It would be nice to have a Turbo at times, but at this point,” he claimed, “it would take too much work to get a new car to the point where mine is. I would probably just install one of Kombustion’s turbo kits on my 1000.” You will see from the photos that Rose is not afraid to run the car hard, and the machine is street-legal in Utah. In 900 miles he has had a single failure: he lost the fuse for the EPS!

A two-seat RZR 1000 looks ready for action just sitting still, and Rose’s modified car is no different. As much as Rose was interested in performance, he rates many of the modifications as safety upgrades. Rose couldn’t find a cage that had the features he was looking for. Rather than go off the rack, he had Green’s Off-Road make a custom cage that included equally unique tall doors and an interesting split windshield filled with automotive-type glass. The windshield’s surround is quite large, and there is a rubber joint and a cage tube running through the center. We wondered if the surround would limit vision, but the view was crystal clear, and we had ample field of vision. The cage included a smooth roof and integrated mounts for the generic 40-inch LED light bar. Rose listed the light in his product list, but admits he doesn’t remember what the transplant from a previous car actually is. As a cage, roof, door and windshield package, it gives the car a unique look. Once you are in the car, it has a very secure feel. The spare wheel carrier isn’t part of the cage. It is an RSK item.

HOW WIDE IS TOO WIDE?

Like his boss Ryan Flanders, Ryan Rose went with the Reflex 8+ suspension kit. The kit includes wider axles, but the stock CV joints need to be swapped over. Rose plans to add SuperATV boxed A-arms that he feels will make the car more bulletproof in ugly terrain like Moab. Despite the added width, the travel remains the same. Rose admits that the ultra-wide track limits the car to open terrain and trails rated for Jeeps. But, the stable suspension platform is worth it to him. We had him fling the car into some sand turns. He tossed the car in wide open without ever lifting the inside wheels! That flat cornering was with 32-inch tires!

Instead of throwing money at the actual shocks, Rose fine-tuned the springs. The RZR XP1K uses two springs on each shock. He replaced the shorter springs with stock ones from a Polaris four-seater. The car doesn’t see much desert whoop-pounding, but we drove the car in whoops in the dunes and in a variety of slick-rock terrain. The car is impressively calm and stable at all times, and the suspension is very smooth.

The car normally runs Raceline wheels, but thanks to the nature of Kombustion’s business, the crew is often testing tires. We met up with Rose while the company was trying out Maxxis and CST tires. We asked him about the CST Lobo rock-crawling tires he was testing during our photos and test ride: “I’m not sure the boss is going to get those back. They are really grippy on rock!”

Rose has prettied the car up with a Turbo hood, a grill insert and bumpers. The car has lighted whips and Underglow lighting. He also has mirrors and an Assault steering wheel and shift knob.

As you might expect from a technician, the car gets a lot of sweat equity. Rose credits that maintenance for the reliability of the machine under extreme use. After every outing Rose pulls apart the clutches and cleans them. He checks the ball joints, wheel bearings, greases the axles and lubes the suspension. He even changes the oil every outing! He also installed a bed grill to reduce engine temps and make routine service easier. An R2C washable air filter also aids maintenance. The result is the stock belt is fine after 900 miles.

Being a working man, Rose didn’t throw money around indiscriminately. The seats and exhaust system are stock. He likes the quiet exhaust note of the stock exhaust, and the stock seats work fine, though he did install harnesses.

Climbing into the car is easy, and it does feel comfortable and secure with the tall doors. We thought we might feel like we were looking over the doors, but that wasn’t the case. We did appreciate the harness and the Assault wheel.

Driving the car is a blast. As a two-seater, it is nimble and easy to get around tight turns. The front end got light on some of the extreme climbs that Rose and Flanders attempted and actually climbed in the car. It was dead stable sideways. It crosses cambers like a spider with no drama at all. Any sort of rock climbing is easy. The XP’s high and low range is easily capable of handling the 32-inch tires. There is plenty of oomph available any time you hit the gas pedal. We learned a lot from this car. We are especially impressed with the level of prep between outings, but we have photo proof that the car is driven hard but still looks and feels new. On top of that, it has proven absolutely reliable. You can’t beat that combination. 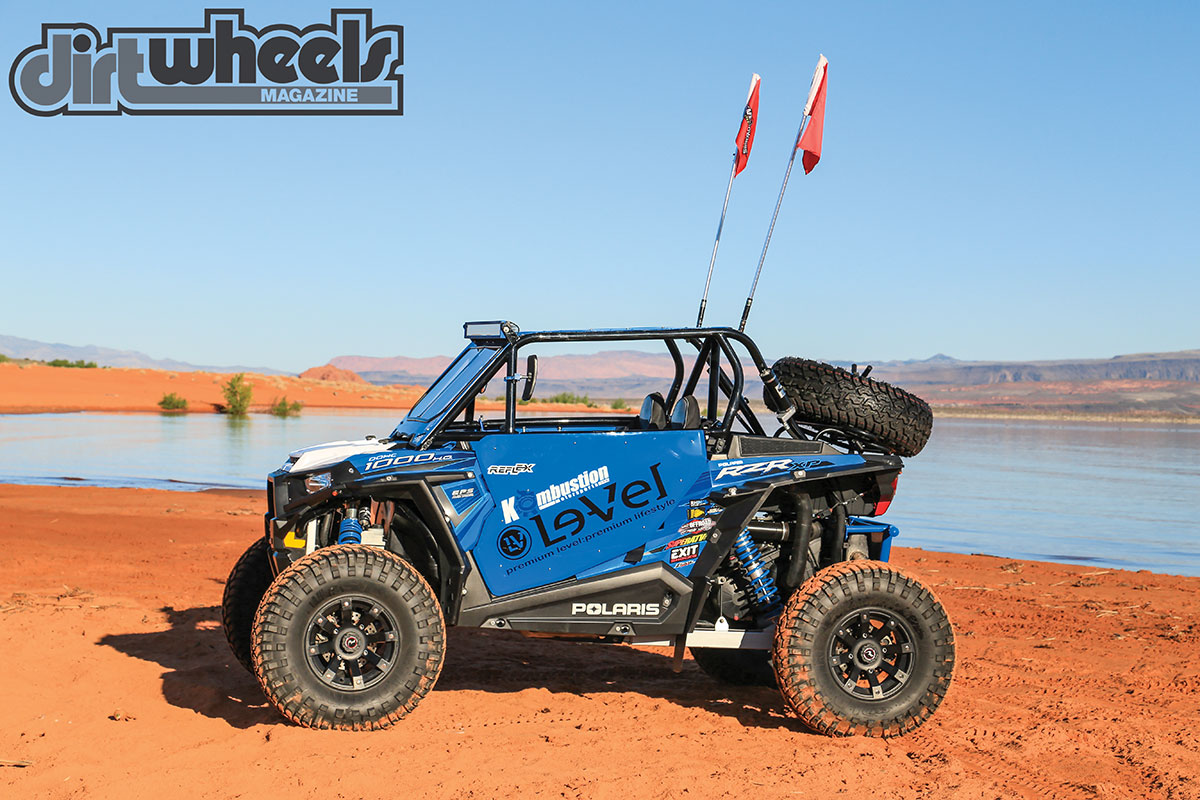