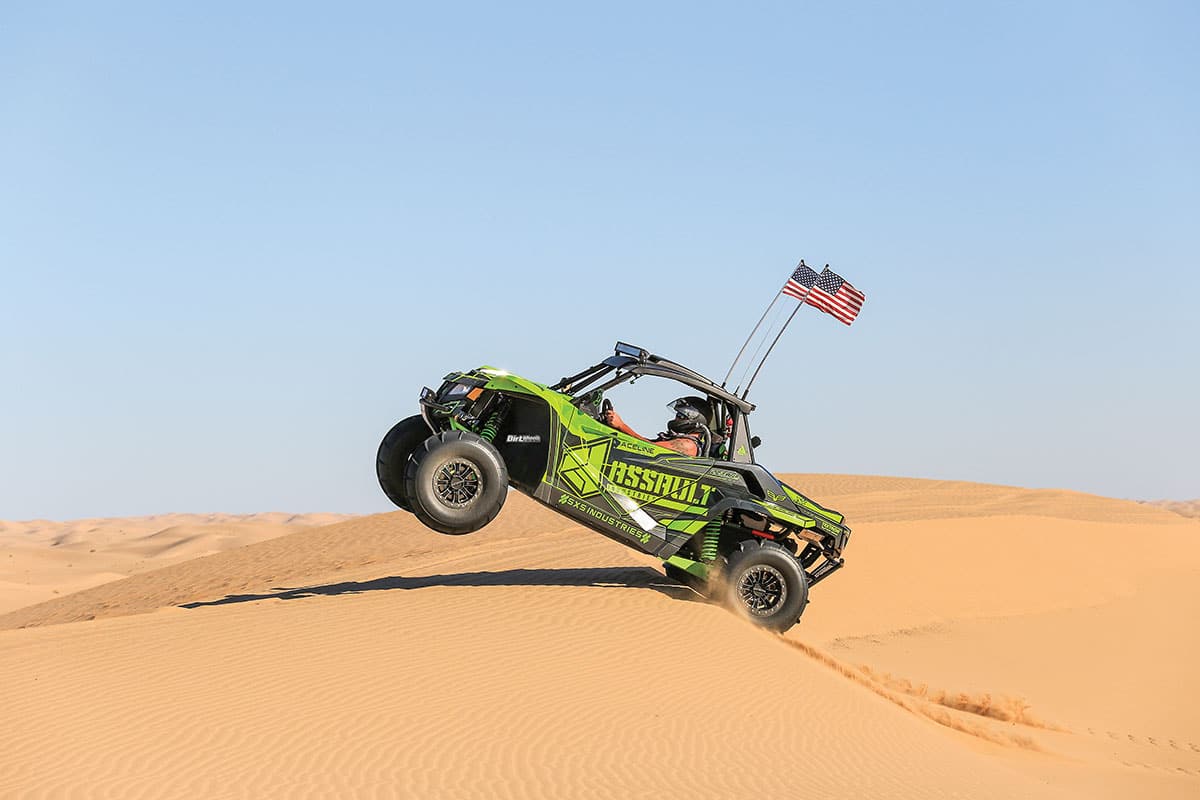 ASSAULT ARCTIC CAT SPEED WILDCAT XX.  Once Jason Craycraft saw information on the release of the Arctic Cat Wildcat XX, he was sure that he had found his UTV.

As the early-release machines reached dealers for sale, he snapped one up. In a show of patience that we can hardly comprehend, he waited four months to drive it! He intended to make sure that it was just like he wanted before taking it out for a maiden voyage. We have to tell you, we couldn’t do it.

WHERE NO MAN HAS GONE BEFORE

Before the car even rolled out of the dealer, it got new Simpson seats and harnesses for comfort and safety. Raceline Wheels and Yokohama tires were added as well. At this point, he hasn’t used the Yokohama tires much. No surprise, since part of his e-mail address is “glamisman.”

It was at that time that the projected trajectory slowed somewhat. Craycraft took the XX from the selling dealer to Brian Coats Motorsports to have the 77-inch Speed SxS long-travel kit installed. Coats was moving quickly on the build, but the XX and the kit were both new. As Speed SxS owner Robby Gordon was testing parts, new updated parts would arrive at Coat’s shop.

Speed designed the suspension to use the stock Fox shocks that come on the car, but they must be modified. Speed will do the work for around $1,000, but you can choose to buy the kit and do the work yourself for under $400.

Those widths might sound random, but the 77-inch kit Craycraft chose is the maximum width for Score International and Best in the Desert. Each kit includes axles, brake lines, Heim joints, rear trailing arms, front upper and lower control arms, and tie-rods. Expect those suspension parts to ship to you in raw, unfinished steel, so they will need a finish to protect the surface from rust.

While the car was at Coats, it also gained a Speed SxS roof with an air scoop. The scoop provides positive pressure inside the car to keep it from sucking dust in if you have a windshield. Coats built a custom front bumper while the car was at the shop.

After Coats had all the suspension bugs worked out, Craycraft picked the car up, but not to go for a ride.
Instead, he dropped the still-unused Wildcat at SxS Industries in Stanton, California, where the crew installed radio gear, GPS, and a helmet clean-air system from PCI Race Radios.

Finally, Assault Racing stepped up with all those great little products that make the difference between a complete build and one that feels unfinished. In addition to the wrap, the grill insert, shift knob, various Striker trim pieces, side and center mirrors, steering wheel PTT button mount, fire extinguisher, and mount, and green sticker mounting plate all came from Assault.

When the Wildcat is headed for Craycraft’s beloved dunes, those Raceline wheels get wrapped with Sand Sport SxS paddles from Fullerton Sand Sports.

After a long four months waiting for his Wildcat XX to be completed, it was finally up to Craycraft’s vision and ready to roll. After that first outing, this is what Craycraft had to say: “I finally got to drive it, and I couldn’t be happier!”

We met Craycraft and his group of fellow Wildcat XX owners at Glamis. The Wildcat XX is built tough with robust suspension, and that makes it a bit heavy in the class for a naturally aspirated machine, and with this one being fully outfitted, it is even a bit heavier.

But Wildcat XX lovers buy them for the suspension and handling. For those fans, handling and suspension are more important than outright power, even in the sand dunes.

That isn’t to say that the Wildcat is a slug. It is plenty fast enough for fun in the desert and dunes. Any Wildcat XX is clutched to keep the engine a little higher in the rpm range at all times than a Polaris XP 1000, but that isn’t annoying at all.

With the XDR exhaust, it is noticeable. The engine is plenty responsive and accelerates and pulls well. When we tested a stocker in the desert it topped out at an indicated 75 mph, but with the paddle tires in the dunes, we never found a place to get it over 60 mph.

We have seen plenty of Wildcat XX machines equipped with the Speed SxS wide, long-travel suspension kits on them, but this is the first chance we have had to drive one. This is a seriously awesome suspension. Even with revalved stock Fox shocks, the ride and control are amazing. The high-end suspension setup from Speed SxS utilizes King shocks. It is hard to imagine it could be better.

With the wide stance, the car feels super secure, yet is quick to react. Unlike some long-travel kits, the Speed kit didn’t feel like it took a football field to make a U-turn. Craycraft hit some jumps and awkward razor-edged transitions that would have upset a lesser machine, but this XX didn’t even wiggle funny.

We blasted through areas of irregular chop, and the car feels like it is floating on air it is so smooth. We had our Polaris RZR S 4 with us, and it has incredible computerized Fox bypass suspension, but it had nothing on the XX with far more basic shocks.

All of the other products that Jason Craycraft selected work together to make for a great-looking machine that has all the conveniences that you could want or expect from a UTV. He and his wife breathe clean air, can talk to each other and to others in the group, and the Simpson seats hold them in luxury and comfort. We just wish we could have experienced this machine in the desert where the suspension could have been pushed a little harder.

We would like to see a turbo on this machine, and Craycraft seems to be leaning that way as well. He has built a fine package that looks and rides great. It keeps the passengers in comfort and in touch. It has just what it needs and little that it doesn’t. This machine, or one like it, would be very welcome in our garage.