Evo Powersports is known for ramping the power up on turbocharged UTVs. With Evo products, you can make some massive gains. In fact, we have driven the company’s 400-horsepower Can-Am Maverick X3. But this Textron (now Arctic Cat again in 2019) Wildcat XX is an entirely different breed of ’Cat. Evo went into this project gambling that they will have a head start when and if the Wildcat XX comes in a turbocharged version. They readily admitted that the R&D time probably won’t be recouped if Arctic Cat sticks with the normally aspirated version only.

Evo was able to just plug into the ECU to handle an amazing amount of programming. Obviously, it is overkill for the stock machine, but the speed limit is raised to 120 miles per hour. Of course, you should worry if you hit 120, because you have likely flown off a cliff. At the opposite end of the spectrum, Evo enabled left-foot braking. Using the brake and the throttle at the same time with the stock programming can put the car into limp mode. It is also programmed to start in gear without holding the brake for race starts—handy since the ECU mods are for race use only. Adjusting when the cooling fan kicks on is another positive change. It is programmed to come on earlier for a cooler-running engine.

You can have the ECU alone programmed for $499. If you choose that option, a more aggressive throttle pedal map is programmed in. For an additional $299 you can send EVP the entire gauge cluster along with the ECU. If you choose that option, the dash will display the EVP logo every time the engine starts, but more importantly you will have a choice of three throttle pedal maps for different riding conditions.
Map one is very aggressive for, as an example, drag racing. Map 2 is more linear for driving the dunes or general trail riding. Map three boosts the fine control for technical driving and rock crawling.

Oddly enough, considering the new 120-mph speed limit, with the gauge package you can set a PIN-protected vehicle speed limiter via the dash. Younger or less experienced drivers can be restricted to slower speeds! In answer to complaints about how bright the standard gauges are during night rides, the dash programming allows dimming the dash cluster with a new menu in the instrument cluster.

Not all of the performance is from moving ones and zeros in the ECU. Added performance comes from an EVP Magnum-tuned stainless steel header mated to a stainless Magnum slip-on muffler. The header is compatible with a stock muffler, and the EVP muffler is a slip-on with the stock header, but the best power numbers are available with the ECU tune, the header and the muffler. You can buy just the muffler or buy a package that includes an EVP custom rear valance. There are a choice of colors for the logo in the rear valance.

Combining the modifications allows you an additional 150–200 rpm and at least 15 horsepower. While that may sound like a hop compared to the leaps Evo finds in turbocharged UTVs, on a normally aspirated machine, it makes a big difference. EVP also installs its own clutch kit to mate the power to the transmission. Even in the sand dunes, this performance boost is significant.

By starting with a Wildcat XX platform, there was no pressing need to replace the cage, it already had doors and a roof and the suspension is great as well. For safety the EVP crew added lighted Buggy Whips whips with flags. The final change was an amazing brushed metallic full wrap that is, naturally, covered with plenty of EVP signage without looking tacky or cluttered.

Since Evo was starting and ending with a naturally aspirated car, it made perfect sense to keep the car light. There isn’t any extra weight added that didn’t need to be added. And likewise, nothing was replaced that didn’t need to be. It has the stock KMC cast-aluminum wheels and CST Behemoth tires. Both times we drove the Evo XX it was in the sand dunes. First at Idaho Dunes and again at Glamis. Paddle tires might have helped, but the car felt very responsive and fun with ample power to get up big dunes.

We didn’t bother to play with the throttle settings. The normal one was fine for us, and we certainly didn’t want to give ourselves a speed limit. We were actually pleased the Evo guys didn’t see any reason to force a speed limit on us. In the dunes the XX handles and works fine, but it isn’t as impressive as the car is in the rough desert. Still, the car handles fine and the suspension does soak up large bumps.

As much as we like the CST Behemoth tires for the desert, they aren’t the best for dunes. Tires with cross-wise tread blocks like the Maxxis Bighorn work better in the sand. Having snappy power and a more responsive engine makes the XX much more fun to drive. It builds rpm quickly and accelerates quicker and pulls stronger than stock. The power and response difference is instantly noticeable and satisfying. The car is definitely a little louder than a stock machine. The XX does still run fine on premium pump gasoline.

We are confident that the XX platform has plenty of handling and suspension to deal with the power of a turbocharged engine. It is a given that this small but satisfying bump in performance only helps the car and has no negative aspects. There is no cost involved making the car ready for the power. Evo’s Wildcat XX has the power to make you smile full-time. 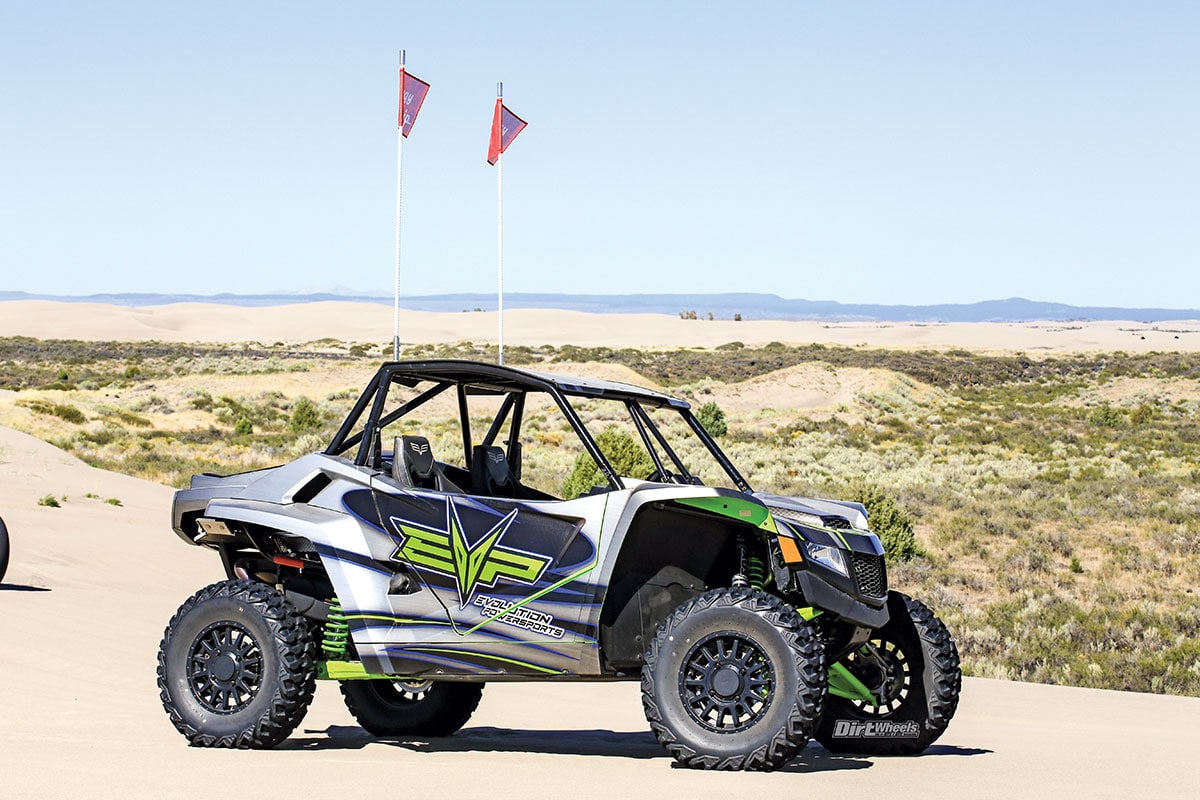