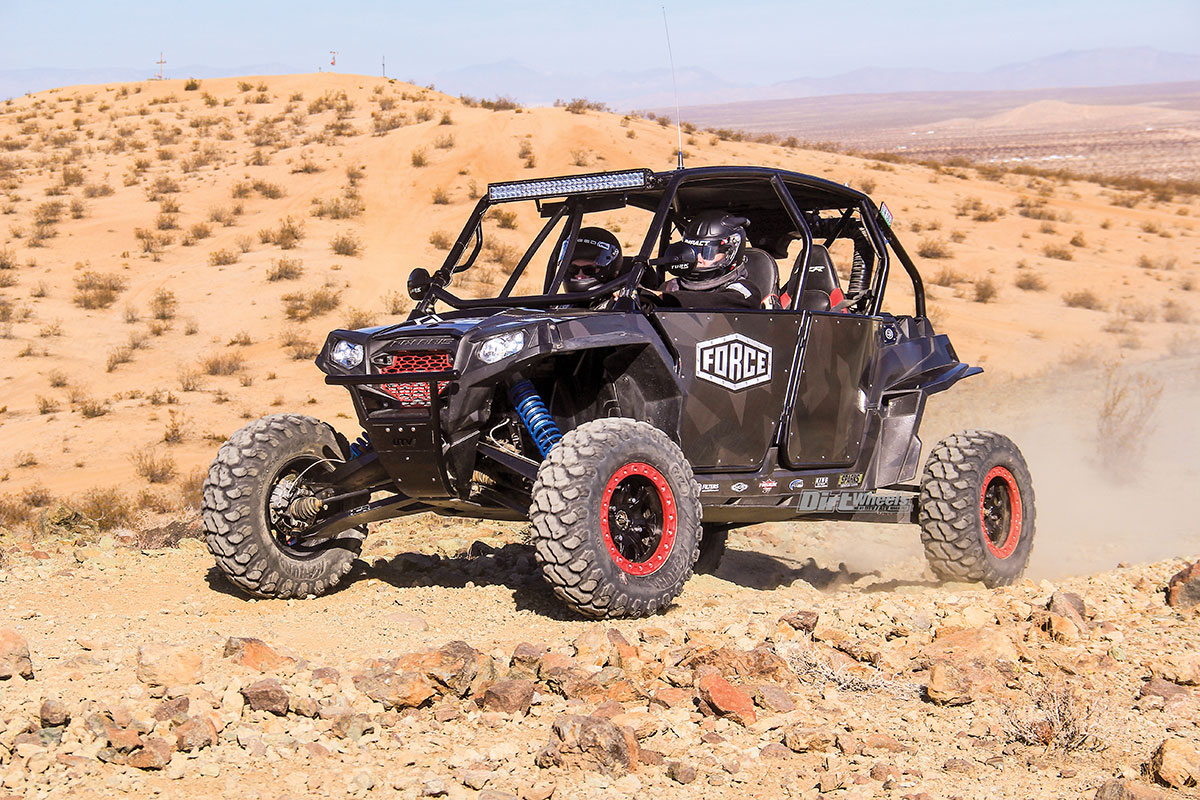 Beverly Hills is a place where beauty is manufactured and the elderly get a new lease on life—well, in the looks department at least! Force Off-Road is a company that is veteran-run, and they outfit UTVs and other off-road toys with aftermarket upgrades. This means that they also get to give elderly UTVs new parts that help them keep living in their golden years. Scott Scurlock is a part of the Force team, and he purchased a tired Polaris RZR XP 4 900 from one of the Force owners with the hopes of improving upon its previous existence.

This XP 4 900 had a few modifications when Scott purchased it. There was an aftermarket roll cage that has front intrusion bars and a roof installed. Doors, a light bar, bumper, and front seats were also included on the old build. In order to change up the color scheme from white and red to black, Force needed to take off the cage, doors, and a few other parts. Next, Force put the RZR on jack stands and began removing the old wheels, front and rear suspension, old exhaust, and more. Upon removing parts, they spent a lot of time inspecting the wear and tear on the machine. Fortunately, the RZR was well-maintained and taken care of. The goal for this rig was to have it perform better out in the wide-open desert with a smoother ride.

Once the cage, doors, and new UTV Inc. Shorty race-style front bumper were sent to Powder Coat Industries for the black treatment, work on the interior began. Force installed a Rugged Radios RRP660 Plus intercom with a 60-watt radio in the dash of the RZR. This system allows Scott to communicate with his wife Jennifer and other vehicles in his group. Force mounted Rugged’s M2 helmet pumper system with a speed controller and MACX hoses to push filtered air to the occupant’s helmet. They had to cut into the dash to install a new switch plate for the updated accessories.

When all the pieces returned with a powder-coated black finish from PCI, they were bolted back onto the machine. A new rear light bar from RearLightBar.com was mounted to the cage, along with a set of quick-disconnect lighted 5150 whips. New switches were installed into the switch plate to control these items, along with the reinstalled front 38-inch Rigid Industries LED light bar. The last roll cage part installed was the S&B Particle Separator that feeds mainly fresh air to the intake filter.

The separator sucks in dirt and air, spins the dirt out and pushes the clean air through. It is a proven system in the off-road racing scene that allows you to change your air filter far less, which means more consistent horsepower numbers. The PRP seats were reused with a set of four-point Pro Armor harnesses. A new suede Tomahawk steering wheel with an adapter was mounted up next from Assault Industries. A ZBroz passenger grab handle and Tusk mirrors found their way on the RZR. A set of Dragonfire door bags rounded out the interior upgrades.

There is no doubt that Polaris’ RZR XP 4 900 isn’t the most powerful machine around. The difference between it and a newer 1000 is pretty drastic. However, the 900 isn’t a slouch by any means. Scott wanted Force to help him dial in the clutching and exhaust since the renewed RZR would have more weight. They decided that Sparks Racing was the place to start. A Gen-6 X2 full exhaust system was installed. In order to pick up the ponies, the air filter was changed to a Sparks, and the clutching was then massaged with a Sparks setup. And last, they gained a Dynojet tuner and tune from Aftermarket Assassins to turn up the fuel output that allows the higher-flowing exhaust and intake to perform properly.

The crowning enhancement on this Force build is, without a doubt, the suspension package. Scott decided on an HCR racing kit that included an impressive set of adjustable remote reservoir King shocks. The HCR kit included wider long-travel A-arms and trailing arms with new radius rods and tie-rod extensions. Before the kit was installed, Force welded up a frame gusset kit.

The new arms are much stronger and heavier than the stock setup.  HCR’s suspension kit is very straightforward to mount up without any major modifications needed, but the gusseting is a great idea. Force gained a full set of rear axles that included new CVs for the rear, but the front axles required the stock CVs to be rebuilt and longer shafts installed. All four King shocks have remote reservoirs, so the front resis needed a home. The rears were easy to install. After the whole suspension kit was mounted up and the brakes and related parts were installed, a set of GMZ 15-inch Gunslinger beadlock wheels with 30-inch GMZ Kahuna tires wrapped around them were bolted onto the RZR.

Our test of Scott’s Force Off-Road-built RZR XP 4 900 was in the Mojave Desert of Southern California at a spot called California City. Cal City was supposed to be a very large development, but that never came to fruition. Instead, graded dirt roads were made in the open desert, but housing was never built in the riding area. This left the desert open to campers that enjoy the wide-open terrain where they can stretch their legs on their fast off-road toys. Scott and Force had an impressive campsite of nice motor homes and radically modified RZRs that were covered in dust from off-road fun.

Stepping into the RZR 900 felt like a blast from a past that was actually not that long ago. Since we drive brand-new rigs often, this machine felt a little dated, but it didn’t handle like it. The power output of the engine and clutching improvements gave the machine enough gusto. In comparison to the new sport UTVs, this RZR doesn’t blast out of turns, but in all reality, it is still sprightly and fun to drive.

When the going would normally get rough in a stock 900, it was smooth sailing for Scott’s rig. The wider HCR Racing suspension kit provided a lot more stability over stock and gave the RZR more travel as well. The King shocks soaked up big hits, scoffed at deep whoops and smoothed out choppy terrain. The GMZ wheels and tires did make the steering feel a little heavy. A stock 900 came with 27-inch-tall tires, where as the Kahunas are 2 inches taller. They provide more ground clearance and rolled over obstacles easier, but that drastic tire/wheel size difference will slow a machine down a bit. The tires were nice and tractable on the hardpack, and they even floated through sand well.

Force Off-Road did a great job on this build. They installed parts that enhanced the fun factor and made the machine smoother and safer. It is hard to swallow the price tags of some of these parts when you consider that you are mounting them up on an older machine that would need drastic engine changes to get comparable torque and horsepower numbers with new sport UTVs.

However, if your wallet says you can spend a certain amount, the option of an older machine outfitted with a bunch of nice parts or a stock newer machine for the same price is a tough one! On the other hand, Scott was new to UTVs, and now he has a great understanding of every mechanical aspect of his machine. It handles great, has suspension that doesn’t beat the passengers up and has enough power for him to build confidence driving his new machine.