You never know what will set a person on a path to success. The trip to this scratch-built, 450-horsepower not-a-Polaris began many years ago when Chris Leaming’s father Rob gave him a new Yamaha Tri-Zinger 50cc three-wheeler for the SoCal deserts. The little Yamaha ignited a lifelong spark of off-road passion. The father-son duo are now partners in Gilbert, Arizona-based XTC Power Products. They moved there to grow the company that specializes in UTV electronic parts, such as street-legal turn-signal kits and switch and wiring solutions.

With the launch of their new product line, Rob and Chris wanted to build a car that stood out from the rest and showcase their line of Plug & Play wiring.

You may remember the Dirt Wheels story on XTC’s impressive Best in the Desert series race machine. As impressive as that race RZR was, it was built to a set of fairly rigid race rules. This beauty actually predates the racer, and unlike the race car, this monster set out to break all the rules.

With just over two months until XTC’s first appearance at the Sand Sports Super Show in Costa Mesa, California, Rob and Chris reached out to Doug Tyler of TMW Off-Road. They wanted to see if he and his crew were up to the task getting a Subaru engine fitted into a Polaris RZR four-seat chassis in less than two months.

Doug responded with, “We would love too!” The XTC crew were quick to phone the Polaris dealer in Glendale, Arizona, to order all the factory parts needed for the build. They didn’t start with a complete car, but ordered everything from the RZR XP 1000 4 chassis—plastics, brackets, fasteners, fuel tank and so on—directly from their awesome parts department. Once the parts started showing up, the chassis was off to TMW where the crew worked countless hours to make the short deadline a reality.

If you want to see Superman, watch phone booths, but to see the hidden superhero in this car, look under the rear part of the body. You won’t find anything from Polaris, no CVT, but you will find double the usual number of cylinders.

A Mendeola race transaxle and a 500-plus-horsepower turbocharged Subaru engine fill the engine bay. The combination looks like it belongs there. It is only hooked to the rear wheels. Weight distribution must differ wildly from a RZR with the heavy engine, transaxle and the radiator in the rear and no diff, axles or driveshaft in the front.

After TMW worked their fabrication magic, the crew at XTC picked up the chassis and aluminum tin work and ran straight to powder coat. After the chassis and suspension were coated in a bright Loli-Pop Red Candy powder, the guys in the shop at XTC had just two weeks to build a running car.

With XTC specializing in Plug & Play wiring harnesses, they grabbed off-the-shelf products to make easy work of wiring the car in short time. The switches power up the engine management, fire the starter, ignite the lights and light bar, and take juice to the Rugged Radios car-to-car and in-car intercom, Rockford Fosgate tunes and a Lowrance GPS screen.

After the chassis was wired, the crew spent late nights and weekends getting all the other components fitted and installed. Despite the rush schedule, there were no shortcuts. They plumbed the car in all-stainless steel hard lines and braided hoses with billet fittings.

They wanted a masterpiece that any off-road or auto enthusiast would appreciate. “HellRazr” has been shown at Camp RZR, the Dub Show, Hot Import Nights and UTV Invasion, and it won Best of Show at all of them. But don’t let the show-car awards fool you, because Rob and Chris have taken their turns over the past two years shredding the sand and airing out the car in Glamis, California, on a regular basis.

After two years the front fascia of the 2018 RZR Turbo S ignited Chris’ imagination, and he threw himself into refreshing the look. Experts claimed there was no way to mate the all-new S front end with the older front quarters. Challenge accepted; Chris aimed to have his S four-seater finished before Polaris released one, and he made it!

The process required Chris eyeballing the parts and using a Sawzall freehand to mate the parts. We had seen the car around but were reacquainted with it when it won the Pro Builders’ class in the Show and Shine contest at the UTV Invasion. That was the attaboy that made all the work worth it.

The custom suspension arms widened the stance and added travel. At the rear, the car runs two Shock Therapy-dialed shocks to a side, but only one of the shocks runs a spring. The front suspension is conventional but beefed up for the power and weight of this car. Also, the crazy-long shocks are mounted to the lower A-arms rather than the upper arms like a stock RZR. So far, the suspension and chassis have been holding up to the power well.

It is a little odd to look into a RZR and see a clutch pedal. The Mendeola racing transaxle is a stick shift with a manual clutch. A transmission this tough is required with an engine as powerful as the turbocharged Subaru. It has massive power on tap, and Chris is not afraid to slip the leash on the ponies. The car runs massive Sand Tires Unlimited 33-inch paddles on delicious custom 17-inch-wide Fuel rims that would cripple a stock RZR. This car spins them easily. The front tires are CST.

The majority of the interior electric components are mounted in a full-carbon fiber dash. Autometer gauges monitor the mechanicals, and the gauge faces are carbon fiber so they look amazing in the sleek dash. The remainder of the interior is dialed in with four matching Triple X suede seats and Crow seat belts. 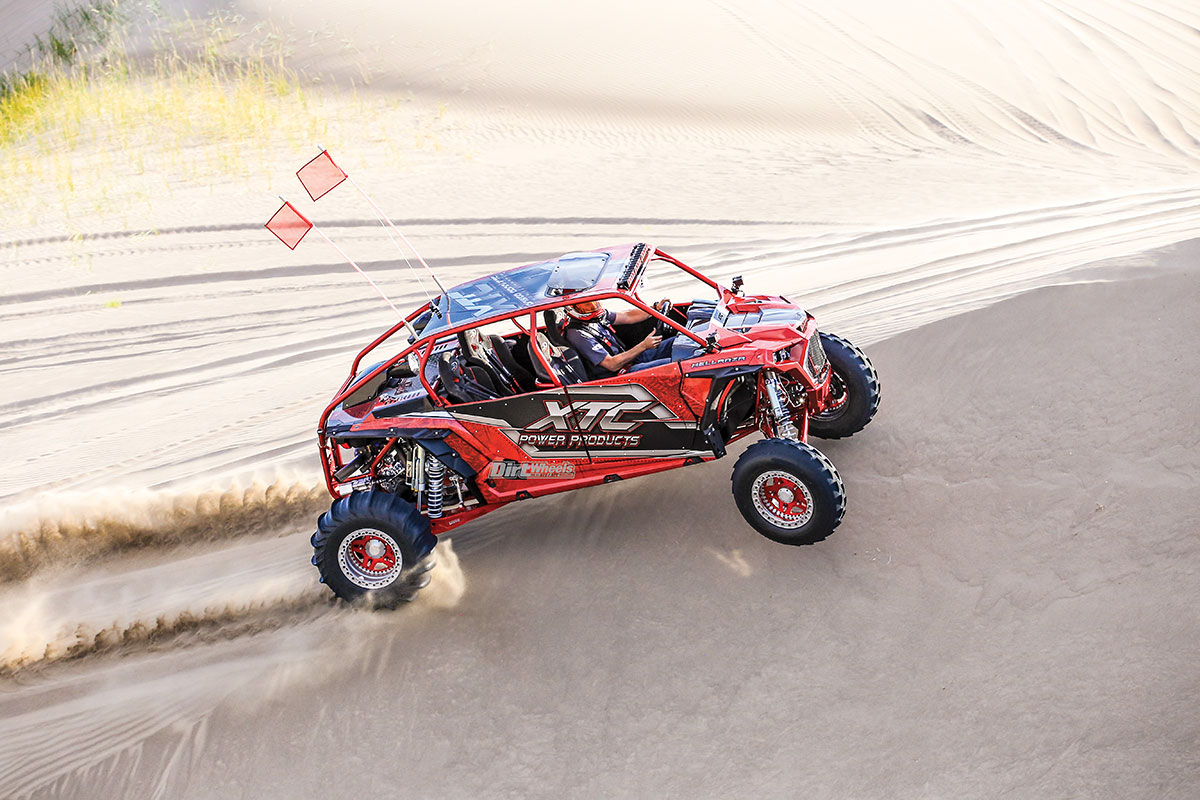 We didn’t actually drive this car, but spent half a day in the front and rear seats. The suspension makes the car tall, so getting into the back seat is a stretch, but the suede seats are comfortable. Once the car is rolling, the engine noise drops behind and the sound system dominates the cab.

Suspension action is a little stiff in the slow chop, but gets smoother as the car gets faster. In third gear and above the car literally feels like it is flying.

It floats across the dunes. It is capable of 106 mph on sand! Chris is ready and able to play in the largest dunes to be found. It was important to Chris that his rolling calling card look like a RZR, but it doesn’t have that much in common with a stocker. The performance is staggering, and like all machinery at this level, things break occasionally, but this car is impressive. For a car named “HellRazr,” we thought it was a pretty heavenly ride. 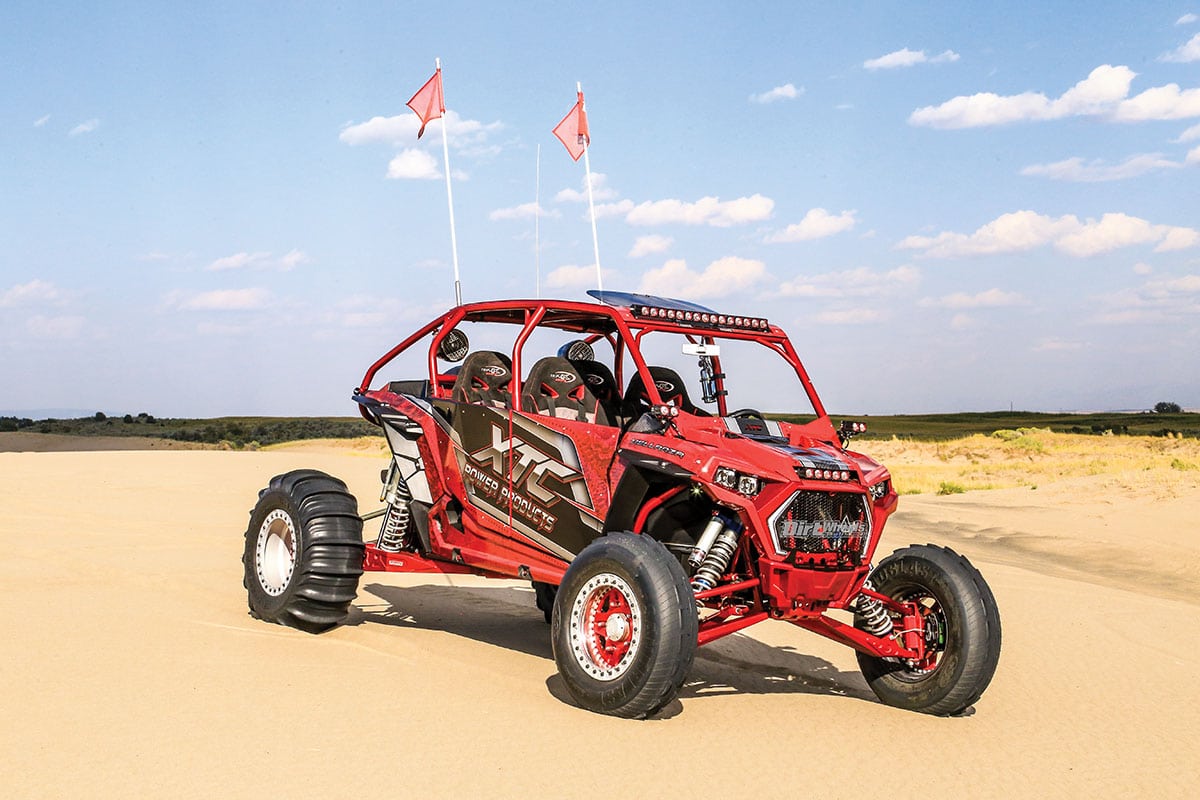 V3.0 closed-deck block with forged internals. Air is being fed by a T4/T5 Turbo