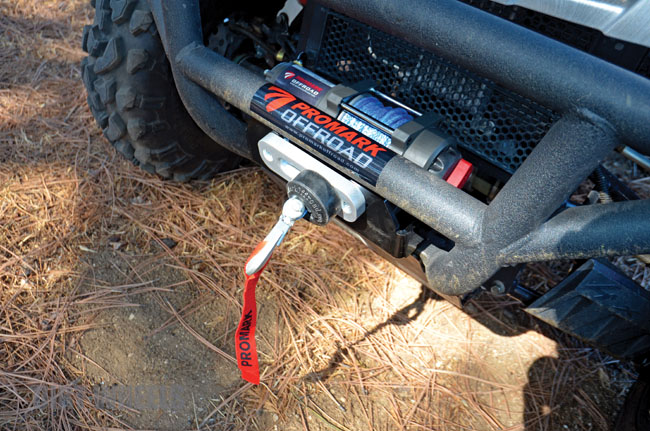 ATVs and winches go hand in hand much like passenger cars and cup holders. If you like to explore the unpaved world, chances are you could get in a jam that any winch would help get you out of. Chances are even greater that having a winch on your quad can rescue someone else. According to our surveys, a winch is the number one accessory installed on a utility ATV. Even off the trail, winches can come in handy with all kinds of chores. One of the latest winches to hit the market, fortunately, is one of the most affordable too. The product is called the ProMark Offroad XTR3000. We chose to test the unit on a Yamaha Rhino we have in our stable.

As with most machines, most winch installs require the use, purchase and mounting of a winch plate. One of the most popular winch mounts known is the heavy-duty product from Fuse Powersports. Fuse is also a retailer for ProMark winches, and they sell the XTR3000 for only $224.99. For the Rhino, the winch mount will cost another $74.95. Fuse has other winches that sell for as low as $170—that’s the 2000-pound model with steel cables. 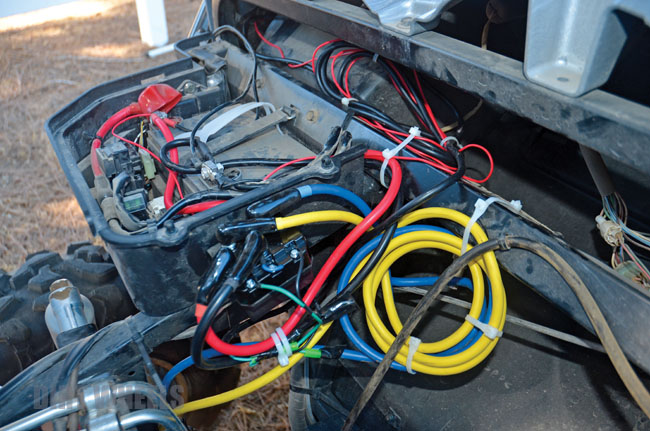 Installation of the mount went smoothly. Fuse supplies four high-grade bolts with locking nuts and washers. On the Rhino, the mounting plate fits right behind the lower part of the front bumper and bolts to a super-strong part of the lower frame. It took another four bolts to attach the ProMark winch to the mounting plate, then two more bolts affix the aluminum winch fairlead to the front. Although the winch cable is easy to access on the front of the Rhino, it is pretty well protected behind the stock bumper.

The meat of the XTR3000 is a waterproof, sealed motor with all metal gears that winds a spool with 45 feet of winch rope. This model has ProMark’s blue synthetic rope and a 1-inch, clasp-locking, galvanized metal hook. Another cool feature of this winch is that it has a rubber bumper at the end of the rope to prevent you from winding the rope in too far, and it reduces rattling.
To provide power to the winch system, ProMark uses all color-coded wires and terminal ends, making the rest of the install just as painless. The winch gets wired to the machine’s battery after going through a relay/terminal block. A good spot we found to mount the terminal block is to the outside of the Rhino’s plastic battery box. 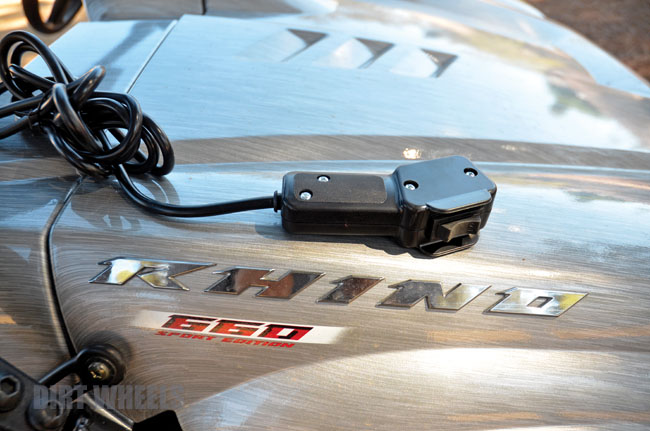 To operate this winch, you can do it with a small toggle switch or with a wired remote switch, which we mounted in the glovebox. This ProMark winch has a quick-release feature that unlocks the spool so you can unravel the winch cable quickly to get it to your connection anchor. This also saves battery power and overall winch life.

For us, the winch has performed flawlessly. It’s easy to use when we need it and is completely tucked away when we don’t. For example, we pulled the Rhino forward 20 feet without the engine running, and the process took only one minute. We have also used it to pull the Rhino into the back of a pickup on several occasions. And, we used it to pull an old Yamaha 4×4 with a locked-up engine onto our flatbed trailer. In fact, we wish we had this winch mounted to the front of the trailer for future rescue missions. We will install one soon.

ProMark winches are available in 2000–4000-pound strengths, and Fuse has mounting plates for virtually every ATV or UTV on the market. With prices ranging from $270 up to $280, it’s a small investment that can save your day or possibly help out a total stranger, which is priceless. Contact Fuse Powersports at (763) 689-4800. Or, view their complete product line at www.fuse-powersports.com.