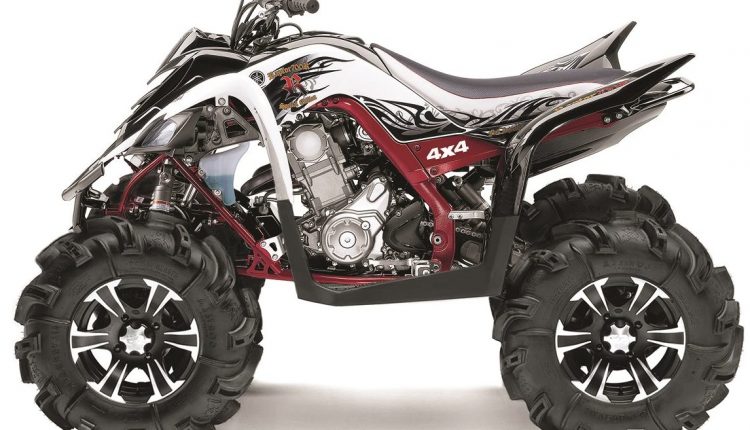 — Would you like to see this quad at your local Yamaha dealer? —

15 years ago was an epic boom period in ATV history. 2003 was when the rise of high-performance four stroke quads began. One after another, the manufacturers were releasing their incredible 450s that were so much better than the sport quads we rode before. They were fast, handled well and had great suspension. ATV riders felt fortunate that these kind of quads were finally available and eagerly grabbed them off dealer showroom floors. The quads were engineered to take full-throttle abuse all day long, which meant you could easily hang on to your 450 for several years or longer before thinking of replacing it with another one.

Life was grand for ATV manufacturers and their performance quads— until around 2007, when the economy started to tank. In the new penny pinching environment, sport and performance quad sales began to slow down. However, 4×4 quad sales didn’t suffer as much, so this became the new focus for quad manufacturers. New and improved 4x4s continued to be offered, as well as additional UTVs for that new potential of sales revenue.

So, this has left the manufacturers wondering what can be done to boost the interest and sales of sport quads again. Can they be tweaked in a way to spark attention from the larger 4×4 buying market? Can-Am certainly was thinking about that when they introduced their sporty 4×4 line known as Renegades. Polaris had a Scrambler model that was getting stale, but recently answered Can Am’s challenge by raising the bar with their all-new Scrambler 850. Who’s next to make a push into the sport 4×4 market?

Yamaha’s response is that they’ve been involved in sport 4x4s all along. In fact, they can actually claim to have invented this category nearly 20 years ago with their Wolverine 350. It evolved to a 450 in 2006, but still, in the horsepower department, it doesn’t make you think about high performance the way the other machines do. It’s time for Yamaha to bump that up a notch, or perhaps a whole bunch of notches—something that would cause hardcore performance riders to really take notice. The Raptor 700 is the king of sport quads, so what better than to make a 4×4 version of that?

BUILDING A BIG-BORE SPORT 4X4
The inside information we have through various sources does indicate that Yamaha already has several big-bore sport 4×4 proto types in the works. Whether they’re calling it a Raptor 4×4, or something new is not known, but it doesn’t really matter at this point. For now, we’re going to refer to it as a Raptor 4×4 and speculate on what mechanical features it’s likely to have. It shouldn’t be tough to run a driveshaft forward from the Raptor’s engine since it’s very similar to the Grizzly’s engine. The question is if it will retain the chain drive to the rear or have a shaft system there as well. That could be based on whether the Raptor 4×4 keeps the swing arm and straight-axle design, or switches to independent suspension in the rear like the Grizzly. From a sport-riding point of view, straight axles provide flatter cornering, but limit ground clearance for ruts and mud. The word is, Yamaha has prototypes of both styles being tested, so it’s not a given on which one they’ll go with.

FLOAT LIKE A BUTTERFLY
If Yamaha does go with independent rear suspension on their Raptor 4×4, it’s possible they may also have a sway bar that’s easily adjustable to be stiffer when needed. For 30 years, race car drivers have been able to do this from the cockpit. There’s a cable going to a flat, flexible sway bar link that you can rotate with clicks to the wider, less-flexible side. This would certainly be something new that other sport 4x4s have never offered before. Highly adjustable suspension is another improvement that Yamaha could bring to the sport 4×4 world. We would expect the Raptor 4×4 to have remote reservoir shocks with both compression and rebound damping adjustability that offer 10 inches of travel, front and rear. The biggest question about the Raptor 4×4 is regarding the type of transmission it’ll have. Will it be an automatic CVT style, or have a manual six-speed gearbox? Again, Yamaha is testing both styles to see which works better in 4×4 situations. Inside sources lead us to believe that the manual-shift version uses a clutch similar to the one on Honda’s 250X, which is both automatic and manual. This would eliminate the possibility of stalling the engine during slow rock-crawling situations.

RUGGEDLY HANDSOME
In the styling department, Yamaha’s sport 4×4 will have plastic bodywork shaped more like the Raptor instead of the Grizzly. In fact, it could be a selling point for it to look just like the current Raptors. Things will be different in the foot peg area, though. Full-length floorboards with extra splash protection should be standard. The wheels will be cast aluminum instead of spun aluminum, which will add to the weight, along with the heavier 4×4 tires. It’s not easy to make a lightweight big-bore 4×4, with drive shafts going front and rear, two sets of axles and eight CV joints. In Yamaha’s case, though, we expect them to be successful at keeping the Raptor 700 4×4’s weight to a minimum. It could come in at 200 pounds under the weight of the Scrambler 850. This would help make up the difference between the power of a 700 single versus that of 850 and 1000 twins. The nimbleness of its smaller dimensions and good suspension should make the Raptor 700 4×4 an awesome machine for cross-country competitions on sloppy trails. We can’t wait to actually take one out for a test ride.