It was a good thing we had reservations. Especially when we saw how many people had arrived before us. Having traveled from our home in Washington state to Winchester, Oregon, and its scenic Umpqua Lighthouse State Park, the last thing we wanted to do was look for a campground with a vacancy. This resort-like community is located on the Southern Oregon coast. My wife Laura and I were there to check out the pristine dunes and great riding available at one of America’s best beach dune riding areas and attend the  Oregon Sand Fest 2000.

The annual Sand Fest is a dune extravaganza that consists of a series of off-road competitions and rides through the scenic dunes located on the Pacific Northwest coastline. We were surprised to see how many people were camping in dispersed sand camping. It looked to us like four small towns that grew up on the sand. There were people driving every type of contraption imaginable. If it had a motor and wheels, you could find one. There were go-peds, motorcycles, three-wheelers, four-wheelers, Odysseys, buggies, Jeeps, rails, trucks, trailers, and motor homes all out on the sand. The dunes were buzzing like a swarm of bees. 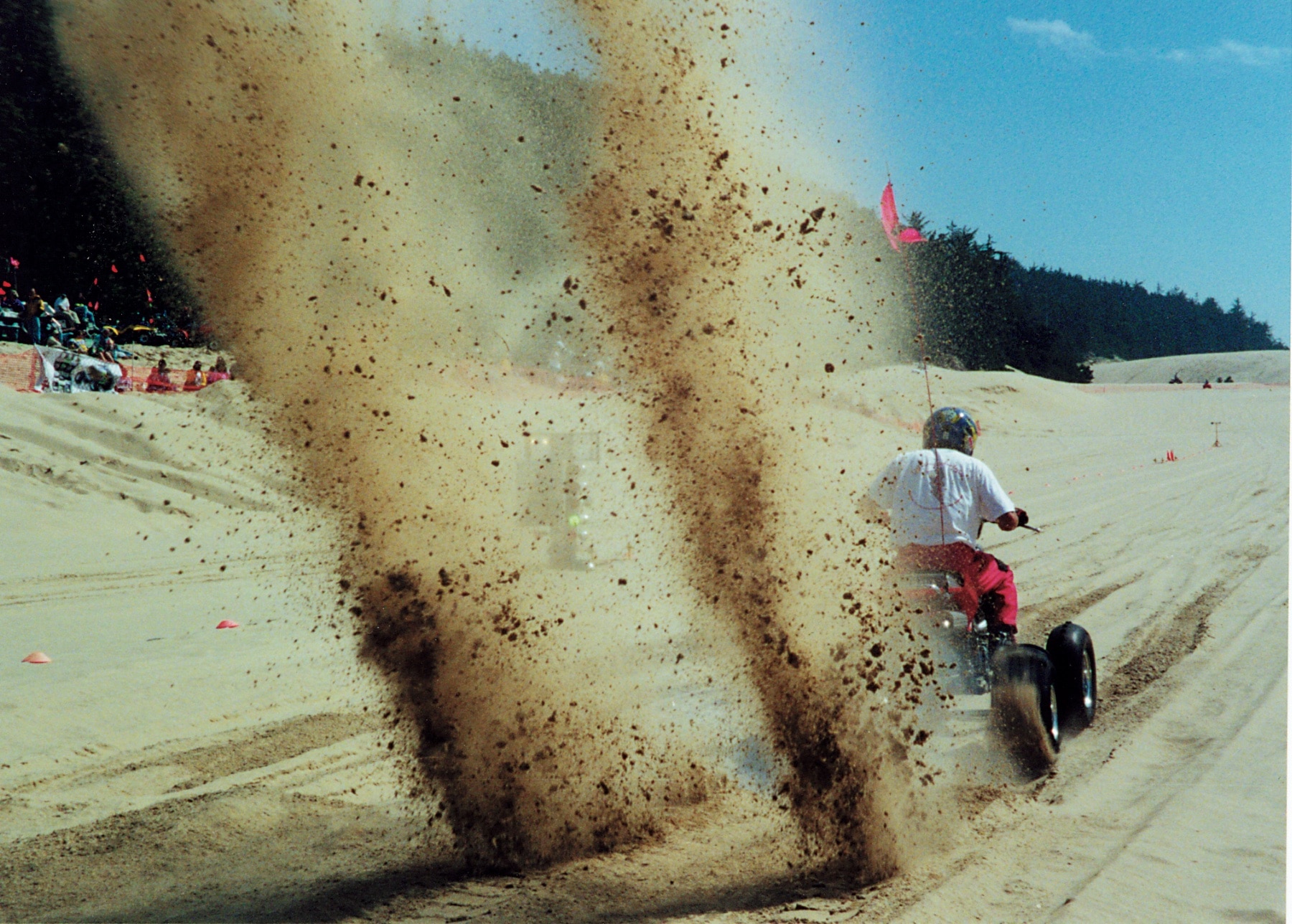 These dunes are the tallest coastal dunes in the country, reaching several hundred feet high. They are also steep, and the most scenic. There are views of the Pacific Ocean, freshwater lakes, mountain forests, fertile wetlands, wildlife, and plenty of open sand. Umpqua Lighthouse is a historic landmark. It stands 67 feet above the dunes and has nearly 1000 glass prisms that were hand-cut in Paris in 1890. At the entrance to the Umpqua River, the lighthouse disperses 210,000 candlepower of red glowing light over the Pacific Ocean.

There were over 40 booths set up at Salmon Harbor peddling their wares. Local motorcycle dealerships represented all of the major ATV manufacturers. Polaris was the main sponsor. In addition to their booth at the fair, Polaris also set up a demo ride booth at the entrance to the dunes. You could try out any of their machines on a coned-off course. Many of the booths sold quad parts and accessories. There were also booths where you could pick up “Sand Fest 2000” T-shirts and other souvenirs.

We were happy to see the U.S. Forest Service booth with our friend, Off-Highway Vehicle Coordinator Sharon Stewart, manning it. She was keeping people informed on important issues at the Oregon Dunes National Recreation Area, like noise management. The maximum decibel limit for off-highway vehicles at the dunes is 93dB. Two other important informational booths we visited were the ATV Safety Institute and the National Off-Highway Vehicle Con­ser­­vation Council (NOHVCC). They gave me informative literature that I brought back to my local ATV club.

On Saturday night there was a street dance at the vendor’s fair with a live band, Frozen Rose. It was a little cool that night with a steady ocean breeze, so people kept warm by
dancing to rock and roll
music. During the inter­­mission, Extreme­Buggies.com put on an awesome digital slide show and video clips of the days’ activities. It was such a hit that they replayed the 25-minute presentation two more times during the music. People loved to see themselves and their rigs perform. Jim Suty at ExtremeBuggies.com told me that he updates his website weekly and is catering more and more to quads and families.

Pro Caliber Motorsports and Heavy Metal Polish sponsored the Show-N-Shine held Saturday morning at Discovery Point Campground, located prior to the entry of the dunes. There were some pretty fancy rigs on display there, but there were others that were just as impressive that didn’t enter because they were out on the drag strip.

• “Best of Show” was taken by Don Paulson of Portland, Oregon with a 93 Banshee. He had the motor built by Streamline Performance in Vancouver, Washington; Paint by AJC Custom Paint Werks in Gresham, Oregon, and aluminum work done in Fairview, Oregon by Midnight Motorsports.

• “Best Paint” was won by Krazy Dave Moore of MP Racing in Salem, Oregon with an alcohol-fueled 250X, 3-wheeler that he calls The Raptor. He has his own shop where he does engine, machining, fabrication, and painting on plastic. He can be found on the web at www.motomallusa.com or call (503) 361-7666.

• “Biggest and Baddest” machine was taken by Bill Stewart of Keizer, Oregon who races for Mac Racing. He owns Shorty’s Parts Warehouse in Keizer, where he tinkers with his alcohol-fueled 96 350 Banshee that he says is capable of doing 4.5 second times on the drag strip.

• There was a tie for Best Detail between Doug Miller and Scott Atherton of Direct Drive. Scott has a custom Banshee, but we couldn’t find Doug to check out his ride.

The main event at Sand Fest is drag racing. This year the American Sand Drag Association (ASDA) hosted it. Their crew, run by Les Gray is the best in the business. Testing and tune-ups for the drags were run on Friday. This was fun to watch as last-minute adjustments were made. There were some disappointing runs, but the fastest times were also turned in that day. A rail named Blown Income got people excited when his motor caught on fire, but it wasn’t serious. We found that name to be quite fitting.

The fastest speed I saw for a quad in the sand drags was Dennis Packards posting of 84.5 miles per hour. The fastest machine was a VW-powered dragster driven by Toby Krumvieda, from Puyallup, Washing­ton who covered the football field length of sand in about 3.35 seconds. That computes out to a smoking 120 mph.

Saturday’s competition lasted several hours, with Pro­fessional and Sports­men classes running in brackets. Bracket­ing is where competitors race against someone who is running the same time, so it tends to have some exciting close races. The sand was dry and loose on the 100-yard long track, but ASDAs Scott Mason told me that powdery sand doesn’t dramatically ef­fect the lighter machines or quads. I wondered how they were able to hold on to those crotch rockets blasting off at those speeds.

For quads, there were two pro classes and two sportsman classes with 73 competitors. There were also four classes for the kids. Those kids really enjoyed themselves. For some of them, this was their first time racing. The racers put a lot of work and dollars into their machines. Louie Swan built a 700cc, triple cylinder Banshee motor. I found two machines with GSXR-1100 motors on LT-500 frames. Another machine had a KZ-1000 power plant bored out to 1200cc that was turbo-charged and ran on Nitrous Oxide. The owner, Steve Miille, claims it has 340 horsepower with 22-pounds of turbo boost pressure. Although Jeff Lilly was running it in the drags, Steve says this is his dune bike.

The ASDA intends to return to Sand Fest. Scott tells me they plan on making the event bigger and better every year. He said they will definitely have a better track in 2001. In fact, the promoter wants the track completed this winter with the possibility of staging an event in the spring.

Roby Leach of the Albany, Oregon Motor Sports Park ran the Motocross race on Sunday. There were two motorcycle classes and six quad classes. About fifty quad riders, of both sexes, competed on the half-mile long course that wound its way through the sandy hills at the base of the dunes.

About 300 entries participated in this Saturday and Sunday event. Five stops along a counter-clockwise course insured that everyone visited the most scenic places on the dunes that are accessible by a machine of 200cc or larger. Stops offered inspiring views of a small waterfall, Clear Lake and the Pacific Ocean.

The Salem Sand Club ran the event and collected a treasure chest of very nice prizes to give away. Kris and David Hoover, who supervised this event, told me that the club is dedicated to teaching that it is possible to have power and conform to noise level restrictions at the Oregon Dunes National Recreation Area. David Rides a Yamaha Warrior with a CVR600 motor and two TT600 pipes. They wish to thank everyone that made this an enjoyable event.

Laura and I were able to take some time out from the organized events to ride the dunes and enjoy the trails. We found we had the trails mostly to ourselves because the majority of the riders were attacking the dunes on their souped-up machines. We had a wonderful time riding on our own.

When things were winding down, it was encouraging to watch people helping each other from their dispersed sand camping sites back onto the pavement. We expected to see a lot of unhappy people in stuck vehicles wondering how to get out of the soft sand. Instead, Tom Thompson and Drew Williams were operating bulldozers and a large tractor, efficiently helping those that couldn’t get out on their own. There was plenty of patience and it was justly rewarded. Good job Tom and Drew!

The 2000 edition of Sand Fest was a much greater success than last year’s version, which was literally watered down by rain. An estimated 30,000 people attended this year. There were excellent hosts running each event and their organizational skills showed their experience. The weather was perfect, sunny with a cool breeze. The promoter, Steve Woolery, sincerely thanks all that attended in 2000. You treated the land with respect and left it cleaner than you found it. He looks forward to your return.

Speaking of returning; we anticipate Sand Fest 2001 will be held the second weekend in August at Umpqua Lighthouse State Park. Soooooo mark your calendars for August 10, 11, and 12 to have a Sand-Blast!