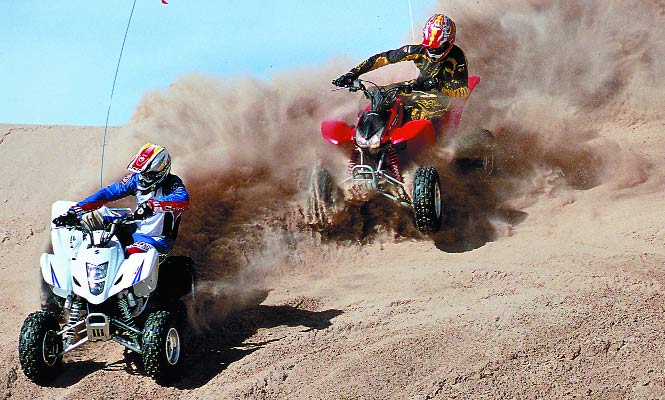 For 2005, both Honda and Suzuki made significant changes to their popular 400cc trail quads. Honda’s most noticeable change to the 400EX was with the front-end bodywork. They gave the seven-year-old EX the same front nosepiece and light assembly as their 450R race quad. For 2005, the 400EX is available in red or yellow. As far as mechanical improvements, the Honda got a much-needed feature; reverse, and they also changed the transmission gear ratios of the forward moving gears and final drive sprockets. Up front the countershaft sprocket was raised from a 14 to a 15. Out back the rear sprocket was also raised a tooth to 38. Internally, the gear ratios were bumped up slightly across the board.
Back when Honda released the 400EX in the fall of 1998, we didn’t complain much about the lack of reverse. At the time we were so excited that someone had released a new sport quad we didn’t have room to be picky. But after Yamaha introduced the Raptor and then Suzuki came out with the Z400, we got very used to having reverse on high performance trail quads. It quickly became the standard. So much so that we took points away from Polaris for launching the Predator without reverse. Polaris has since added it to their two Predator models.

The reverse procedure on the Honda is the same as it is on the competition’s machines. After turning a knob on the right front fender, you downshift past first gear for reverse. Then all you have to do is shift up to get back into the forward gears. The top speed in reverse is limited to less than ten miles per hour. The Honda also received a new rear L.E.D. taillight assembly.

NEW FOR SUZUKI
In addition to Suzuki’s new blue and white color scheme this year, the Z400 received some mechanical improvements. Suzuki has been dominating the National MX circuit with the Z400 in the hands of Doug Gust. Now they are using what they have learned on the track and are improving the Z Quad. 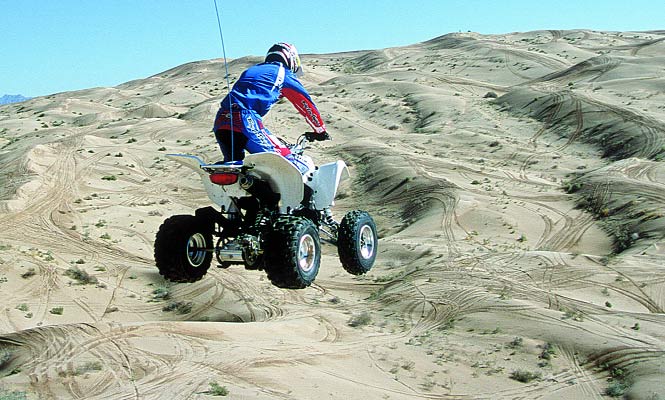 Whether it’s on the ground or in the air, the Z400 feels light. We could soar off this dune at Glamis with complete confidence.

From the outside you’ll notice that the ’05 Z400 now has piggyback reservoirs on the front shocks. The reservoirs not only hold more oil, they allow for compression and rebound adjusters to be incorporated. Plus, in most cases, an external reservoir will allow for more travel out of the same length shock. To our surprise, Suzuki claims travel was not increased. Another major change Suzuki made to the 400 is they enhanced the performance of the exhaust and intake camshafts. An extra clutch plate was also added.
The Z400 also received a new 37mm carb featuring a throttle position sensor which is suppose to increase throttle response. The 2004 Z400 carb measured 36mm and the Honda 400EX carb is 35.5mm.
All of these improvements are a welcomed sight. However, the only real issue the public and the Dirt Wheels testers ever complained about on the Z400 was that the stock frame was weak. The frequent place to see failures was near the front shock towers. Although Suzuki did not announce that any improvements were made, they were.
Four steel gussets were added to the frame and an aluminum plate was added to the rear sub frame. One pair of gussets was placed in the problem area directly below the front shock towers. The other Band Aid was attached on the lower part of the frame just below the oil tank’s mounting tab. This should help solve the problems that a typical aggressive trail rider would face.
To combat the added weight of the front shock reservoirs, the Z400 went on a diet for the new season. The steel front bumper, rear grab and gear shifter were all swapped out for aluminum units. The valve cover, clutch and ignition covers were also switched out for lighter (magnesium) products.

SPECS
Prices on both machines have risen for 2005. The tag on the Honda grew from $5299 to $5799. Suzuki also raised the price of the Z400 to $5799 from a price of $5699. Suspension numbers remain very close with 9.1 inches of travel in the rear on both machines. Suzuki has a slight edge up front with 8.5 inches verses 8.2 for the Honda.
With the extra hardware in the tranny, Honda’s weight figures rose from 375 pounds to 386. Thanks to a healthy diet of exotic materials, Suzuki’s numbers stayed firm at 372 pounds. Other than these slight changes, both machines retain the same specs as their older counterparts had.
Back in August of 2002 we did our first shootout of these two machines. For that test we also included the now defunct Cannondale quad. The winner was overwhelming chosen to be the Suzuki Z400. That current version of the Cannondale was second and the Honda 400EX was not far behind in third.
For this shootout we are going to line em’ up again and see if the new changes to the 400EX helped it enough to give the Z400 a run for its money. As for the Cannondale, its new owner Dinli claims to be working on its re-release, but there’s no telling when that might be. We are not waiting.

COMPARISON
Both the 400EX and the Z400 have the start in gear feature but only the Z400 will start-in-reverse. The Honda will crank over but not fire up. The other drawback to Honda’s starting procedure is that the choke lever is hard to find. It’s carb mounted and hidden behind a frame tube under the rider’s seat. Suzuki’s extra clutch plate doesn’t seem to affect the feel of the lever. It is still buttery smooth. 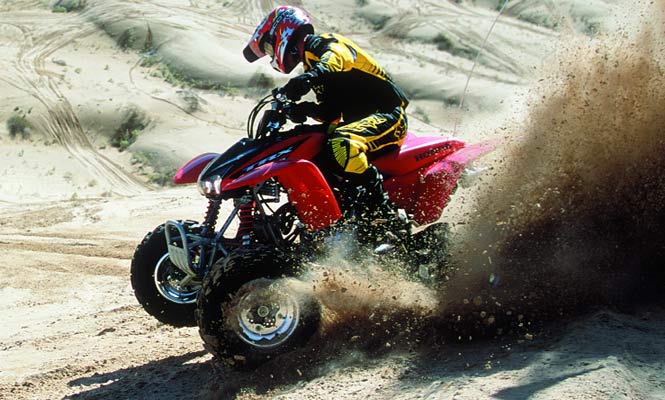 The 400EX and Z400 corner equally as well on hard packed surfaces. In the sand the Honda feels heavy and is hard to sling around.

Each manufacture essentially took versions of an existing dirt bike engine and modified them for ATV use. The Suzuki engine is far more advanced. Its most notable features are two cams verses one and liquid cooling. Both machines have fairly quiet mufflers out of the box. In recent tests we have shown that an aftermarket exhaust does wonders for the Z400 while only slightly helps the Honda.
The new gear ratios on the Honda are a slight improvement. It feels like it accelerates quicker and pulls better on top end. Top speed remains at about 65 miles per hour while the Z400 pushes 70. With perfect traction the Suzuki will still beat the Honda by at least a length in a hundred-yard drag. On slippery ground, the Honda’s mellow power tracks better and can hold its own, while the Suzuki tends to spin its tires wildly.
In the sand, the Suzuki was always ahead; it accelerates quicker, wins all of the drag races and is much more comfortable to ride. Although it is only fourteen pounds heavier, the Honda feels very heavy and underpowered compared the Suzuki. The Suzuki feels like it floats across the sand.
The power from the new cams and carb are mostly felt in the Suzuki’s midrange. From half throttle up it really has improved acceleration. However, it seems to take away a little power from the bottom end. The Z400 is a quick rever and wants to be revved. We imagine the increases will be even more noticeable with an aftermarket exhaust and jetting upgrades.

SUSPENSION
The suspension on the Z400 is now on par with the Honda 450R and the Yamaha YFZ450. It is fully adjustable front and rear and soaks up the bumps very well. If the Z had these front shocks on it in the beginning, maybe there wouldn’t have been so many broken frames.
The shocks worked great out of the box. The only adjustment we made was softening the compression five clicks front and rear for the dunes. While the 400EX’s suspension is not bad, it’s not great. When we won the Baja 1000 back in 1998, the shocks were the only things we changed aside from the muffler.
We went with a set of shocks from Works Performance that functioned great with the stock A-arms. The stock front shocks provide good damping for casual trail rides but do not offer any adjustment except for preload. The rear reservoir-equipped shock offers full adjustment. The new shocks on the Z400 are a huge improvement and night and day better than Honda’s equipment.
The chassis and handling of each machine remain the same for ’05. They both turn as well as any trail quad out there. In fact the frame geometry is very similar on both. With equal motors we would be hard pressed to find a clear winner in this arena.
However, one component, the seat, is much more comfortable on the Suzuki. Plus it removes in a snap. On the Honda, the seat is connected to the rear fenders. To access the air filter, you have to remove the entire assembly, and it is tricky to re-install. In Honda’s defense, the seat stays on. We have lost several seats on Z400’s during competitions due to the subframe flexing. Now we use a hitch pin and extra clip to keep it in place when needed. The extra gusset on the 2005 sub frame should help keep the seat on as well. 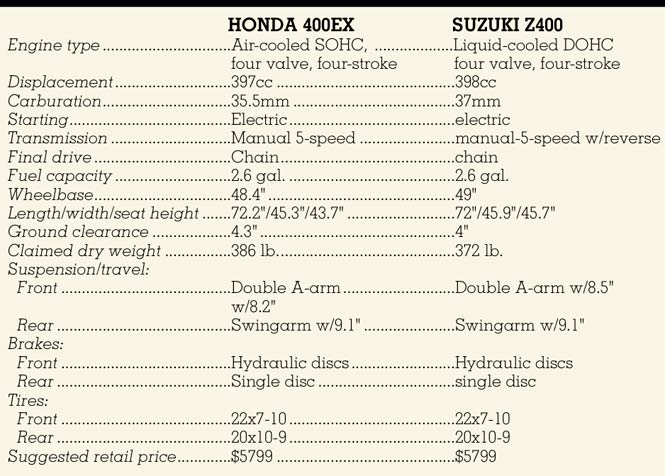 CONCLUSIONS
Unfortunately for Honda, its upgrades don’t really make the quad any better when it comes to real world riding. Even the gearing changes are hardly noticeable. Some may think it looks better.  But we didn’t even like its nosepiece when we saw it on the 450R for the first time. However, it does look better in this case. The improvements are hardly worth the extra $500 price increase.
As dominatingly as Doug Gust won the 2004 ATVA MX national championship, for 2005 the Z400 smokes the 2005 Honda 400EX in this contest. For the same price as the Honda and an extra $100 over last year, you get better suspension, more potential out of the motor, and a stronger chassis. Now that’s worth trading up to a 2005 Z400. It’s a winner.

BALLANCE BREAKS THROUGH AT THE MAXXIS GENERAL GNCC-MARCH 15