q At the end of 1989, Honda was assembling the last two-stroke TRX250R quad. Suzuki continued to produce their 250 QuadRacer until 1992. With Gary Denton and a few other riders at the controls, the Suzuki 250 made a presence in the GNC Motocross and in stadium racing. In 1987, Gary won his first of eight GNC MX Championships aboard a Suzuki. In 1993, Kory Ellis gave this two-stroke its final major win at the San Diego, California, round of the Micky Thompson Stadium Series. And, unless you have been living under a rock, you know that Suzuki’s LT-R450 has dominated the National racing circuit, winning the two most recent GNCC Championships and the last three GNC MX Titles.

That brings us to our latest test in a series of two-stroke versus four-stroke machines. This month, we gathered up a cherry 1991 QuadRacer 250 two-stroke and put it up against a new LT-R450 four-stroke. To make sure each machine was running its best, we let the engine gurus at Duncan Racing (DR) go through the motors just as if you were freshening up a used machine. We also installed the same size ITP tires mounted on DWT wheels, and topped them both off with DR complete exhaust systems.

One of the biggest differences between an old two-stroke engine and a modern four-stroke thumper is the cost of an engine rebuild. Piston kits on a two-stroke are nearly half the price of what they are on a four-stroke. Building a race head or cylinder is also much cheaper on a two-stroke. Outside of the two-stroke combustion chamber, Duncan Racing charges $450 for a complete exhaust system. On the thumper, that same product is $200 more. You can buy a complete adjustable two-stroke head for $219. That price wouldn’t even get you new valves on the four-stroke.

To get the two-stroke looking good, DR had the frame, A-arms and grab bar powder coated by ECP Powder Coating in El Cajon, California. Precision Concepts rebuilt the stock rear and front Ohlins shocks on the old LT.

The stockers wore out 10 years ago, and the owner of this machine swapped them out with an affordable replacement. The old, brittle bodywork was replaced with new plastics from Maier MFG and topped off with graphics from a 1992 QuadRacer. According to Duncan’s sources, OEM graphics from the 1991 QuadRacer are no longer available. Renthal bars and a Works Connection clutch rounded out the finishing touches on the two-stroke. Along with a DR exhaust system, our 450 specimen included Roll Design footpegs and heel guards, DR chrome bumper and a graphics kit.

We took the two Zukis to Glen Helen Raceway and put a days worth of laps on them. Two of our test riders also completed some fast laps in front of our stopwatch. Amazingly, our intermediate and expert riders clicked off nearly identical lap time differences on the two QuadRacers. They were both exactly six seconds slower per lap on the older two-stroke.

Upon ignition, the differences lit up immediately. Suzuki’s four-stroke 450 features electric starting with no backup. Some racers, however, do install kick starters and a smaller battery to save about 2 pounds of weight. To fire up the two-stroke, a long rearward rotating starter get things going quickly. With stock compression, things light up without much effort. Build the motor and add compression and that kick starter needs to be jumped on to get it up and running. Vibration levels are about the same on both machines.

The seating position has been greatly improved on the current QuadRacer. Although the cockpit doesn’t feel cramped on the old machine, the footpegs are positioned a little forward so tall riders will hit their knees on the handlebars when they are turned near full lock.

Throttle response on the thumper seams much crisper. The motor lets out a huge bark with every snap of the throttle. The two-stroke takes a little more time to warm up and it revs to full rpm noticeably slower—that could be the difference between fuel injection and a carburated machine. You can also change the revving and power characteristics of a two-stroke with different shaped head pipes.

On the track, it takes a little more skill to ride the older, yet lighter, 250 fast like the new 450. It can be done, though. Not only is the 250 a narrower machine, you really have to know what rpm range is giving you peak power. When you do, you tend to keep the throttle pinned a lot, feather the clutch and do a lot of shifting to keep up.

The four-stroke lets you be lazy. You can lug the motor a gear higher in most turns, roll on the throttle and build speed when needed. If you are not in the right gear on the two-stroke, the motor bogs and the power falls on its face. The huge torque numbers on the four-stroke translates to better traction when exiting corners. That brings us to turning. Even though the older machine is 3 inches narrower, it corners surprisingly well. Both machines have very light steering. What is different, though, is how the front of the 450 stays planted when exiting corners and goes where you aim it. The 250 has such a light front end, it pushes coming out of the corners. The front end is really light over jumps as well. Body position is very important on the two-stroke machine. However, the handlebar-to-footpeg relationship really makes you feel awkward when you are jockeying the machine around.

Twenty years has definitely made Suzuki’s QuadRacer much better. It has more power, better handling and even a better look. The 450 can easily win races and championships in any state of tune.

However, if you own an old two-stroke 250R or can find a good deal on one, it’s worth keeping. To solve the handling woes, a wider axle and different footpegs will do the trick. As for the engine compartment, the two-stroke power is exciting for the dunes, MX tracks and even trail riding. With power products from Duncan Racing, it can be even better. For all of your two- or four-stroke needs on any brand quad, give Duncan Racing a call at (866) 379-7223, or see their complete parts inventory at www.duncanracing.com. If you liked this comparison, stay tuned as we compare a cherry Duncan Racing Quadzilla 500 to a big-bore four-stroke LT-R450 later this summer. q 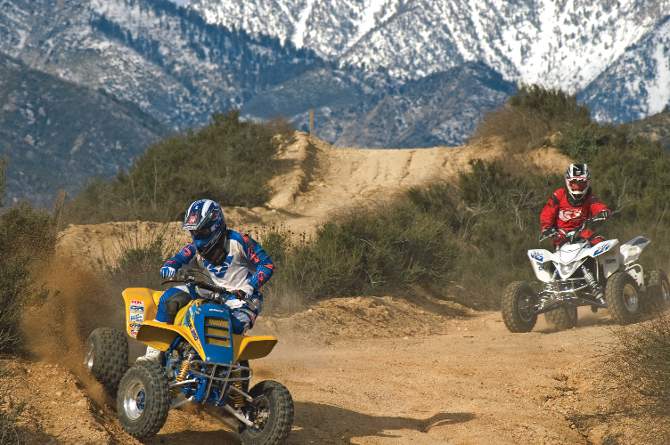 Back in the 1980s and ’90s, all quads were set up for trail riding at 46 inches wide. On the trails, we did notice the two-stroke Suzuki was using much more gas than the fuel-injected four-stroke. 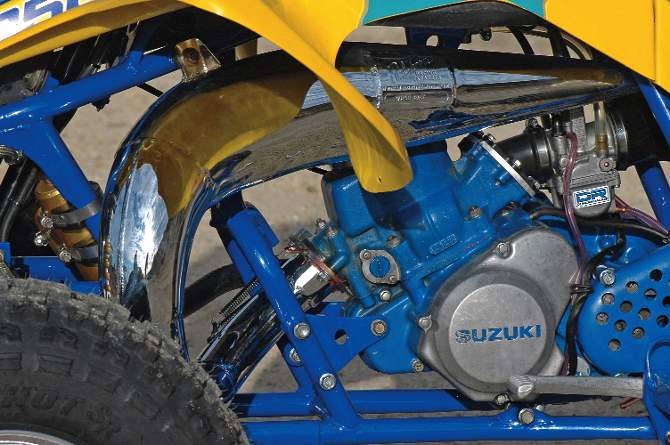 What we did lose with the two-stroke was a lightweight engine. It is also easier to work on than a modern-day race motor. Even though it has 200-less cc, horsepower differences are in the low 30s for the two-stroke and low 40s for the thumper. 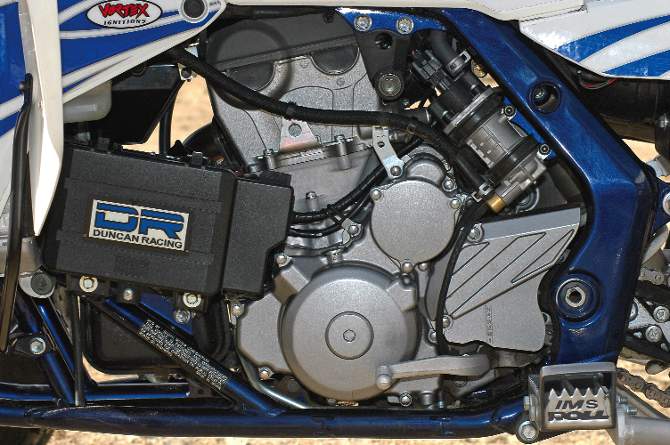 In the air, the two-stroke flies a little front-end high. To combat this, the rider has to get over the bars more and let off the gas slightly earlier. 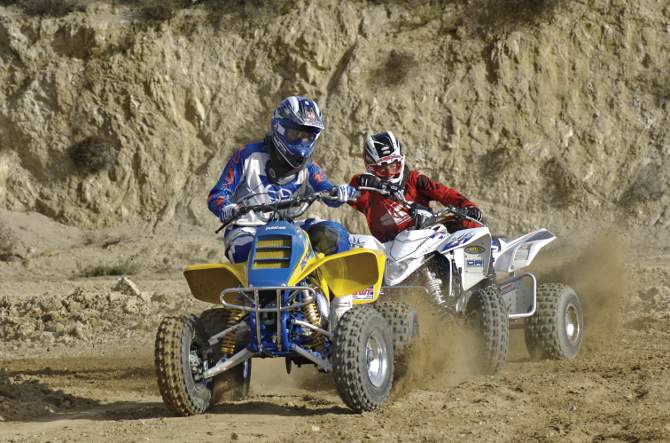 Four-stroke engines take up a lot more room in an ATV chassis. An external oil tank, battery and fuel pump are added components. A smaller battery can be installed along with a kick starter 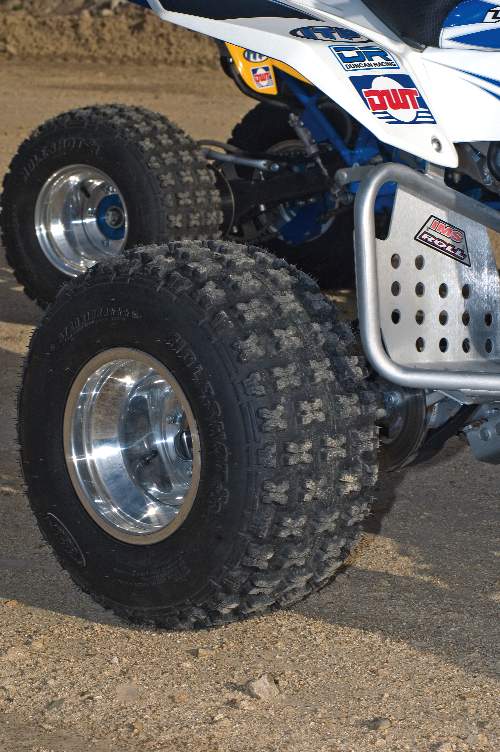 Stay tuned as Dirt Wheels will do another Suzuki shootout with Duncan Racing later in the year. And this time, we will test the old Quadzilla 500 against a big-bore LT-R450 in the dunes. 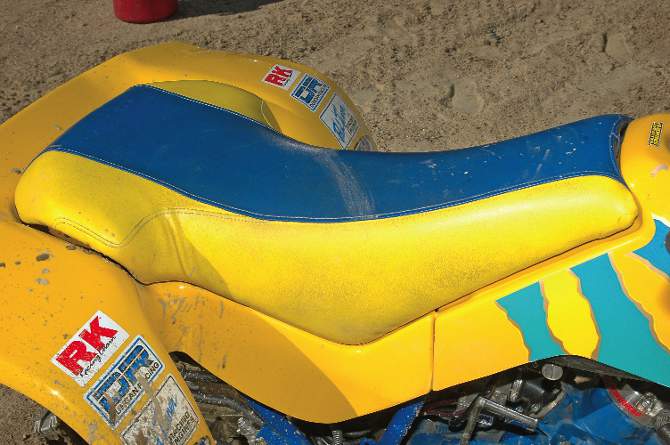 To even the machines out slightly, we equipped the two Suzukis with the same-sized ITP tires mounted on DWT wheels. In 1991, Suzuki actually used 21-inch tires, front and rear, making it tall by today’s standards. 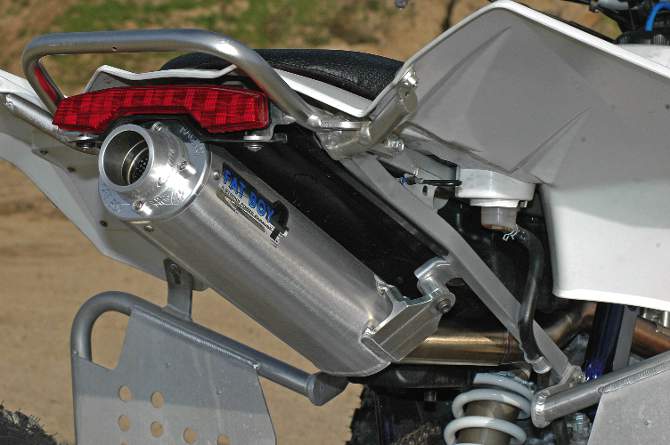 n 1987, Suzuki came out with the T-shaped seat on the LT250R. It was put back into service on the LT-R450, then Yamaha copied the idea and put it on the YFZ450R.
2 Stroke4-strokeQuadracerSuzuki
Share FacebookTwitterReddItEmailWhatsAppPinterestGoogle+

BLAST FROM THE PAST: Banshee Dyno Shootout