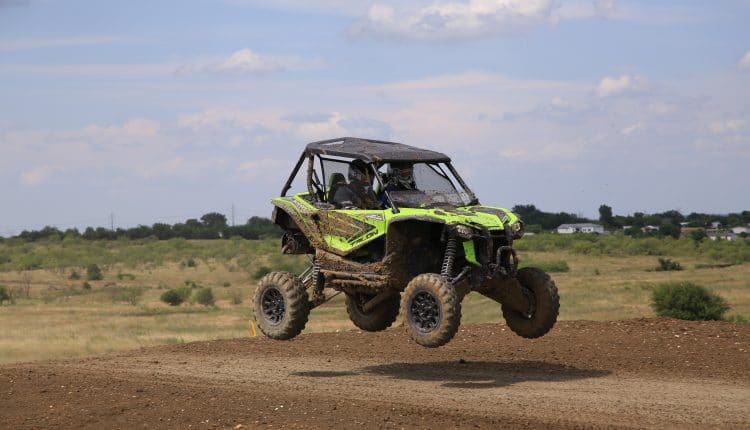 The turbos are here! For now the Jackson Racing turbo will be available as an after market install, not a box-stock turbo model. Unfortunately, they recommend setting aside 6 hours for a DIY install.
While the turbo kit is still undergoing C.A.R.B. testing, no dyno graphs are available, so they are claiming a general 60% power increase and 8 psi of boost. This comes as a full plug-and-play solution. No welding, no engine internals, and an included Jackson Racing ECU tool for tuning, refreshing, and remapped DCT shift schedules. All this and more for an estimated 5799.99 in fall of 2019.
We had an opportunity to take a turbo-fitted Talon out for a rip at TexPlex Park on the 4-mile short course track. We took the non-turbo out first so we could really feel the difference. Unlike most turbo cars, you don’t feel just more bottom or top or spool, it’s genuinely a much more powerful response. No handling prowess was lost, but we did notice a little extra in-cab heat after pushing the car for multiple laps around the muddy course. The shift points get remapped with the turbo, which makes the machine feel less frantic with way more torque.

Along with the Jackson Racing turbo, Honda announced a new division of Honda racing. Joining the UTV world means entering the world of SCORE, BITD and possibly TORC. The race components are said to be available as aftermarket to fit all machines. Honda racing rendered the race specs to be around 120 inches long and 72-74 wide. Because of the shifting sequence and Honda technology, this could be a big move in the race world. We look forward to testing more and seeing where else Honda will push the limits.