We recently had a Polaris RZR Dynamix four-seater break a tie-rod. We hadn’t had a specific incident we could point to that might have damaged it, but we could see where some rust intruded into the break, so it must have been hurt at some point. Also, we have wheels on the car with greater offset than stock and 30-inch tires. The different wheels widened the car from 64 inches to approximately 69 inches. Both the offset and the larger tires add more load to the tie-rods.

Be aware, there is no way to change the tie-rods without having to align the front end again. As a side note, we laid a lug wrench over the broken parts, used multiple heavy-duty zip-ties to strap it along the length of the two parts. We wrapped that in magic duct tape. That allowed us to drive very slowly to a road we could reach with a trailer. Now we have added four heavy hose clamps to our toolkit in case we need to limp back again. 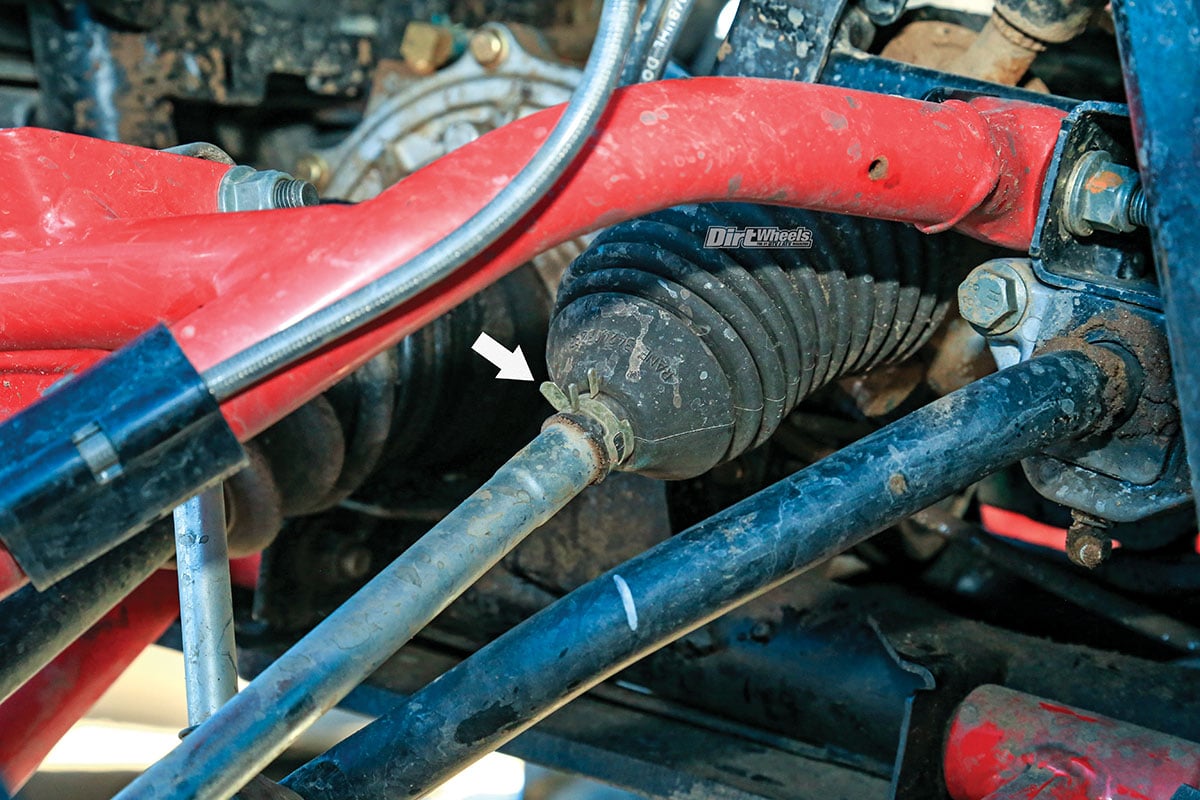 1. The first move is to use pliers to squeeze this spring clamp and slide it off of the outboard end on the protective boot. You can just leave the clamp rattling around for now and leave the boot in place as well. 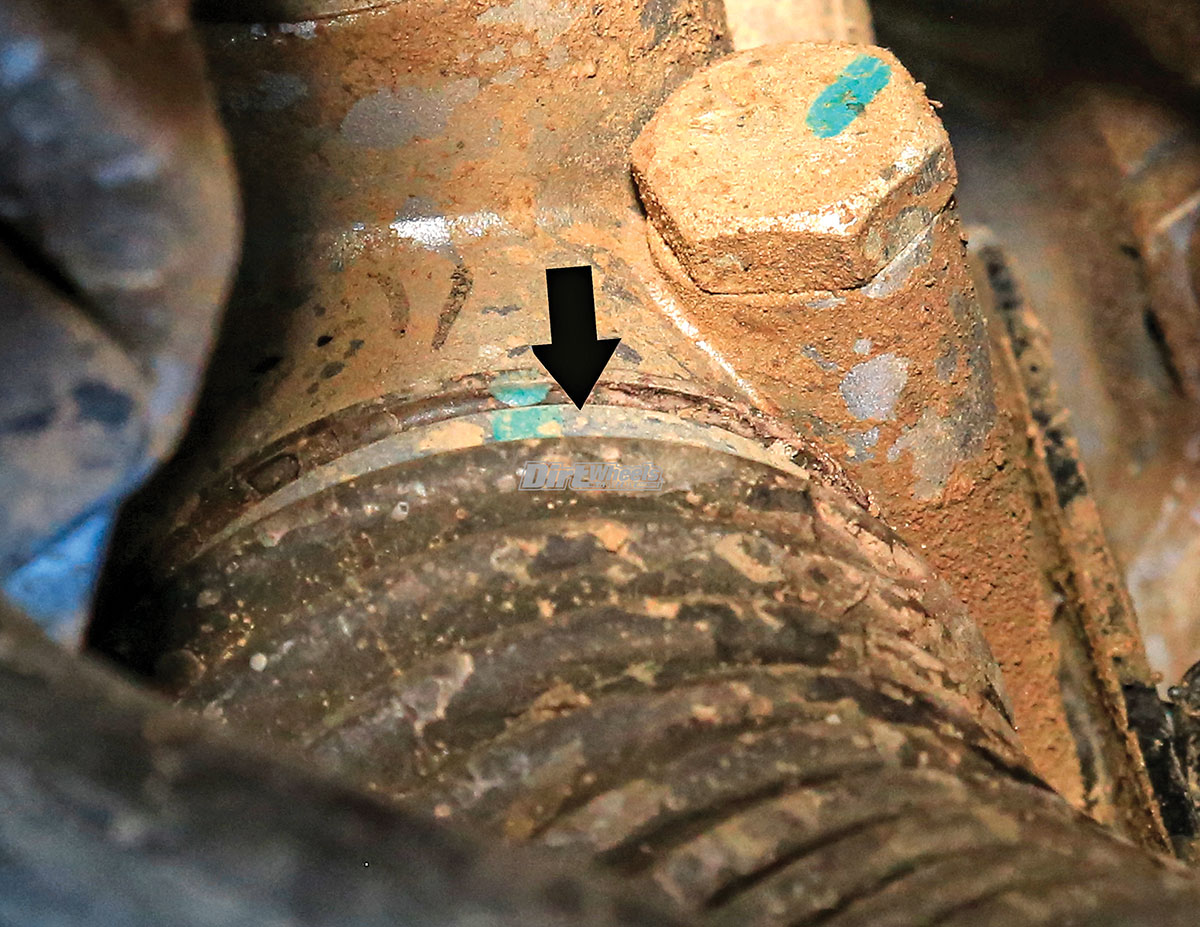 2. It will be tougher to see and reach the plastic tie that secures the inboard end of the boot. You need to use side-cut pliers to cut this tie. Be careful not to damage the boot or it will need to be replaced. 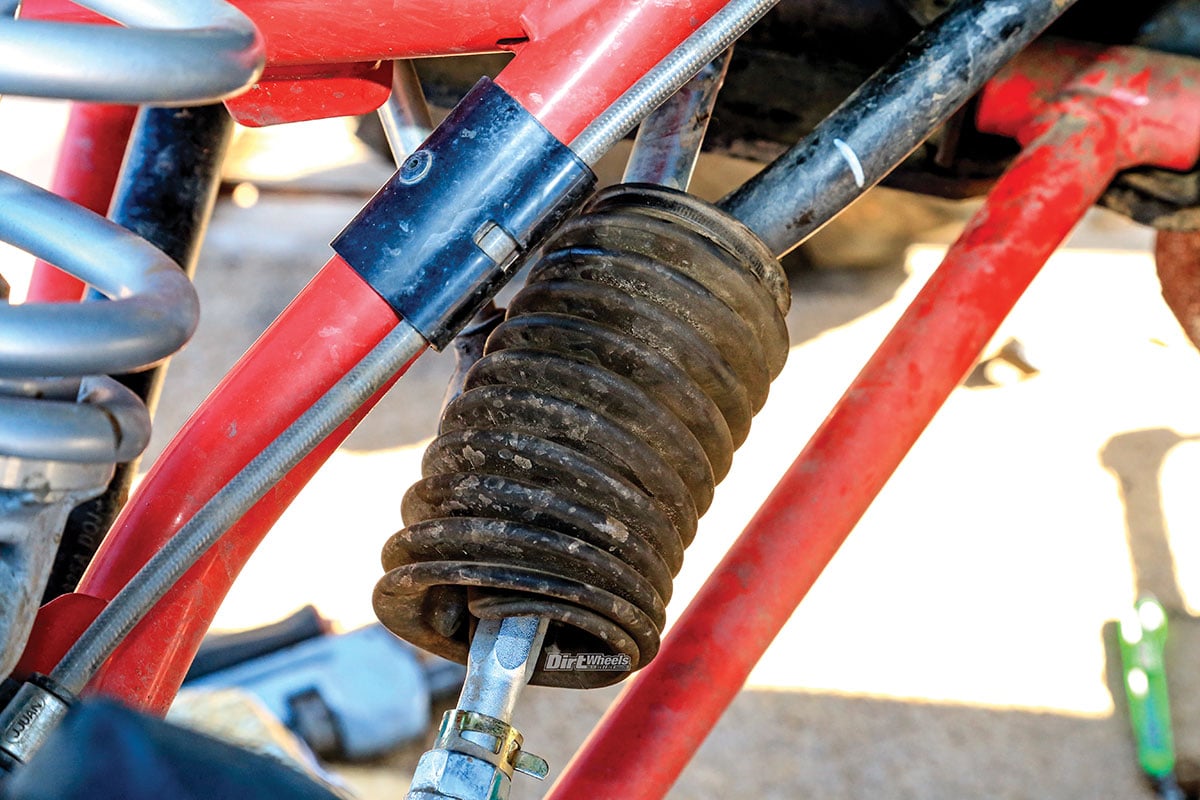 3. Pull the boot away from the steering rack. You’ll want it far enough away to be completely out of the way while you remove the tie-rod. 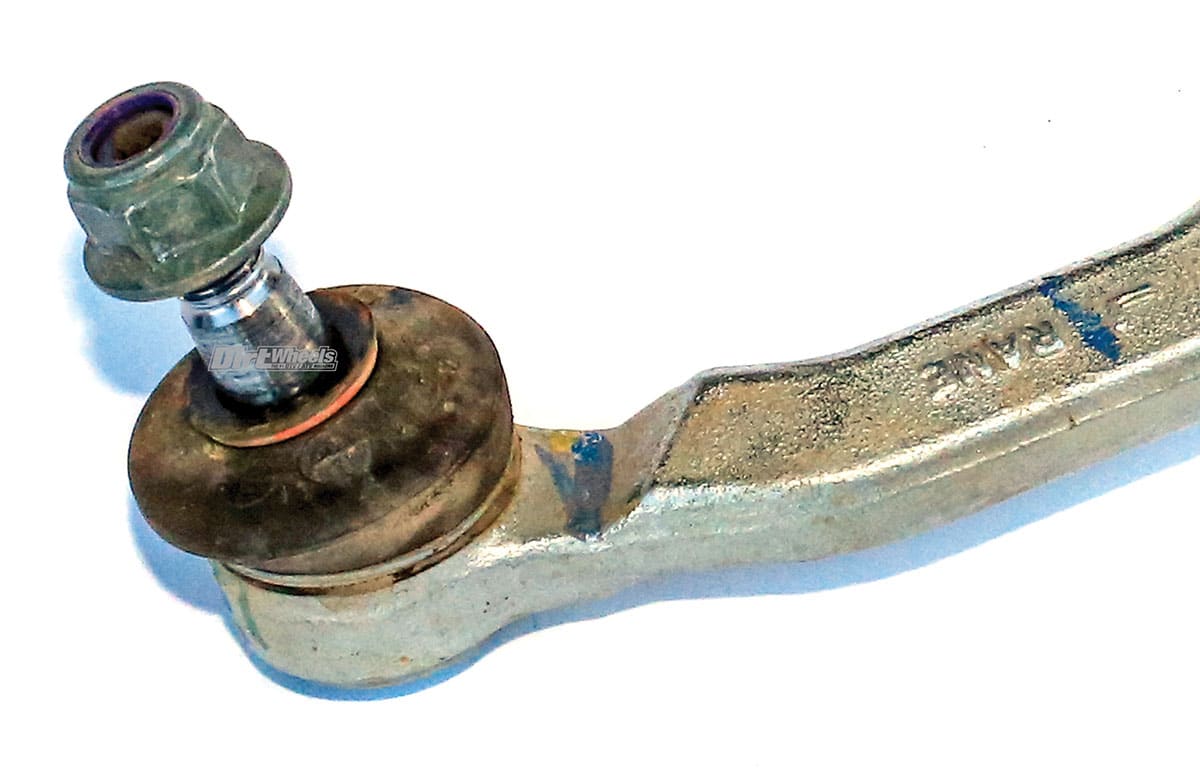 4. Remove the nut on the outboard end of the tie-rod. Sometimes this will be a bolt with a nut. Others have a tapered shaft. If the shaft starts to turn, tap the top with a dead-blow hammer to seat the taper again. 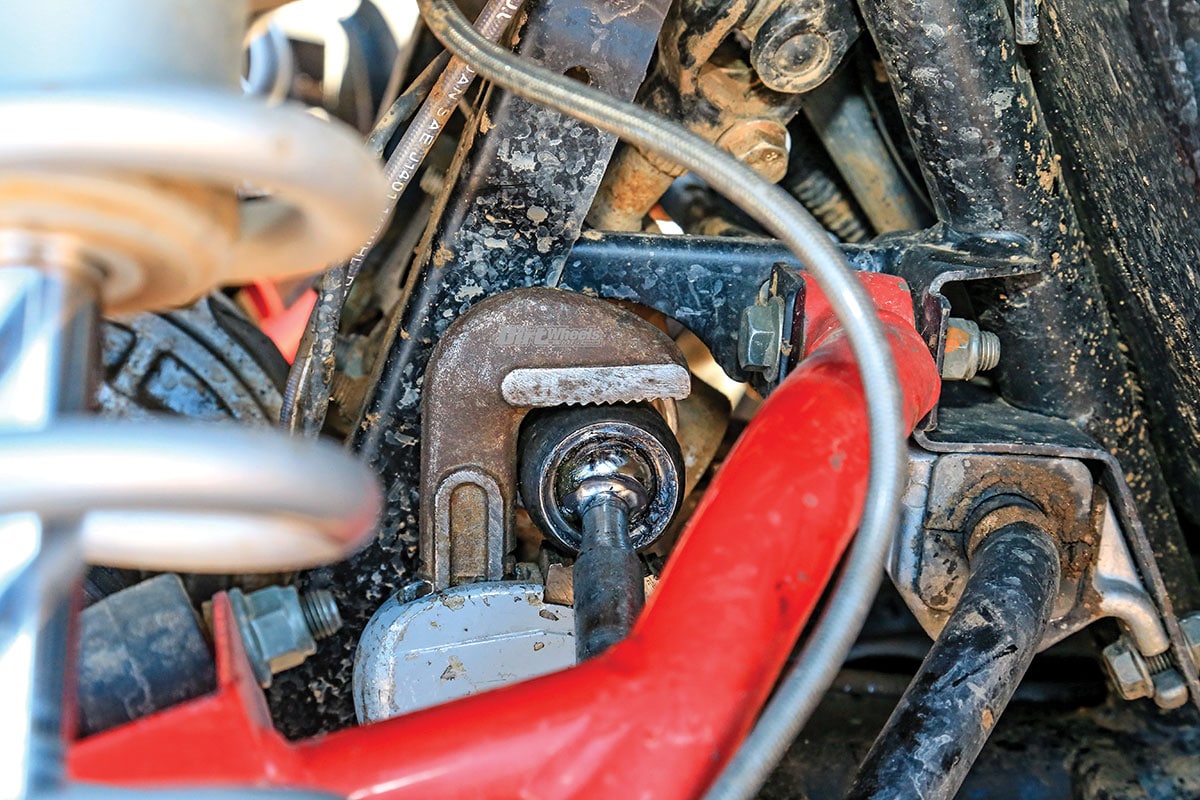 5. Our RZR uses a ball-joint connection to the rack. It had no wrench flats, so we used a small pipe wrench. It worked perfectly, and it barely marked the surface. We aren’t reusing this one, but will keep it as a spare.

6. You will need to separate the stock tie-rod in the middle to remove the boot. Be aware that this is a reverse thread, so it turns right to loosen it. After you separate the halves, the boot will slide right off.

7. You can easily see how much stronger and more rigid the Assault billet-aluminum parts are compared to stock. The new tie-rods attach differently as well. 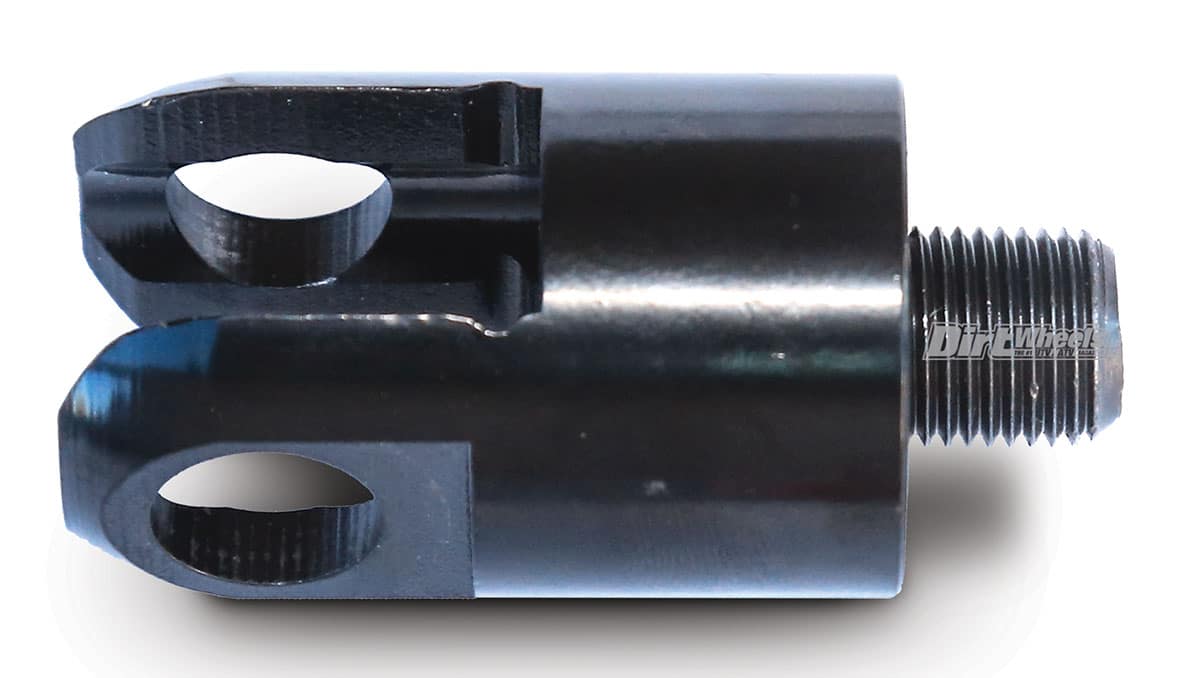 8. The inboard end of the new tie-rod uses a clevis and an Allen bolt. The Allen on ours was a 14mm head, and they aren’t easy to find. Use red threadlocker on the threads. Make sure that the clevis slot is vertical. 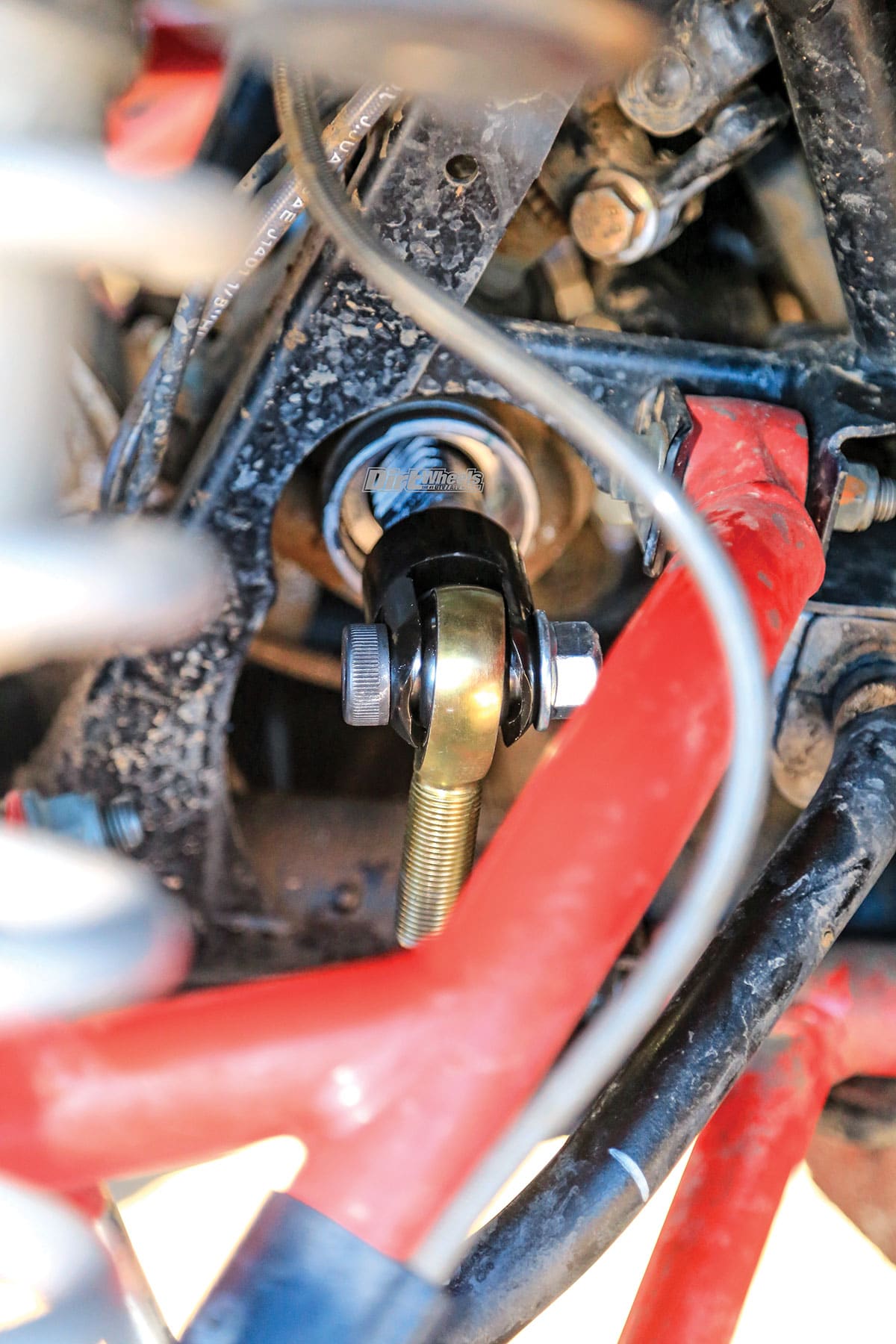 9. Once the clevis is mounted and torqued to spec, install the Heim end. You can go ahead and tighten it to specs at this point. If the clevis isn’t vertical, it can interfere with the tie-rod during suspension travel. 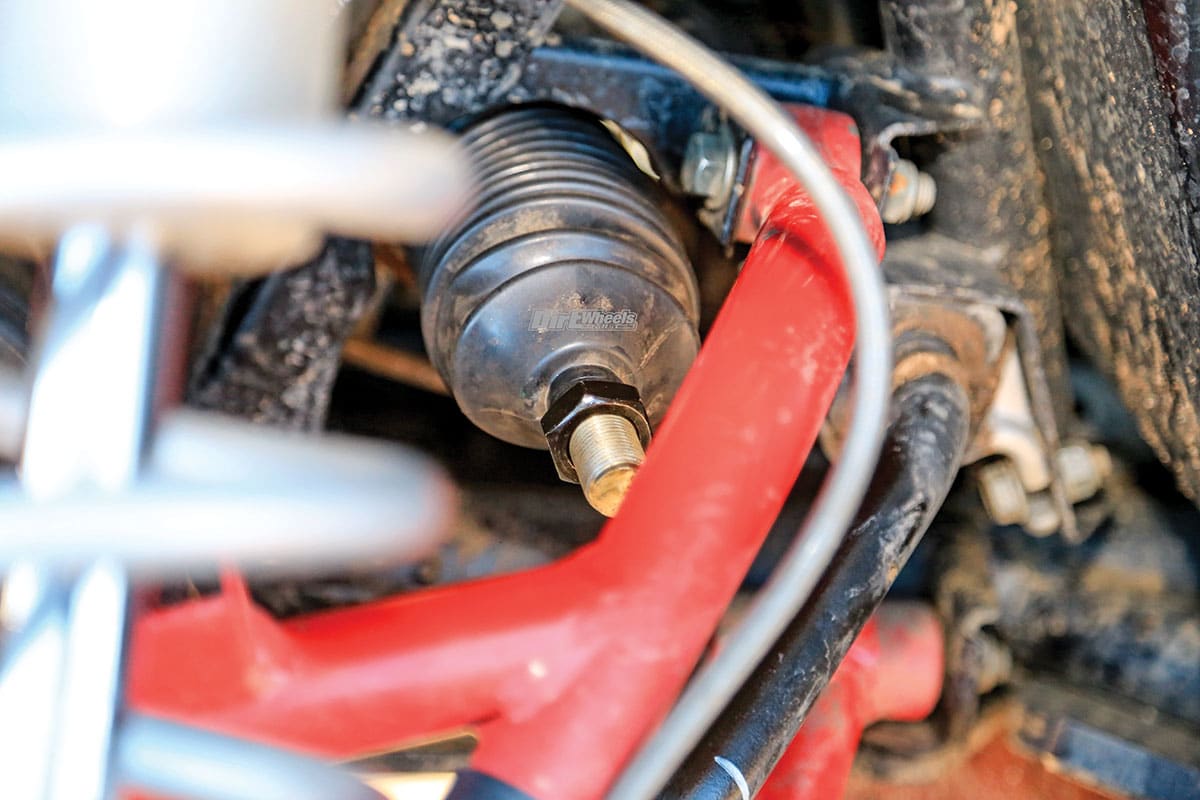 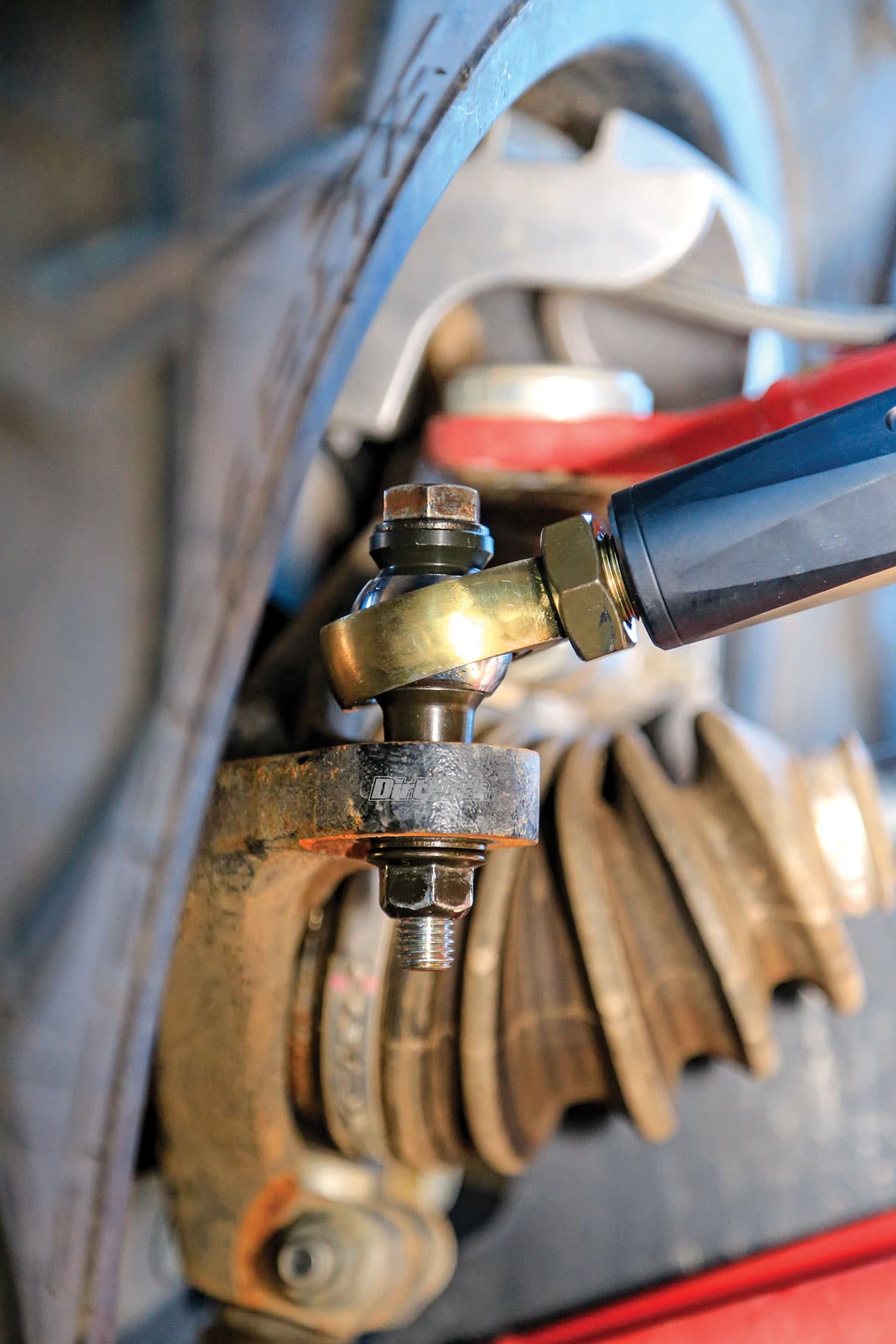 11. Thread the outboard Heim all the way in, then thread the tie-rod onto the Heim at the rack. To begin, thread the rod in until it is short as it can be. All of the adjustments will make the rod longer. 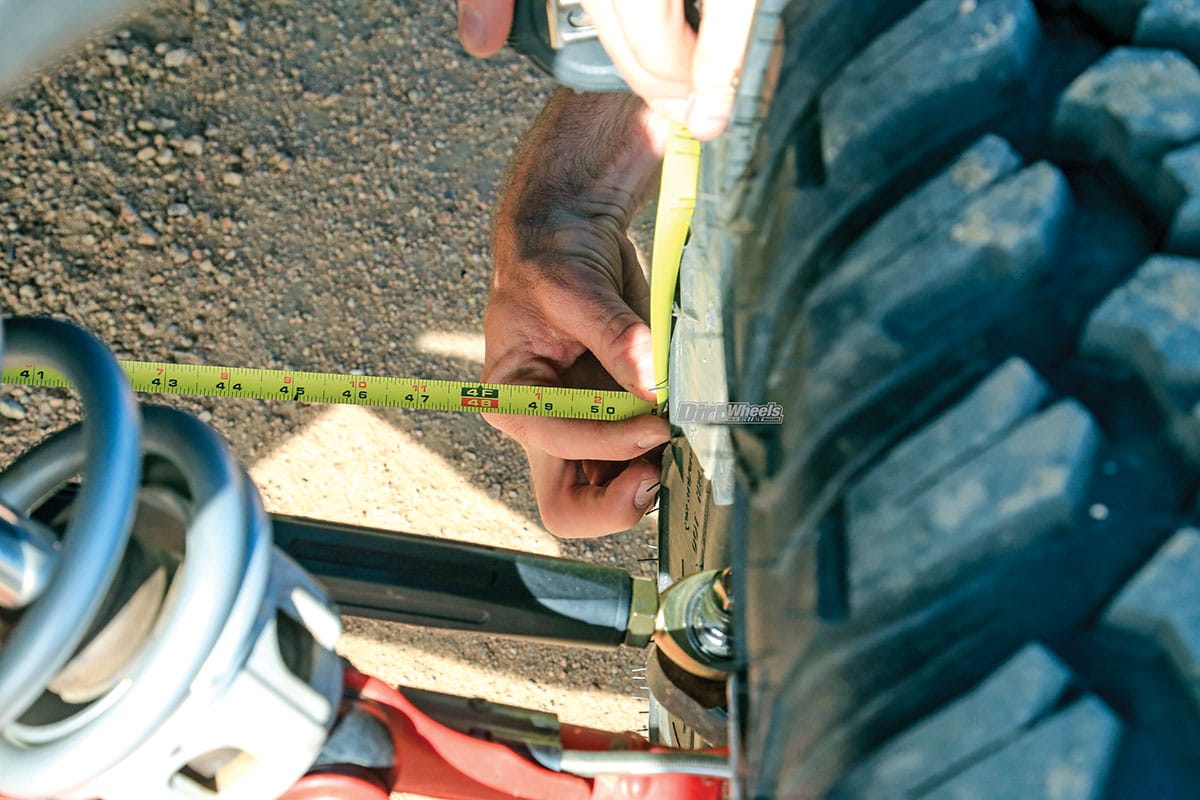 12. Measure from the same spot at the rear of both front tires. Try to keep the tape up as close to the frame as you can without getting interference with the tape. Keep track of the measurement. 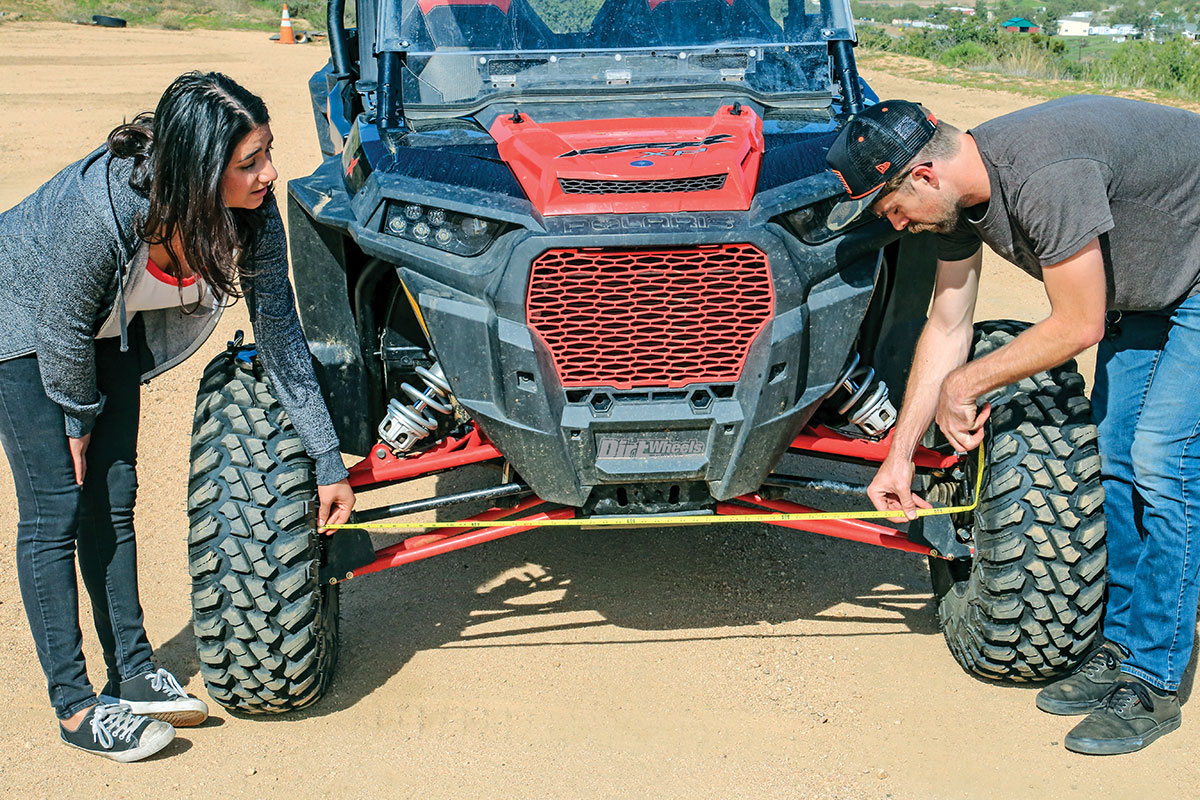 13. Measure from the same spot at the front of the tires. The measurement should be 1/8- to 1/4-inch less in the front so the car has a little toe-in. 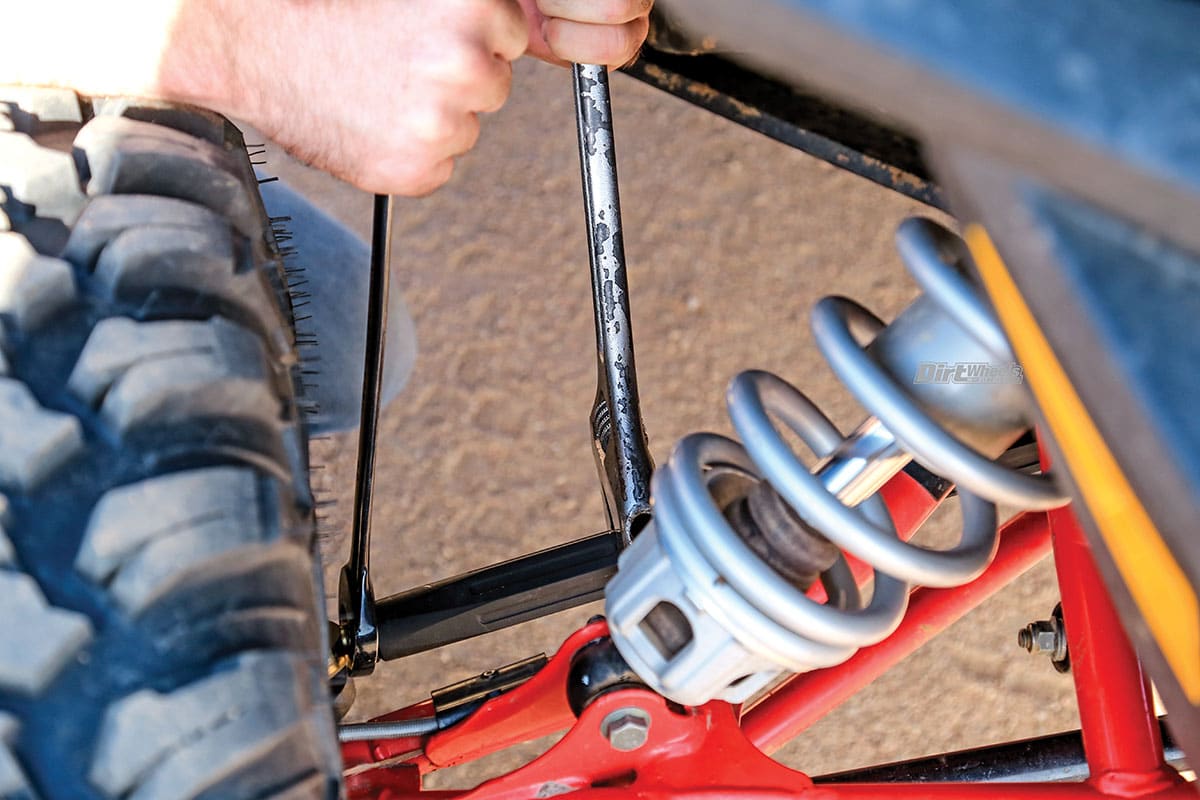 14. The Heims at each end have different threads, so you just turn the machined barrel of the tie-rod to adjust it. There is no need to remove one end. When the adjustment is correct, lock the lock nuts at both ends. Do the same on both sides of the car.