FOUR-STROKES FOR DUMMIES. Power is something humankind craves, but off-road riders lust for it entirely. We want engines that push more ponies and rocket our wheeled steeds onward with an epic forcefulness you won’t feel elsewhere. There are a variety of methods that will let your machine gain more power, but some come at a cost. We filled this article with all the info you need to figure out what will work for your horsepower needs with some help from Duncan Racing International.

Four-stroke engines are simple to some yet complicated to others. You put gas in the tank, change the oil and it goes, right? Those riders leave the maintenance and repairs to the mechanics, while the rest of us want to know how it all works.

The basics are as follows: The first stroke of the piston is downward, sucking in the air and fuel mixture provided by your engine’s intake and fuel system (fuel injection or carburetion) through intake valves in the cylinder head that the cam has opened. The second stroke of the piston is upward. The cam shuts the intake valves, and the piston compresses the air and fuel mixture for the spark plug to ignite. Once the mixture burns (not explodes) from the spark, the piston is forced downward in the cylinder during its third stroke. Upon the piston’s next upstroke, the exhaust valves open. The piston pushes the combusted fuel and air mixture (exhaust) out of the cylinder. These four-strokes, or cycles, turn the crankshaft that connects to your transmission, providing your machine power.

The goal is to make your engine perform these steps more efficiently if you want easy power increases that keep your engine reliable. If you want to improve your engine’s performance vastly in terms of torque and horsepower, you will need to get more radical with your upgrades. In doing that, you could cause weaker parts of your engine to fail with increased power. Sometimes it is better to play it safe for reliability, but power is addicting. 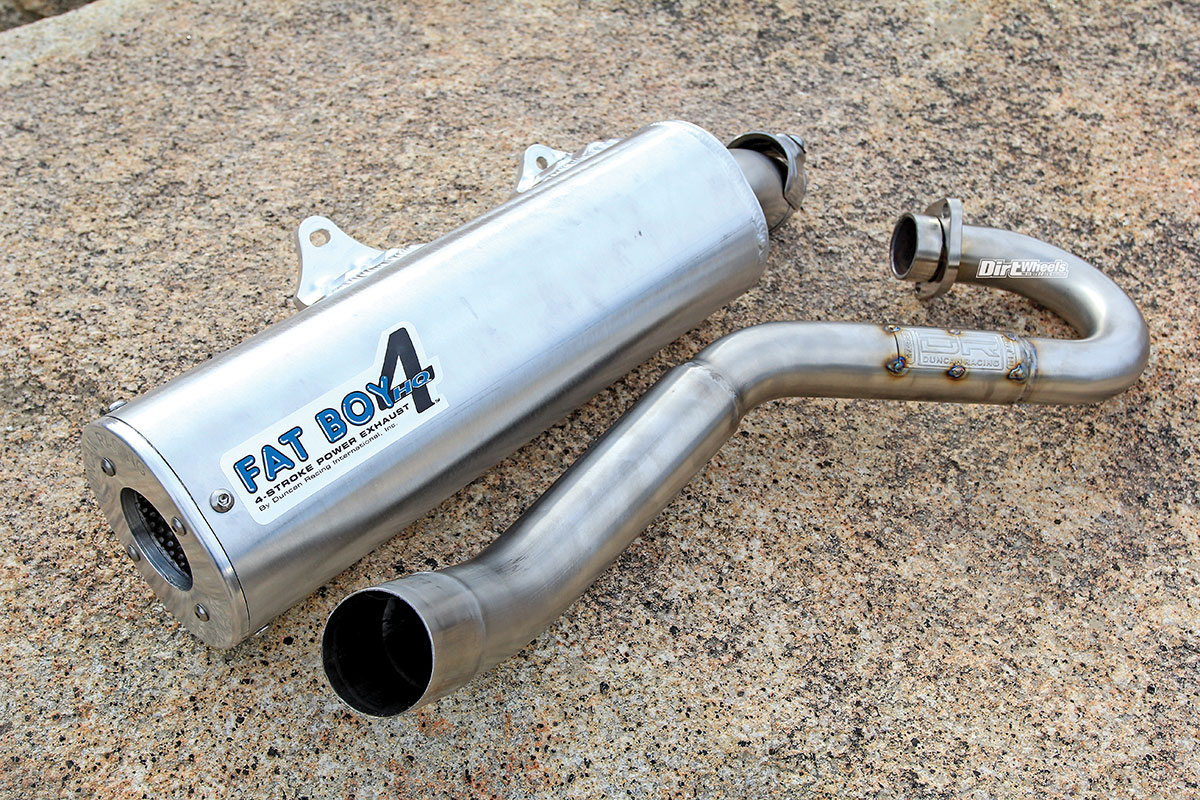 There are multiple things you can change on an engine to gain more go. If you install a higher compression piston, it will compress the fuel and air mixture more, which will make power, but often it will create more heat and may demand higher-octane fuel. You may even have to run expensive race gas, and the added pressure on the engine parts will shorten the lifespan. Running a big-bore doesn’t usually create heat or necessarily require high-octane fuel, but the added piston weight can cause vibration and can make some machines reluctant to rev freely.

Race fuel is more consistent in terms of quality than most pump gasoline, and it will prevent detonation and usually run cooler. It may not make more power, and if your engine doesn’t actually need the octane to prevent detonation or pre-ignition, it isn’t necessary. If you can afford it, you will have an extra margin of safety against detonation, and you may get cooler engine temps.

You can also install a camshaft that opens the valves farther or keeps them open longer. While you may gain more power, usually, the power will be concentrated at a specific part of the rpm range. You will almost certainly need valve springs and perhaps lighter valve-train components to maintain good valve control. A more aggressive cam is almost always tougher on the valve train.

You can also boost the rpm of your engine. This will cause your engine to gain more power, but since it will run harder, every part of the motor is susceptible to early failure. These more-involved upgrades have more risk than our next suggestions.

The best way to make power is to increase the efficiency of your engine. If you increase the amount of air and fuel in the engine, you must also ensure that you make it easier for exhaust gases to leave the engine.

There are a few ways to gain more and quicker airflow into the engine. You can port and polish the intake ports. This machining may open the ports up or reshape them to create efficiency. This is an exact science. Just enlarging the ports will hurt a modern engine more than it helps. Installing a higher-flowing air filter and intake system will increase the volume of air that can travel into the engine as well.

Next, you will want to increase fuel to the engine. If you have a carbureted engine, you can increase the jetting sizes in certain increments that complement the increased airflow in and out of the engine. Electronically fuel-injected engines will require a fuel tuner, like a Vortex X10 ECU. This allows you to increase fuel flow at different points in the power curve. It is safer to add more fuel to a four-stroke engine because it lets it run cooler. Too much will bog the engine down. If you lean it out and take away too much fuel, it will run too hot and fail.

The last step in the equation for easy and reliable power is a higher-flowing exhaust system. You may not be able to gain vast amounts of power with these options, but they will certainly give your motor a much better pep in its step in comparison to stock. These upgrades will generally cost less money than anything else and allow your engine internals to stay reliable.

This is where Duncan Racing International stepped in to help out with our article. We took our 2019 Yamaha YFZ450R to Loren and Leonard Duncan to help us tune it for reliability yet increase its performance. Yamaha’s sport ATV necessarily comes plugged up and held back from creating maximum power, so it can be legal off-road. If the machine is destined for a closed-course racetrack, you are legally allowed to make modifications.

DRI brought two exhaust systems for us to test. Their standard Fat Boy 4 stainless steel exhaust is very durable. It offers more power and torque, but it tops out early. Their newest exhaust system is tuned for high-performance racing. Different header-tube diameters and steps in headers can change where in the rpm the engine will make the best power.

Duncan paired with Vortex Ignitions to offer their X10 fuel and ignition controller with 10-map settings specifically tuned by DRI for the Yamaha. This ECU offers improvements for stock to high-performance engines. The Vortex increases fuel through the range, which is tunable on the ECU, along with changing ignition timing. It takes experts like Loren and Leonard to know how to properly adjust the Vortex to your motor’s specs.

And last, Leonard brought a Pro Design Racing Pro Flow air filter kit to install. The Pro Flow kit contains an air filter and assembly that is less restrictive overstock and increases airflow to the engine.

We started by riding the Yamaha in stock form. It felt like a normal YFZ450R, which is plenty powerful for most riders. To us, it seemed tame and contained, with lacking throttle response. After a few laps, Leonard installed the Vortex ECU, which added more fuel and increased the throttle response. That was a nice improvement to start. Next, the first Fat Boy 4 full exhaust went on the YFZ. We removed the stock airbox lid to improve the airflow to the engine. This will allow more dirt and debris to dirty your filter, so more filter changes and cleanings will be required.

The increase in power was instantaneous. There was much more torque down low and the midrange was far healthier. Power wheelies became easier, the throttle response was crisp, but it still felt like the Yamaha had more to give. Leonard replaced the stock air filter setup with the Pro Design Pro Flow kit. The differences were a bit more subtle the next few laps, but an experienced rider could feel the quad become easier to pilot and utilize its power. Leonard popped the seat off and turned an adjustment a click or two on the Vortex ECU and sent us back out.

This time the midrange livened up more, responding to the added fuel, but the high-rpm power still felt tame. It was time for Duncan Racing’s brand-new full-exhaust system that is tuned more for pure racing capability. Eager to try out the system before the public gets to enjoy it, we tried rushing Leonard. He almost made us sit in a corner until he was done with the installation.

The first lap with the new exhaust was an eye-opening experience. The bottom-end power is down from the original Fat Boy 4. That would have been a let-down if the midrange didn’t try to rip the bar out of our grip, and it pulled harder through the rest of the power range until we reached the YFZ’s rev limiter. The engine felt like it was modified internally instead of with bolt-on parts; it was that fast! We ended up cutting our laps short once we realized the power increase was overrunning the suspension’s capabilities in the rough stuff.

DO WHAT IS RIGHT

We learned quite a few things while researching and tapping into our sources of knowledge. Power isn’t a cheap or easy commodity. The bolt-on parts made a big difference, but if you want to beat all your buddies in a drag race up a massive dune or outrun your competition at the track, you might want to send your engine to experienced engine builders like DRI. They can machine and build the internals of your motor for high horsepower.

If you simply want more go, from a reliable engine, that is not finicky, we suggest bolt-on power with light tuning. Duncan Racing’s exhaust, an intake system, and a fuel programmer or carb work will get you there.

If you are knowledgeable enough to tune your engine yourself, we applaud you. You can always bolt on the parts and send your favorite ride to a tuner to make sure your machine is running as healthy as it can!

Dirt Wheels Table Of Contents May 2020

TOP 5 WAYS TO OUTFIT YOUR UTV FOR SUMMER