Well before GASGAS was part of the Austrian juggernaut, they were a Spanish brand trying to make in-roads into America. This is a retro test of two sports quads from a bygone era. If you were lucky enough to own one of these machines, or still do, send us some pictures and let us know what you thought about it. The Email is [email protected] 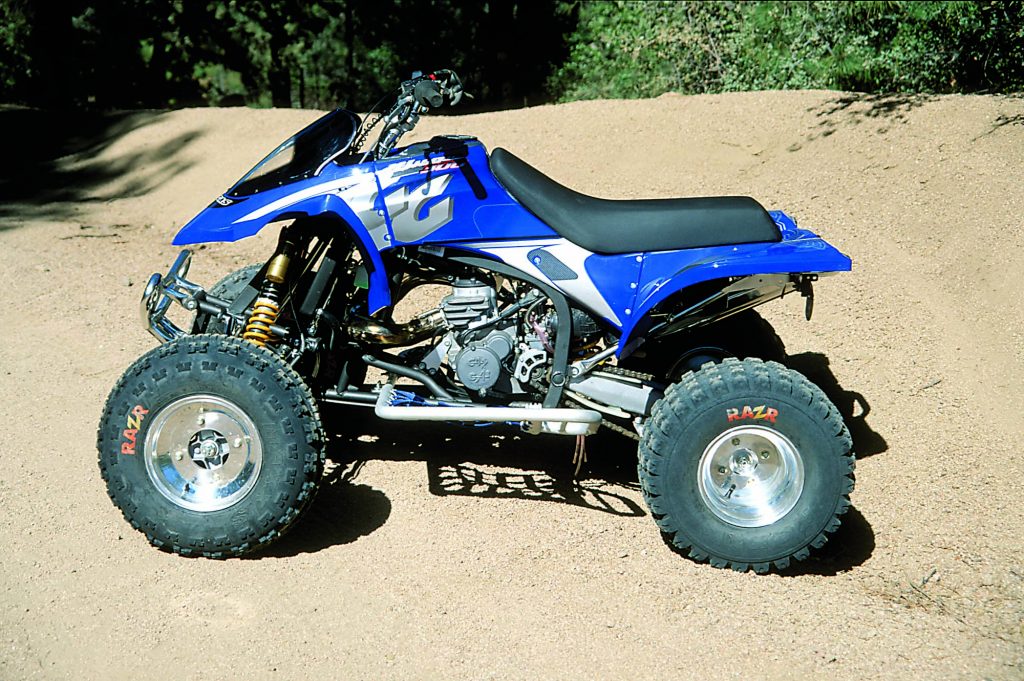 While the Spanish company sells up to 14,000 off-road motorcycles in the European and American communities, they only recently became involved in selling quads on this side of the Atlantic.

Introduced in late 2002, the first Gas Gas 300 quad came with a liquid-cooled, power-valved, 300cc two-stroke engine. It had a perky engine that ran extremely well and was very competitive. Unfortunately, that first effort lacked the proper suspension and handling package needed to be competitive on the harsh American tracks and trails it would have to compete on.

Instead of being discouraged, Gas Gas took all the advice they got from their dealer network and incorporated the various changes and recommendations into the 300’s design for the following year. The final result was an improved 300 two-stroke for 2003 with an added surprise. They also unleashed an all new, liquid-cooled, fuel-injected, 450cc, four-valve four-stroke powered racer, utilizing the same chassis and suspension.

This was well before Yamaha had released their all new YFZ450. With Cannondale’s sudden demise, the Gas Gas Wild 450 became the only production four-stroke quad to come standard with fuel-injection.

While a definite improvement over the original Gas Gas 300, it too lacked the refinements it needed to make it a standout performer its inaugural year. Now with the introduction of the new Yamaha ‘04 YFZ450 and Honda’s much anticipated TRX450R, Gas Gas knew they could not sit still with the development of their 300 and 450 sport quads.

NEW AND EVEN MORE IMPROVED FOR 2004

We hooked up with Gas Gas importer Juan Romero and arranged for a test ride aboard the latest and greatest versions of the 2004 Wild HP 300 two-stroke and the new and, we were told, much improved Wild HP 450 four-stroke. Here’s what we found out after taking these two new models out for an extended test ride.

The factory engineers paid close attention to their dealers’ suggestions for the ‘04 models. They took out the harsh and tight steering and overly stiff suspension that the ‘03 models came with. The GasGas two-stroke uses a 294cc liquid-cooled, two-stroke engine with a single Keihin PWK 38mm carb. The Wild 450 comes with a liquid-cooled, 449cc, four-valve, four-stroke powerplant. Both quads use the same Keihin carb. They also share a manual clutch, six-speed transmission with no reverse gear.

Two-inch longer Ohlins shocks hang off new design A-arms up front. Travel is a good ten inches in the front with 11 inches being available on the back end. Our test rides found that both quads are much easier steering up front than last year’s model. They both had lighter, more accurate handling and you could slide or rail corners fairly easily.

The overall feel on the longer Ohlins shocks made them more plush at high and low speeds than on last year’s quad. It was much better and smoother. We think the factory is finally figuring out what type of suspension settings that Americans favor. Also, the fast accelerating two-stroke motor has a fairly strong hit from the mid-range and up. Power is a bit flat on the very bottom, but it revs to the moon on the top-end. The 300 feels plenty fast with its close ratio, rapid fire, six-speed transmission.

Meanwhile, acceleration on the fuel-injected four-stroke was a bit different. At first, we were disappointed with the motor’s response when we nailed the twist throttle. But when we started shifting it early, and letting it pull a gear high, we became much more comfortable.

Even though we were riding at a fairly high altitude (3000-4000 feet) the fuel-injected four-stroke engine always seemed to have an abundance of torque. Unlike the two-stroke, it has a lot more grunt on the very bottom, and pulled steadily as the rpm increased in its meaty mid-range. It keeps pulling hard until it hit the rev limiter on the top end, where it stops cold. Once we started shifting it early and keeping it off the rev limiter, the ride was much improved.

That seemed to be the key to riding the 450 at a quicker pace. Shift it early and often, and let the monster torque do all the work. The handling on the 450 was sharp and predictable, with no sudden washouts, pushing in the corners, or swapping in the whoops. Both quads had fairly good manners in the rough and high speed sections we rode them in.

We came away much more impressed with the 2004 Gas Gas Wild 300 and 450 sport quads. The Wild 300 has a strong, if slightly peaky, engine with much improved steering and shock action. The Wild 450 has a ton of torque and is the only fuel-injected four-stroke readily available. Both quads fly straight and true off of jumps with very predictable handling, and a solid feel in the corners.

The new, longer Ohlins front shocks work much better than the earlier shorter versions these units came with. Braking on both quads is exceptional. They come with high quality Brembo double-piston calipers up front and on the back. They are so good, in fact, that you will want to keep two fingers over the clutch at all times when using these potent stoppers. Otherwise, you can easily stall the motor out under hard braking.

These two quads are race-ready right off the dealer’s showroom floor. They come with standard aluminum nerf bars, kill switches, Ohlins race suspension, detachable chrome rear subframes, Maxxis tires and ITP rims, full aluminum skidplate protection, and a choice of 48-inch or 52-inch width front and rear ends, directly from the dealer. The suggested retail price for the ’04 300 two-stroke is $8245 while the ’04 450 four-stroke goes for $9195. That is more than the YFZ450 at $6899 and the new Honda TRX450 at $6499. Are they worth the difference? We will have to wait until we can compare all four in a heads-up high-performance shootout in the near future. As always, stay tuned.

HOW TO BUILD A BRAND NEW HONDA SPORT QUAD