We recently had the joy of testing the 2017 Polaris RZR XP Turbo in the vast sandscape of the Glamis sand dunes in southern California. After a walk around of the Polaris, inside the confines of their 5th annual Camp RZR event, we learned about all the upgrades they changed for the 2017 Turbo and then got to drive it for the weekend. The new machine is fast and fun to drive and the improvements speak for themselves! In no specific order of favoritism, here they are! 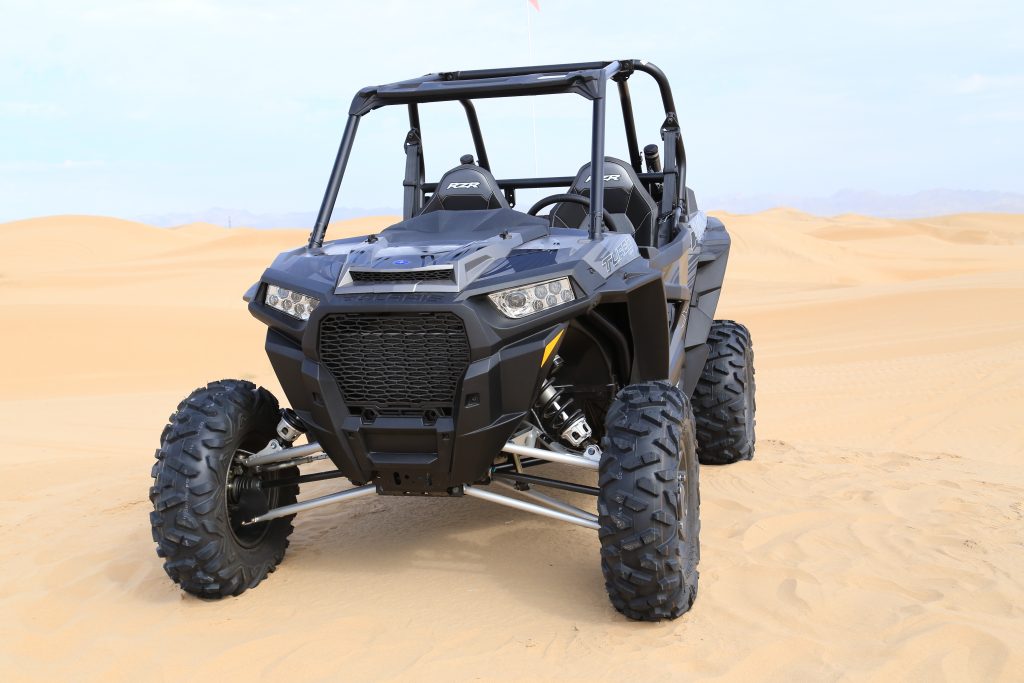 1) A LOT MORE POWER!
The engine has been modified to produce 168-horsepower through a upgraded engine components! Polaris changed out the spark plugs, incorporated a new head gasket to accompany forged pistons, high strength connecting rods and sodium-filled exhaust valves. New cam shafts were designed as well as high-flow fuel injectors and a new engine-management system helps keep the engine in check. 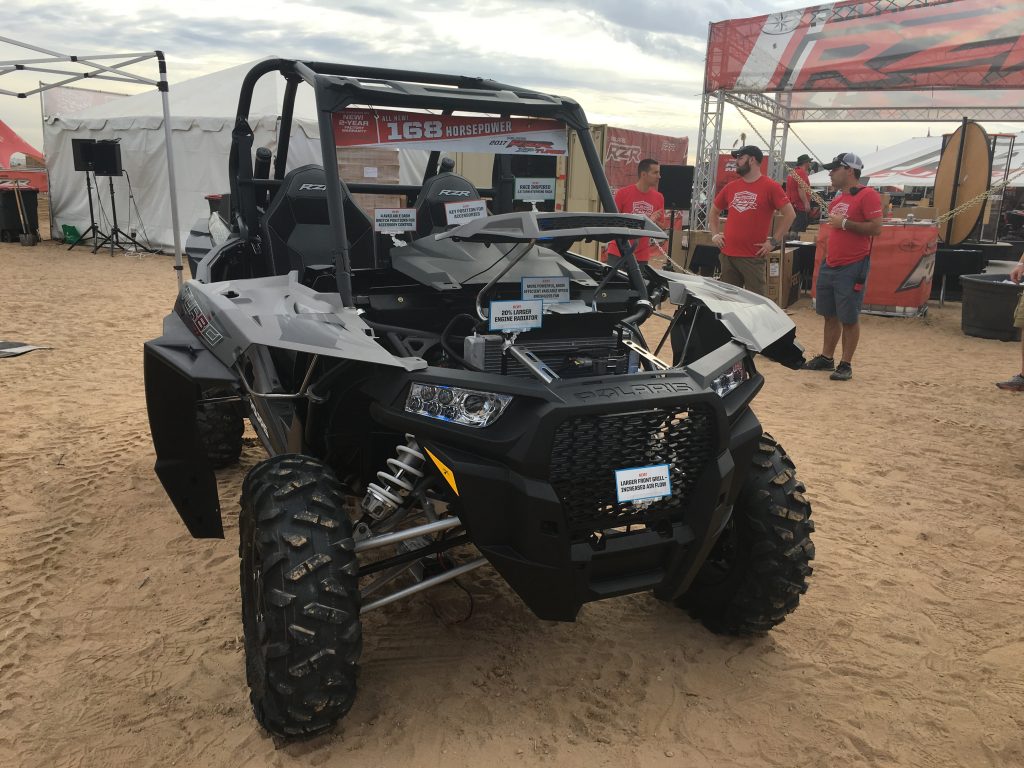 2) COOLER ENGINE TEMPERATURES
Polaris has been troubled with over-heating on their XP Turbo models from 2016 so they changed a lot of components to tackle the issue. The frame was widened up front to utilize a 20% larger radiator. The oil cooler was shortened in height to allow more air to flow to both the cooler and radiator through a much larger front grill. A new brushless variable speed fan has been added to aid in dropping the operating temps. 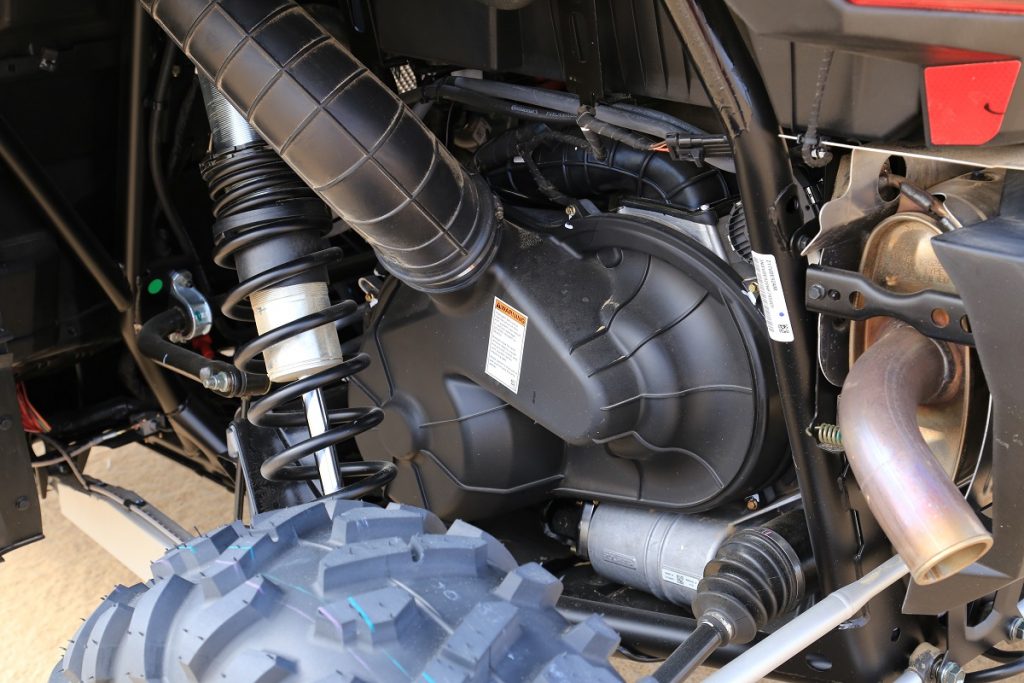 3) CVT UPGRADES
Aside from the new look of the front fascia on the RZR XP Turbo, the only noticeable part change would be the CVT and air intake vents. They are taller to provide a better intake surface area and to top that, they are double sided! You can purchase these new intakes for your 16′ model. The CVT cover has been redesigned to fit closer to the trans which they claim lowers temps by 30 degrees. Polaris paired that with a stronger and thicker drive belt, along with a stronger stainless steel shaft that the sheaves slide on that was once aluminum. 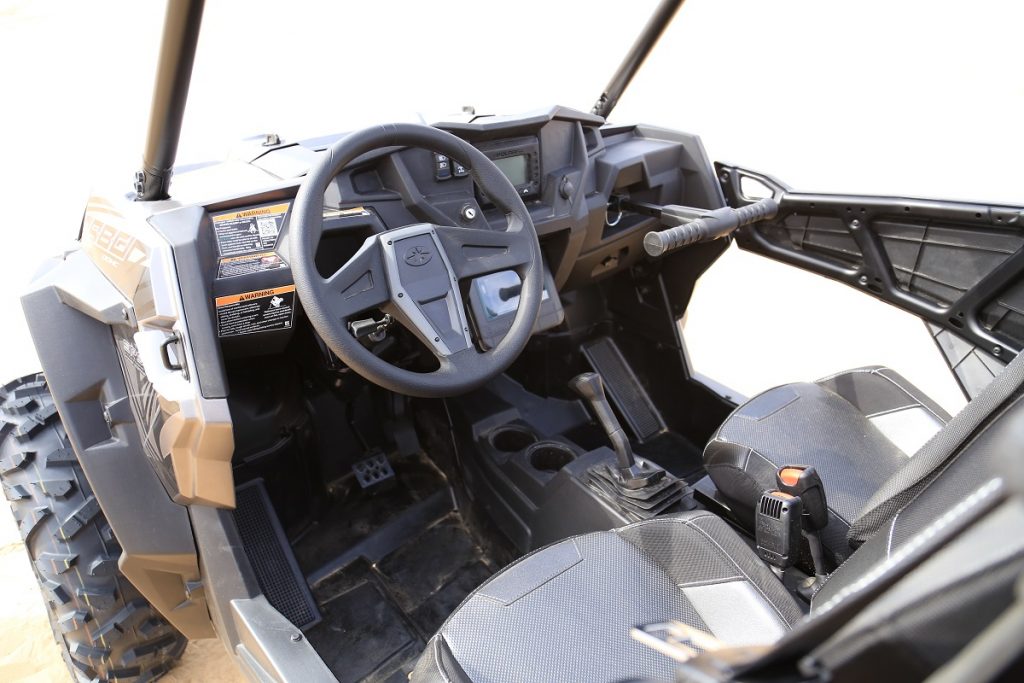 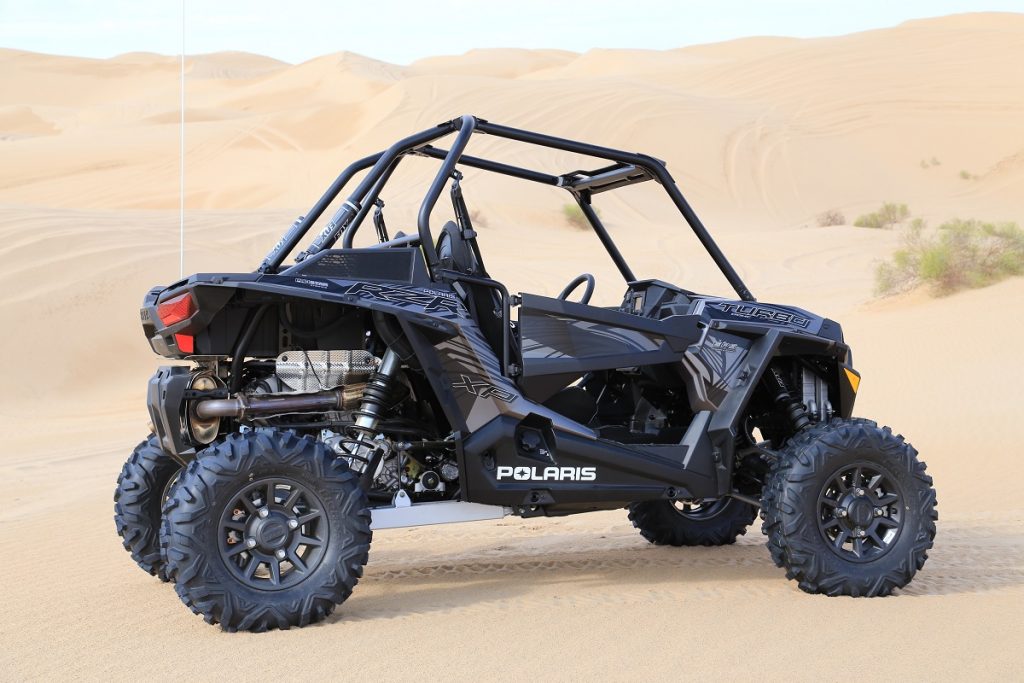 6) STRONGER REAR AXLES
For the sake of durability and strength, Polaris beefed up the CV joints in the half shafts (axles). Have stronger axles keeps you rolling and playing longer than you think. 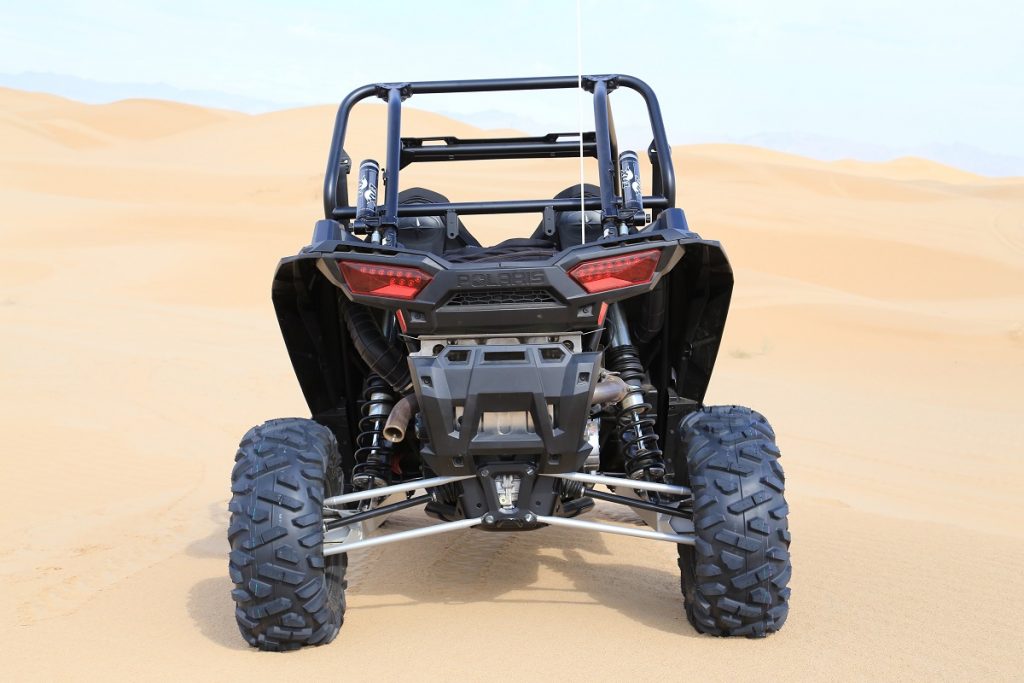 7) BEEFED UP SUSPENSION
Suspension has been a strong point on the RZR lineup. The Fox shocks on the RZR Turbo perform very well, but those aren’t the only components that make the suspension work well. The rear trailing arm system uses radius rods for strength and to keep the trailing arms from bending. Polaris changed the radius rode design from a solid bar to a tube type design. This actually adds strength and lightens the components.

8) REDESIGNED GAUGE
Polaris changed up the design of the instrument gauge over the 2016 model. While the functions haven’t changed, the shape and control of it has.

9) ACCESSORY POSITION
Another new feature of this machine is the added position of the key. Now you can conserve power by setting the machine to the accessory position and not have the electronic engine and fan components running while you listen to tunes. 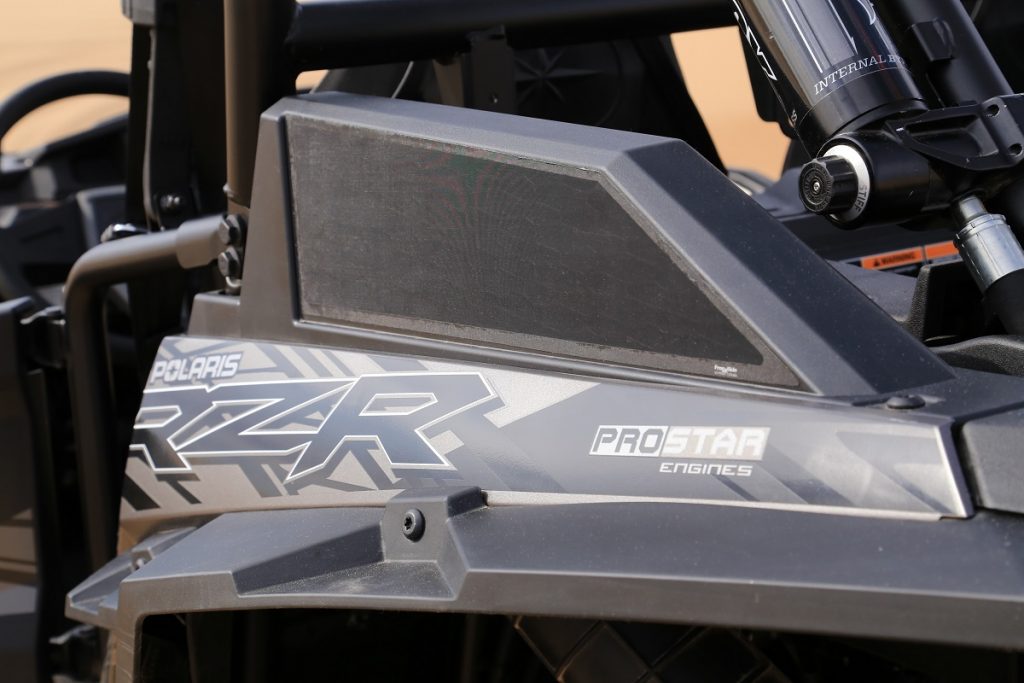 10) CONVERSIONS
With little trouble you can take the new front fascia of the 2017 Turbo and put it on the 2016 Turbo. The bigger radiator however wont fit the 16′ model, but the new fan will. The new CVT and air intake vents will fit on your RZR Turbo and XP 1000 models. The front rotors can be switched to the 16′ Turbo as well as the radius rods. 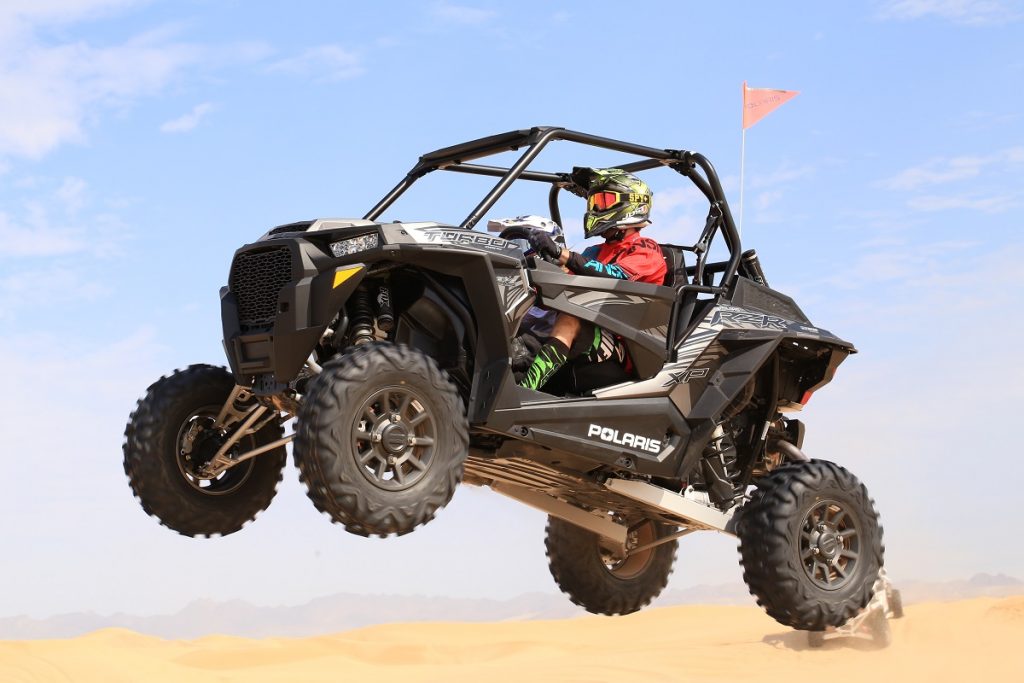