Polaris knocked the ball so far out of the park for 2020 that it must have burned up in the atmosphere. We have been patiently awaiting a company to add more to our favorite handlebar machine industry and Polaris delivered.

They introduced the 2020 Scrambler 1000 S and Sportsman XP 1000 S with an industry-first 55-inch wide stance and the most rear suspension travel seen on a 4×4 quad. We picked out the TOP 5 improvements of the Scrambler 1000 S over previous versions to pinpoint exactly what will make this machine shred the trails harder than you ever could before on a 4×4 ATV. 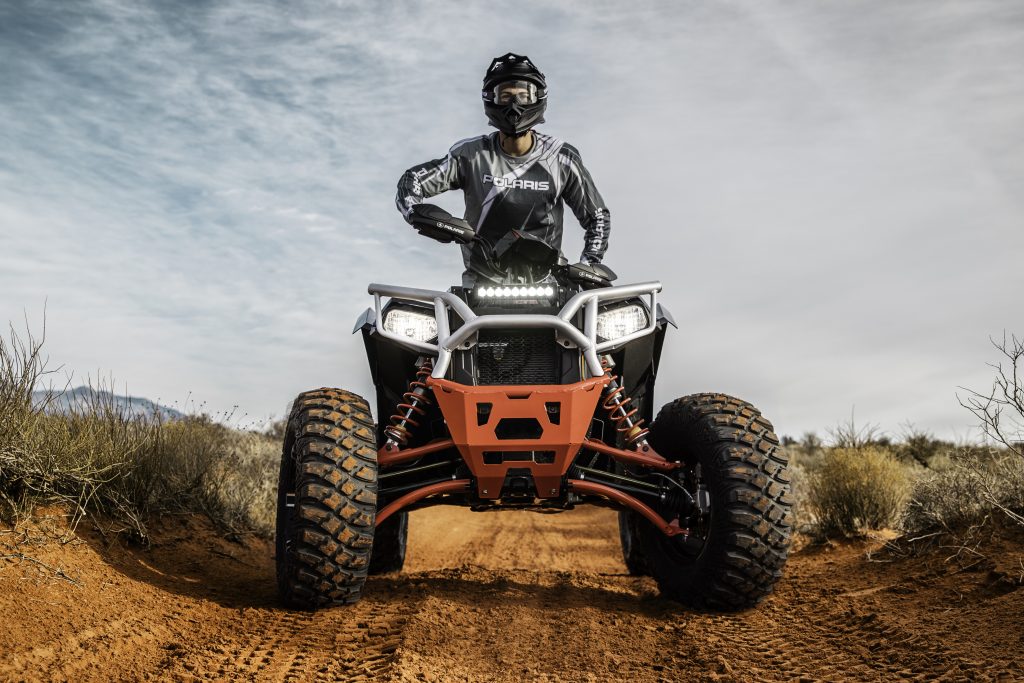 Polaris took the already impressive and smooth ride of the Scrambler line and redesigned the suspension to offer a much wider stance. A Scrambler 850 comes with a 48.6-inch width, measured from the outside tire edge to the opposite outside tire edge.

That means that Polaris added a touch over three inches to each side of the Scrambler in width. We don’t have wheel off-set numbers, but we do know that the new S version runs bigger tires than the previous models, which could all account for more width.

Most of the increase comes in the form of longer high-clearance Dual A-arms in the front and rear suspension. More stability will send you railing into corners and tackling off cambers with ease! 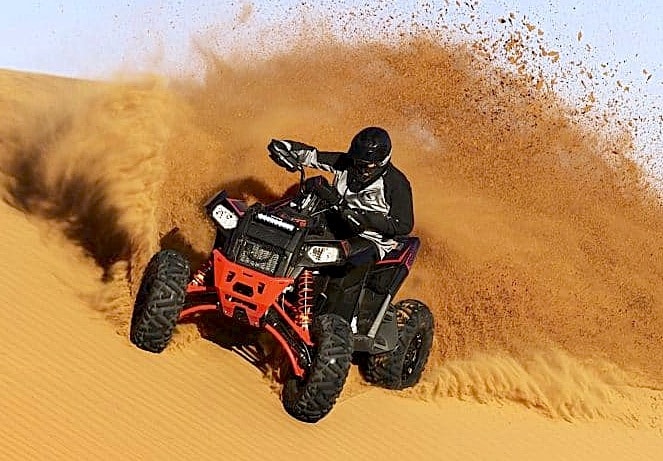 Generally, when A-arms are lengthened and a machine is widened, you gain increases in suspension travel. The previous Scrambler 1000 has a boastful 9-inches of front wheel travel and 10.25 inches out of the IRS.

We enjoyed how supple the Scrambler 1000 was while running FOX adjustable shocks.  The S blows the travel numbers out of the water for 2020, and utilizes dual compression and rebound adjustable Walker Evans shocks.

The front suspension sports 12.5 inches of travel, while the rear employs an impressive 14 inches of travel! This machine should tackle the terrain in a much smoother fashion than ever before which lets you pick up the pace and ride a lot faster. We are just hoping that the racing series will open up a class to let this beast eat dirt and beat its competition. 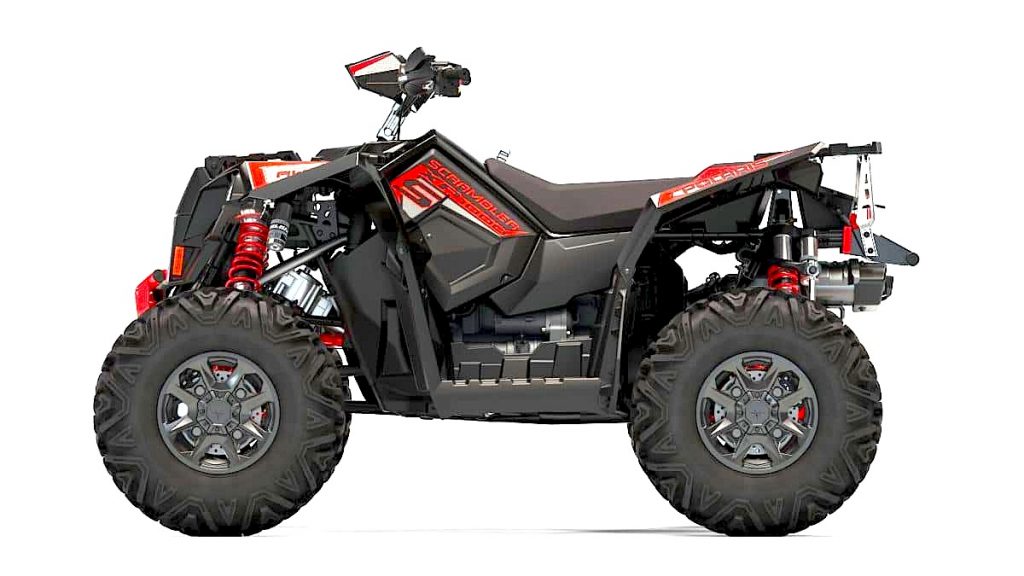 Polaris outfitted their Scrambler line with CST tires for the past few years. We have logged a couple of hundred miles on them, and aren’t disappointed with their performance but we would have liked a different tread profile.

The new Scrambler S gets a set of Duro Powergrip II tires that are an inch bigger than the CST’s at 27-inches tall and look to have the profile we desired. A wider stance allows for a taller tire, while still retaining stability. Another added benefit is that the Scrambler will roll over obstacles easier, and the ground clearance won’t be hindered with its increased width.

All four tires are the same size as well, so keeping a spare in your tow rig is easier instead of having to carry one for the front and another for the rear. 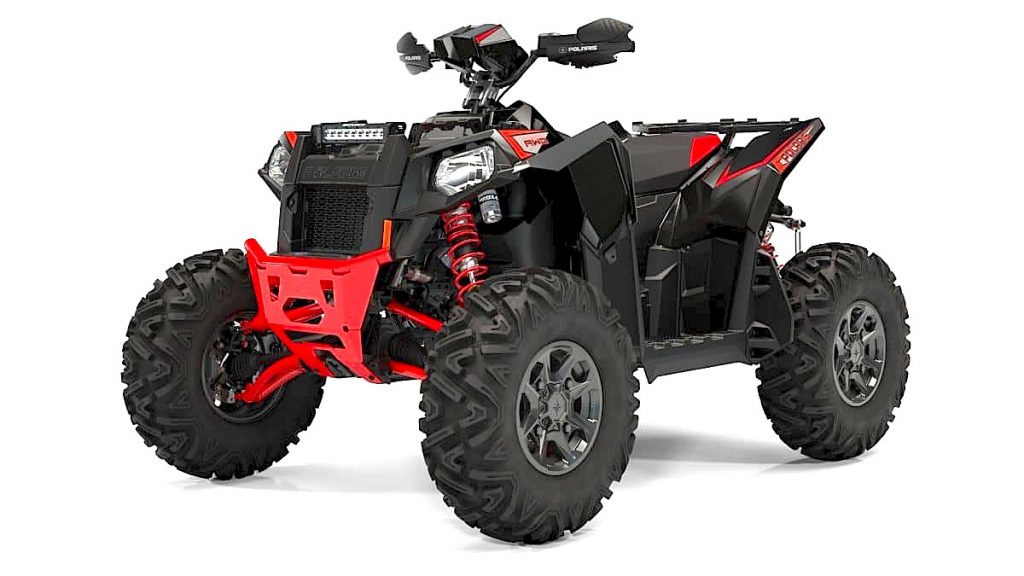 Polaris redesigned the frame and made it bigger, and stronger than before. The main frame is a claimed 31% larger to tackle the added forces and abuse that the heavier and wider suspension will send to it from the trail.

They also beefed up the drivetrain on the Scrambler 1000 S. The front differential was taken from the RZR XP 1000 line, along with the half-shafts to increase its strength by a claimed 15%. They continued the trend with the transmission. They did this by increasing its component strength so you can put the hurt on the ATV without having to worry about demolishing the trans. You will want to utilize all 89 ponies from the ProStar twin-cylinder engine! 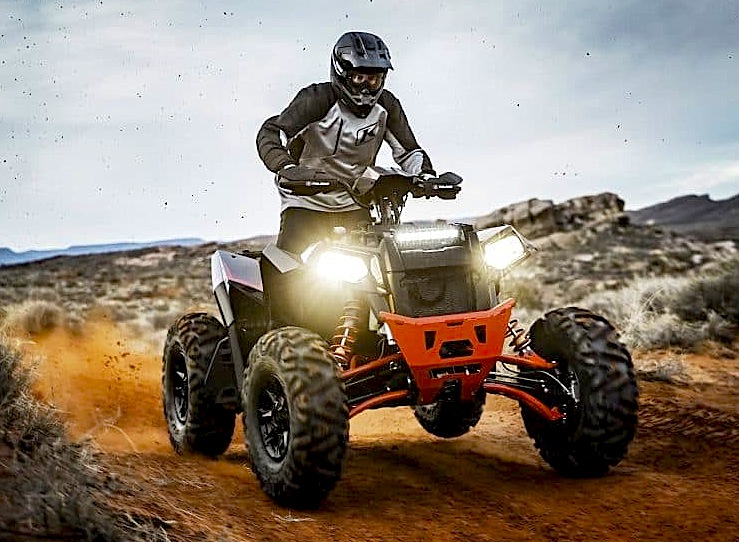 There is so much more to this machine, and we are excited to pick one up and shred our most rugged and demanding trails on it. Polaris decided to mess with the fuel-injection mapping for the Scrambler 1000 S and gave it two power modes! Previous model years never had this option.

You can unleash all 89-horsepower with aggressive torque and sports performance, or dial it back a bit to smoothly traverse slow-speed sections. Add a newly tuned EPS system, ProArmor lightbar, adjustable handlebar riser and you get an epic new ATV from Polaris! The price is steep at $14,999, but if you want one of the baddest quads around, it will be worth it! www.polaris.com

THE NEW JANUARY ISSUE IS HERE!