To our surprise, when Polaris introduced the RZR 570 in 2011, it was actually more fun than the original RZR 800. Chassis and body refinements, along with an all-new DOHC, fourvalve, single-cylinder engine and better clutching, made it a blast to drive. Furthermore, the machine was priced incredibly low at $9999. Since that time, the price has only jumped $300, making this machine still one of the best values you can find. With all the money you can save buying a RZR 570, there’s no better use of those funds than doing a little customizing. That’s exactly what Ryan O’Hara, the national sales manager at Trinity Racing and Streamline Brakes, did with his machine. 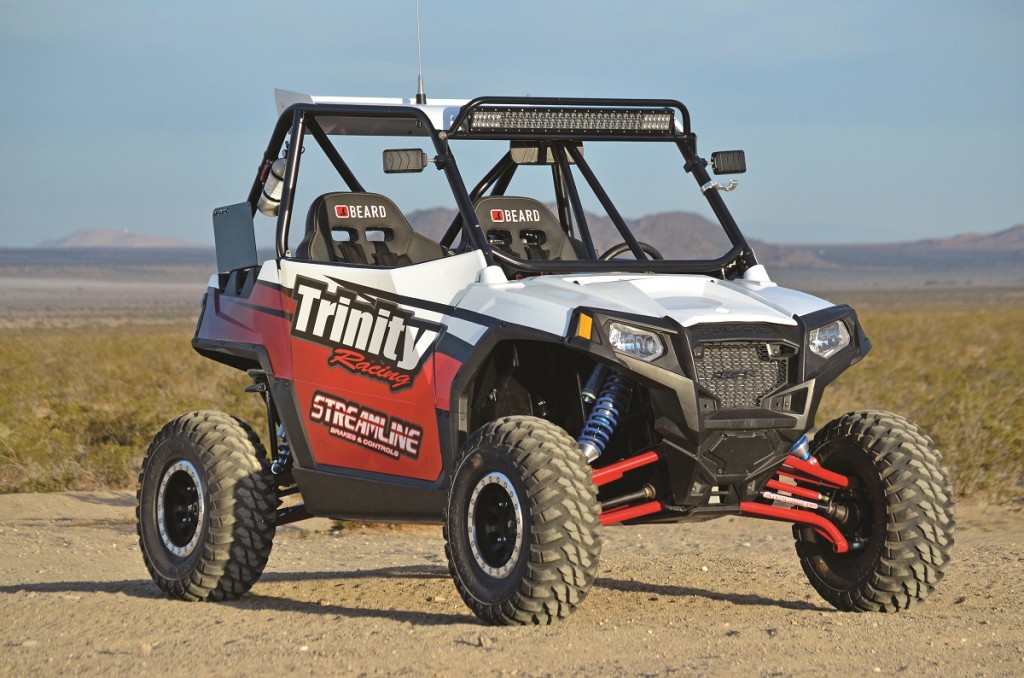 RZR 570 BUILD
We have only seen a couple 570s built up as much as this beast, and they were both racing in WORCS. Ryan plans on doing the same with this car when it’s totally completed. Before the machine made it to the track, we went along on one of Ryan’s test sessions to see how much performance you could actually get out of a little RZR 570. Along with the performance engine and suspension mods Ryan made, enhancements in strength and safety were just as important. 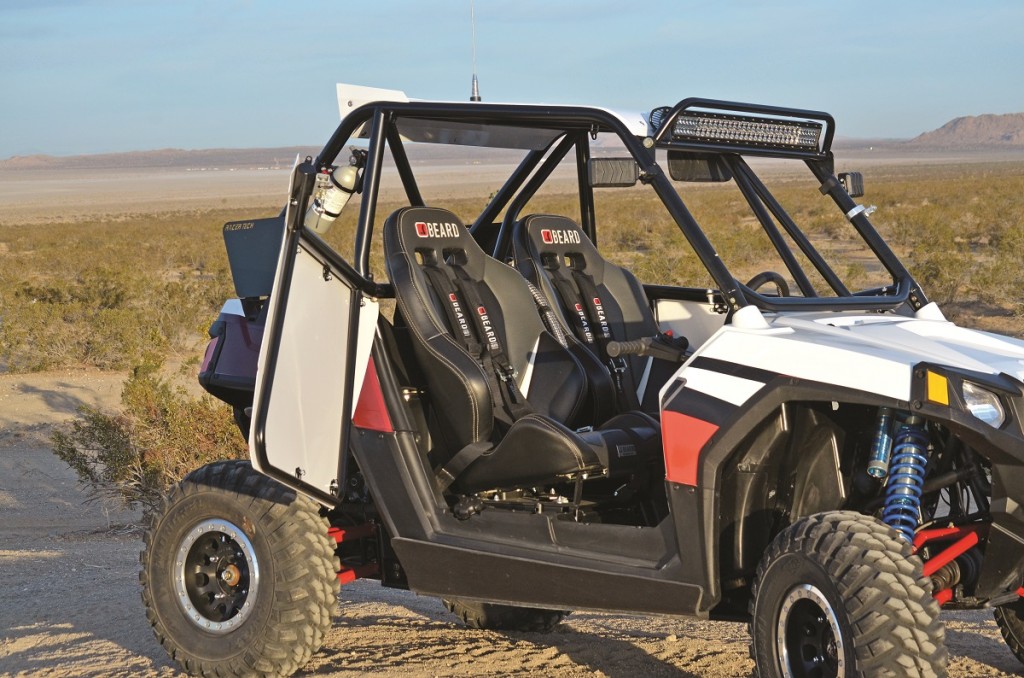 SAFETY FIRST
Like most UTV owners out here on the West Coast where we get to drive full throttle and hit top speeds, a roll cage is a smart investment. For this build, Magnum Offroad was commissioned to build full coverage with rear downtubes, intrusion bars and doors. Yes, the side panels you see are actually working doors called Ghost doors. They give the car a nice racy look while still being functional. On the downside, they are probably the least easiest door to get in and out of that we have tried. However, on the positive side, the door has better side protection than any functioning door we have used. The cage and doors sell for $3200. Inside the cockpit, a pair of Beard racing seats at $399 each outfitted with Beard five-point harnesses ($130 each) were mounted to the RZR using $129 RZR XP 1000 aluminum seat bases from UTV Inc. What many people soon find out after installing heavy aftermarket racing seats is that the stock plastic seat bases crack from the extra leverage.

The final safety feature attached to this build is the SxS Performance fire extinguisher and quick-release mount. Not shown on the car are two SFI-approved wind nets from PRP, which are required by most race organizations. 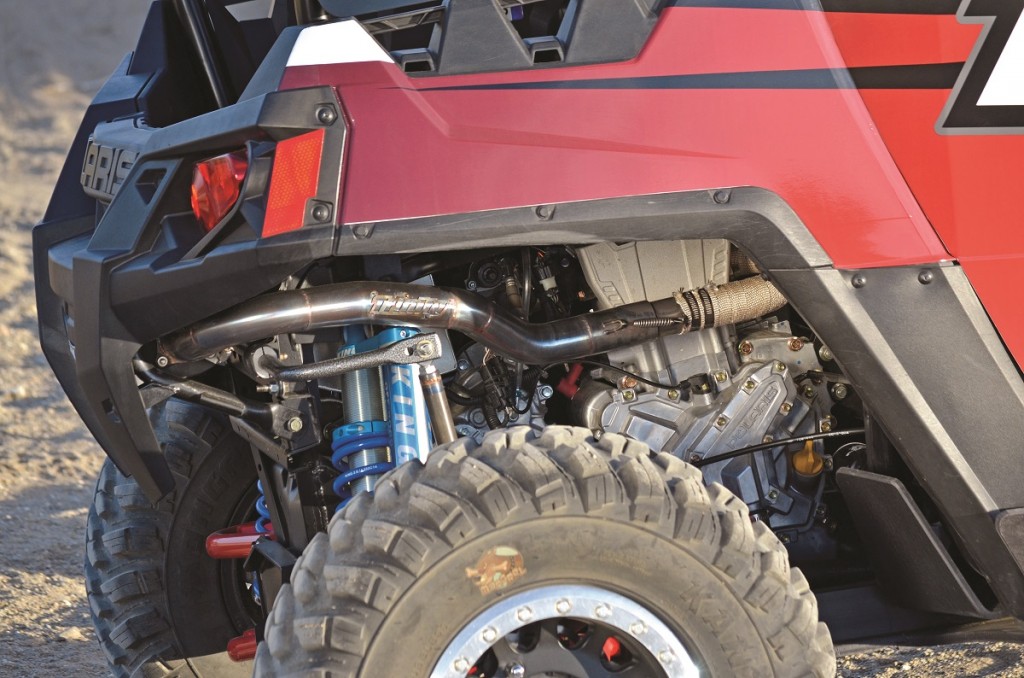 TRINITY/STREAMLINE
The company Trinity recently traded hands and was purchased by the guy who owns Streamline Brakes. Trinity is no longer the house of ATV horsepower like it has been for the last two decades. Trinity has now “streamlined” their product catalog and is only offering aftermarket exhaust systems and a few RZR and Arctic Cat Wild Cat big-bore kits under the Trinity name. They still have ATV exhausts and are now introducing a growing line of UTV exhaust systems as well. On this 570, a complete Stage 5 full system was utilized costing $550. However, to get the most out of any exhaust system on today’s fuel-injected engines, you have to pair it with a fuel controller as well. In this case, a $399 Power Commander with the auto-tune feature ($280) and a cool Power Commander LCD digital display system ($250) for the dash. Ryan didn’t give us any horsepower data, but for an investment of nearly $1500, we hope it’s a lot. To direct air into the intake system, he had a custom $125 aluminum airbox made to accept a reusable K&N filter. Furthermore, to get any power improvements to the ground, the CVT clutch system has to be modified as well. To do this, Ryan used a $50 EPI spring kit, a $250 secondary from Team, a Team Helix ($80) and adjustable Team Rooster weights for another $250. The list of Streamline products was like a page out of their catalog. The company now makes front and rear Wave rotor kits ($89 each), sintered brake pads ($29 each) and brake lines ($90 each) for the front and rear. They carry brake components for most UTV’s sold today. 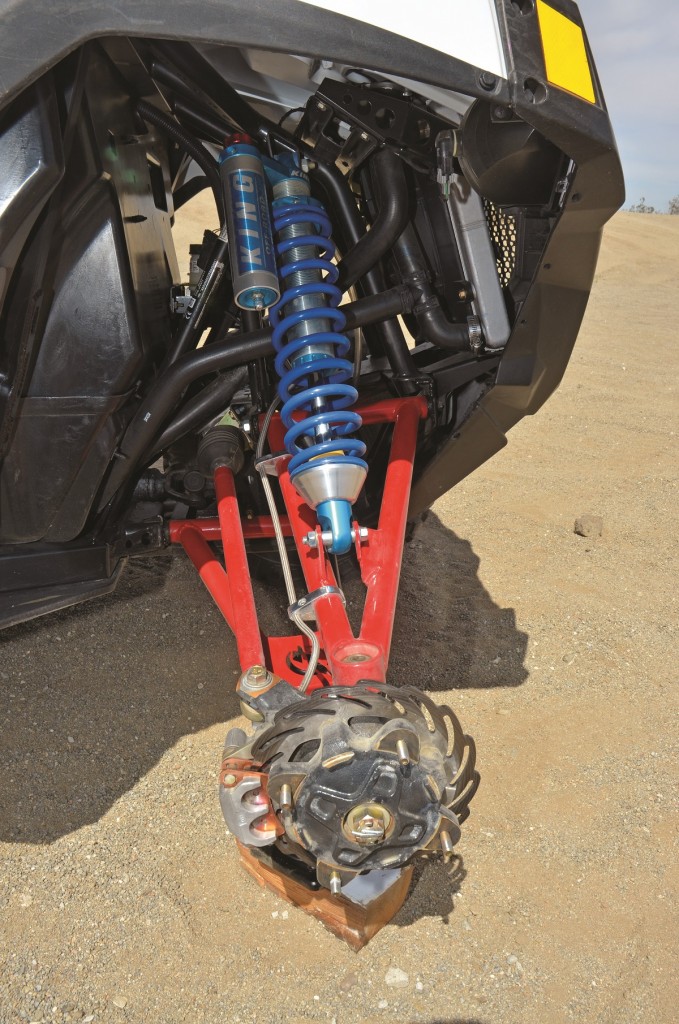 SUSPENSION
A huge investment in suspension was made to get this RZR race-ready. The stock suspension is great for casual trail exploration, but since it comes stock at only 50 inches wide, suspension travel is limited and would make for a rough ride in a race. Ryan relied on Racer Tech for a complete suspension package and a ton of chassis braces to complete the build. Before a single suspension component was bolted on, braces and gussets were installed, including a rear-shock cross brace ($90), rear A-arm brace ($145), a rear A-arm gusset plate ($90), a front lower-chassis brace ($50), and A-pillar cage mounts ($175). It looks as though Race Tech has figured out every part of this chassis that could fail and has a fix for it. They even have a $70 bronze bushing kit for the throttle and brake pedal, as well as the shifter. Speaking of brakes, the Wave rotor kit worked perfectly. We didn’t race the RZR, but we are confident with how hard we drove it. The brakes would stop on a dime and not fade during even a long desert event. 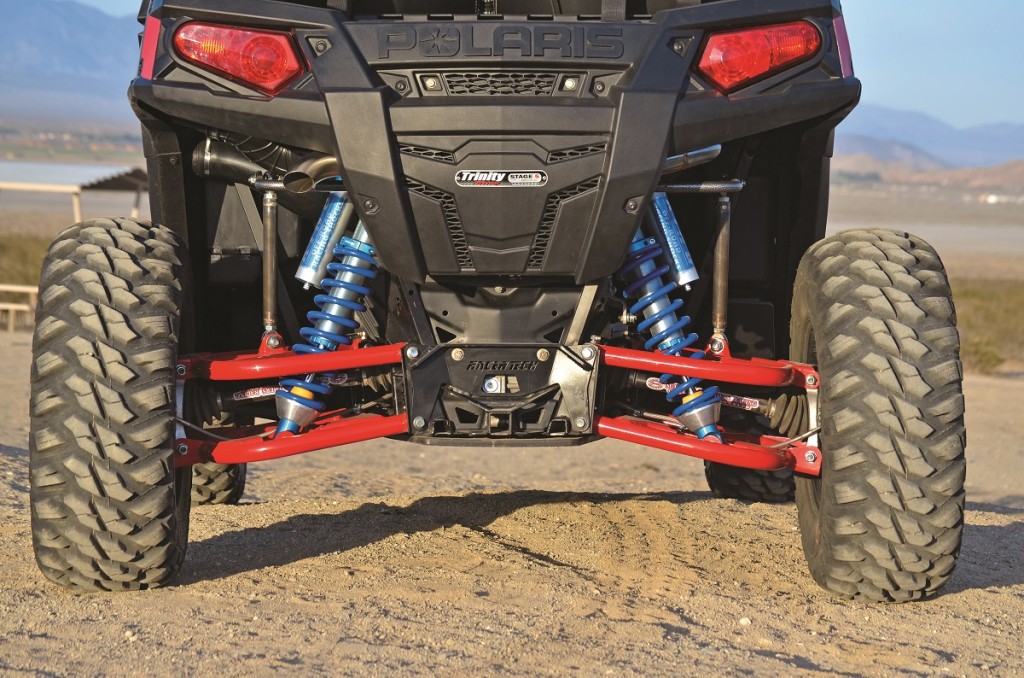 Now, for the suspension, for $2600, Racer Tech has developed a long-travel kit for the 570. That price includes all eight A-arms, longer Summer Bros. axles and heavy-duty extended tie-rods. For shocks, Ryan went with King 2.0 compression-adjustable coil-overs for an additional $2000 for all four. This suspension package increases wheel travel to 13 inches on all four corners all the way up from 9 inches stock. For a little extra control, Ryan added a Cognito rear sway bar, along with some custom Streamline chromoly sway bar links. The front stock sway bar was removed. 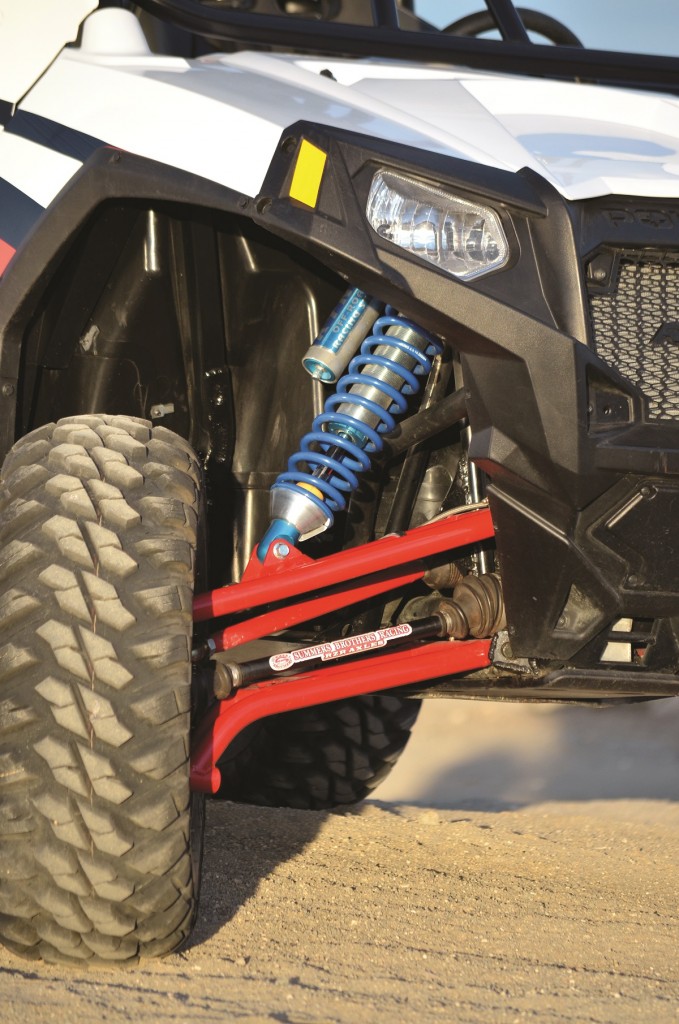 TIRES, WHEELS & EXTRAS
For traction, this car was outfitted with 26×10-12 GBC Mongrels on all four corners wrapped around Method 401 beadlock wheels. We have experience with larger-sized Mongrels before, and their traction has proved very predictable in a good way. Each item averages about $185 apiece. Under the car, we found a full-length, 1/2-inch-thick, $469 Factory UTV skid plate, along with a pair of equally thick $150 Factory UTV rock sliders and their $70 fuel-tank guard. It looks as though this car will be set up for trail riding as well. Further proof of that is supplied by looking at the PCI fresh air system and PCI’s $1200 VHF race radio and intercom. Assault Industries finishes up the parts list with a $324 quick-release steering wheel with a push-to-talk button for the comms and a three rear-view mirror set for another $300. 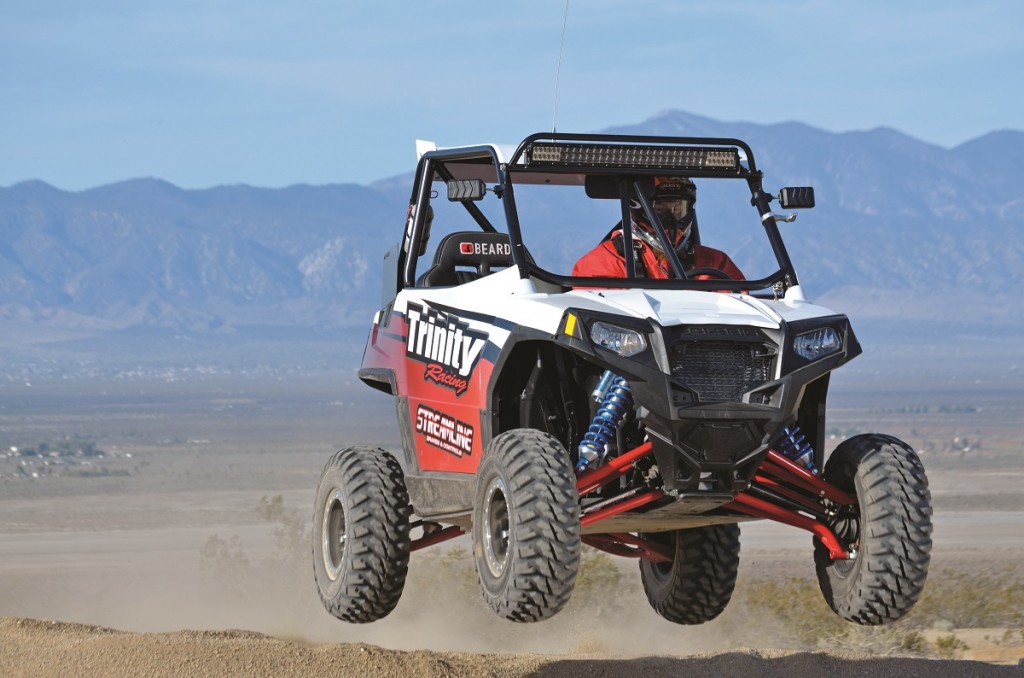 WORTH THE INVESTMENT
With this kind of investment in a car, we guess it’s better to start off with a $10,000 version than one costing $20,000. It’s easy to build up as your budget permits and, of course, only install the parts you think you need. However, most of these components are necessary to be competitive in the growing 570 classes. Our test drive was a blast. Like the first time we climbed behind the wheel of a RZR 570, we were very impressed. This thing is a runner. It’s not head-jerking fast, but the increases in horsepower are matched well to how much power to the ground you typically lose by installing long travel. This little car was able to squirt from corner to corner and is very controllable along the way. You never felt like you were giving it too much throttle, nor did you push hard searching for more. The clutch was tuned pretty mellow and wasn’t jerky starting out, nor did it ever feel like it was topping out. 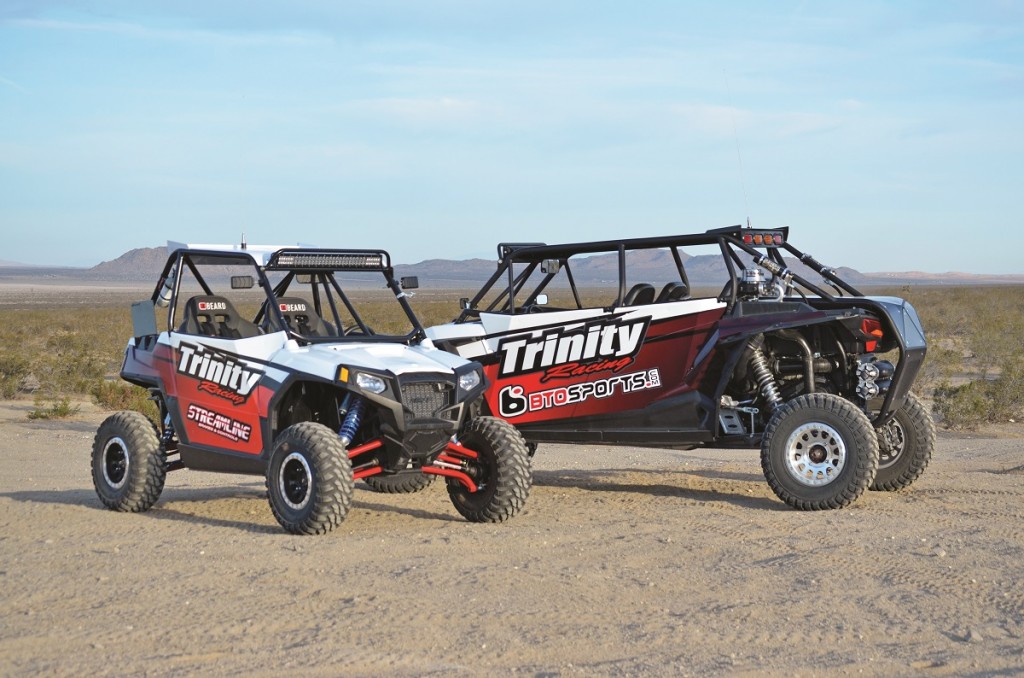 The Trinity exhaust had a nice racy tone that wasn’t overly annoying. The guys at Trinity/Streamline did a great job showcasing what the little 570s are capable of. Will it be winner? To do so, it might have to go on a slight diet by removing the thick skid plates, light bar, passenger seat and fresh system, and possibly employing a big-bore kit, because you know the competition will do the same. But for a fun trail machine that can also be taken to the track and safely raced, we liked it, and that’s the type of machine we like to invest money in. If you feel the same way, give Trinity Racing a call at (909) 987-4213 or visit them online at www.trinityracing .com. Tell them Dirt Wheels sent ya.