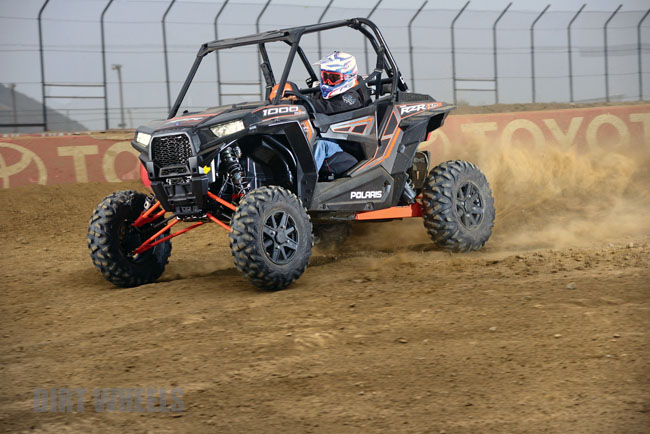 What could be better than a 107-horsepower RZR 1000? How about a 140-horsepower RZR? In truth, that’s only the beginning. It’s possible to push the new RZR to 150, 170, 200 horsepower and higher with the turn of a knob. The concept of turbocharging isn’t new, with a history going back over 100 years. But the coming of the UTV as a popular vehicle has opened new doors. If ever there was a vehicle that cried out for turbo, it’s the modern collection of RZRs, Mavericks, Wildcats, etc.

GASES FOR THE MASSES It’s hard to hold a turbo-equipped XP 1000 wide open for more than a second or two. You have to have a lot of space in front of you.

We know you know what a turbo is. But to explain why turbos and UTVs go so well together, you have to look at the basic premise. The modern turbocharger is dedicated to correcting a fundamental flaw in the laws of physics, as it pertains to the internal combustion engine. Air is all wrong. We’re forced to use it to convey fuel into a motor because it’s all we have, but air and almost all gases have a long list of problems. Chief among those is the fact that it’s springy and does not occupy a consistent, uniform volume. A gallon of air might or might not fit into a gallon of space, depending on atmospheric pressure, temperature and about a billion other things. It’s a ridiculous variable that drives engineers crazy. We use it to our advantage on the compression stroke of the motor to provide a more condensed fuel charge before the ignition, but it works against us on the intake stroke. What can be compressed can also be decompressed, which is what happens when the piston goes down and [stretches] incoming gases to something less than atmospheric pressure. When the intake valves have to shut, a 1000cc motor will have considerably less than 1000cc of charge locked in its cylinders.

So what if you could push the charge into the engine rather than pull it in? You would get your full 1000cc and then some. That’s the idea behind superchargers and turbochargers. The difference between the two is that superchargers steal power from the engine to run a compressor positioned at the intake, and a turbocharger uses the otherwise wasted exhaust pressure to do the same thing. Trinity Racing sells turbo kits with everything you need for a 40 percent horsepower increase. And, you don’t have to stop there. With more displacement, rods and pistons, you can push a RZR past 200 horsepower.

Turbos were never of much interest to the ATV world for several reasons. We simply haven’t had the space. You need a turbo fan in the exhaust connected to a turbine in the intake, and those two locations are traditionally on the opposite sides of the motor. Then there’s another problem with air. Its molecules have an unfortunate tendency to get excited when they are crowded, much like teenage girls at a One Direction concert. When air molecules get excited, they heat up, which heats up everything nearby and steals engine efficiency. In order to combat this, you need to cool the compressed charge before it enters the motor with an intercooler. That requires more space yet. On an ATV, space is precious. An XP 1000 makes for an easy turbo application. You don’t have to cut the bed or airbox, and the only external giveaway is the intercooler.

That’s not true with a UTV. While space is still limited, UTVs have engine compartments that are situated far enough from the operator that heat isn’t a danger, and plenty of space for intercoolers, turbines and mounting hardware. And of all the sport UTVs we’ve seen so far, the Polaris RZR is the most turbo friendly. It has more room around the intake, and that means you can go turbo with fewer modifications than ever. A Trinity Stage IV exhaust with billet construction is part of the package.

We got to see firsthand how well the RZR and turbocharging get along with a Trinity RZR XP 1000. Trinity is a company that’s always been a little horsepower crazy. We’ve seen the company make Banshees produce well over 100 horsepower. With turbo kits, Trinity is now breaking through to a whole new level. The turbines themselves are key components that require precision engineering. At this time, the market is full of Asian-made turbos that are of completely unknown quality. Rather than go that route, Trinity decided to source its fans in the U.S. from Garrett/Honeywell Corporation, which is the leading maker of turbines in the aerospace and automotive world.

In its basic configuration, a Trinity turbo kit is set up for a conservative 10 pounds of boost. That’s determined by the Wastegate, a regulation device made by Turbosmart. The same turbine can produce much more boost, but the rest of the motor might not be able to take it. Ten pounds is worth about 40 percent more power, and the stock parts can handle it. The Trinity kit also has an intercooler, a Stage IV exhaust system, a new intake and filter, EPI clutch parts, new head gasket and all the mounting hardware. Garrett/Honeywell is one of the leading turbine manufacturers in the world. Asian-made turbos are becoming more common, but it’s difficult to tell a well-made one from riffraff.

If you want more, you can have it. You can go up to 20 pounds of boost if you replace the rods and pistons. The next stage after that would be to combine the turbo with more displacement. Trinity has a big-bore kit that pushes the displacement to 1100cc. If you’re up to date on your RZR tech knowledge, you probably know that the stroke is the biggest difference between the 900 and the 1000. That might lead you to the conclusion that the 900’s big-bore kit (ending up at 1000cc) will bolt right on to the 1000 for another 100cc boost. Unfortunately, that’s not the case. The 1000’s cylinders are all new with different cooling jackets, so Trinity had to design all-new cylinders. Put it all together and you have a 200-horsepower RZR!

We got together with Harry from Trinity to experience a turbo RZR in a fairly conservative form. It had the kit with 10 pounds of boost but no other engine modifications. Even in its mildest form, the Turbo Trinity RZR was a white-knuckle ride that left us grinning and shaking at the same time. The power comes on hard and fast, and it eats up space in a hurry. If you leave your foot in it, the terrain in front of you becomes the terrain behind you very quickly. That makes it difficult to open the throttle for anything longer than a short punch—a full second can be a very long time in turbo years.

A common criticism with turbos in general is that they take time to spool up. That results in “turbo lag,” which is another name for a lack of low-rpm torque. With a continuously variable transmission, turbo lag is almost nonexistent, as long as the clutch is configured to engage at the right rpm. That’s yet another reason that UTVs are a perfect application for turbocharging. The RZR’s transmission is easily modified to engage at slightly higher rpm, bypassing that whole lag zone. The end result is big power from the very first crack of the throttle. Going fast in the Trinity XP 1000 comes easily once you get over the initial shock of all that power. You can contact Trinity at (877) FASTOYS.

A basic turbo kit sells for around $4800. That’s a bundle compared to prices that we’re used to seeing for ATV and Rhino hop-up parts. But, the RZR world is different. It’s almost impossible to get out the door of a dealership without spending $20,000. Most dealers load them up with at least $5000 of cosmetic accessories that don’t make a bit of difference. A turbo kit, on the other hand, is money that makes a difference. And, it’s a difference that will make you smile every time you step on the throttle.