The truth is, both machines have a far greater performance envelope than rocks and extreme trails. We know, we’ve had both on a wide range of trails and in sand washes and even dune areas. There are a number of good reasons to have a non-turbo sport UTV with great suspension, but modest (by contemporary turbo standards) yet controllable power delivery.

Both companies have a different take on what is required for serious trail fun, but that makes the UTV world interesting. Standard equipment levels, though, are very similar. There is a small price difference of $600, but given the trim levels, the retail prices are reasonable. 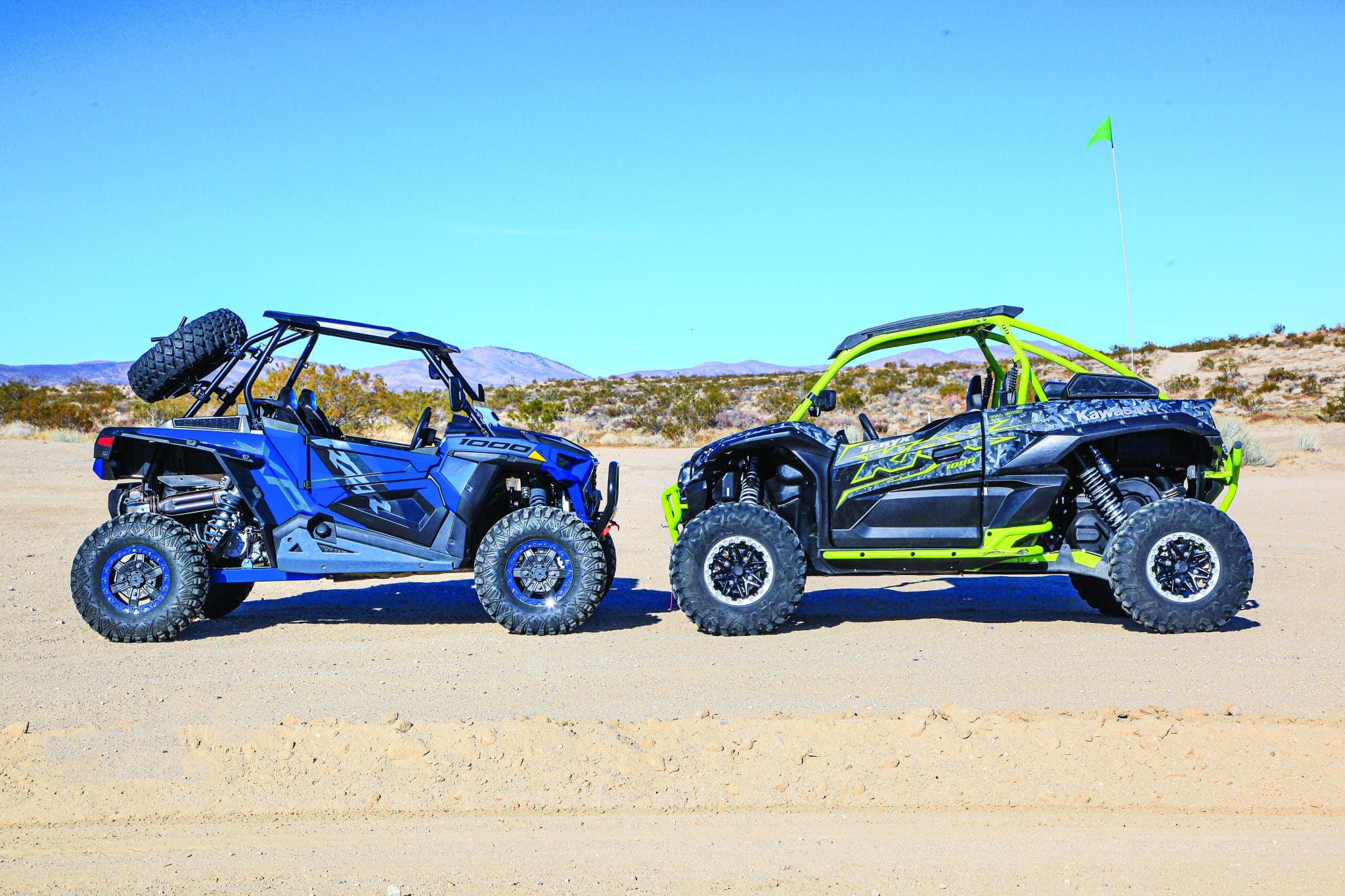 The Kawasaki is 68 inches wide while the Polaris is 64 inches. Clearly, the Kawasaki feels more planted with the wider track, but we found many situations where the narrower RZR was an advantage that allowed more line choices. The Kawasaki has nearly 9 inches more wheelbase. That has a pronounced effect on the handling, suspension and obstacle breakover. Again, what works better for you is a personal choice. In our western open terrain, the KRX long wheelbase is rarely a handicap, but the RZR works great as well.

It isn’t solely down to chassis build or size, but one other physical characteristic that affects a variety of performance categories is weight. We concede that the Kawasaki is built strong and tough, but it weighs 450 pounds more than the Polaris. Polaris claims 110 horsepower for the RZR 1000, but judging by power-to-weight ratio (14.3 pounds per horsepower for the Polaris), the Kawasaki would need to make 141 ponies to have the same power-to-weight ratio. 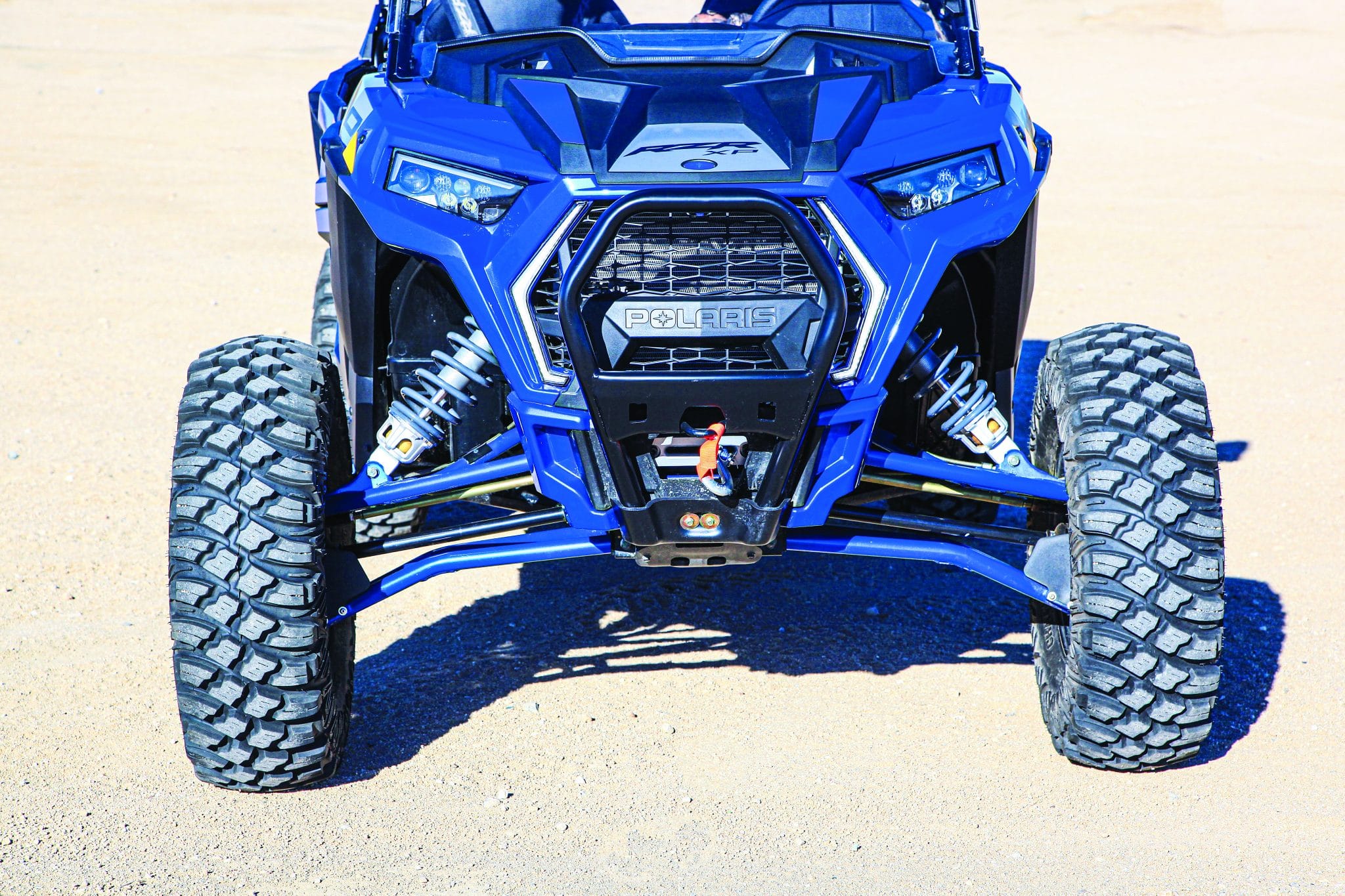 Both are 999cc parallel twins with two throttle bodies and four valves per cylinder. When it comes to the transmission and clutching, there are further differences. The RZR uses a traditional CVT. Its operation is controlled by primary and secondary sheaves that open and close with rpm and load. They allow the machine to take off and provide a drive ratio that varies with load and rpm. This system has proven reliable, and XP 1000 belts will last with reasonable care. The clutching “engagement” is well-calibrated to the power output and 30-inch tires. The power response is immediate and well-mannered no matter what the rpm or vehicle speed. 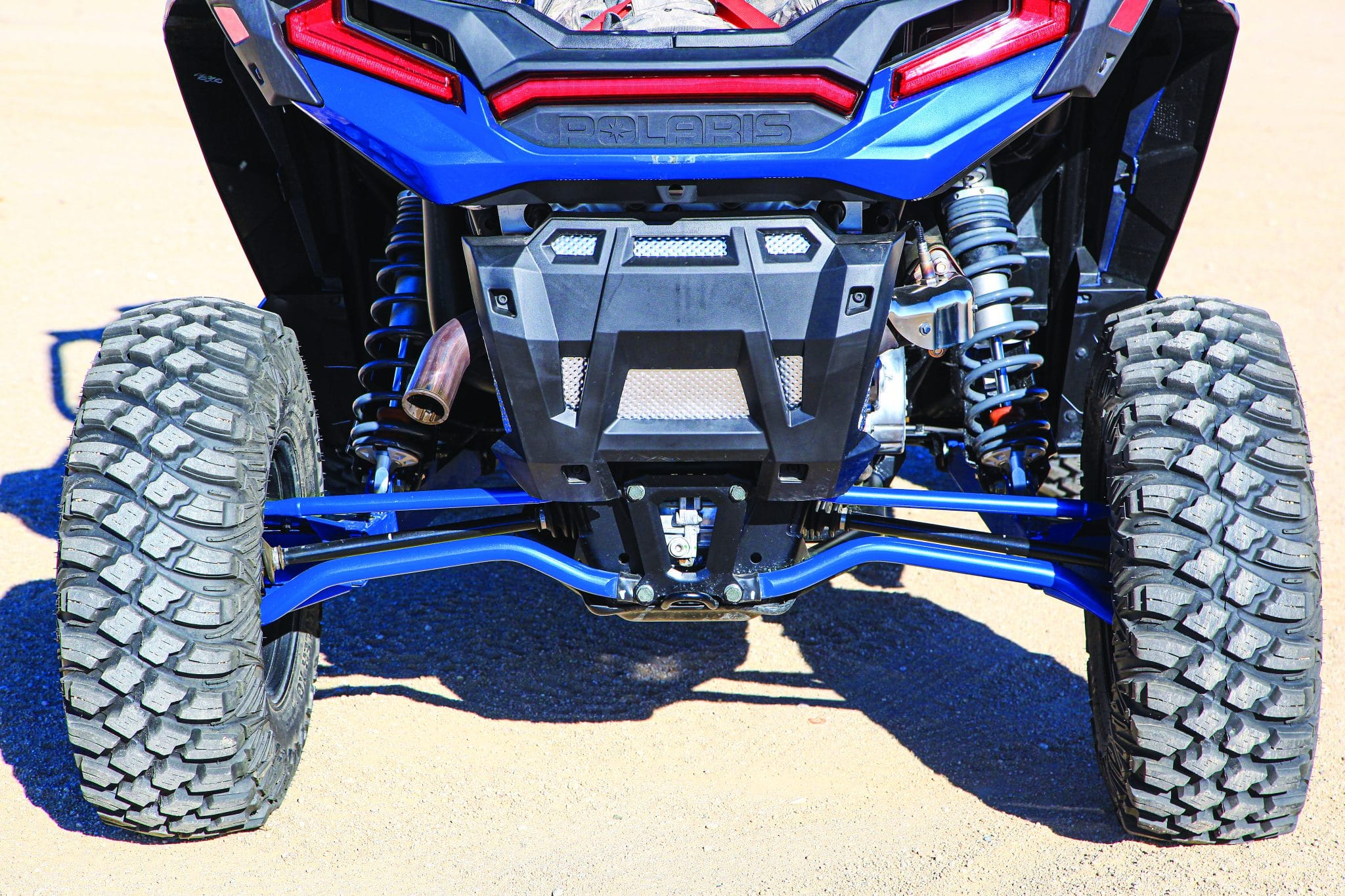 AND NOW, THE KRX

Kawasaki’s engine is a new design for the company, and all of the internal parts appear beefy. Like the RZR, the engine has plenty of effective power for the intended tasks of these cars. In a drag race between the two, the RZR will win every time. There are two reasons. First, there is that significant weight difference. Second is power delivery. Kawasaki doesn’t use the sheaves squeezing in on the belt to get moving. The CVT is always engaged. Kawasaki (and Yamaha currently and Arctic Cat in the past) pairs a centrifugal clutch with the CVT. The centrifugal clutch lets the car take off smoothly without stressing the CVT belt.

The plus side is that belt life is fantastic, but it has a different feel when stopping. In technical traction situations, it is actually fabulous how smoothly it takes off. Engagement is predictable, but there is a tiny lag. There is a slight hesitation when you smash the KRX gas pedal. That could also be the effort required to get the heavier machine moving.

When the gas pedal is mashed at speeds of say 35 mph, the pickup in speed is smooth but not quite the “hit” that the RZR provides. That could be power character engineered in, or the added flywheel effect of the engine spinning the heavier hybrid CVT. As delivered, the KRX hits the electrically limited mph ceiling at roughly 65 mph. Unmodified, it will go no faster. The engine is just the slightest bit “lazier” than the RZR’s, and combined with the transmission’s “lag,” it produces a slightly less aggressive but still very usable power delivery.

Neither of these cars is about top speed, but the RZR is snappy at low rpm, and top speed is near 80 mph. For the engineered purpose these cars are intended for, the smoothness of delivery is vastly more important than the sheer output.

HOW LOW CAN YOU GO?

These two machines both feature a very low-range gear ratio. The Polaris is 55 percent lower than other RZR models! That was shocking in 2017, but other brands have embraced a granny low range. Now the difference between the RZR XP 1000 Trails & Rocks and the Kawasaki KRX (or a Can-Am X3) is not that significant. Both machines find going up or down steep inclines effortless. This is a big advantage in slow technical driving. The KRX goes one step further with a power-limiting selector switch. This mode filters abrupt throttle inputs in low-speed, high-traction situations with reduced power and smoother engine response. This basically eliminates the car hopping, bouncing and digging holes on technical climbs. There is less chance of breaking mechanical components, too.

On steep, loose, dry-soil downhills littered with small rocks, the KRX felt connected to the earth regardless of the ground conditions. With its low-range gears, wider stance and longer wheelbase, it felt like it had Velcro for wheels. We never felt the machine losing connection with the trail. It gives solid feedback to the operator in all trail situations.

On the same hill, the RZR provided different sensations. In low range, the front and rear wheels did not feel as connected to each other or the terrain. The front end seemed to free-wheel, with the rears almost skidding. The clutch will eventually disengage due to low rpm, and it almost free-wheels. Coupled with the shorter wheelbase, it was not dangerous or out of control, but not relaxing.

THE LOOK AND FEEL

Kawasaki’s KRX has large, “normal,” hinge-in-front doors that provide easy access. Climbing in and exiting are effortless. The RZR has hinge-in-back suicide-style doors that are easy to use but require a back-in maneuver versus a slide-in like on the KRX. The seats in both the RZR and KRX are comfortable, and long rides are not a problem. Upright seating, combined with the relatively short noses of these cars, allows the driver optimal “over the-front vision. Descents are not as scary when you can actually see down in front of you.

The RZR, being a bit narrower, also places the seats closer together than the KRX. Some drivers rub arms and shoulders with their passenger during aggressive driving. The KRX gives you more room everywhere, even room behind the seats for soft storage.

The KRX is just plain roomy. The driver’s left-foot resting pads on both are close to the seat due to the wheel well.

The KRX came with automotive-style shoulder/lap belts. While comfortable and easy to fasten, they do not offer the feeling of personal safety you get from the RZR’s factory-equipped multi-point harness with a center-click buckle. 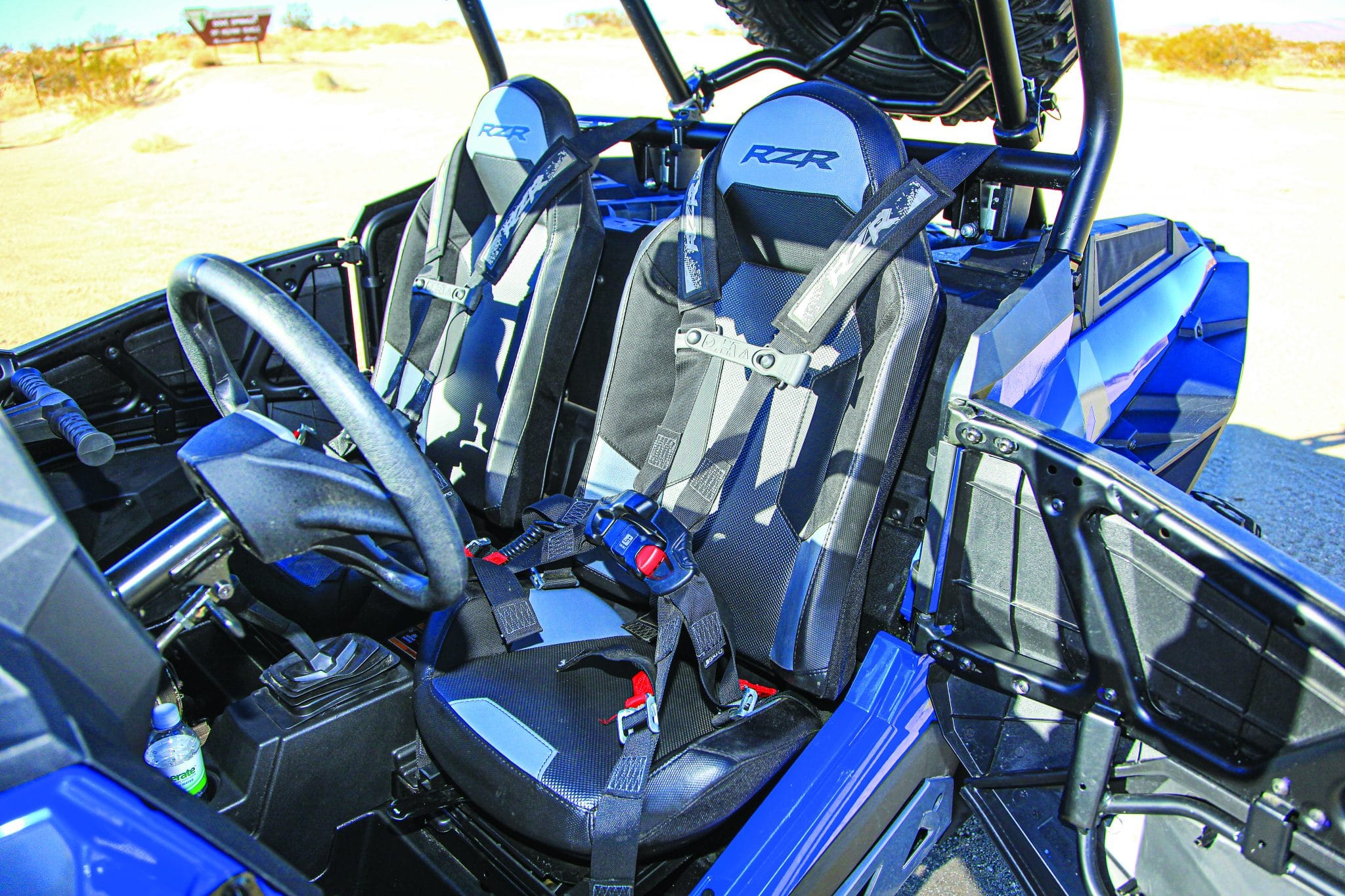 There is a small difference in the power-assisted steering operation. Both provide ample feedback to the driver, but there are more turns, lock to lock, on the KRX than on the RZR. This isn’t bad. In slow, twisty terrain, the subtle, accurate steering is a benefit.

When trails change to hard, rocky uneven paths, the RZR shines. Shock tuning, low weight and no front sway bar free the front suspension to articulate smoothly over rocks and boulders. This, coupled with its shorter wheelbase, lets the RZR navigate through the nastiest terrain with ease. Of the two cars, the RZR’s ride quality through the rock gardens was the most impressive.

Conversely, the RZR is not as stable at speed with the shorter wheelbase and the lack of a sway bar. We have a desert loop worn to two distinctive grooves. Some of them are pretty deep. The KRX took these corners as fast as the operator dared. RZR pilots had to back it down a bit. It gave the sensation that the inside wheels could get light if pressed too hard.

The KRX has firmer-feeling suspension that is not as smooth in the rocks as the RZR. It doesn’t do anything objectionable, and as the speeds increase and the terrain gets rougher, the KRX starts to shine. The harder we pushed the KRX, the better it reacted. When you play in the desert, whoops are inevitable. We could certainly negotiate whoops in the RZR at a pretty good clip, but it demands your attention. With the KRX, blast away! 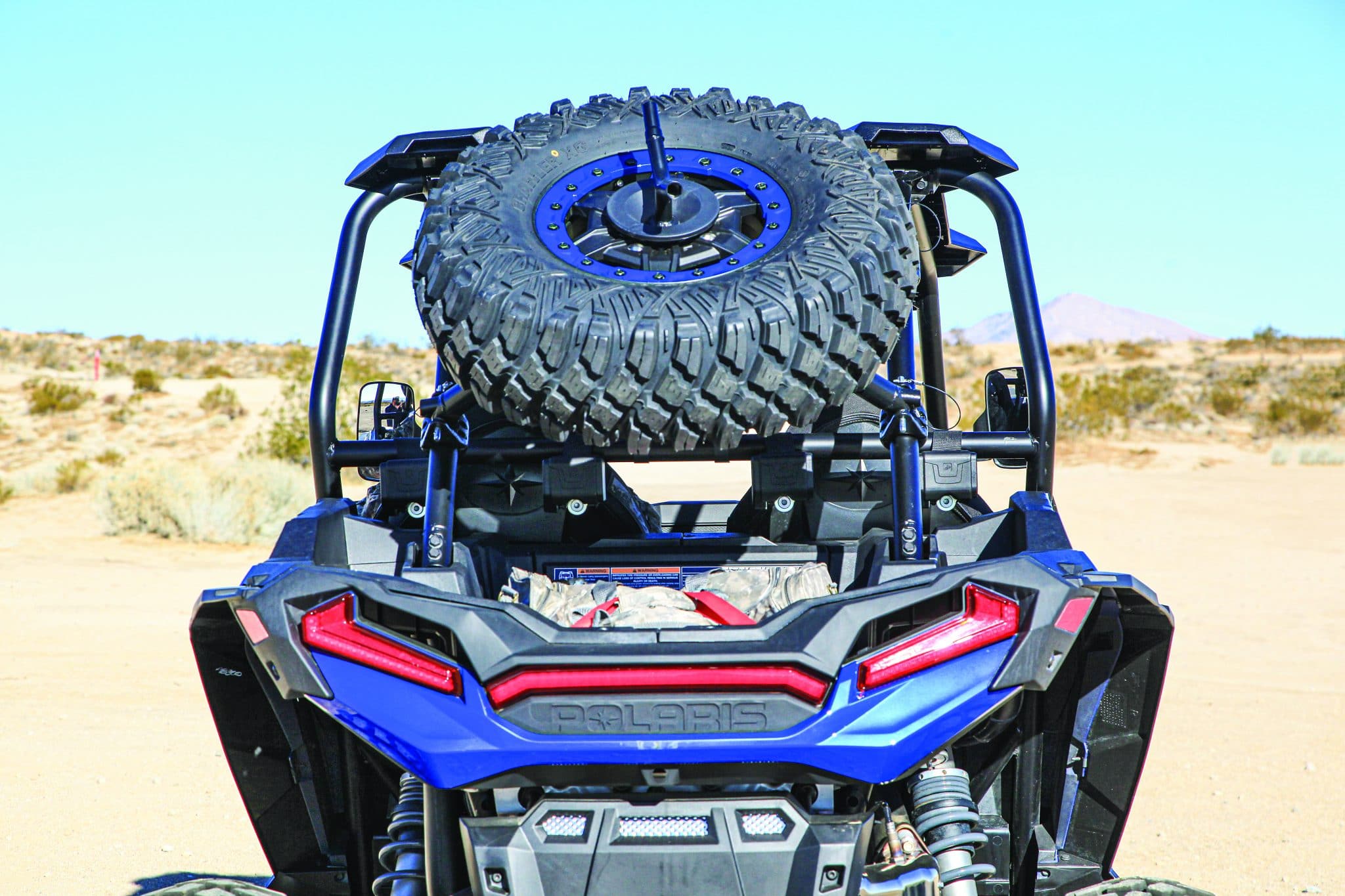 It is impressive how excellent the 4WD system on the RZR works. The front wheels don’t get any power until the rears slip, so steering stays light without torque steer. Polaris has it refined, and it does work great. The Kawasaki has a true front differential lock. For extreme climbs it is an advantage, but like so many decisions in this comparison, your personal riding terrain makes a big difference in which machine is better for your trails. The smaller RZR is easier to park, store and transport. It likewise shines in tight-and narrow-going. Even out west we found times that it had a decided advantage on tight trails. For areas with natural width restrictions, like trees, the advantage would only grow.

For more open terrain the Kawasaki is a very impressive package. Taller riders were most likely to appreciate it with the generous in-cabin room. If you are a taller driver, or if your riding area has whoops between the tight and technical trails, the Kawasaki is a winner. The same is true if there are a lot of ledge drops or climbs where the longer wheelbase is a big help. Fortunately, there are no bad choices here, and even in the west, we’d happily derby either one.

SHOPPING FOR THE BEST DEAL