— Redefining the Ranger By the staff of Dirt Wheels — 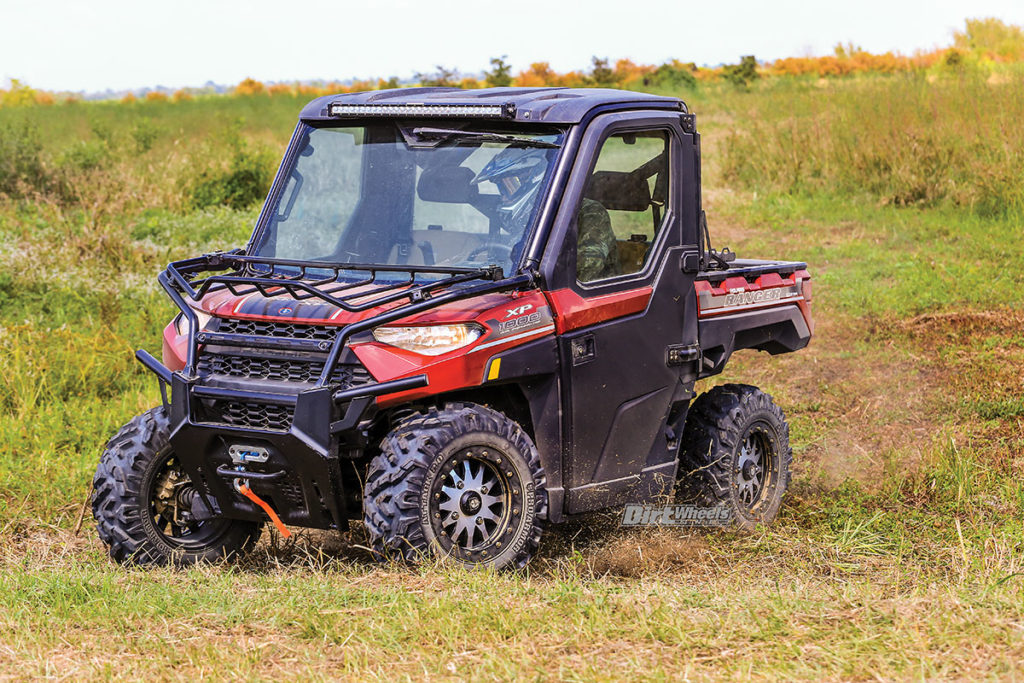 The Polaris Ranger series has been the backbone of utility UTV life. Rangers are responsible for many innovations in the class. Even if you don’t have first-hand experience with Ranger performance, you need only look at the brands that have “borrowed” styling cues from this capable lineup of machines to see how respected they are. Polaris feels the Ranger has become a little less unique as other brands have copied the look of the machine. Despite that thinking, when Polaris upgraded the top-line Ranger to a full 1000 in 2017, it kept the basic chassis and body styling of the 2016 range—and that is even though it was introduced as a new model and not an upgraded XP 900. For 2018 Polaris completely redesigned the Ranger 1000 for the second time in two years with what Polaris claims are 100 owner-inspired upgrades. The upgrades are certainly obvious in the much different stance, interior layout and exterior look of the new 1000.

No doubt the other machines in the Ranger line will eventually get some or all the same features and look, but for 2018, only the three-seat Ranger gets the new style, performance and features. Even the Ranger XP 1000 Crew is a carryover from 2017. The multitude of changes made the Ranger XP 1000 EPS more rugged for work but also more refined, so it is a better companion for play and recreation.

Protection doesn’t end with the skid plate. The front of the machine is guarded by a massive bumper that Polaris claims is the biggest in the industry. It has coverage for the entire lower front of the machine, including the A-arms and steering parts. There is already a winch mount and a bar to attach a snowplow.

The basic design of the suspension returns, but with an inch more travel at 11 inches front and rear. Ground clearance is up to 13 inches thanks to the added suspension travel and the addition of new 27-inch tires, an inch taller than in 2017. While the suspension isn’t radically new, there are steering improvements integrated into the 2018. It has a tighter turning radius thanks to 19-percent-tighter steering. The steering is quicker as well, but it is speed sensitive. We aren’t sure whether to thank the speed-sensitive feature or the new one-piece frame, but the steering felt more solid, and the front of the machine was more predictable.

Having a big parallel twin-cylinder engine means that the Ranger 1000 has no apologies to make about performance. As a result, there was no need for Polaris to change the engine specs for 2018. Performance is up thanks to a clutch ratio Polaris calls the largest in the industry. Polaris took lessons learned with the RZR Turbo to ensure that the belt stays cool with twice the airflow of 2017. The beefy belt is borrowed from the RZR Turbo. Polaris reported no belt issues during testing, so Polaris doubled the time between belt and clutch service intervals despite the fact that the towing capacity is now a class-leading 2500 pounds. At the Ranger introduction there was a double-axle flatbed trailer with a huge, round hay bale on it. The rig must have weighed around 1800 pounds. The Ranger XP 1000 towed it with no discernible strain in either low or high range. With this machine you could literally tow a small camping trailer behind the Ranger when you go hunting or camping. Engine braking is up as well, and it comes in very smoothly.

While changing the air volume to the belt case, Polaris located the air intakes for the CVT and the engine intake to under the hood in front. As a result of that relocation and other changes, the Ranger interior suffers from far less interior sound pollution from the exhaust and intake. Even in the base model that has a fully open cab with door nets, it is easy to talk to the passenger while wearing helmets.

At the introduction of the machine, Polaris had net-door base models, units with doors, some fitted with aftermarket closed cabs and even some NorthStar editions. The NorthStar has a sealed, fully enclosed cab from the factory. It has roll-up door windows and an automotive glass windshield with a wiper and washer. The cab also features forced-air heat and air conditioning! We were in Louisiana a short time after the hurricanes that devastated the South, so we expected mud, but the fabulous Honey Brake hunting lodge near Jonesville had clear, dry days and high temps. And while there was mud, swampy areas, lakes and ponds everywhere, some of the well-traveled dirt tracks had billowing, fine silt dust. We were actually more than happy to spend time in the NorthStar. It is easy to tell the difference between the NorthStar and a Ranger with an accessory closed cab. The Ranger XP 1000 EPS models all use a muffler tucked in on the passenger side under the bed, but the muffler interferes with room the NorthStar needs for the AC compressor, so it has a muffler across the rear of the machine.

There is semi-bench seating for three with seat belts, and the ’18 seats feature another inch of padding. The shifter is dash-mounted, and the twin-sweep gauge package from the General is used in the Ranger. The dash and interior are set up nicely with cup holders designed to accept mugs with a handle. There are two glove boxes on the passenger side, as well as under-seat enclosed storage on the driver’s side and in the middle. The area under the passenger seat is open for storage, and the floor has a molded-in ring suitable for holding a 5-gallon bucket. It is claimed to be an ideal spot for a dog to ride. We used it as the perfect spot for a camera bag.

If you feel the need to personalize the machine with electrical goodies, there are a variety of blank switch locations already waiting on the dash.

HOME ON THE RANGE

One of the major goals with the Ranger was to make it a better companion for recreation while enhancing its ability to work. We’d say that it was a bullseye with the XP 1000 EPS. It is quick and nimble on trails and roads with light steering that feels planted and accurate. The suspension honestly feels like there is more than 11 inches on tap. We were able to push the pace and feel totally comfortable. With independent suspension on all four corners, it soaks up angled roots, logs or ledges without rattling the passengers.

The Ranger is as wide as machines in this class go at 62.5 inches, so stability is fine on cambers, though the NorthStar edition with all its high cab glass is a bit less confident. The standard model is quicker to respond to throttle and steering inputs, and it just has a lighter feel.

The upright seated riding position is comfortable for a rider in excess of 6 feet tall but suited shorter pilots equally well. The new, deeper, softer seat is very accommodating. Even though the ride was littered with soft and hard ruts, roots and logs, we rarely had clearance issues. We were in largely flat, open terrain, so we weren’t severely testing the claim that the turning radius is smaller for 2018, but turning around in the brush and woods was always easy. Since we were on an active hunting ranch, we were able to put the Ranger XP 1000 to work while having fun. We either drove or watched while the Ranger towed boats, transported people and hunting equipment, ferried dogs and even pulled an 8-foot alligator up a steep bank. We are confident that the Ranger can handle the ranch, or the farm or the construction site, equally as well as it tackled hunting chores.

One of the reasons that Polaris introduced the Ranger at a hunting lodge was to show off the many available accessories available to make the new Ranger suit your activities. They made sure that the Ranger can be whatever you want it to be. 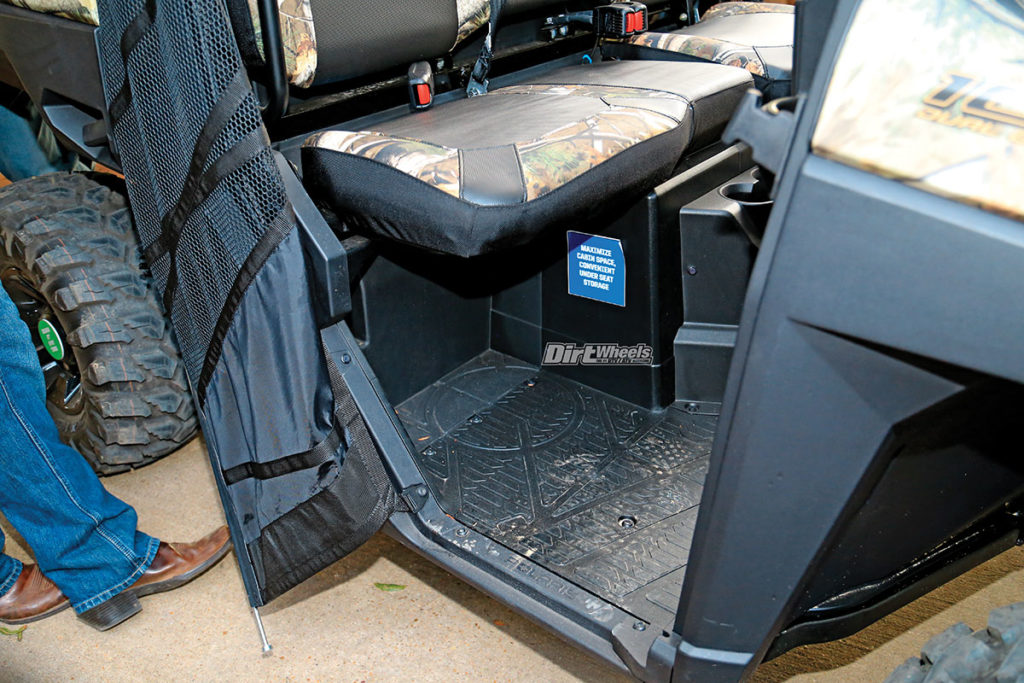 It is easy to see why the Ranger is so strong in this category. It is a solid, effective machine for work and fun. It feels like it was designed to a standard and not to a bottom line. It is powerful and responsive, but the CVT hook-up is super smooth and controllable, and that can be fine-tuned with the three-position dash switch. This is one utility machine that we can get excited about having fun with.