Suspension has been a point of pride for Wildcat X models. When the X was first released, the 18 inches of rear-wheel travel and the 17 inches of front-wheel travel set the bar very high for the competition. Now, with Arctic Cat absorbed by Textron Off Road, comes the Wildcat XX—the first truly new high-performance Wildcat in far too long. While the Wildcat shares some residual DNA from the Wildcat X, the XX is a truly new machine built with a great deal of input from off-road race legend Robby Gordon. Gordon’s experience with machinery that demands service at pits on a racecourse and with hammering across brutal terrain have had a profound impact on the XX. It is made to be easy to work on yet built tough to avoid needing work, if that makes sense.

To begin with, the old Arctic Cat V-twin was a bit long in the tooth to power the XX, so a new 998cc inline triple was selected. Unlike competing brands, Textron chose natural aspiration for this flagship performance model. When we first heard about this choice, we were surprised. Since then we have learned that some of the best-selling sport UTVs are naturally aspirated, and the Wildcat XX claims the highest horsepower of any non-turbo UTV. While the 90ish-horsepower Wildcat X has ample power for most drivers, in the company of other premium sport UTVs, it feels breathless at high rpm. That certainly isn’t the case with the XX and its 125 horsepower. It avoids the bottom-end blues that curse some triples. We give flawless clutching and proper gearing some credit for an engine that is both effective, responsive and potent, and that is with 30-inch tires stock (as large as any stock UTV and on uncommon 15-inch rims).

Full double-wall plastic doors, functional fenders, those 15-inch wheels, 30-inch tires, Fox 2.5 Podium QS3 shocks with bottom-out control, and a race-inspired roll cage with front and rear intrusion bars are all standard. Textron and Robby Gordon claim that it will not be necessary to replace the cage to race the Wildcat XX. Other clues show that Textron has considered the need of racers. The stock seats have cut-outs for five-point harness-type seat belts to run, and the frame tubes behind the seats are already drilled for shoulder-belt mounting.

There is a blank panel in the dash that is sized for an iPad Mini—the standard in aftermarket GPS displays. Naturally, that area could also be used for radios, and the car is ready in more ways. In addition to the standard 12-volt outlet and optional USB port, the Wildcat XX is pre-wired with four independently fused and switched circuits for easy installation of light bars and electrical accessories. This eliminates the need to remove panels and tap into the stock wiring. Textron claims it cuts installation time of electrical accessories in half.

As impressive as the Wildcat suspension has always been, no previous Wildcat can touch the XX in the rough. To begin with, all of the steering and suspension components are double shear, meaning they are supported on two sides instead of one with the bolt passing through two supporting members for increased durability. The steering and suspension system utilize a beefy, forged aluminum front knuckle and large wheel bearings. Large-diameter unequal-length front A-arms connect to the forged knuckle with huge Heim joints. Those Fox shocks are mounted to the lower A-arm to lower the center of gravity.

Thanks to Gordon’s input, the rear trailing-arm suspension (named RG Pro Suspension) employs massive trailing arms welded up from stampings that have a rippled surface for strength. The front of the arm mounts in two locations like some ATV swingarms. Thanks to this design, no radius rods are used, and the right and left arms are interchangeable. According to Gordon and Textron, this combination reduces track-width change by up to 40 percent in the front and 80 percent in the rear compared to the competition. To further add control and reduce bump steer, the XX has a front steering system with the rack and tie-rods in front of the A-arms. 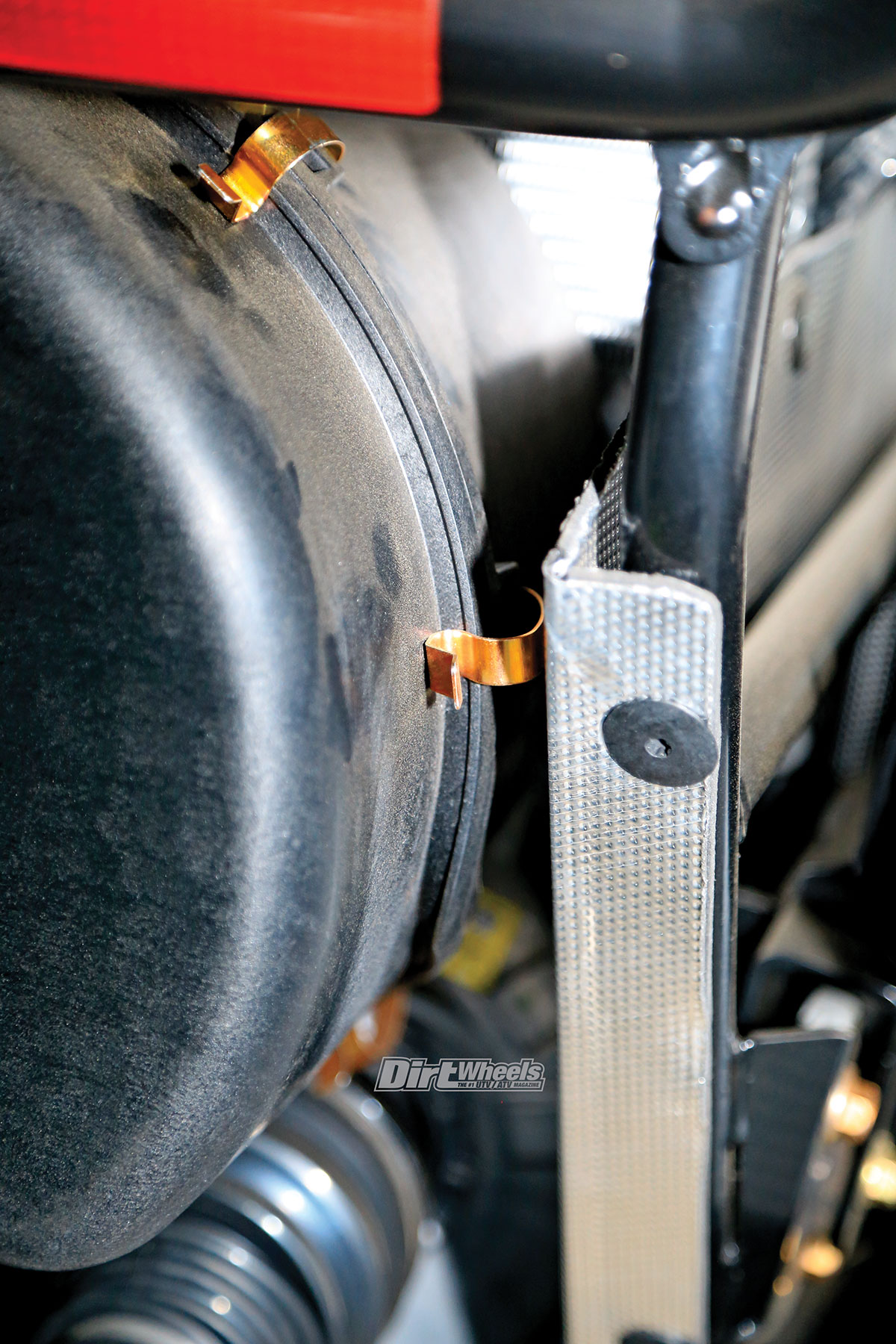 Textron built the Wildcat XX with a “hanging rear drivetrain.” That means all the mounts are on top, so any underside damage will have no effect on the actual powertrain mounts. The engine and rear transaxle can be removed with six bolts. Simply remove the rear skid plate and disconnect the fluid lines and electrical connections. Tool-less connections allow the entire bed cargo box to be removed in seconds to allow access to the top of the engine.

The same is true in the front—the front gear case is mounted to an easily removable front steel clip/skid. The full front skid plate can be removed if it is damaged instead of having to replace the entire frame. 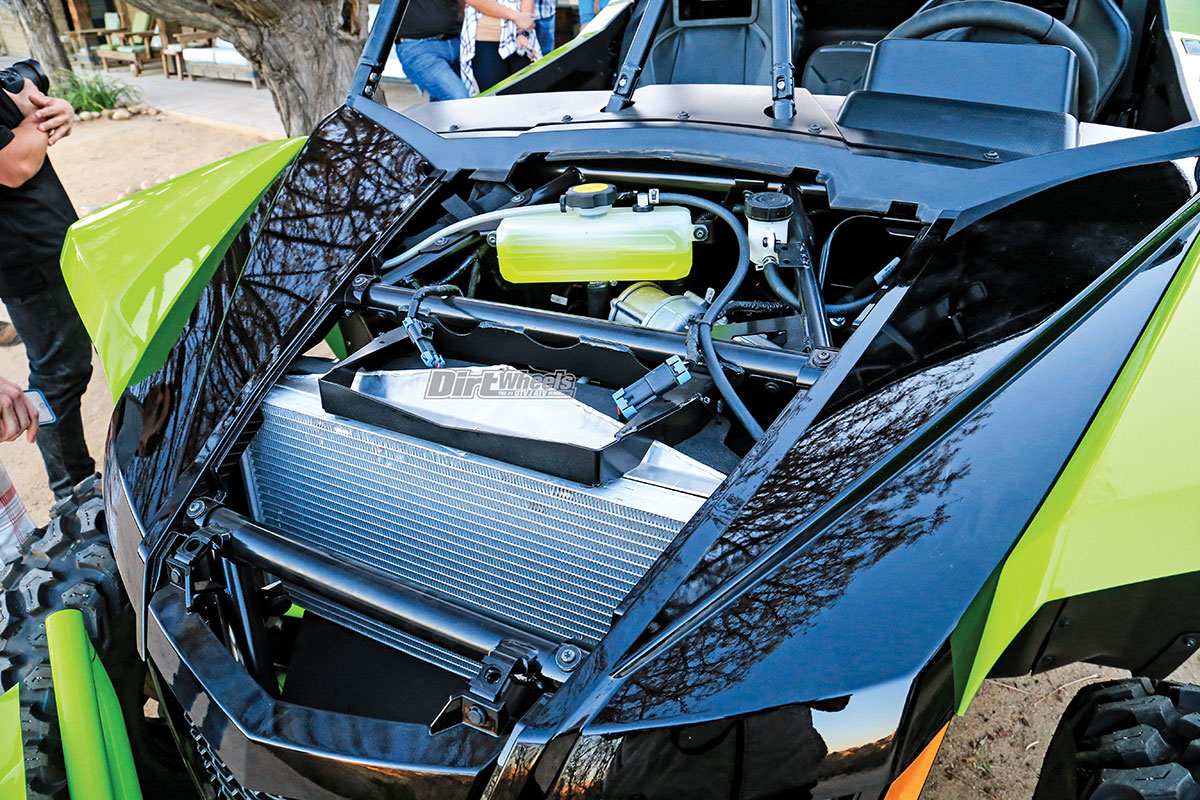 That rear cargo box is rated for 300 pounds of capacity. One of the machines at the XX model intro had a clever spare tire mount in the bed that carried the tire and wheel contained in the bed. It keeps the weight of the spare low and has no effect on the visibility to the rear. Inside the machine is a monster 4-gallon glove box that should come in quite handy. It looks like there is another storage compartment between the bucket-style seats. In a way it is, but it stores the electrical connections and any electrical components that might need attention.

No other sport UTV has a body that is quite like the Wildcat XX. It looks something like a compact, sleek stadium truck, and even the rear bed looks something like a truck bed. The look includes fenders that actually cover the wheels to keep them from throwing terra firma all over. Open the light and tightly fit door, and you will see that you must step over a higher door sill than most cars. Once you are seated, the seats have a leaned-back position. Legroom is ample, and the driver’s seat adjusts fore and aft 6 inches. Textron claims that one of their test engineers was 6-foot-6. Our taller driver definitely appreciated the legroom. 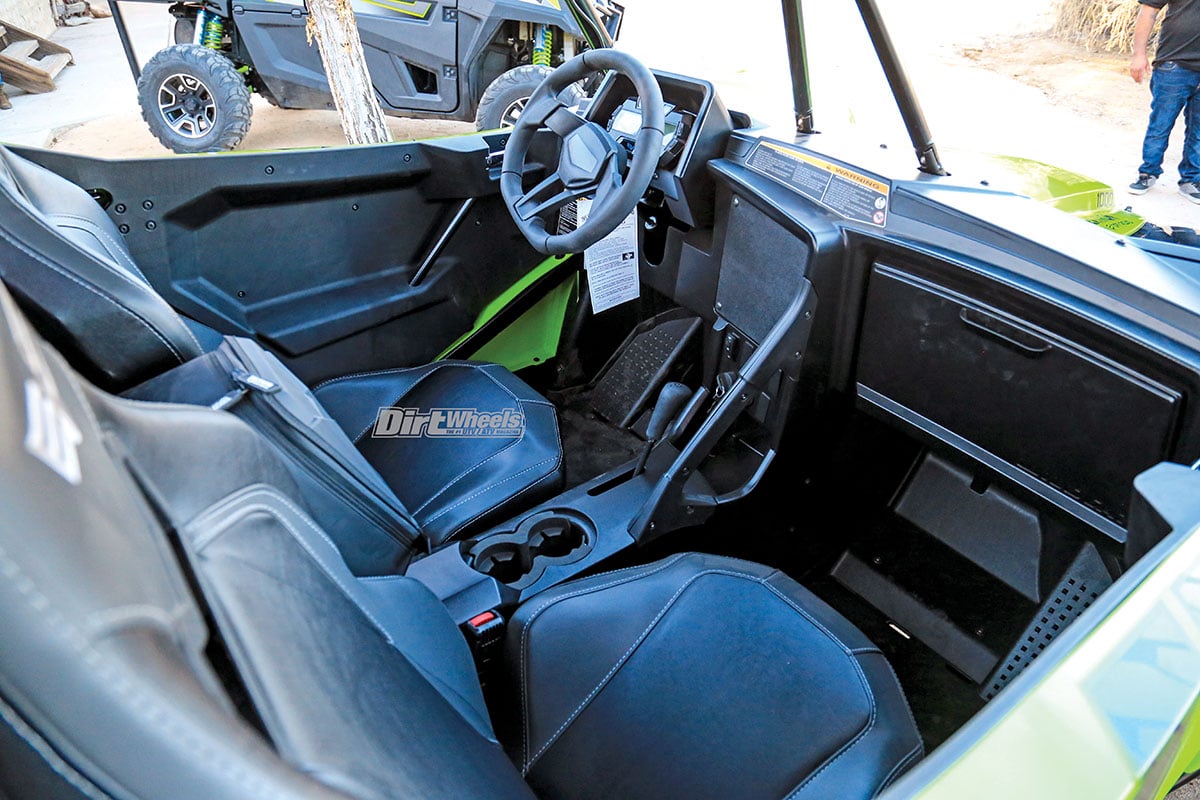 Hit the key and the engine spins for a few seconds before lighting off, but was dead reliable during our testing.

Even though the XX comes with tires that are as tall as any on a stock UTV, the final gearing feels a touch low. We thank the gear ratio, the new Team transaxles, front gear case (designed specifically for the XX) and the Team clutches for the immediate response. The power is smooth and usable but builds rapidly, and it screams; we saw 9000 rpm at times. The top speed is governed at 75 mph, and you can feel the governor cut in. 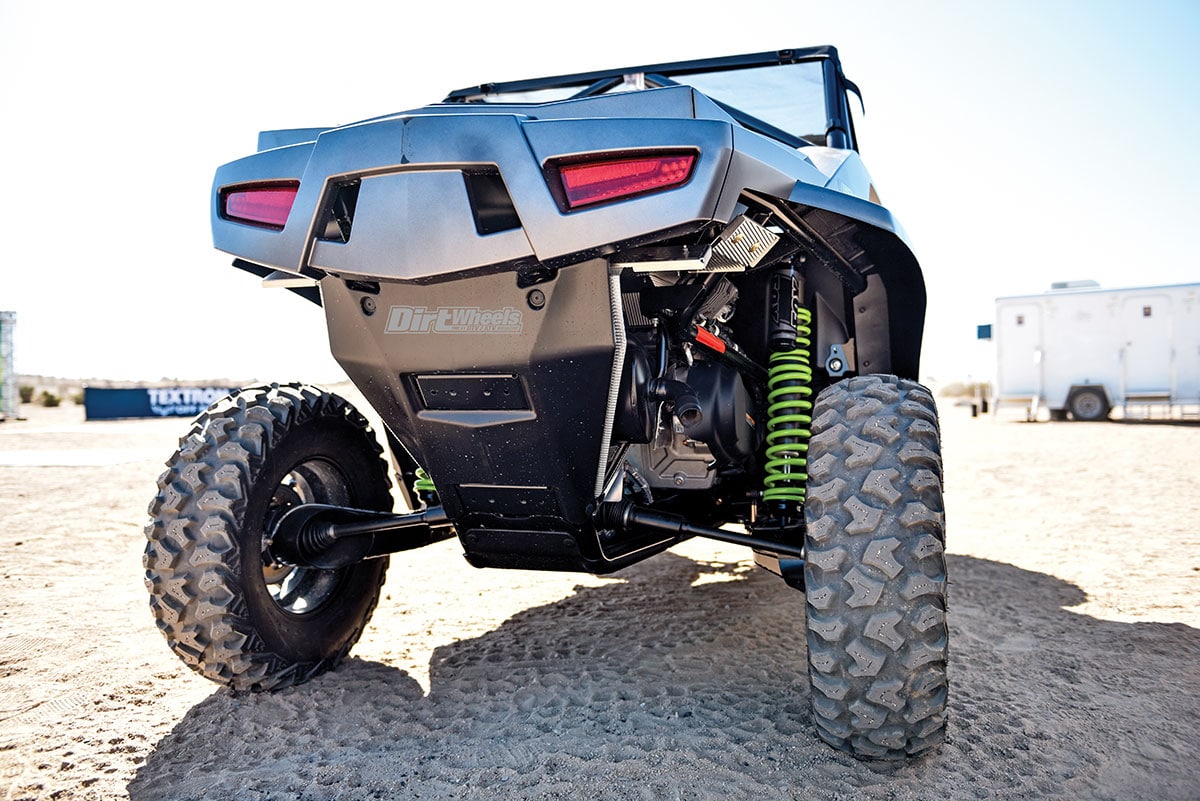 At 18 inches of travel with a 64-inch track width, there are machines that are wider with more travel, but none with the overall suspension excellence of the Wildcat XX suspension. This car is simply ridiculous in the rough. Just mash the throttle through whoops, even if you are turning! Textron was so confident that they supplied a Can-Am Maverick X3 Turbo—the non-intercooled, 120-horsepower, 64-inch-wide model with 20 inches of suspension travel—and a Polaris XP 1000 for all to conduct back-to-back runs through a whoop section. The XX was easily the quickest and most secure feeling in the fast rough. 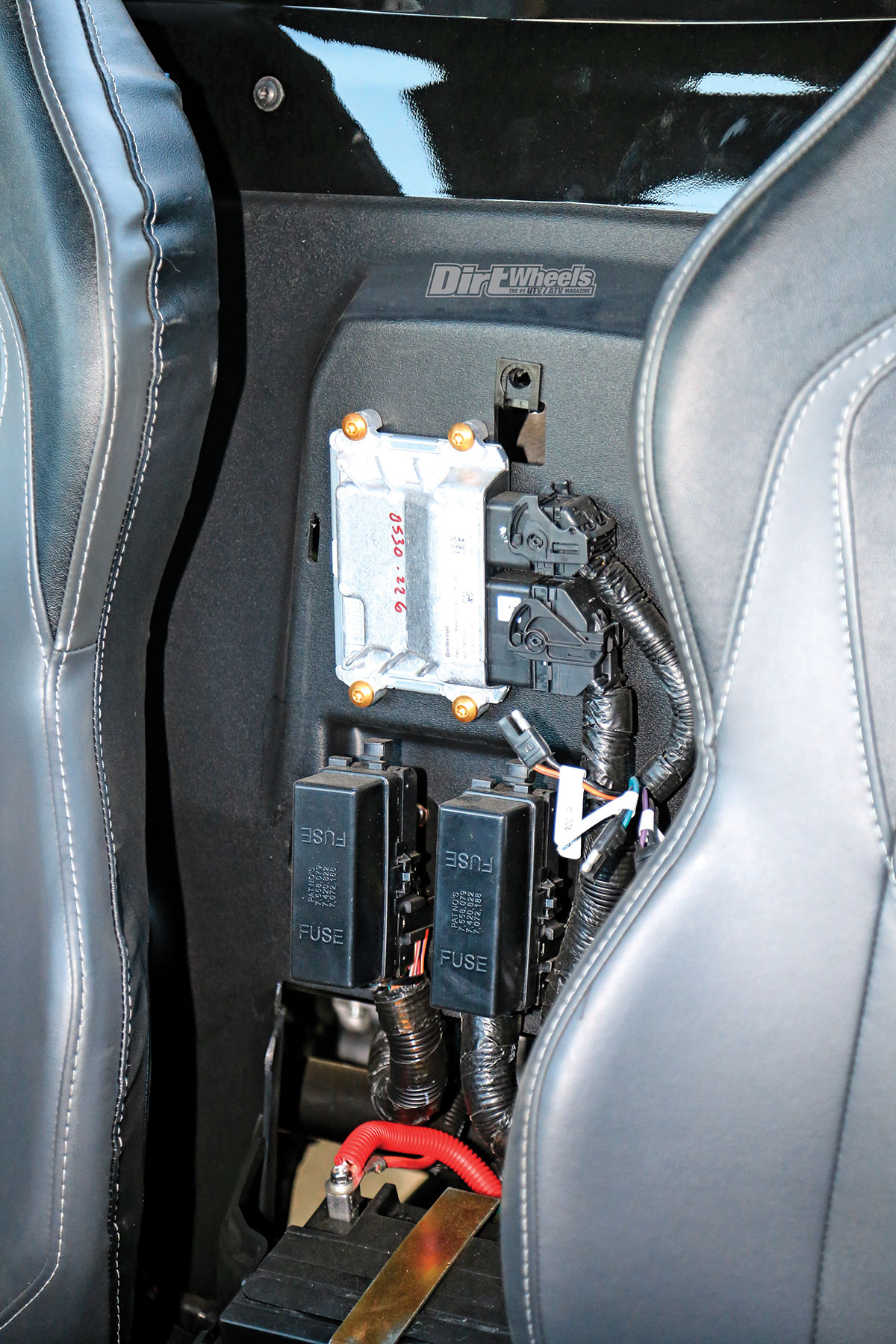 Some sport UTVs that are great in whoops suffer in slower-going, but that wasn’t the case with the XX. Textron led us into some truly nasty rock-busting. The suspension worked as well as anything we have experienced in the rocks. We had a couple of times when we engaged the front differential lock, but we aren’t sure it was necessary.

That full bodywork, which will be so nice in the wet, does restrict your view of wheel placement and to the front in steep and technical driving. Like all high-rpm triples we have experienced, the XX has a few harmonic vibrations, but otherwise, the engine performance is a match for the stellar suspension. It certainly feels like the strongest, normally aspirated UTV we have driven. The heavy-duty nature of the machine means that the XX is heavy compared to machines in the class, but we didn’t feel the weight in a negative way. You can get the inside wheels to lift, but it seems to take a lot to actually tip the machine. We can’t wait for more time in a full-production unit. This is one great UTV that raises the suspension bar.