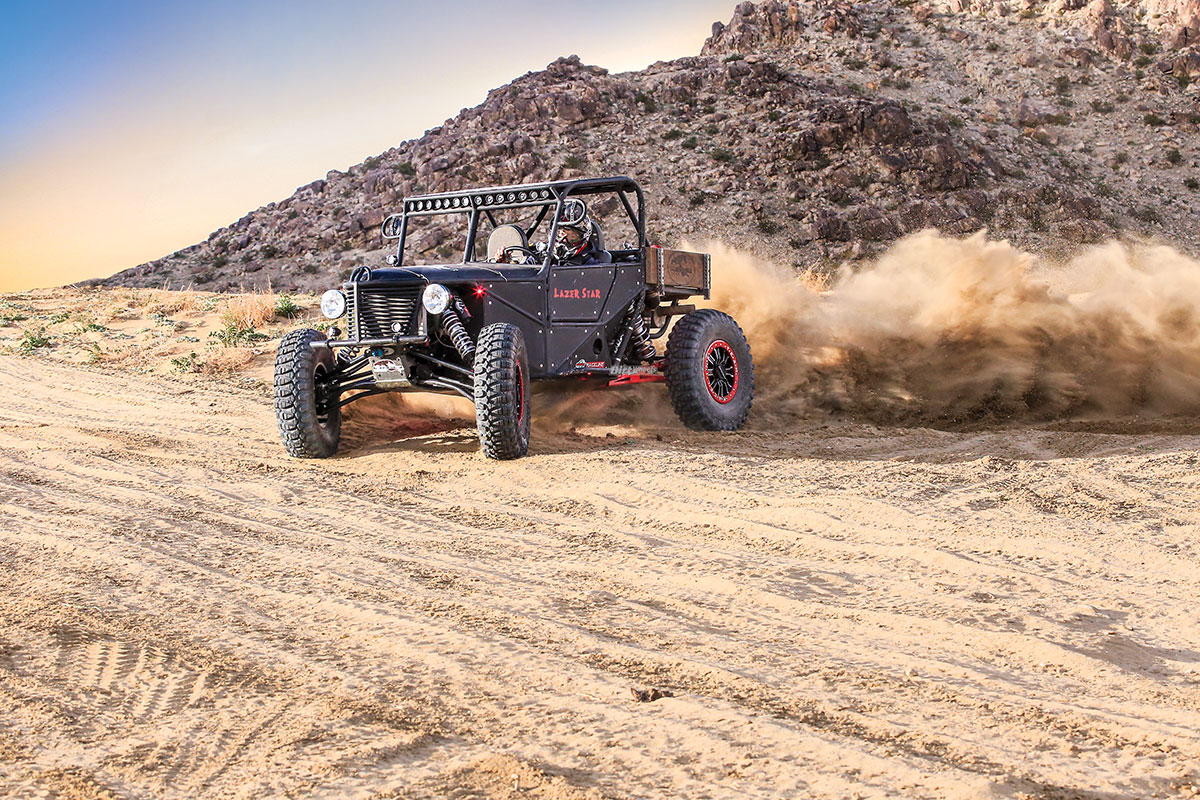 Most of the builds we feature in Dirt Wheels magazine are all about the bling and the speed. This diamond-in-the-rough XP 1000, on the other hand, was chosen because it caught our attention with its unique design and purpose.

Being a mechanical engineer by trade, project owner Jonathan wanted something with style that would withstand his “work hard, play harder” mentality. The inspiration for the “Old-Timer” originally came from a love of classic ’30s-era trucks mixed up with the raw style of King of the Hammers rock bouncers with lots of custom tube work that have the ability to take a beating.

Growing up in Arizona, Jonathan was privy to all aspects of the off-road world. However, while co-driving for his buddy in Class 5 unlimited car, he learned what real speed in the dirt was all about. But race cars showed him just how expensive the sport can get.

The Old-Timer RZR has been in the works since 2014 as a weekend project that snowballed over the years. At the time of purchase, an XP 1000 was the most capable Polaris model on the market, although Jonathan now has his eye on a new Honda Talon.

AN ELEMENT OF STYLE
By 2016 the original body had taken a beating and needed a new look, so he took on the task of designing a custom chassis and body from the skeleton of the RZR. This is a popular method for many racers, so it was easy for Jonathan with the expert fab skills he had on deck.

Once the machine was stripped, a 1.5x .120-wall steel frame was laid out in Solidworks for style and functionality before going into production. His machine had already been on its lid twice, so the improved cage and body would ensure the occupants remain protected in almost any situation.

To keep the vintage hot rod look, a stock 1937 Ford hood was fitted to the new custom tube work. Interior style was brought to life with grey tweed PRP seats and more custom fab work in the form of a welded chain shift lever. Jonathan also made custom wood bedsides for his machine with the logo for major project sponsor Lazer Star, which was burned on for the show season.

They lit up this build with what seemed like their entire new line of lighting options, which is only fitting since they used the Old-Timer as their official show car of 2018. Not only did it shine like a star, but the exposed headlight capsules helped keep the vintage feel of the build.

SAFETY FIRST
A few things were added to this build that not everyone would even think to put on their machine as a safety precaution. The most obvious would be the 3500 Warn winch, chosen over the 4500 option to save space.

While especially important for the rock-crawling mishaps this car was built to encounter, a winch is great for so many unforeseen situations that might happen on any ride. Two things that are hidden on this build, but definitely add peace of mind, would be the PC1200 Extreme Odyssey battery and the Hess Motorsports billet engine mounts, crossbar, and bolts.

Some consider a lead battery to be safer and more reliable compared to a lithium battery. Jonathan felt the weight penalty was worth it for this build. The multiple 6061 solid billet engine mount components reduce the possibility of bolts being sheared. In continuing to add protection, a 1/2-inch skid plate was attached to the car.

The front corners of the skid plate needed to be mildly customized to work with the new body shape. Because it is made from ultra-high-molecular-weight polyethylene, it was not only easy to modify without damaging the plate, it also saved weight on the build. It has also held up over time. Stock steering racks can be a point of failure when driven hard, so quality was upgraded with a Sandcraft RCR Motorsports steering rack and bearing carrier.

Finally, a few survival tools including a Rotopax water container, a fire extinguisher, and a shovel were thrown into the mix just in case.

PRO PERFORMANCE
A 2014 RZR obviously has a few disadvantages over a current model, but Jonathan was able to step up the performance with his modifications. Because this car was meant to be a rock crawler, it obviously needed clutch upgrades to handle the 33-inch Kanati Terra Master tires mounted on Raceline Mamba wheels. It has a number of heavy-duty parts that took the place of stock.

Jonathan originally ran 4-inch portals on the Old-Timer. Portals are gear reduction units that mount at the end of the axles. They allow the use of large tires without modifying the transmission or differential gearing. He often drove higher-speed local BLM trails when he wasn’t playing in the rocks. He quickly recognized that he really had to work behind the wheel at speeds over 30 mph, and with the added weight to the suspension, the ride was pretty rough.

Because of the added leverage from the portals, his build was vulnerable to failures such as broken tie-rods and A-arms. With all the downsides he found, he ultimately decided to leave the portals off this project. A high-strength spider insert from Starting Line Products replaced the stock component, along with SLP’s High Altitude kit to help this clutch survive the mountains of New Mexico.

Multiple air filter components, including a custom intake system, were added as well for engine performance. An air intake pre-filter helps keep heavy dirt from getting to the air filter and clutch intake. The foam Uni filter helps make overall maintenance easier with the ability to wash and reuse the filter, which is super convenient for desert cars. An ATV-sized pre-filter was actually used as a CVT pre-filter for the custom air intakes.

Of course, this wouldn’t be a hot rod without an exhaust. Jonathan admits that he isn’t enthused about having a loud ride, but the Gibson SFT Superflow was worth it. This exhaust has a chambered muffler that won’t blow the packing out, which he says is another RZR flaw.

HEAVY LIFTING
Jonathan enjoys driving trails that might give his car a beating, but that doesn’t mean he wants to take one with it. Because the collars seized on the Walker Evans shocks that originally came on the car, he upgraded to Fox 2.5 and 3.0 internal bypass shocks. SuperATV heavy-duty rear trailing arms were a bulletproof choice with a price that won’t shoot you in the foot.

After straightening bent rods multiple times, Jonathan moved on to heavy-duty radius rods and arms as well. Front forward upper and lower control arms from High Lifter worked hand in hand with the steering stabilizer to cancel out bump-steer.

High Lifter also improved the strength and ground clearance of the front suspension without any complicated adjustable pivots. ZBroz’s heavy-duty ball joints and SuperATV sway bar brackets hold it all together for the tough terrain.

IN CONCLUSION
For an older model with plenty of hard miles racked up, this car has reached its potential to the fullest. Although there weren’t any turbo modifications added to this build, it still demonstrated plenty of power in all situations.

We were fortunate enough to test this car in Johnson Valley during the King of the Hammers. The terrain there varies from gnarly rock to desert to dunes. This car was built to ride mainly desert and crawl rocks, and for that, it is more than capable.

The handling was great in desert sections, so we totally understand why the portals weren’t worth it. Rocks were also no problem for the Old-Timer, although a gear reduction would help extend the life of the drive train. The ride was fairly smooth with the help of the Fox shocks and the overall engineering of the car.

Because the car was not meant for the dunes, you would probably go through a few belts if you took this bad boy to Glamis. However, if you found yourself in a deep sand wash or just going up a sandy hill on occasion, then the power here is plenty.

It is always interesting to see an owner/builder who has a vision and can then make that vision a successful reality. This isn’t art or a showpiece, but a machine with the goods to handle tough use. Long live old-timers. 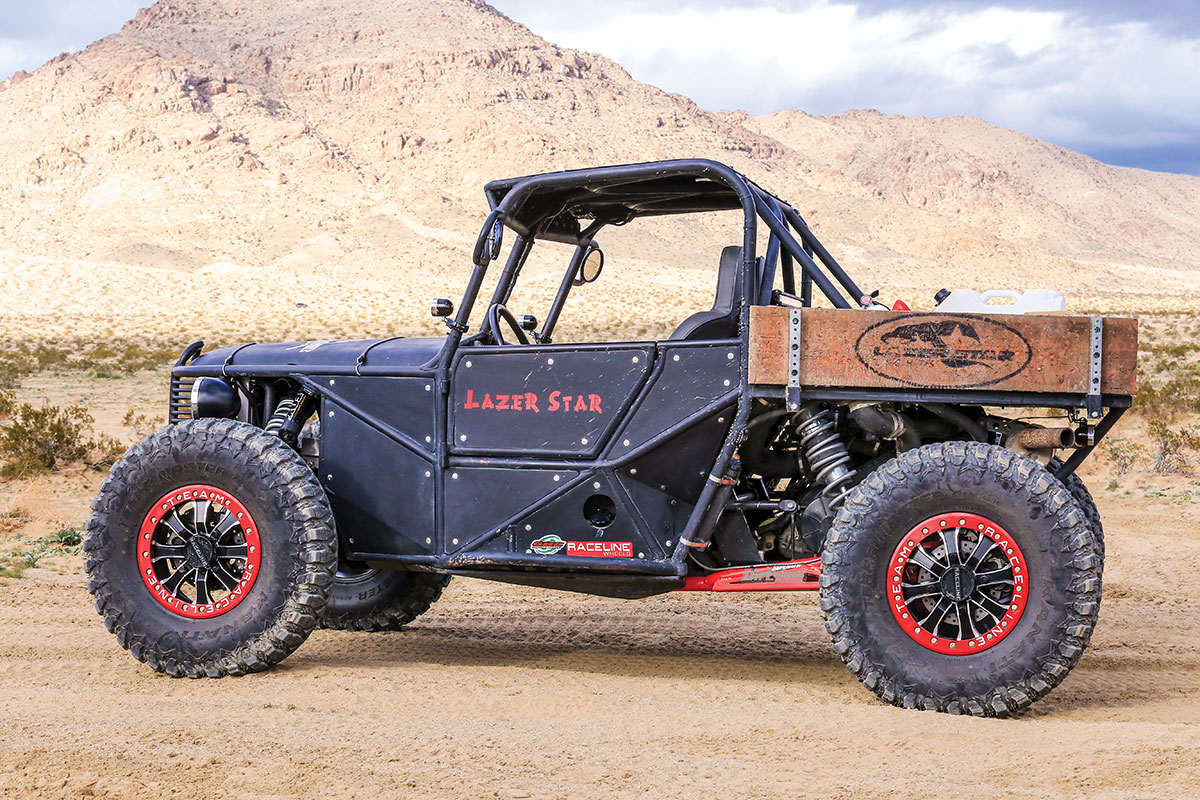