From a racer backwards By the staff of Dirt Wheels

As cool and purposeful as race machinery looks, few people ever bother to drive a race build for recreation. The sad truth is, the restrictions required by race organizations (largely for crash safety) are anything but user-friendly. Assault originally created this General 4 as a racer for a NORRA Baja-based 1000-mile rally-type stage race. While it was hoped the car would make a successful weapon for that one race, the General idea (see what we did there) was to have fun. There were no plans to continue racing the General.

Once it was back from Mexico, the General went to Moab where we tested it. We saw firsthand how odd it is to drive trails on a car with a race cage, intrusion bars, window nets and no doors. You entered and exited the car climbing through the window, and outside vision is rough in technical terrain. That is a great plan for avoiding injury in a high-speed crash but annoying for recreation.

THE JOURNEY FROM EL GENERAL

Building any competitive race machine is painstaking, but this is closer to a restoration or perhaps even a resurrection. As Assault’s Marcelo Danze watched the racer grow dusty, he felt there was a new life in store—and well-deserved—in the cards. He built the General racer for fun, and he started to think of mods that would bring the fun back for trail driving.

The performance part of the build was already finished. It had been transformed from a medium-travel, 60-inch stocker to a long-travel HCR kit that widened the track to 70 inches, added 2 inches of wheelbase and boosted travel to over 17 inches. The kit added 1.25 inches of ground clearance, but the wider arms allowed 33-inch tires with no trouble for even more ground clearance. Controlling the HCR A-arms are Walker Evans Velocity Series shocks. Wider RCV Axles 4340 Series chromoly axles are included with the HCR kit.

While the racer’s 33-inch tires were fine for high-speed running in a race, they’d handicap the General as a trail machine, so it was dropped back to 30-inch Fuel Gripper tires on 14-inch Fuel Anza beadlock wheels.

Not all of the race parts stayed. The one-off race cage, nerf bars and non-opening doors all went in a pile, and the stock cage and doors went back on. Assault created a new adventure rack for the roof. The dump bed was removed for the race to ease drivetrain access, but Marcelo ordered it remounted. He had Assault craftsmen come up with a second adventure rack mounted to the bed sides. The rack serves as mounting for a RotopaX fuel pack and a first-aid-kit container that looks like a second fuel can. There is also a spare CVT belt holder.

When the car was transformed for racing, the rear-seat area was gutted and fitted with twin storage compartments. In a fit of fancy to add humor to the adventure build, Marcelo added a Porta Potti chemical toilet in place of one of the back seats, then added a water tank to the opposite door in case he wants to add a shower later. Then a slightly less fanciful smoker was added to the bed. It is totally functional. We saw it smoking up hot dogs at a destination in the middle of the dunes at Glamis!

Assault had a host of products on the racer, and they stayed on the rec General—mirrors, sun visors, a grill, harness-type seat belts, light mounts and a fire-extinguisher kit. Assault added a new steering wheel, a mount kit and a quick-release to remove the wheel. Other details include an S&B Particle Separator to make life easier for the K&N filter.

Simpson Pro Sport seats combine safety, comfort and style. Those race seats and the Rugged Radios-supplied helmet air system, car-to-car radio, and an intercom to connect the driver and navigator for the racer are equally nice in a trail machine.

In racing, there is no such thing as too much light, so a Baja Designs custom light bar sporting six XL Pro lights, pod lights and a pair of Buggy Whips lighted quick-disconnect whips were added. Those lights are just as handy for fun driving, and they stayed on the car. Assault designed the custom light bar into the front of the new adventure rack.

The stock General is rated at 92 horsepower, but Assault added a Dynojet clutch kit and a K&N filter and intake system. On the other side of the engine is a Trinity Racing exhaust system. Those engine mods let the engine produce all the power possible without hurting reliability. 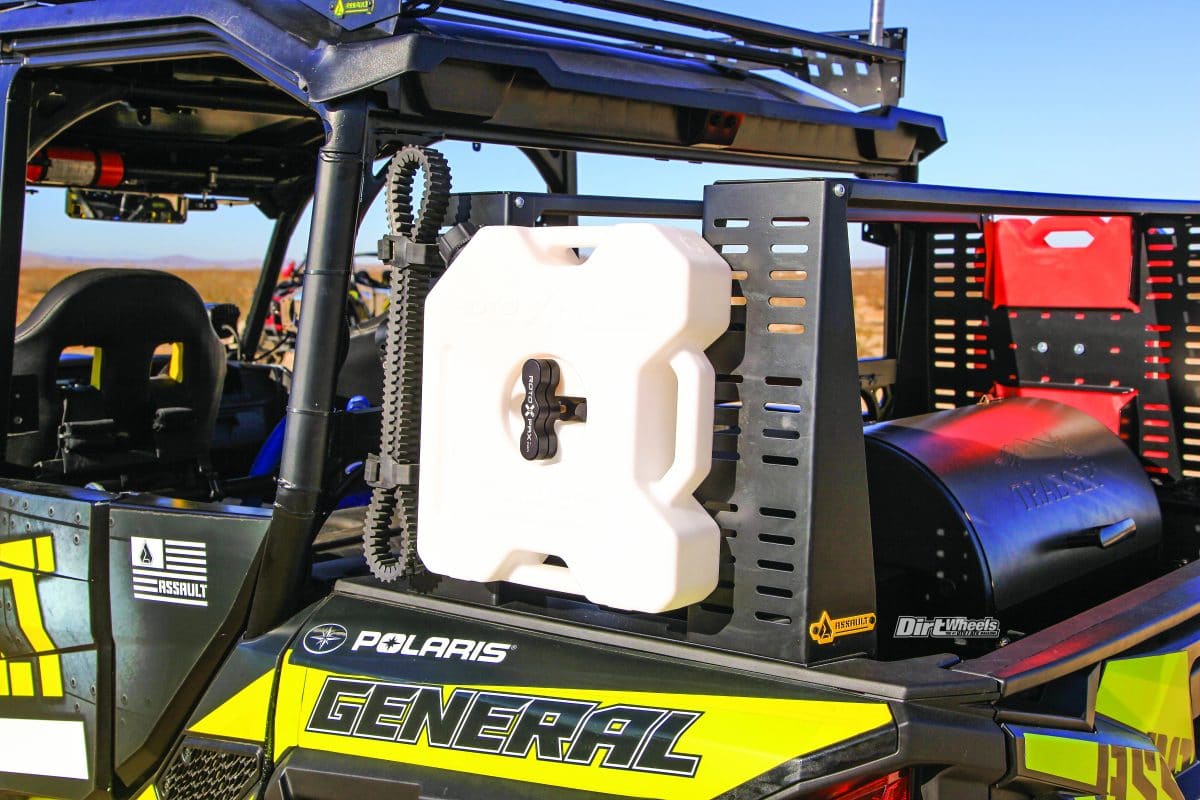 FUN, BUT NOTHING TO LAUGH AT

After completing the NORRA multi-day 1,000-mile event in Baja, we drove the race version in Moab, Utah. The suspension and engine performance were great at trail speeds, but crawling into the car through a window is a pain for trail use, and vision is hampered. For our second round with Assault and the General, we met up at the rough-and-tumble suspension testing area near Barstow, California. There are far more trail options than hammering Trophy Truck whoops. Though many of those options include an abnormal serving of sharp, imbedded and loose rock.

Despite the suspension setup being created for high-speed running, it remained supremely cushy and comfortable on the roughest sections. In the current configuration it doesn’t love fast whoops. Maybe it is a little heavier in the rear now? It still rails the smaller chop at speed.

We have always liked the comfort and layout of the General cab, as well as the forward and side visibility. It was great to have those traits restored and bolstered by the Simpson seats. Vision forward is great, and we even found ourselves appreciating and using the flip-down sun visors climbing rock trails right into the sun.

Assault chose well when it came to what race equipment should stay and what stock parts deserved to return to their original homes. The original build was aimed at all-day race comfort, and the new build has day-long trail comfort and performance as a prime objective.

Power from the normally aspirated engine is more than trail-ready, the CVT engagement is crisp but smooth, and the gearing was plenty low for technical climbs with the 30-inch tires (stock is 27 inches).

We laughed at some of the changes. We hate to admit that our humor extended to the bed-mounted smoker. But, a mouth-watering hot dog in the dunes wiped that smile from our faces. The smoker is quick-release with thumb screws. That is fortunate. We doubt it would take much chattery off-road punishment and live.

Too many old race cars just sit when they are no longer sought-after racers. It is great to see this General return to its trail and recreation roots. On the other hand, Assault still has those race parts in case Mexico calls again. We can only wish that Polaris offered a long-travel version of the General.