By the staff of Dirt Wheel 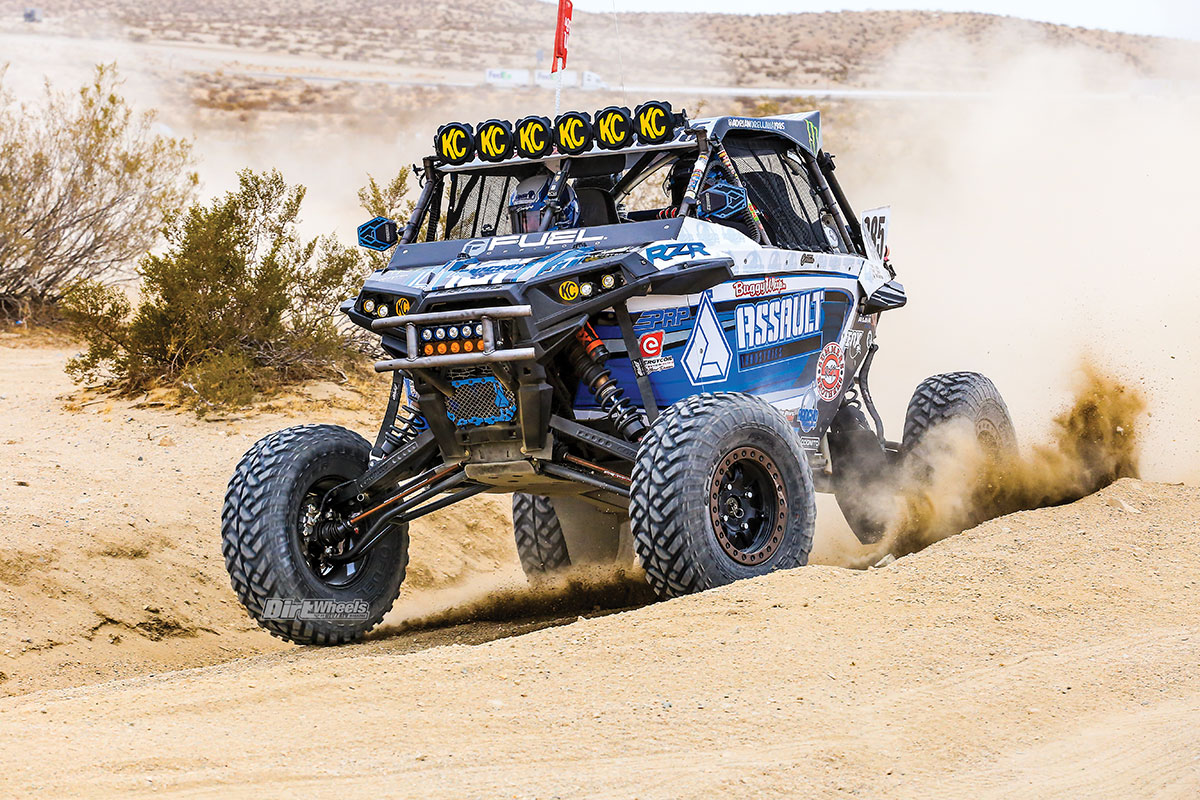 UTV racer Adrian Orellana didn’t drift into the sport by buying a recreational car and gradually adding to it. He bought a brand-new Polaris RZR XP 1000 and immediately tore the entire car apart and delivered the frame to Fabwerx. Fabwerx had no qualms about cutting nearly the entire stock frame away.

Basically, Fabwerx started with the two main-frame rails and constructed a new racer from that starting point. Orellana’s race team is Rancho Racing. Rancho Racing is an LLC based in his garage. It is available to work for others, but in reality it runs his race team and preps his race car. You will see from the price list that a build like this isn’t for the faint-hearted, but considering that he is battling at the front of the normally aspirated field, he is running a budget effort that is very effective.

When starting his build, Adrian kept only the parts of the stock frame that are required by race organizations. Generally, race organizations require that the sides of the car be closed (it can’t have doors that open), it has a stronger roll cage and some require a fuel cell rather than a normal gas tank. Most also require window nets.

All require harness-type seat belts. Adrian wanted to handle all those tasks with a specific build rather than piling them on the stock car. Front and rear bumpers are incorporated right into the frame. The front fascia and a scrap of the rear fenders are all that is left of the stock body—just enough to keep the Polaris RZR look.

After he had a complete frame, it was time to make it a car. A Cognito Motorsports long-travel kit handled the suspension situation. The Cognito parts are metal art. In addition to being light and strong, they are proven with many race and championship race wins.

To control the Cognito arms, Rancho Racing chose to use Fox’s aluminum-bodied shocks with aluminum internals. These are Podium Internal Bypass RC2 shocks. For rolling stock, he chose Fuel beadlock wheels and Gripper tires. Together they provide the durability and traction for off-road racing.

There was no chance that the engine would be ignored. Benchmark Performance takes care of the assembly and dyno testing, Alba Racing handles the parts for the top end, Trinity dials in the exhaust and Rancho does its own clutching. Rancho does its own transmission work, and Summer Brothers supplies the axles. The trans and axles get cryoheat-treated for strength. Energy Coil aids the ignition.

Rancho claims the engine has been very reliable while putting out roughly 20 percent more power than stock. At 1400 to 1500 miles, the engine gets a leak-down test. If the numbers look good, it may go a few more miles, but it is torn down, inspected and rebuilt before it ever reaches 2000 race miles.

Inside the XP are custom Rancho Racing-patterned PRP seats and all of the other required safety equipment. It has Assault harnesses, PRP window nets and the required radios from Rugged Radios. Rugged Radios also delivers clean air to the driver and navigator helmets. There are also switches to control the KC HiLites lights. The front light bar has quick-disconnects with pull pins. Mob Armor provided the Elite iPad GPS and the GPS app. Randy Ellis Designs did some fabrication and worked with Rancho to wire the car with military-specification connections.

In addition to the Assault harnesses, the Rancho car has the full Assault package, including convenience and dress-up items like the mirrors and grill insert and reliability parts like heavy-duty radius rods.

IT’S IN THE DETAILS

There is a lot of detailing on the Rancho Racing RZR. At one point an exposed frame tube is used to hold duct tape ready for quick use. Another frame tube has a handy bundle of zip-ties, and the triangular openings in front of the window nets have a spare belt zip-tied in on both sides. Rancho also uses limiting straps for the suspension. That is a good idea that we don’t see much of on UTVs. Electrical parts are double-stacked, but only one is plugged in. If there is a problem, Adrian can simply unplug the main component and plug in the back-up. Smart! He finished up the car with a Rancho Racing wrap from ProLine Wraps.

Adrian and Rancho Racing are a team on a budget with a truck, a small trailer and volunteer pit crew. In spite of that, the team is usually seen racing near the front of the Normally Aspirated class. We asked how the UTV World Championship went for the team, and Adrian’s response was matter-of-fact: “It was great up until lap eight. We started 38th, and by end of lap one we were 10th.

Then lap two we were top five, and by the third lap we were sitting third. After battling with fourth and fifth for a bit, we developed fuel-pump issues and we lost 20 minutes. We proved we can move up quick and that we are a contender for sure. We just need a little luck.”

Rancho recently finished the Mint 400 and the UTV World Championships, so in a way, they make their own luck. By doing much of their own prep on the car, and doing it right, they put themselves in position to do well. And, finishing regularly keeps them in the points.

We shot the photos as Rancho and other teams were getting shake-down drives on the way to the Mint 400. Both Adrian and his co-driver looked longingly as the high-budget rigs rolled in, but shook off the envy, loaded up and headed out to run with the big boys.