Because it’s a Honda By the staff of Dirt Wheels

Rugged Radios’ Kalani Corn is a long-term sport quad fan and Honda guy. He has full faith in Honda’s legendary quality and performance. So much so, when he heard that Honda would have a sport UTV, he sold his Brand P before ever seeing the Talon 1000R. Rugged Radios is always doing fitment projects with new machines, and the fledgling Talon 1000R was no exception. When it arrived, Corn set himself up to shepherd the new machine. At the time there were far fewer options for the Talon than there are now. For example, the custom ostrich-look PRP seats seen in the car were the first pair of PRP Talon seats out of the PRP factory.

Kalani attends a lot of events representing Rugged Radios. At some events he is selling and installing products for customers, and other times he attends races and handles racer support for fast folks running Rugged Radios equipment. Having a UTV on hand at these events is a bonus, and the Honda Talon had that job.

Remember that Kalani is one of the Honda faithful. He was more than happy with the Talon 1000R, saying, “The stock Talon was awesome. For somebody used to hammering gears on a quad, the sound and feeling of the twin cylinder revving out and grabbing gears was music for the gearhead ears. This is a UTV that allows you to really push the pace. I’ve never driven a car that could be tossed into turns so hard while staying planted. It doesn’t want to bicycle. At Dunefest in Oregon, I was able to set the fast time for normally aspirated UTVs on a twisty, timed sand course. Hit the brakes, downshift and the Talon comes out of turns hard. That was when the Talon was mostly stock, and that included the tires. I was able to hang with friends in their turbo cars.”

During the time he had the Talon, Kalani spent 220 days on the road for work. Putting the car together had to be done on the run. In some cases, the changes were to dial it in for an upcoming event. Naturally, many Rugged products found their way inside. A car-to-car, hand-held radio; a two-person intercom; and a two-person helmet pumper system with a variable-speed module are most of the parts that the car showcased for Rugged.

At many events he works long hours, and his only time to get in the UTV is in the dark. He claimed the stock lights are pretty good, but vastly more lumens were required. This came from a massive KC HiLiTES light bar. That gave the car the light required for night runs.

His schedule transitioned from sand events to the Rally on the Rocks in Moab, Utah. The far more punishing conditions in Moab prompted a flurry of modifications. Early on, Honda was the best and most reliable source for accessories. Kalani added a full skid plate, side skid plates, and plastic skid-type guards for the front A-arms and the rear trailing arms. Rock-slider nerf bars, a roof, and steel front and rear bumpers were added,. He softened up the suspension, which lowered the ride a bit. He bought back the loss of clearance and then some with Fuel 15-inch Anza beadlock wheels with 32-inch (actually 32.5 inches) BFG Baja tires that are 9.5 inches wide. Honda specialist Jackson Racing is the only source for the off-road-only BFG tires. He also added a 3500-pound-rated Warn winch with a Factor 55 foldable shackle. A winch can be vital in Moab.

The PRP seats and Assault Industries Bomber mirrors found their way on before Moab as well. For those long days, a 35-quart Yeti cooler found its way into the bed area. Not one to hold such an expensive cooler with bungee cords or tie-down straps, Kalani had NV Fab build aluminum mounts, brackets for the light bar and install all of the parts that did not come from Rugged.

With those changes, Kalani was amazed how well the Honda worked on the challenging Moab slick-rock routes. The gearing was low enough, and the 4WD worked fine. The skid plates gave peace of mind as well. “Honda makes great products,” Kalani insisted. “Those Honda nerf bars are strong. I was able to use them to pivot around large rocks. Just let the bars drag on the rock and pivot the whole car!”

After talking to an extremely satisfied customer, Kalani called DynoJet and ordered a Power Commander with a tune specific to the Talon. The tune made a huge difference. The Honda felt happy, and power was improved everywhere. Kalani isn’t the first person we have heard from that claims DynoJet has a real answer for the Talon.

Rugged Radios vehicles have a long history of looking great and even being singular examples of truly unique off-road machines. The Honda Talon had a temporary home at Rugged, so it didn’t get one of the historic body swaps that Rugged is famous for, but Kalani wanted it to stand out. He had Wolf Designs add a custom Rugged Radios Honda eagle tribute graphic to the hood. The color of the wheels ties in, and the car looks very nice for a machine with a stock cage.

The highlight of the cab is the comfy PRP seats. The color of the faux ostrich seats works with the wheels and hood graphic. It is, obviously, fully equipped with communication devices and the grab-handle-mounted GPS. It isn’t that often that you need filtered air pumped into your helmet, but when you need it, the pumper unit handles that fine.

For most of us, a lot of our riding is somewhat consistent, and setting your machine up is pretty easy. When your life is hitting different events in different parts of the country, setting up a single car is tougher. Add in the fact that some events are for sand dunes and other revolve around trails like King of the Hammers or Rally on the Rocks. Starting with the Honda Talon 1000R and keeping the mods pretty basic worked out well for Rugged and Kalani. Had the car stayed in the stable longer, the next step would have been some suspension mods. Otherwise, the power, ride compartment and the fun factor worked out just fine no matter where he needed to drive it.

This is a project that appeals to us. Add plenty of protection, make the car convenient with lights and communications, and dial in the comfort. Sure, a Turbo kit would be nice, but basically keep it stock, and it’s easy to maintain and drive—heavy emphasis on the drive. Just get out and get your miles and smiles in. We’d say Kalani got what he was after. 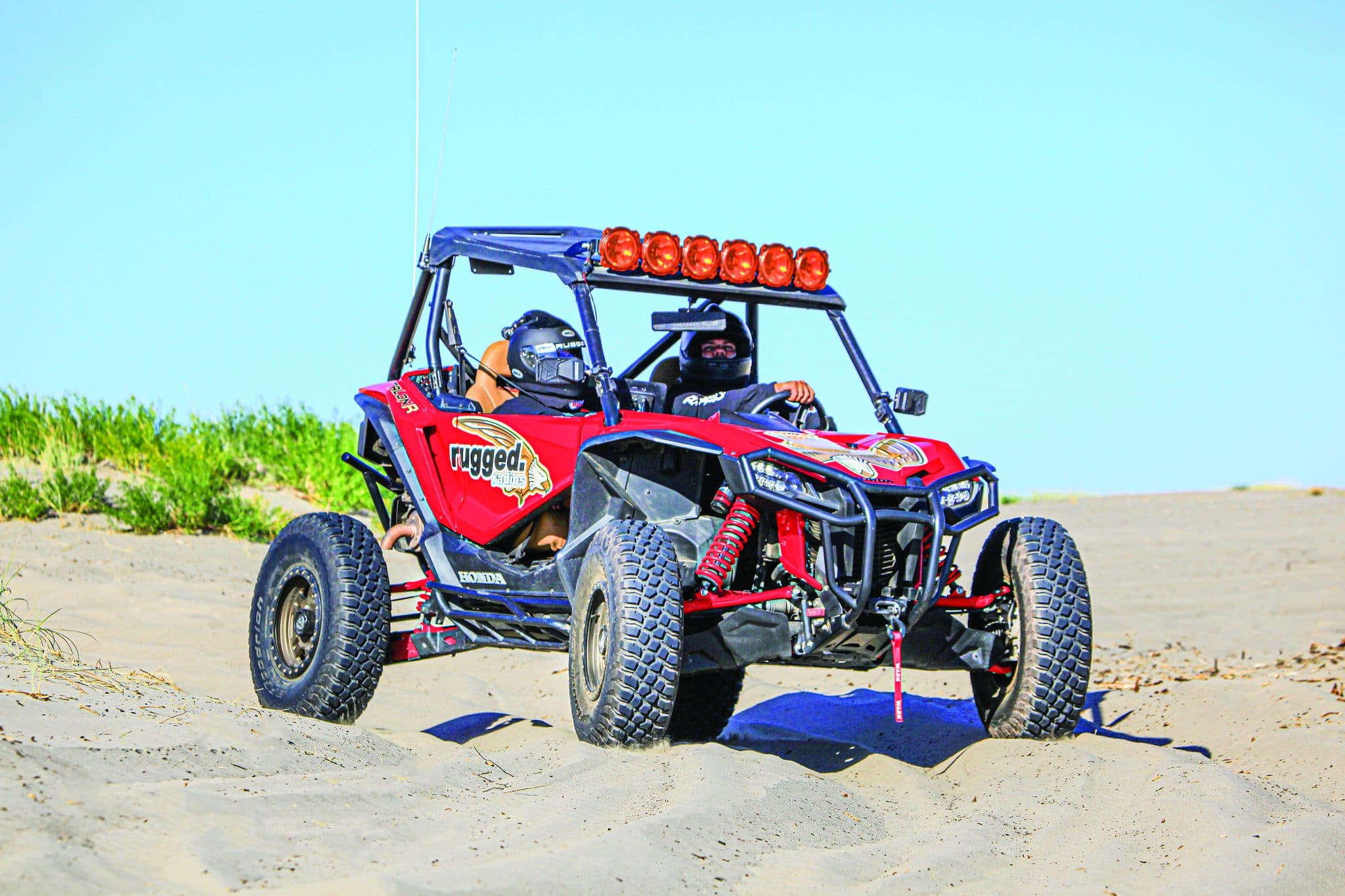