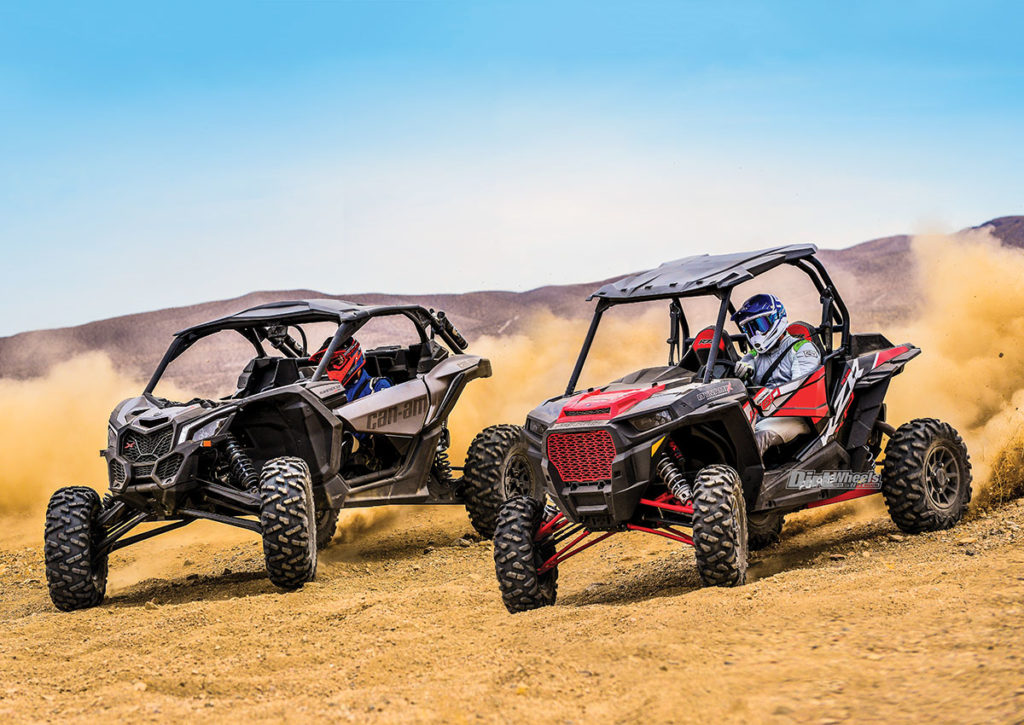 In the production UTV world of colossal horsepower and monstrous torque, there are two brands that stand in a power struggle atop the sport UTV world. The two companies that offer these titans of the UTV world are Polaris and Can-Am. The machines we’re speaking of are the Can-Am Maverick X3 X rs and Polaris RZR XP Turbo Dynamix. This contest shows no sign of ending, and it’s not just an engine power struggle; it’s a fight to have the best suspension, most comfort, superior 4WD, handling and other important traits. In the end, it’s all about who has the best UTV. Luckily, we’ve tested the machines back to back to back through the years. Before the X3 was around, Can-Am was still in the fight with its Maverick 1000R Turbo, but the sales success of the RZR couldn’t be ignored. That’s when Can-Am answered late in 2016 with the 154-horsepower 2017 Maverick X3 Turbo, briefly topping the 2016 RZR XP Turbo’s 144 horsepower. Polaris announced a month later that the 2017 RZR XP Turbo topped Can-Am’s horsepower number with 168 horsepower.

Now, for 2018, we all know that the Can-Am X3 Turbo R models received an updated intercooler and fuel pump that helped make an astounding 172 horsepower out of the 900cc Ace turbocharged engine, while the RZR XP Turbo 925cc engine stayed at 168 horsepower. The madness doesn’t end there.

When we look at these two machines, numbers come into play. For this test we put the two most expensive two-seat versions head to head. Since it was tough to get a 2018 X rs on short notice, legendary desert racer Chris Blais lent his driving expertise and his new Can-Am for the test.

Can-Am’s X3 X rs retails for $26,899 and the Polaris RZR XP Turbo Dynamix retails for $25,999. The X3 X rs has massive suspension travel with 22 inches of wheel travel in the front and 24 inches of travel in the rear. Fully adjustable Fox RC2 2.5 front shocks and Fox RC2 3.0 rear shocks both offer an internal bypass on the X rs. However, the ground clearance is 15 inches, so in theory, the Can-Am can’t use all its suspension travel before hitting the frame.

Polaris has always been known for pushing the envelope when it comes to never-before-seen products in their RZR platform. For the 2018 RZR XP Turbo Dynamix model, Polaris and Fox worked on something incredibly cool, which is the Dynamix Smart Suspension system. The system electronically adjusts the shock settings on the fly, and it does so 200 times a second while the ECU monitors readings from seven different sensors. It then adjusts each individual shock to be stiffer or softer as needed. It features Fox Podium 2.5 Live Valve shocks with bottom-out control on all four wheels. The front has 16 inches of wheel travel, while the rear offers 18 inches of travel. It has less ground clearance than the X rs, but the RZR is better balanced to not hit the frame at 13.5 inches of ground clearance. The Smart Suspension has three modes that are selectable by a switch in the cab—Comfort, Sport and Firm. Comfort sets the suspension in the softest setting. Sport is in the middle for the ultimate performance and high-speed handling. The Firm setting sets the compression damping to fully stiff for extreme driving.

We tested both machines in harsh desert terrain, rock crawling, in the mountains, loose volcanic rock, treacherous hill-climbs and in the sand dunes. Each machine has its strong points in each of those conditions. Like we’ve said in the past, Can-Am’s locking front differential isn’t as good as the Polaris, and that is the same story this year. The Polaris crawls over the nastiest rock sections and boulders without drama, while the X3 would spin over the large boulders. If we kept a steady throttle towards the obstacles, the X rs would bounce over the rocks. But, comparing the 2018 X rs to the 2017 X ds model we tested last year, the wider X rs seemed to rock-crawl easier.

Even with the 18-horsepower increase, the Can-Am fell short on the Polaris’ bottom-end power. While drag racing from a fixed position, the Polaris would jump out front early, but by the end, it was no match for the X3’s three-cylinder top end. At a rolling start at 20 mph, the X3 continually beat the Dynamix from start to finish with a pretty decent lead at the end. With the Dynamix’s 90-inch wheelbase and 64-inch width, it triumphs over the X rs’ width and 102-inch wheelbase in tight turns, short-course-type trails and quick turning. On the flip side, though, the X rs commands the deep whoops and nasty rain ruts while the Dynamix bucks and bounces through. The Dynamix is a much better low-speed driver with superb low-end power compared to the X3, which feels soft at slow speeds. The three-cylinder on the X3 likes to live on the edge of midrange and top-end speeds, and the suspension travel can handle the speed and abuse elegantly. The Live Valve Fox shocks on the Dynamix felt glass-smooth over smaller objects such as rocks, chop, and washboard roads.

Cornering is a dream in the X3. With the help of the wide stance, low center of gravity and low seating position, it sticks to the ground like it’s on flypaper. The Dynamix has a tougher time in the corners, as it has much more body roll and we didn’t feel as immersed in the driver’s seat as we did in the Can-Am. But, in any type of East Coast driving, the XP Turbo Dynamix would take the win, even over a 64-inch-wide X3, since it has the shorter wheelbase. Both machines did well in the sand, and there’s nothing like a turbocharged car to up the fun factor in the dunes.

For 2018 the Can-Am X3 X rs models come with four-point harnesses for both seats, while the Dynamix has standard automotive-style seat belts. The Dynamix has much more technology than that of the X3 with its 7-inch Ride Command system. Its glove-touch, weather-resistant display works with the Live Valve shocks to display active compression damping, selected mode, G-force, pedal position, steering angle, brake status and diagnostics, allowing us to see real-time control. It also comes with an AM/FM radio, group ride, GoPro control and a rear-view camera. The X3 does come standard with a rear-view mirror, push-to-start engine, DPS (three-way) power steering and Eco mode. We seemed to constantly use the maximum setting on the power steering, which was a little bit easier to handle than the RZR’s power steering.

Like we mentioned, the low and leaned-back seats in the X rs make us feel more a part of the car, but the long, front fascia makes it tough to see before making descents. In the RZR, it has less blind spots than the X3, but the stock seats flex a lot, and the higher center of gravity makes most test drivers uneasy when cornering hard. With that in mind, the Smart Suspension Fox shocks help tremendously with the body roll the RZR has had in the past.

The X rs has 30-inch Bighorn 2.0 tires with 14-inch standard aluminum beadlocks, while the RZR has 29-inch Bighorn 2.0 tires with 14-inch standard aluminum wheels. We keep hoping that Polaris will add beadlock wheels to their high-end turbo UTVs, but we got skunked again this year. The Can-Am comes standard with a plastic roof, but both have plastic skid plates and LED headlights and taillights. The RZR is also the winner in the service department. It’s much easier to access parts that are under body panels in the Polaris when there is so much more plastic to remove to get to parts on the X3.

You can’t say that either one of these machines is better for all types of driving. Each has its strengths and must pick battles that suit those advantages. The Polaris engine still outperforms the Can-Am’s in the low-end torque and a bit in the midrange as well, and that is important for a wide variety of trail situations. The braking is more refined on the Polaris, it has better visibility when looking out towards the front end, and it’s easier to climb in and out of. Polaris’s four-wheel-drive system is still knocking it out of the park for rock crawling and hill-climbs. The Dynamix Live Valve Fox shocks make it simple for that everyday Joe that wants to change the suspension on the fly, the ability to use the rear-view camera or to bump some tunes with the radio. The RZR is still a superb all-around machine.

But, if you’re the type that craves high-speed, adrenaline-pumping, whoop-pounding fun, then you better be looking hard at the X3 X rs. It excels at higher speeds, will rock crawl okay and has heart-pumping traction on flatter ground. The cornering is unmatched, and the immersive feeling you have in the cockpit is undeniable. The 72-inch width, along with its monumental wheel travel, dominates the desert. The top-end power is wicked, and the delivery is smooth throughout the powerband. 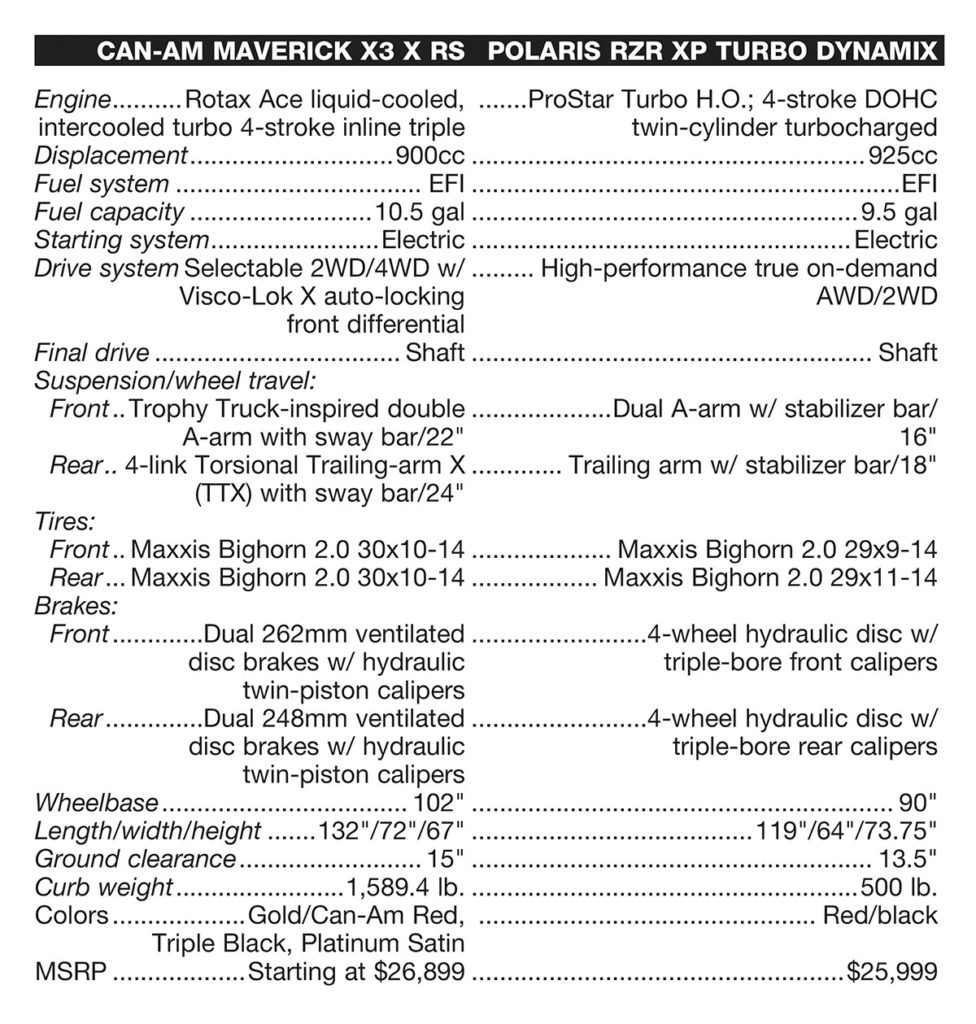 When you are pushing it, the X3 X rs has suspension, ergonomic comfort and rally car-like handling that the RZR just doesn’t have. Link that with only a $900 price increase for the X rs, and the Maverick X3 X rs is the king of the turbos for aggressive drivers who crave speed!

WIDE OPEN: Does sway-bar disconnect belong on your UTV?