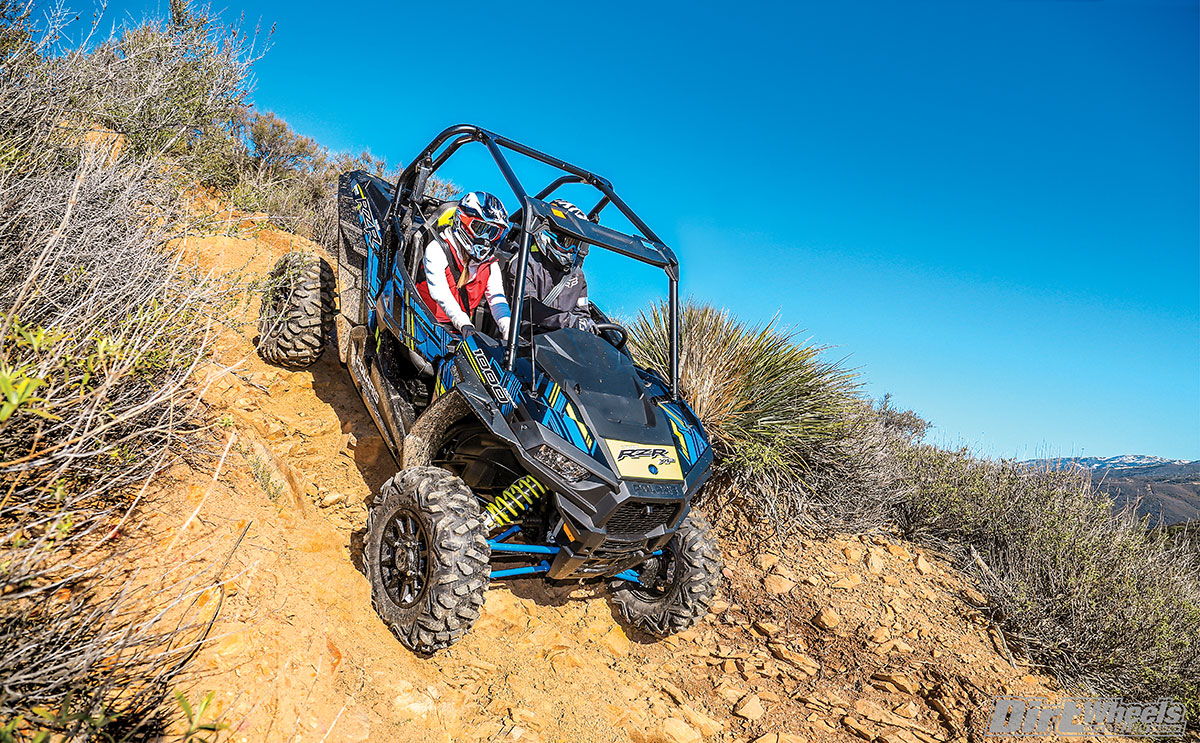 Polaris is a manufacturer that is well known for giving the people what they really want when it comes to the ATV and UTV market. The company has built an empire and a great lineup of very capable off-road machinery. One of our favorite lines is the Xtreme Performance line of RZRs, which is where the 2017 Polaris RZR XP 1000 Ride Command is nestled. This well-built machine features all the same quality and functionality for sport off-roading that the rest of the XP lineup carries, but they incorporated their new Ride Command system into it, along with a great color scheme that will wow your buddies!

The biggest feature of this RZR XP 1000 is its Ride Command system. Polaris released their patented system last year in 2016 to a thrilled audience. The redesigned dash has a 7-inch touchscreen display that can be utilized while wearing gloves. It has all the standard functions of a normal gauge cluster while also including a GPS, front and rear cameras, a sound system, accessory key position and more.

The GPS system allows you to record your trail rides, set waypoints along the way and transfer the ride data to a USB device. It allows you to see trails that are around you and will give you the longitude and latitude of your position, along with how many miles you have driven, your max speed, average speed and more. You can select an option to have the system show you true north or have the arrow point the direction you are traveling. The Ride Command system also enables you to track your buddies who also have the system in their machines so you always know where everyone in your group is. There is also the ability to connect Sena headsets via Bluetooth to talk to your friends in other machines.

The Ride Command system includes a front and rear camera that will help you load and unload your machine onto your trailer. In some cases you can use the cameras to view what you cannot see while driving, but the cameras don’t work after you are going over 10–15 miles per hour. We aren’t fond of how downward the cameras are pointed, and they don’t show the edges of the RZR’s tires when backing up, so you can’t see whether or not you are perfectly in line with your ramps. The biggest plus, though, with the front camera is that if you can’t see over a ledge or in rocks, just switch on the camera and it will give you an extra set of eyes. Another awesome function is the GoPro control feature that allows you to manage GoPro cameras that you have mounted on your machine.

Finally, the last great feature of the 2017 Polaris RZR XP 1000 Ride Command would be the built-in sound system that comes in the doors of the machine. Listening to music is great when you are out on the trail, and the Ride Command will let you connect your phone or listening device through Bluetooth, an auxiliary cable or USB. If you have headsets connected, you can even tak e phone calls while driving. There is a built-in AM/FM radio as well. The sound system has an adjustable EQ, and there is a function where the volume will raise and lower depending on the speeds you are traveling. We wouldn’t mind having a subwoofer and two more speakers in the machine, though.

The Ride Command features Polaris’ 110-horsepower ProStar 999cc four-stroke, parallel twin-cylinder engine that is electronically fuel-injected and is liquid-cooled. There are four valves per cylinder actuated by dual-overhead-cam shafts. The electronic fuel-injection system uses dual 48mm throttle bodies and long-tip fuel injectors, so the throttle response is pretty instantaneous. There is a lot of bottom-end hit in the power curve of this RZR that slowly levels off towards the top end. The pedal feel is nice and controllable in most situations, and the bottom-end torque is great for rock crawling and the vast majority of trail experiences.

The transmission is an automatic CVT style that utilizes a CVT belt. The good part about a CVT is that you can break the belt without hurting the rest of the transmission. However, the bad part is that it can be easy to break a belt. The gear selector gives you the options of park, reverse, neutral, low and high gears. The shifter has a smooth operation and rarely doesn’t engage, but only when you aren’t shifting precisely.

The machine has Polaris’ On-Demand all-wheel-drive system. You can choose between two-wheel drive or all-wheel drive with the push of a dash-mounted button. In AWD the RZR mainly utilizes the rear wheels, unless the system senses the rear tires slipping, then the fronts will quickly engage. We rarely come upon terrain that this system doesn’t work well on, and it certainly doesn’t falter any more than other AWD systems from different manufacturers. The wheels are all shaft-driven out of the CVT.

Polaris had the best suspension in the business for a stock machine until the new Can-Am X3 came along; however, the Walker Evans shocks on this machine still shine brightly in all types of terrain. The front end uses a dual-A-arm design with 2.0-inch Walker Evans needle shocks that allows 16 inches of wheel travel. The 2.5-inch shock on the rear of the Ride Command provide the machine with 18 inches of wheel travel with the aid of trailing arms and a stabilizer bar. The shocks have a single compression adjustment that has 16 positions available for shock tuning.

At higher speeds the shocks have a good feel and don’t bottom easily. The Polaris handles whoop sections fairly well with a little bit of wandering. At slower speeds we noticed the machine would bottom out easier, but you can change the compression adjustments to manage bottoming resistance. Over rocks and chop the XP feels like a Cadillac with a nice, smooth ride.

The steering of the RZR is light and easy. The steering column has a little play in it, but at times that is nice while you are going over rough terrain. The machine corners quite well, but due to its higher center of gravity, it can feel a bit tippy. In comparison to an Arctic Cat Wildcat 1000, the seat height in the RZR is a few inches higher, but it is a much more comfortable ride. Our biggest gripe is that we wish the steering on the XP1K took less turns to go lock to lock. That would allow a lot less hand movement to get the RZR to go the direction you want to go. The 2017 Polaris RZR XP Turbo has a quicker steering rack than the XP 1000’s.

The Polaris RZR XP 1000 lineup has a simple yet comfortable cockpit. The dash is easily accessible so you can reach the Ride Command display with ease, open and close the dash storage bin and reach the glovebox without unhooking from the stock seat belts. There are also two cup holders in front of the shifter. The cargo bed of the RZR can hold up to 300 pounds, and there are tie-down points built into it.

The steering wheel is made of a hard plastic that could be upgraded to a wrapped wheel for comfort. You can easily adjust the height of the wheel by a lever on the steering column. The driver’s seat is adjustable and fits people who are over 6 feet tall without many issues. Stock Polaris RZR seats are some of the most comfortable seats in a stock UTV. Oftentimes we don’t go for aftermarket seats on our RZR builds and instead just add a set of four- or five-point harnesses. The RZR comes with quarter doors, but we would prefer them to come with full doors. The door latches are easy to operate.

Another great UTV in the books! We have generally been a fan of the Polaris RZR XP 1000. It comes with a powerful engine that is easy to manipulate to go fast or slow. The suspension is smooth in chop and over rocks, yet will tackle whoop sections and high-speed driving. The machine’s cornering ability is reasonable, but the higher center of gravity makes it feel a bit tippy, which you can eventually get used to. The addition of the Ride Command system is something we wish a lot more of Polaris’ lineup came with. You can have it installed on all sport performance RZR models and the new-for-2017 General 1000 Ride Command. The 2017 Polaris RZR XP 1000 Ride Command goes for $20,999. Go to www.polaris.com to learn about their entire lineup!