By the staff of Dirt Wheels, Photos by Pat Carrigan 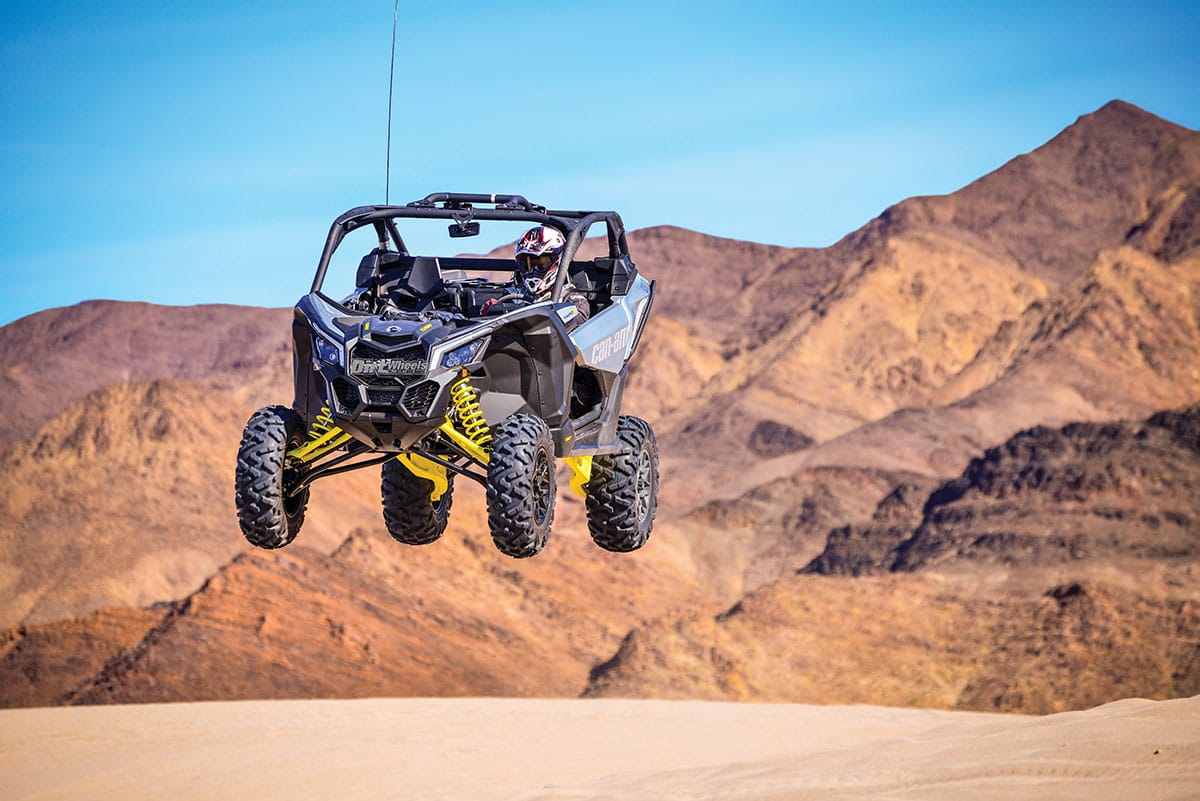 Can-Am has obviously hit a home run with the Maverick X3 platform. When it was released, it came in 64-inch- and 72-inch-wide flavors. In the end, 2017 was a banner year of race wins, championships and sales records for Can-Am. Soon after the initial releases, the Maverick X3 Max followed up with seating for four adrenaline junkies. It only makes sense that Can-Am would leverage the basic X3 platform with a variety of models utilizing the same basic, proven rolling platform, and that is what Can-Am has done for 2018.

One model that had us curious was the 120-horsepower X3 Turbo. It goes in the opposite direction from the 2018 Maverick X3 X RS Turbo R that leveraged updates to the intercooler and fuel pump to make 172 horsepower with no internal engine changes. The X3 Turbo is obviously still turbocharged, but it has no intercooler to cool the intake charge. Without the intercooler, the engine management system has to be more conservative to deal with the hotter, less dense intake charge. The result is a turbo motor rated at 120 horsepower. Why would Can-Am build a car that is mechanically identical to other X3s but with 50 horsepower less? Well, there are at least 3000 reasons—the X3 Turbo is three grand cheaper than the otherwise identical X3 Turbo R.

The horsepower difference sounds like a lot, and we won’t kid you; if you are a dune hound, you will miss the power. But, most of those ponies don’t put hooves on the ground until the Ace 900 engine is spinning pretty hard. If you mainly drive trails, you will rarely be inconvenienced by the power delivery. While driving the X3 Turbo, you may swear that the engine has more and smoother bottom power than the intercooled turbo models. Removing the intercooler is unlikely to enhance the bottom power. It is more likely that the more consistent power curve gives that feeling. The intercooled Turbo R has so much rush on the top end that it makes the bottom power feel softer than it is.

Our experience with the 900cc Rotax Ace three-cylinder engine has proven that the engine is tough. We have deduced the same from watching Can-Am X3s dominate in distance races, including winning the punishing two-week Dakar Rally! We have driven extremely powerful, modified X3s with turbo and injector mods that push the power 30 to 40 percent over stock. Imagine how well the engine will last at 120 horsepower.

We remain impressed with the Intelligent Throttle Control (iTC) throttle-by-wire system. With iTC, if the driver’s foot is bouncing around, the system filters the input to smooth the response. Performance can be further smoothed by selecting the fuel-miserly eco mode. There are two different ignition keys. The mellow key lets you relax a little if somebody else is driving your X3, and the other key is for you to have fun with. Both keys are digitally encoded to aid theft prevention.

Compared to any production machine but Can-Am’s 72-inch-wide machines, the base chassis and suspension are impressive. The X3 has a low, purposeful profile that looks like a race car. The front suspension was inspired by Trophy Trucks, and in the rear there are massive trailing arms precisely located by three radius rods on each side. In addition to being 64 inches wide, the X3 has fully adjustable 2.5-inch Fox Podium shocks that deliver 20 inches of suspension travel front and rear. Compared to some other popular designs, the X3 rear shocks are mounted at less of an angle, but the action is quite good. We see a lot of people driving X3s that are riding low. They don’t adjust the suspension as it breaks in, or they add weight with accessories without changing the spring preload.

The low profile of the machine has effects in the interior. The somewhat low and laid-back seats are firm and supportive. They have 6 inches of fore and aft adjustment. With tools, the seats can be lowered 2 inches, but even our drivers over 6 feet tall were not interested in lowering the seats.

The removable seat cushions are easy to clean. On our past X3s we had trouble adjusting the seats after the car got some time on it, but didn’t have that problem with our 2018 X3 Turbo. There is plenty of room for tall drivers, and we like the vertical passenger grab bars and angled footrests for the driver and passenger.

We spent time testing the X3 Turbo in the dunes, the desert and on rocky national forest trails. On most of the trips the 120-horsepower X3 Turbo was in the company of other turbo cars. To be fair, most were four-seat models, but we rarely noticed that 120 horsepower was an issue. For sure the car is easy to control, and you can keep your foot in the throttle without worrying about things getting out of hand. Handling and control are great on fast roads, washes and in the dunes. There is little body roll, and the car corners comfortably at speed.

You can push this car and its suspension hard when the terrain is rough and whooped. It stays calm and lets you worry about where you are heading. Keep things reasonable, and the car jumps easily and lands softly. We attempted to keep the landings on downslopes to give the suspension a fighting chance.

On the mountain trails and in rocks in the desert, the suspension feel is crisp and you feel the terrain surface. You can help by softening the shock compression and playing with tire pressure. While we were tackling technical trails, we noticed that the low seating makes cresting blind hills a thrill.

We did a lot of back-to-back comparisons with a Polaris Turbo Dynamix four-seater. During those comparisons we noticed that the X3 is geared lower in low range. For technical climbs, that was most welcome. The X3 picks its way easily up hills and through rocks. The combination of the low gearing in low range and the smooth build of power as the rpm rise make the X3 Turbo a pleasure in technical driving. The gearing is low enough that we always took the time to stop and shift back to high range for descending.

We dropped off large ledges and stair-stepped rocks, and even though the X3 looks a little low, we rarely had to utilize the plastic skid plate. When we did drag bottom, the slippery plastic skid plate let us slide right across and keep on going.

Can-Am’s decision to build a non-intercooled turbo model with less power has not changed the essential goodness of the X3 platform. There is good reason that the X3 line is selling so well. The generous wheelbase (for a two-seater) and long travel are a boon to the handling in the rough. Like all X3 models we have tested, the X3 Turbo craves speed. It works best when pushed, and that goes for both engine and suspension performance. This is an excellent value in a true performance platform. We prefer to search out trails that have a lot of twists and turns, and in those conditions this 120-horsepower-engine X3 package is fun and effective.

THE NEW SEPTEMBER ISSUE IS HERE!