Is it the new king of UTVs?

By the staff of Dirt Wheels, Photos by Pat Carrigan. 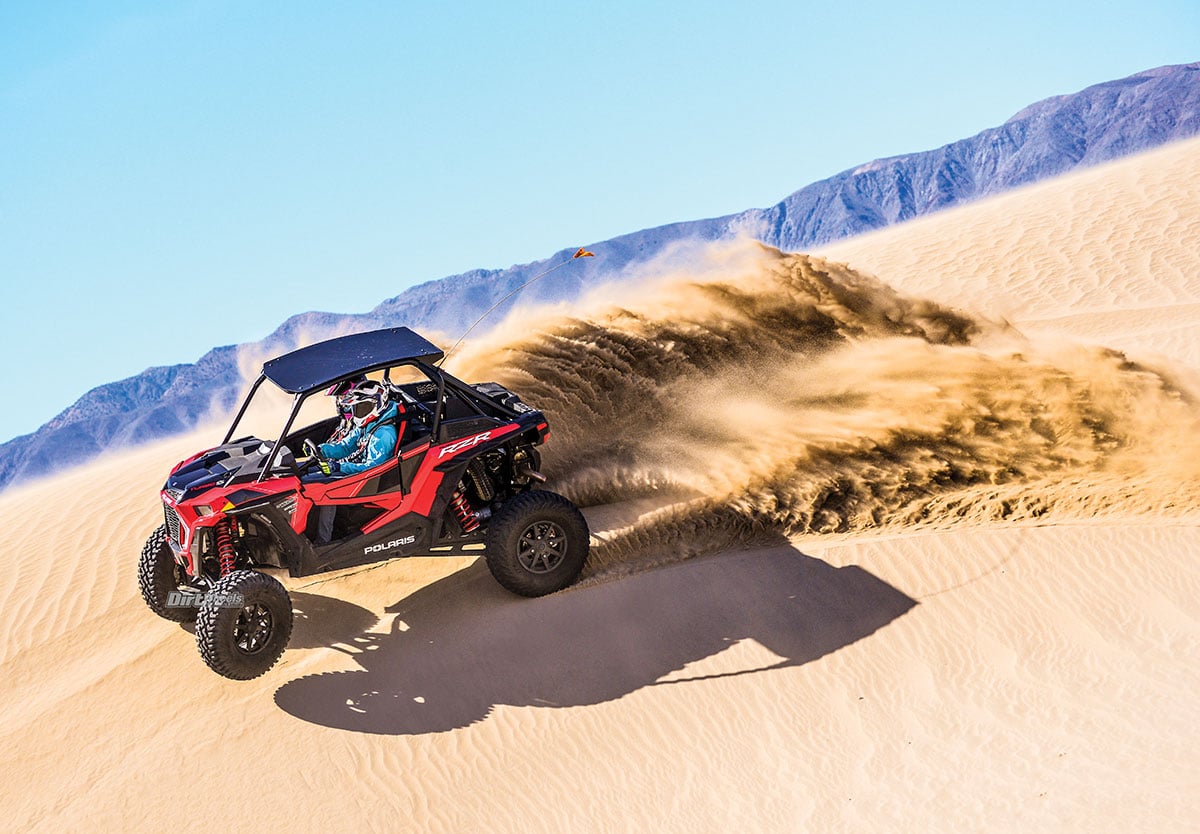 Polaris is coming up with some truly interesting and exceptional machines for 2018. The latest and most extreme in performance is the RZR XP Turbo S. It is a two-seat platform that looks like a redux of the classic RZR XP rolling chassis from the outside. This is a case of beauty being more than skin-deep. Beauty starts with stronger bones for the frame. Polaris says “all-new frame,” though existing bodywork appears to bolt up. As impressive as the styling changes, new front, and rear fascia, new dash layout, and the standard aluminum roof are, the S is all about the legs!

If you can peel your eyes away from those massive, industry-first ITP Coyote 32-inch tires and 15-inch wheels, you would notice that those massive meats are not even close to hidden under the body. Instead of the standard 64-inch width, the Turbo S is a full 72 inches wide. Changes to the width and suspension boosted the travel to 19 inches in the front and 21 inches in the rear.

Polaris is including a 25-inch front and rear “usable travel” number in addition to claimed wheel travel. Usable travel is measured from the skid plate to the bottom of the tires when the suspension is at full extension. Usable travel includes the actual wheel travel, tire compression, and chassis and suspension flex. Polaris is making the point that you still have frame/skid plate clearance when the car is fully bottomed out.

That usable travel number and the 16 inches of ground clearance do make a difference. On rocky, root-infested mountain trails, we crossed some amazing obstacles without touching a thing on the undercarriage.

Suspension goodness doesn’t stop with the numbers. Reinforced arched A-arms, radius rods, and trailing arms join with new, larger Fox 3.0 Internal Bypass Live Valve shocks that are part of Polaris’ Dynamix smart suspension system. The Dynamix Turbo came with 2.5 Fox shocks all around, and the S has those on the front but gets the new 3.0s in the rear. Dynamix machines combine the onboard GPS inputs from the Polaris Ride Command system with a special computer processing information from an accelerometer and a gyro to adjust the suspension on the fly.

There are three selectable levels via a rocker switch on the dashboard—comfort, sport, and firm. Firm is almost a Polaris inside joke. Firm maxes all of the suspension adjustments. In comfort and sport, you have a base setting—sport is roughly 30 percent more damping force than comfort—but over 20 mph, the computer senses the attitude of the car.

With each new Dynamix model, the quality of the active suspension gets better. As good as our Dynamix 4 is, the RZR XP Turbo S is orders of magnitude better. It is literally hard to believe the difference. The combination of the large rolling diameter of the tires, the massive shocks, and the active suspension yield a ride that makes the car feel like it is floating.

When you mash the throttle, whether you are turning or not, the rear of the car squats like a Trophy Truck. It hooks up hard and accelerates like crazy. Usually, you can’t use the throttle for long on trails, since something arrives that you need to slow down for. That is not the case with the S. There isn’t much that upsets the chassis at all. While testing in whoops, there was a sudden gully we thought might tear the front end off. We hardly felt it.

A section of 4×4 trail through trees in the mountains had impacts abrupt enough to disturb the suspension somewhat, but we had the normally calm and collected Dynamix 4 along. It felt like it was at its limits, whereas the S merely felt disturbed. Our first outing was in the sand dunes. In the dunes, the 32-inch desert eight-ply tires were merely okay. The Maxxis Bighorn 2.0 tires that came on our Dynamix were much better.

We would also have liked to try 30-inch tires at the dunes. It looked like there would be interference with 14-inch wheels. Clearance is snug, but you will be able to use your old sand paddles and wheels. Running 30-inch tires on trails will cause clearance issues. We were happy to find that the ITP Coyotes hook up very well in the desert and on trails with a firm surface. After 400 miles with close to two-thirds of those miles in rocks, the tires still look pretty good.

One thing about the Polaris 90-inch wheelbase is that the car is super nimble. It cuts and thrusts through terrain very well. We did find trails where the 72-inch width required heightened attention to your wheel placement. On that technical 4×4 trail, the width was an advantage at least half of the time. At other times the rocks, roots, or stumps were spaced just wrong. We could still drive quickly but took extra care to watch those tire sidewalls, especially since the spare on the Dynamix wouldn’t work on the S.

The only hitch in the handling—turns. The long, active suspension has a lot of movement, so it reacts best to smooth inputs that don’t suddenly load suspension. As we got more comfortable with the S, we could push it harder. The handling trait we had judged was quick steering started to affect how fast we could go in the rough. We suspected too much toe-in on the front wheels, but they measured out perfectly.

We will try adding some preload to the rear to keep the ride height up, but the Coyote tire has a fairly sharp edge rather than a rounded shape. It could be the tire shape is part of it. It isn’t a huge problem, but it was something we noticed.

No doubt the wider stance, longer travel, stronger frame, and larger tire all added to the cost of the machine, but they have another cost—the Turbo S is 218 pounds heavier than the 64-inch two-seat Dynamix. That is a greater difference than there is between the two-seat and four-seat Dynamix models.

A refined cockpit is another feature of the Turbo S. It has an entirely new dash, and it feels as if the steering column and the new flat-bottom Sparco steering wheel are mounted higher. We think that the seats—the same as current Polaris products but with a new cover—are mounted lower and leaned back a bit. The effect is a comfortable cab where everything is easy to reach.

Other RZR models have come with a retracting four-point seat-belt system, but the Turbo S comes stock with actual competition-type four-point harnesses. For those not used to them, they are time-consuming to adjust for a new driver or passenger, but the security is very nice.

We also found that many of the Ride Command features are nice. It is handy to have the GPS screen so easy to use. It is becoming second nature to set waypoints. Ride Command does have music and GoPro control capabilities, but you will need to add speakers for music and an antenna for radio reception.

We’ll need head-to-head testing to say for sure if the Turbo S is truly the new sport UTV king, but it is a formidable machine in any case. We haven’t driven anything that has such a smooth and supple ride. Add to that ride the typical Polaris Turbo motor addictive rush whenever you hit the throttle, and you have a machine that you can barely walk past without getting in for a ride.

This Turbo S costs $27,499. If you bought a cheaper RZR and spent the difference all on suspension and wheels, there is no way you get close to the stock performance of the RZR Turbo S. A Polaris Turbo may not get very good gas mileage, but it gets massive smiles per hour. What is that worth? Go to www.polaris.com to learn about their entire lineup! 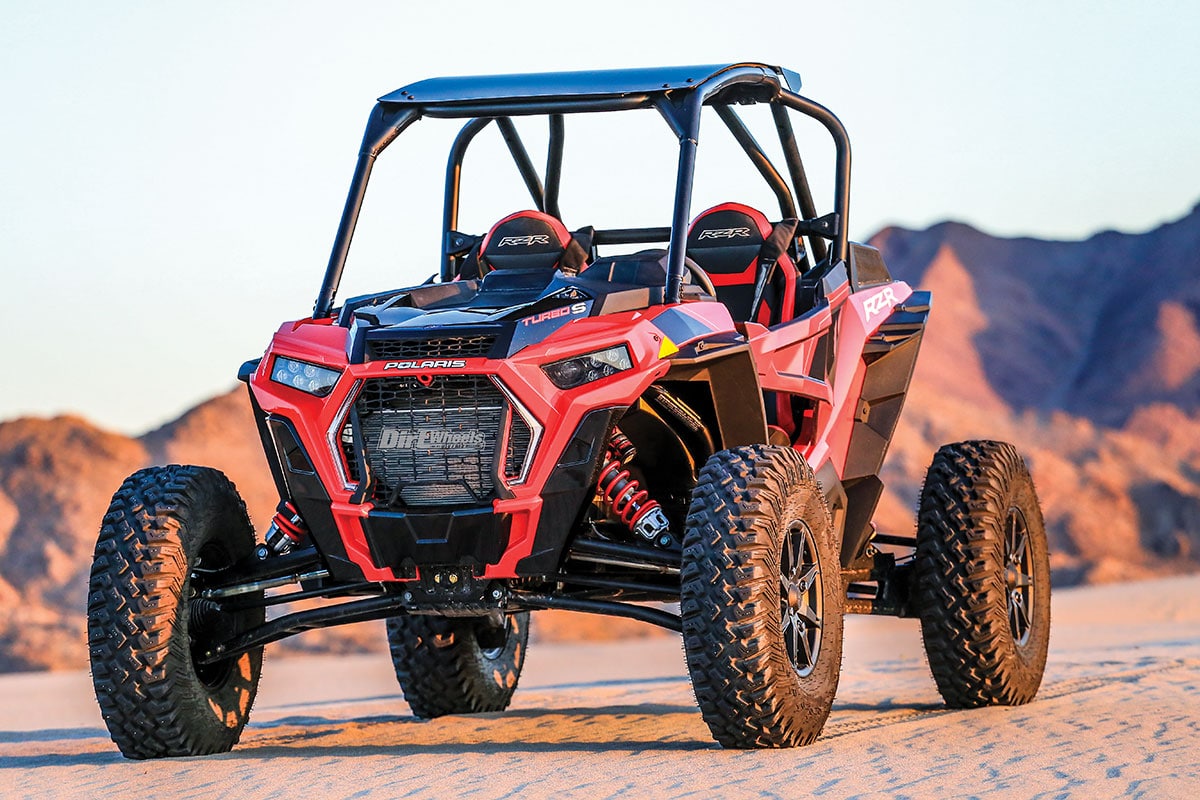