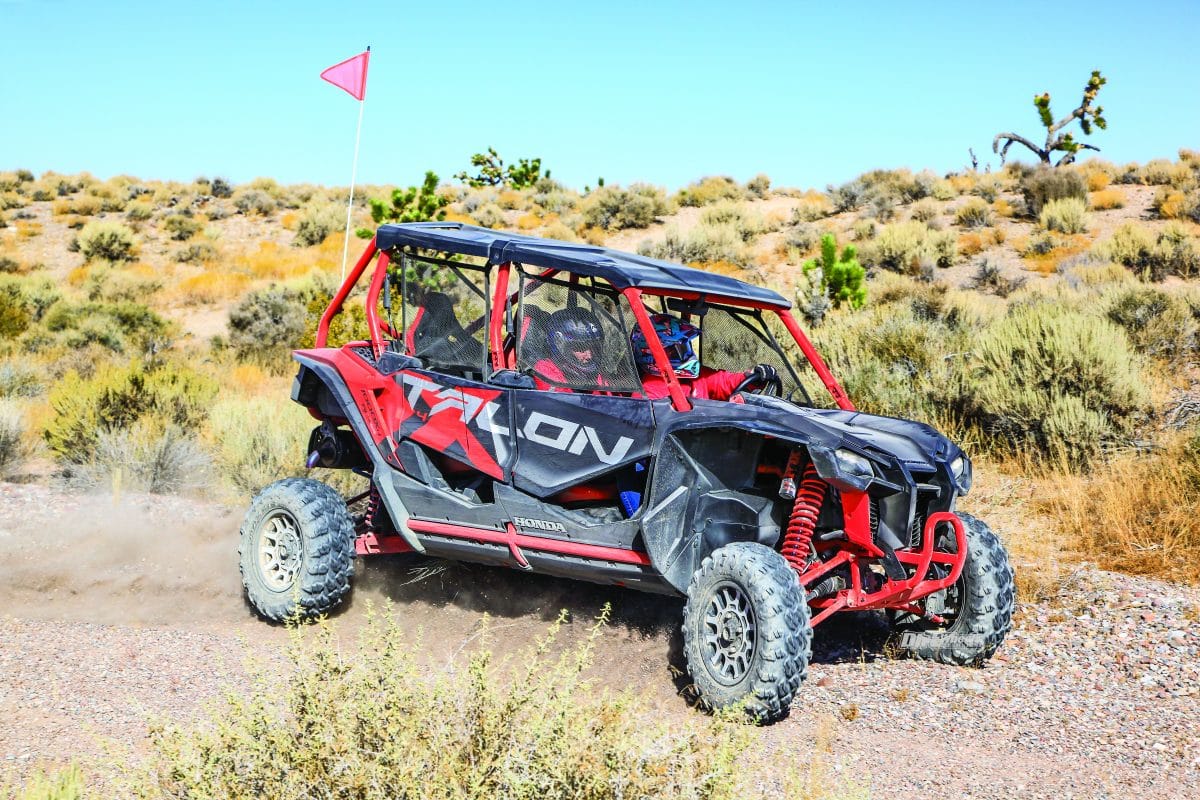 We were in the room when Honda announced the 2020 Talon 1000X-4 and Talon 1000X-4 Fox Live Valve to the dealer network. There was no mistaking the dealers’ excitement; however, our enthusiasm was somewhat tempered by the announcement that the 1000X-4 siblings would be based on the shorter-travel 64-inch Talon 1000X rather than the long-travel, wider Talon R.

A great percentage of long-wheelbase, four-seat sport UTVs are sold where driving conditions are more open, trail speeds are higher and long travel is highly sought after. Why not base it on the long-travel Talon 1000R?

Since the whole point of these machines is the back seats, it makes sense to start with the interior. In general, it is as nicely finished as you would expect from a Honda vehicle. The seats are comfortable and supportive. There are harness openings in the seatbacks, but the Talons have retractable three-point belts. We have mixed feelings about the window nets. You do feel safe with the window nets, but they reduce vision to the side.

Front entrance and egress are easy, and the legroom works for a driver over 6 feet tall. Honda made the rear door openings wide enough that passengers in winter gear fit through. Honda opted for a “stadium seating” layout that offsets the rear seats roughly 2 inches inboard and 3 inches higher than the front-seat mounting points. This gives rear-seat passengers a better view. We had four people in the machine for 95 percent of the time, and we can vouch for the rear seats. Passengers over 6 feet tall fit well. Tall passengers liked the greater reach to the floor. There is a full-length rear-grab bar with finger pinch guards. The rear drink holders, an accessory power socket, and inboard door handles are nice touches. The standard roof completely covers all four seats, and a front lip prevents water from pouring onto occupants.

The X-4 frames are 28.6 inches longer than the two-seat Talon’s but are still a one-piece construction. Honda claims they are “designed with optimal levels of stiffness and compliance to ensure consistent geometry.” We do know that the handling was consistent, with no apparent flex or odd traits, even with our full complement of passengers.

This wasn’t simply a case of transforming the Talon chassis into a four-seater. In the case of the Talon 1000X-4 Fox Live Valve, it introduced high-tech electronic suspension.

In a collaboration with Honda, Fox, and Bosch, Honda’s Talon 1000X-4 Fox Live Valve is its first off-road model with semi-active electronic suspension. The dedicated ECU crunches input from a multitude of sensors, including an IMU (inertial measurement unit), and the steering and brakes. Both of the brains of the system are from Bosch, and they adjust the four shocks 16 times per second. You can choose between normal and sport modes.

Honda claims that both Talon 4 models share 88 percent of their parts with the two-seat Talons. That shared parts list includes the entire drivetrain. In the Talon’s case, that means a 104-horsepower, 999cc parallel-twin engine paired with a six-speed Dual-Clutch transmission. Honda’s 270-degree firing angle has an authoritative staccato sound rather different from common 180-degree twin-cylinder firing angles.

Honda made these naturally aspirated power numbers with refined port shapes, 46mm throttle bodies, a cam with more lift and duration, and jets that spray cooling oil up under the pistons.

The Talon’s six-speed dual-clutch transmission sounds great going through the gears. It is literally a six-speed manual gearbox, but the Dual-Clutch System lets it shift like an auto. There are no belts to break, and you have options: run in two auto modes, shift for yourself, or use the paddle shifters to override the auto modes. Just because there is no belt doesn’t mean the transmission can’t break. It is possible to wear out clutches, wear gears or break transmission parts, but we haven’t heard of those issues being a problem.

Honda introduced the Talon 1000X-4 in a remote area of Nevada, and our loops were many rough miles from camp. Thankfully, we had confidence in the ability of the engine and transmission to get us back to camp.

Select the DCT’s normal automatic mode and it acts like a fully automatic transmission. In sport mode, the engine pulls longer in each gear before shifting. Manual mode isn’t actually fully manual. The DCT will downshift for you if the engine rpm drops too low, and it returns to first gear if you stop. Most of us preferred the manual mode or routinely overrode the auto modes with the paddle shifters.

Another plus is actual engine braking like a manual-shift four-stroke sport quad. A sub-transmission allows you to select between the high and low range. Another drivetrain feature is the hill-start technology that holds the car on a hill until you accelerate away.

Both Talons come with Honda’s unique I4WD the company developed to maximize wheel traction while avoiding the drawbacks of a locking front differential. I4WD is possible, thanks to Honda’s computerized smart braking system called the Brake Traction Control System (BTCS).

Unlike automotive ABS off-road, EBD is completely transparent in use. BTCS keeps braking power at the wheels in sync with available traction, but working with I4WD, it slows wheels that are spinning but also channels torque to the wheels with grip. The system measures the force required to stop the spinning wheel and routes four times that quantity of power to the wheel on the opposite side.

A locking diff is relatively simple compared to I4WD, but it does a great job maintaining traction while keeping the steering light and normal. You can switch between 2WD and I4WD on the fly.

We drove 50 miles in each machine over two days in the Nevada desert. We enjoyed the machines, the terrain, and in some cases the gold mining history of the area near Caliente. On the first day, we had a full car with all four seats occupied. Plus, we crammed photo and video equipment in as well. Truly, that is the essence of a four-seater: good times with friends or family. Each of our crew spent time in every seat.

Nevada’s desert is rarely without chunky rocks, ledges, pushy granular sand, and bushes that fight back. We started in the Talon 1000X-4. Engine and transmission performance was more than sufficient for the terrain despite the full load.

We were all comfortable in the cab, even when our 6-footer was reluctantly in a rear seat. There was some front push entering turns when the washes were two-tracked with ruts. Fortunately, we hit some of the same washes the next day with two people in the cars and the push was not an issue.

On both days, the X-4 transferred punishment to the passengers. As soon as we could stop, we set the Fox QS3 shocks to one, the lightest damping position. Comfort instantly improved significantly in the rocks. When the pace bumped up, we switched the shock settings and felt clear changes in action.

Honda’s Talon has calm and reliable handling and trail manners, but the added length of the four-seater jumps up the calm and stability in the fast and rough. This car is calm yet nimble. Sure, it sacrifices a bit in truly tight driving, but it still surprised us slipping through trees and rock formations. Filling all four seats (not surprisingly) challenged the suspension a little. We would add some preload to the rear if we planned on four people as a general rule.

Part of the handling and the ability to slide corners is likely thanks to the 28-inch tires on 15-inch wheels. Unfortunately, the tire just doesn’t leave much sidewall to add a cushion. On the other hand, there is little give to add wallow or a vague feel. While the tires are clearly a handling bonus, they don’t do the shocks any favors. We’ve driven two-seat Talons with taller tires, and the ride clearly improves. The trade-off is more caution required snapping into turns and ruts.

Speaking of improved ride, even without the benefit of taller tires, the Talon 1000X-4 Fox Live Valve version has it. Even if you get out and adjust the shocks on the standard model for every section, you still won’t find the comfort of the Live Valve.

Add in the fact that you can change the setting on the fly, and the Live Valve model is a clear advantage in any terrain. There may be a price difference of approximately $2000, but in our opinion, the Fox Live Valve system and the color combo are worth $4000. This is no gimmick; it is a significant performance advantage.

The ride is smoother on small bumps and particularly in rocks, but at the same time, it excels in the fast rough. It offered the same handling excellence and interior comfort as the X-4, but we had big smiles when it was time for the Live Valve cars.

If money is really a problem, or you are just disgusted with the way computers are taking over our lives, we’d say go Live. But, with either machine, you (and up to three others) are bound to have some real adventures.