It changed from Bad Boy to Textron during our test 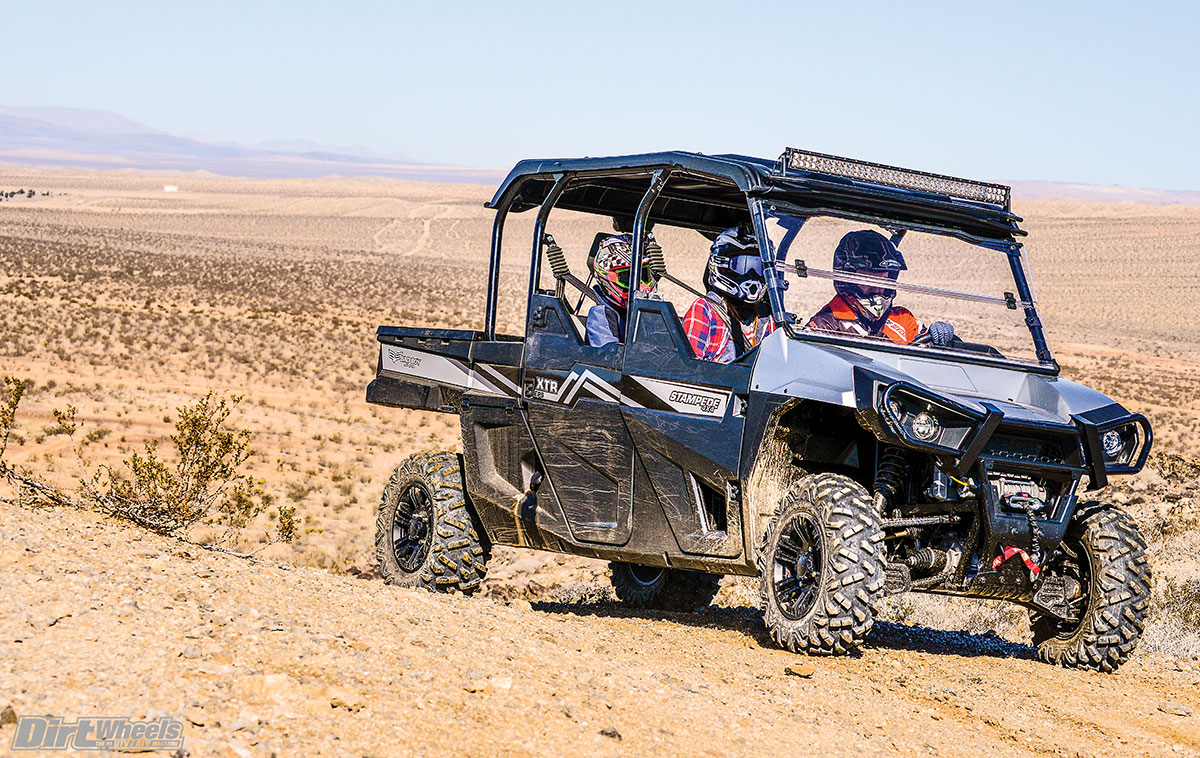 Even though the Bad Boy XTR is essentially a utility machine, the combination of cab comfort, plush suspension and a great motor prompted us to take it out for sport driving as well.

After years making specialized electric off-road utility and hunting UTVs, Bad Boy jumped right into deep water with the 2016 Stampede internal combustion UTV. It was a masterful first effort, and one that we truly enjoyed driving. Even though the Stampede is aimed at the utility market, it is certainly on the sporty side of utility, so much so that we took the Stampede to the dunes twice. It was plenty of fun when pressed into “sport” duties. For the rest of its time with us it was a serious work vehicle, hauling loads as light as cameras and as heavy as dirt and trash, and a drag used to smooth roads and dirt pads. No matter what was asked of it, the Stampede did it well. Before the year was even out, Bad Boy announced a crew version, and folks from the company were pumped with the ride quality and fun factor of the longer, heavier machine. We immediately asked for the top-of-the-line 2017 Stampede XTR EPS+.

Bad Boy is part of the Textron family, a Fortune 500 company known for Cushman industrial vehicles, Cessna aircraft, Bell helicopters and Greenlee tools. This group of companies once included Polaris but was sold off in 1981. During our testing it was announced that Textron acquired Arctic Cat. Then, as we were wrapping up the test, we were informed that Arctic Cat UTVs, ATVs and Bad Boy would all soon be going by the Textron name.

Each of the Bad Boy models has a somewhat unique profile, since the design includes an extra-cab, 30-liter storage area between the cab and the bed. Basically, you can store a cooler or tools in the extra cab area without taking up any room in the dump bed. We love the convenience, but it makes for a long machine. For example, a Honda Pioneer 1000 five-seater has an 80.2-inch wheelbase, while the two-seater Stampede is 85 inches. Now add the room for an extra row of seating to get the XTR model and the wheelbase grows to a limo-like 117.2 inches! To be fair, though, remember that the Pioneer has almost no cargo capacity with the rear seats flipped up, so it would be shorter.

The added wheelbase supplies a welcome calm to the suspension action, and as long as speeds are kept in check, the roughly 10 inches of travel does a great job on rough terrain. Even though the shocks have only five-position-adjustable preload and no reservoirs, the XTR copes extremely well with a single large hit, but as expected for a sporty utility machine, it doesn’t deal as well with repeated large bumps. Chop is handled fine, and hacked-up, rock-littered trails are about what you would expect the XTR to face and it handles that well. We dropped air pressure to 6 psi for rock-corrugated crawling and barely felt any feedback from the trail surface. Just don’t go looking for whoop sections.

Bad Boy couldn’t find a supplier for an engine that met their needs, so it purchased a German engine company and had one built. It is a wonderfully smooth-running engine in terms of vibration and its response to throttle inputs. We found there was some engine noise that made its way into the Stampede’s single cab, but with the engine farther back in the chassis, it was far less in the XTR—at least for those in the front seats. All four doors are tall with the handles only on the inside, and the doors add to the secure feel of the cab, and the same is true of the optional full-coverage roof. There are cup holders in the front and rear, and the contoured bench seats offer a nice cab experience for work or play.

Bad Boy kept the controls on the Stampede clean and simple. There are a few rocker switches. Two are on the left side of the steering wheel. One toggles between 2WD and AWD, and the other selects rear-diff status. The choices are 2WD in the rear or a turf mode where there is power to only one rear wheel. The latter allows the Stampede to turn on cement without leaving tire tracks and to drive on grass without tearing it up. On the center dash are more rockers to control lighting and the optional winch.

The main control is a dash-mounted shifter with park at the bottom. You shift up for reverse, neutral, low and high. You will probably reserve low range for rock crawling, and we used it while towing a drag to make life easier for the belt. Overall, the gearing in high range is fairly low, and the Stampede climbed well. At times we selected low range when high would have been fine, but low added throttle control when we climbed rough and rocky slopes. Since the XTR is heavier, we did find that we used low range more than we did with the 2016 two-seater.

There is a control on the dash that looks something like an automotive mirror control, but it manages a diagnostic screen that will tell you the condition of various aspects of the machine. The screen also displays the dash readout, and we found the display easy to read, with all the information we needed handy.

Our 2016 Bad Boy Stampede was a midrange model with stamped-steel wheels and 26-inch tires. As noted, our 2017 XTR EPS+ is top-of-the-line. Key differences are cast-aluminum wheels and 27-inch Maxxis Bighorn 2.0 tires. The wheels add a rich look to the machine, but the tires are a nice upgrade in both feel and handling. We ran pressure between 6 and 15 psi. Comfort was best at the lower pressure ranges, but the handling and chassis response were best at 15 psi. Our machine was also kitted out with a roof, folding windshield, a huge curved LED light bar and a Warn winch with a synthetic rope.

We experienced weather (unusual for SoCal) that was both cold and wet, and the roof and windshield were both extremely welcome. When you fold the accessory windshield, it converts to a half windshield, and we initially believed we would use it folded most of the time, but we left it up most of the time. It does get dusty, but the fenders on the XTR do such a good job that it never got muddy.

We spent time in sand, on packed trails and roads, and even hit some extreme rocky areas. In all cases the XTR worked well. Our experience with crew-cab UTVs has been that they have improved ride comfort. They are not as happy sliding corners as two-seat units, and we find ground clearance a compromise.

Usually, what you give up in over-obstacle clearance you gain in the ability to stretch between points. In the case of the XTR, we definitely had to watch the clearance-crossing berms and sharp rises. We used the XTR skid plates far more than we banged the two-seat Stampede’s undercarriage. Nevertheless, it shrugged off the abuse.

You do feel the difference in weight. It softens the acceleration feel a bit. Still, the 80-horsepower engine is more than capable thanks to intelligent gearing. Even with the taller tires the XTR climbs very well in high range and great in low range. Compared to other brands with CVTs, the XTR reacts to throttle inputs with greater smoothness and control with minimal lunge or snatch to the initial throttle, and it builds power quickly and smoothly without hitches or jumps in the torque curve.

This is a long machine, and it looks it, but in spite of the ample cab room, the handy extra cab area and the capacious dump bed, the XTR EPS+ remains an attractive machine. It looks good, is easy to keep clean and remains looking nice after use. All of the options that Bad Boy added to our machine are most welcome as well. For us, the roof and windshield are almost a must. It was comforting knowing that we had the winch, and we did put it to use on several occasions. We carried heavy loads of both passengers and cargo, and towed as well, and the XTR was up to every task. The drag we use is tougher to pull than a trailer. It was pulling sand and dirt the whole time, where a trailer rolls easily at times.

While we are less inclined to use the XTR for, say, playing in sand dunes, it is more appropriate for work, camping or exploring.