We now have a good deal of time in all of the Honda Talon models, and that includes the Talon R with the Jackson Racing turbo kit installed. Of all the Talon models, the Talon 1000X-4 Fox Live Valve is our favorite model to drive, and we like the look and color scheme as well. This was also our first time to keep this model of the Talon, and we got to use it on our favorite trails and live with it for a while.

You might think that the entire point of a four-seat machine is the interior space. It is as finely finished as we expect from Honda vehicles. The seats are comfortable and supportive. There are harness openings in the seat backs, but the Talons have retractable three-point belts. The window nets allow us to feel safe with only three-point belts, but they reduce vision to the side.

Both front and rear seats are easy to enter or exit, and even for folks over 6 feet tall. Honda opted for stadium seating that offsets the rear seats roughly 2 inches inboard and 3 inches higher than the front-seat mounting points. That gives rear-seat passengers improved vision forward, but our tall riders would have preferred the Honda front seats be mounted a bit higher off the floorboards. Tall passengers liked the greater reach to the floor in the rear seats. There is a full-length grab bar with finger pinch guards in the rear. Rear drink holders, an accessory power socket and inboard door handles are nice touches. The stock roof fully covers all four seats, and a front lip restricts water from pouring into the cabin through the front window opening.

The Talon X-4 frames are 28.6 inches longer than the two-seat Talon but are constructed in one piece. We know that the handling is consistent with no apparent flex or odd traits, even with a full complement of passengers.

For our western driving conditions, we almost always prefer the long wheelbase of a four-seat machine. Even though we rarely fill all four seats with people, it is nice to have the option. With less than four occupants, we like the option of carrying our support equipment in the rear seat area. Finally, the long chassis helps the suspension in the rough, and the car feels safer and more planted on steep drops or climbs.

In a collaboration between Honda, Fox and Bosch, Honda’s Talon 1000X-4 Fox Live Valve was Honda’s first off-road model with semi-active electronic suspension. The suspension has its own Electronic Control Unit (ECU), but it also uses data from the engine-management ECU to help with suspension setting. There is also an inertial measurement unit (IMU) and steering and brake sensors. Both the ECU and IMU are from Bosch, and they adjust each shock 16 times per second. A switch inside the car selects between Normal and Sport modes.

Honda’s Live Valve setup differs from that of other brands. Honda has two switchable in-car settings instead of three, and is active at all speeds rather than waiting for 20 mph. Honda’s Fox Live Valve shock bodies measure 2.5 inches and are fitted with dual-rate springs. Talon X-4 models are heavier than Talon two-seaters, so they have stiffer springs, but the Fox Live Valve versions are able use softer springs thanks to more sophisticated damping control.

In the world of UTVs, the Honda Talon drivetrain is more unique than the suspension. A 104-horsepower, 999cc parallel-twin engine is paired with a motorcycle-style six-speed Dual-Clutch transmission. Honda uses a version of this engine in the Pioneer UTV and the Africa Twin adventure motorcycle, but the Talon version is the most powerful. Honda boosted the power via refined port shapes, 46mm throttle bodies, and a cam with more lift and duration. For reliability, the Talon engine has jets that spray oil up under the pistons for cooling.

No UTV sounds like the Honda Twin accelerating through all six gears. It is a six-speed manual gearbox, but the Dual-Clutch system lets it shift like an auto. Select the DCT’s normal automatic mode and it acts like a fully automatic trans. In Sport mode the engine pulls longer in each gear before shifting.

You have the choice of two auto modes, though you may use the paddle shifters to override the shifting. We typically upshift on descents for less engine braking, but downshift for some corner entrances to get more instant drive out of the turn. You may select a manual mode where nearly all shifting is by the paddle shifters. We say “almost,” because the computer will not allow the engine to stall. It will force a downshift. When you stop, the car shifts to low automatically, even if you are in manual mode.

It is possible to wear out clutches, wear gears or break transmission parts, but we haven’t heard of those issues being a significant problem.

You get positive engine braking that is as effective as that of a manual-shift four-stroke sport quad. A sub-transmission allows you to select between high and low range. Having a full six speeds in low range is a great feature. The Talon has a lot of speed flexibility in low that CVT cars typically don’t have. Other drivetrain features are a hill-start feature that holds the car on a hill until you accelerate away.

Talons are equipped with Honda’s unique I4WD. It was developed to bypass the drawbacks of a locking front differential while maximizing traction. I4WD uses braking to slow wheels that are off the ground or spinning in mud or sand, so it requires Honda’s computerized smart braking system called Brake Traction Control System (BTCS). BTCS keeps braking power in step with traction. I4WD routes torque to wheels that have traction. I4WD measures the force required to stop the spinning wheel, and routes four times that amount of drive to the wheel on the opposite side.

Unlike a locking differential, I4WD does a fine job maximizing traction yet keeping the steering light and normal. You can switch between 2WD and I4WD on the fly.

While we had our Talon we sampled a variety of riding areas, but all are ones that we travel to regularly. Much of the time we had no passengers or just a single passenger. We also had all four seats filled. Surprisingly, the engine and suspension performance remain consistent regardless. Some of the areas were soft and sandy without many rocks, but with a fair number of whoops and G-out gullies.

Other areas were tight and rocky with ruts and chop but not many whoops. One of those rocky areas is where we did a lot of testing on the Talon 1000X-4 with the QS3 shocks. Having the Fox Live Valve shocks provides a much higher level of comfort and a smoother ride quality than the standard Talon 1000X-4. Despite the improvement, the suspension action remains crisp and the passengers feel the terrain.

It is apparent that Honda valued outright performance and control when pushing the Talon hard over maximizing a comfortable ride. Considering the amount of travel, the Talon is surprisingly well-suspended. Overall travel is roughly the same as the Polaris General XP or the Yamaha RMAX4. Both are smoother on choppy terrain, but can’t approach the Talon in whoops or in high-speed rough terrain.

We spent virtually all of our time in the Normal setting. That was always stiff enough for our tastes. When the pace bumps up, the car rides better and feels more composed.

Partially thanks to the long wheelbase, the Talon has calm and consistent handling. Steering is light, and it tracks well. All Honda Talons are brilliant in rutted turns. They show little tendency to lift the inside wheels while cornering hard. We believe that the relatively low center of gravity and the somewhat short sidewall of the Maxxis tires also play a part.

We generally avoid sliding a UTV much, but if the Talon hangs the rear out a bit, there is no cause for alarm. We got into some tight trails, and we did experience some front-wheel push, and we had to three-point turn a few tight switchbacks. In spite of that, we remain fans of the longer machine, and found the benefits of the length worth the cost.

While the short sidewalls of the tires are an aid to cornering and handling, they don’t add much comfort to the ride. Taller tires have aided the ride when we tried them, but you do need to have care flicking the car into rutted turns.

If we were looking at a Talon, we would absolutely invest the added money required for the Fox Live Valve suspension. No matter how frequently you make suspension adjustments on the standard Fox QS3 shocks, you won’t match the ride of the Live Valve.

Honda claims that the DCT is more efficient in transferring power than a CVT, and we felt that in terms of performance. The Talon feels strong for a normally aspirated machine. It also gets excellent fuel economy. We had a 65-mile loop that required constant high-speed running for 30 minutes at a time, followed by much tighter conditions and a lot of climbing to over 6000 feet. Engine performance and response remained strong.

The Talon X-4 accelerates with authority. It gets to 60 mph in a hurry, so we felt it would have a massive top-end number, but it is limited at an indicated 72 mph.

At the same time, when the going gets very tough, low range feels a little tall in first gear. As much as we’d like taller tires, we wouldn’t go over 30-inch tires for our type of driving. That would boost actual top speed (but not indicated) a bit without hurting the low range.

With some machines, the choice to spend a little extra to get a lot is easy to justify. If you are looking at a Talon, get the Live Valve version. For the Talon 1000X-4, it is clearly worth the cost. 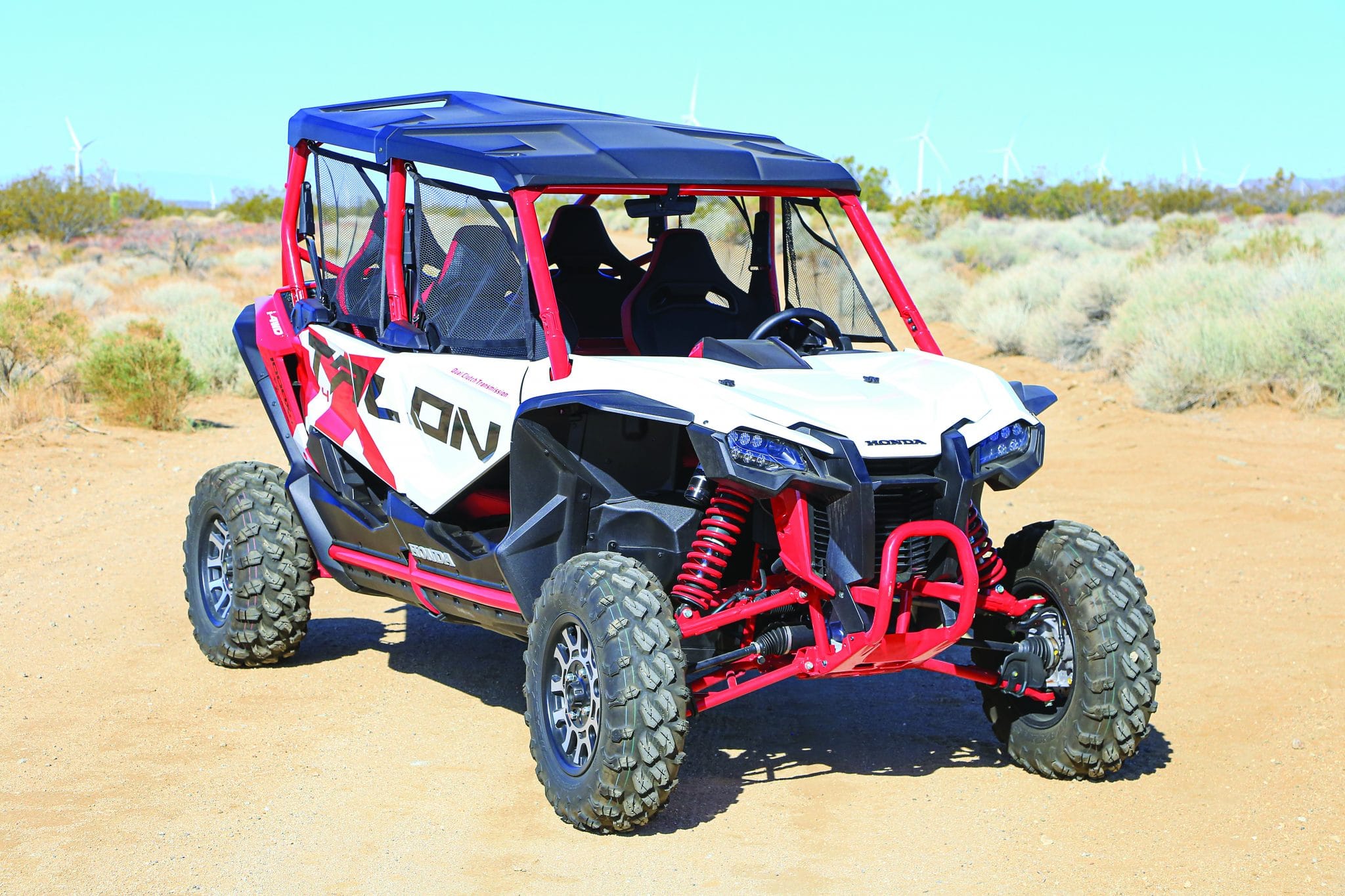