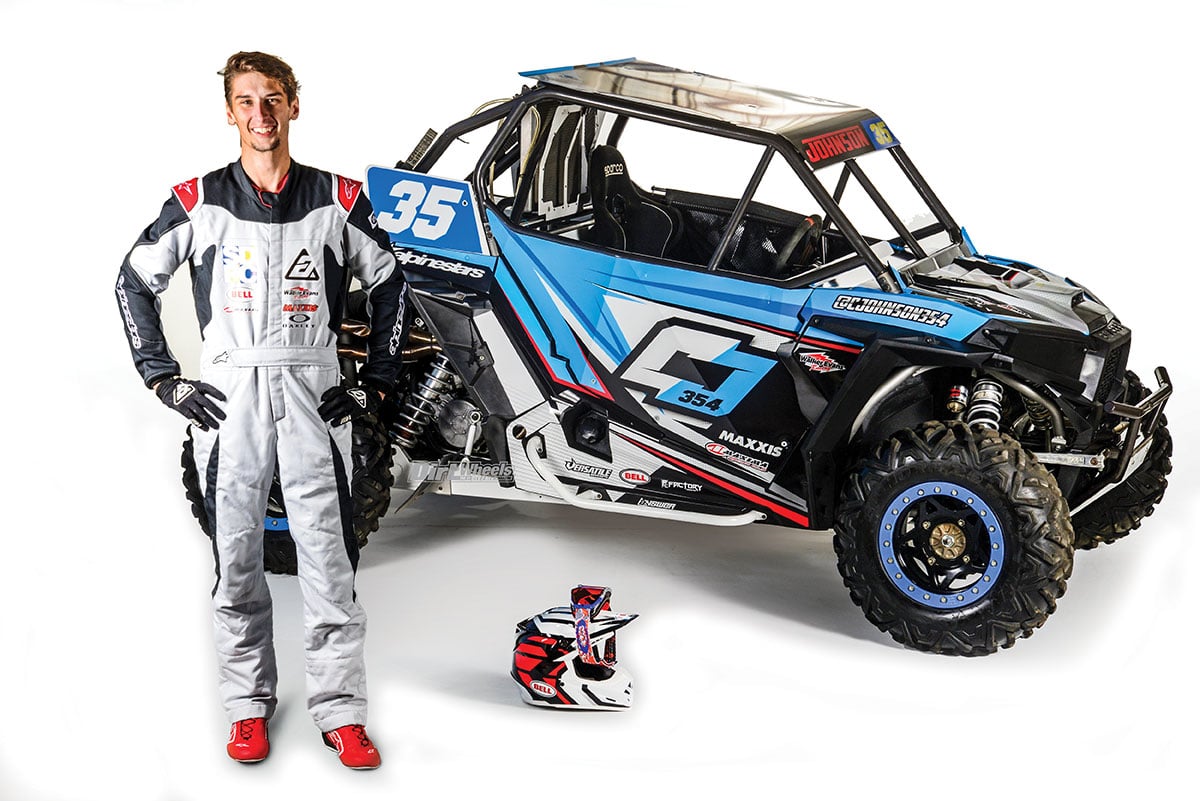 UTV racing is a melting pot of immigrants. The whole sport consists of drivers who came from Somewhere Else. Some are ATV riders, some are buggy drivers and some come from the motorcycle world. A sport that’s scarcely a decade old is unlikely to have its own natives. Even those who have been in it since the start have seen such a tidal wave of change that it’s essentially a new sport today.

The interesting part is that there’s no guaranteed path to success. Each discipline brings its own strengths and weaknesses, and we’ve seen champions come from every background you can think of. Chris Johnson is an example of a motorcycle immigrant. He’s currently racing a RZR in the WORCS Pro Stock and Production classes. Five years ago he was racing the Monster Energy Supercross series on a motorcycle for Cycle Trader. Before that he was racing outdoor motocross and the WORCS motorcycle Pro class. Few racers have such a diverse resume. I got together with Chris to find out what he’s learned so far in his transition to four wheels. He gave me his top nine hit list.

Learn patience. “In Supercross, you have to make things happen right now. You have to develop instinct and seize opportunities that might develop in a fraction of a second. One of the most important things I had to learn in a car was to slow down, be smooth and think things out. When you rush into something, it generally doesn’t come out well.”

Save the car. “When I first started racing cars, I broke down all the time. I thought I just had to build the car stronger, but it’s more important to drive with finishing the race in mind. It’s almost impossible to hurt a motocross bike by riding it too hard. They can take anything you can dish out. A UTV isn’t like that—not yet, anyway. You have to choose when and where you gas it, and you have to get on the gas and the brakes smoothly.”

It’s all about line choice. “This is one area where my background in motorcycle racing helped, but not the way you might think. WORCS courses are pretty narrow, and you generally have to fall into the main line. But just a few inches in either direction can make a big difference. I think my background in motorcycle racing has taught me how to read terrain and dirt texture. I can’t take radically different lines, but I can place my wheels in areas that might give me a better drive and set me up for the next turn.”

Don’t worry about how fast the car is. “Right now I think top UTVs are plenty fast. You really don’t need to find more power. Getting the chassis, clutch, tires and suspension right is worth so much more. When I first started, I thought my car was pretty good. It was fast, and I thought I already knew something about suspension. It turned out, I didn’t know anything. I got a car from RJ Anderson that was really set up properly, and the difference was incredible.”

Trust the car. “Once a modern UTV is set up, it can do some pretty amazing things. But, you have to commit early and see it through. Don’t chop the throttle when things get ugly; that’s just when it really gets interesting.”

Don’t be afraid of contact. “To confess, I think I got this right away. I was really aggressive right off the bat, and I think I wasn’t making many friends. In Supercross, there’s a lot of bumping that goes on, and you can get away with so much more in a car. By the same token, you have to be smart. Once I lost my cool and hit a rider square from behind. We got hooked! We both lost time trying to pull our cars apart.”

Confidence vs. experience. “When I started, I thought I was much better than I was. In my first race they walked away from me. It would have been easy to quit. I stuck with it until I earned the right to be confident, and now I feel I can run up front. Once you’ve proven yourself, other drivers are less likely to deliberately hold you back.”

Push your limits. “I’ve rolled over many, many times. It’s not the end of the world. In WORCS, there are usually course workers who can set you back on your wheels. There’s a rule stating that if you don’t get out of the car while someone else pushes you upright, you get a 30-second penalty. That could cost you a couple of places in the end, but I’ve learned that getting out of the car can cost you more time, even though you don’t incur the penalty.”

Keep learning. “Everything is changing and evolving. What works well this season might not work next year. That’s one of the things I love about this sport. Nothing is a sure thing.”

CONVERTING A QUAD INTO A SNOWMOBILE

The Heat of WORCS Racing Round 6!