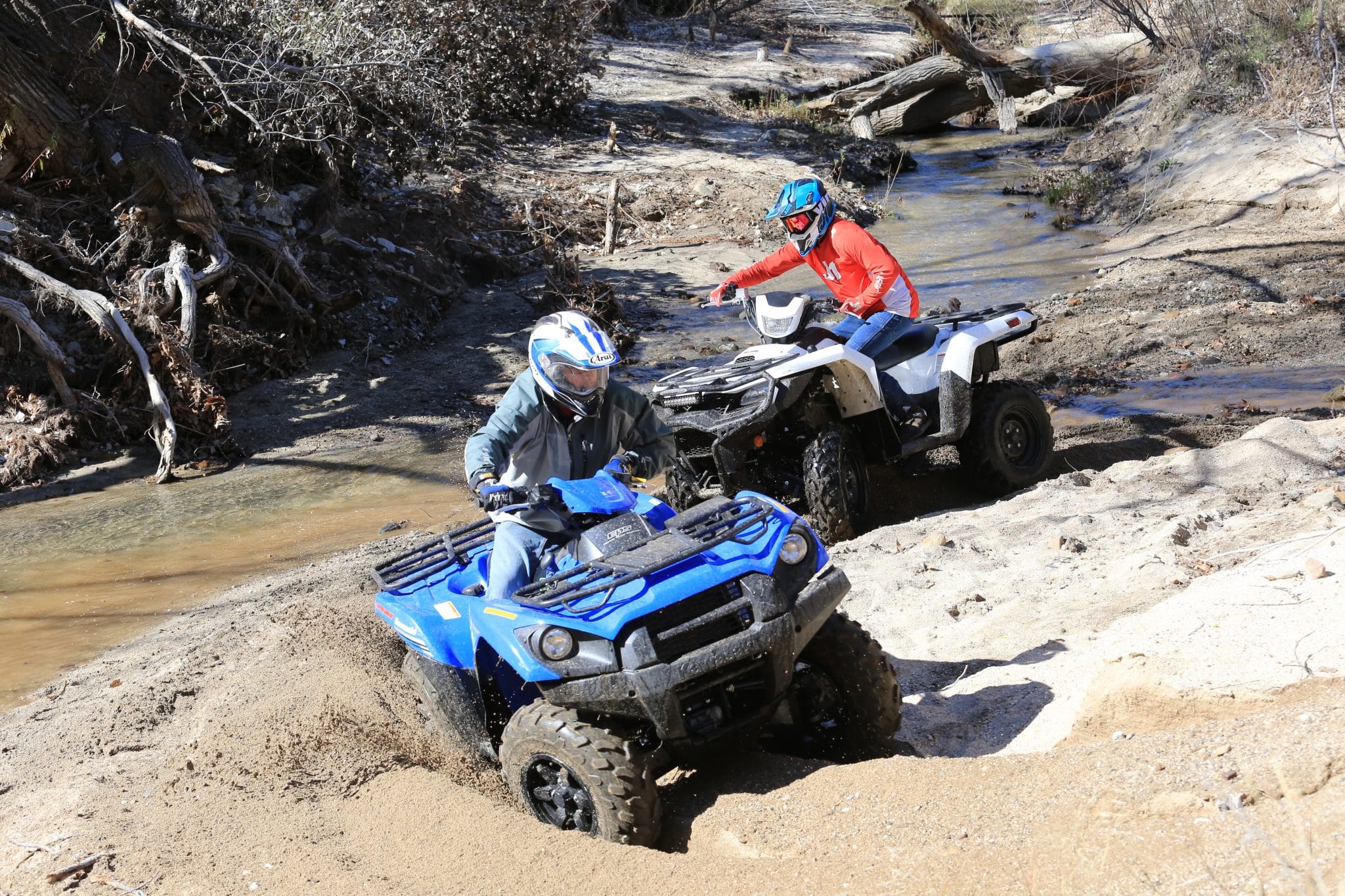 Marketing surveys say the type of quad you’re riding right now is the type you’ll be looking for when you get your next one. Most likely you’ll be after something newer and more powerful, but you’ll stick to the ATV category you have right now. Nobody knows exactly how many millions of dollars it cost to reach that conclusion, but I would have gladly provided the same information for free with any donation of 5 million dollars or more. Really, how many surveys do you need to sift through to reveal the obvious, that human beings are creatures of habit? We like what’s familiar, what we feel comfortable with, and we tend to stick with it. I’m not trying to change you. Stay with what you like, but for crying out loud, at least make an effort to ride every kind of quad before you can’t squeeze a throttle anymore. Here’s a taste of what you’re missing.

If you’re a sport quad rider, try a modern utility 4×4, like a Kawasaki Brute Force 750 or a Yamaha Grizzly 700. You’ll find they’re really sport utility machines. Sport quads are great, but if you think 4x4s are slow, poor-handling beasts, you haven’t ridden a recent, decent 4×4. Way back when, utility quads really were pure utility machines, and folks from every walk of life found ways where ATVs could help them with their work. People had fun taking them hunting, fishing and camping from their farms and ranches, too, but it was pretty low-speed fun compared to what 4x4s are capable of today. Current 4x4s are available with power and suspension that can earn the respect of the most serious sport riders. The fastest 4x4s are true muscle quads, a class of machines that didn’t even exist in the early days of utility ATVs. These four-wheelers can wheelie and do dramatic dirt-throwing power slides like a world rally car. Then, they can plunge into a mud pit or river for an afternoon of mudding fun you just can’t experience on the hottest sport machines. Do you really want to miss out on all that?

The sport performance of many 4×4 utility machines is surprising, but the sport-riding potential of sport 4x4s like Polaris Scrambler XP 1000 S, Sportsman XP 1000 S or Can-Am Renegade X xc is completely astounding. The 55-inch-wide Polaris machines offer a level of stability and control that has to be felt to be believed. Can-Am’s Renegade Sport 4x4s, especially the 91-horsepower 1000s, will impress anyone who loves performance, no matter what they ride. 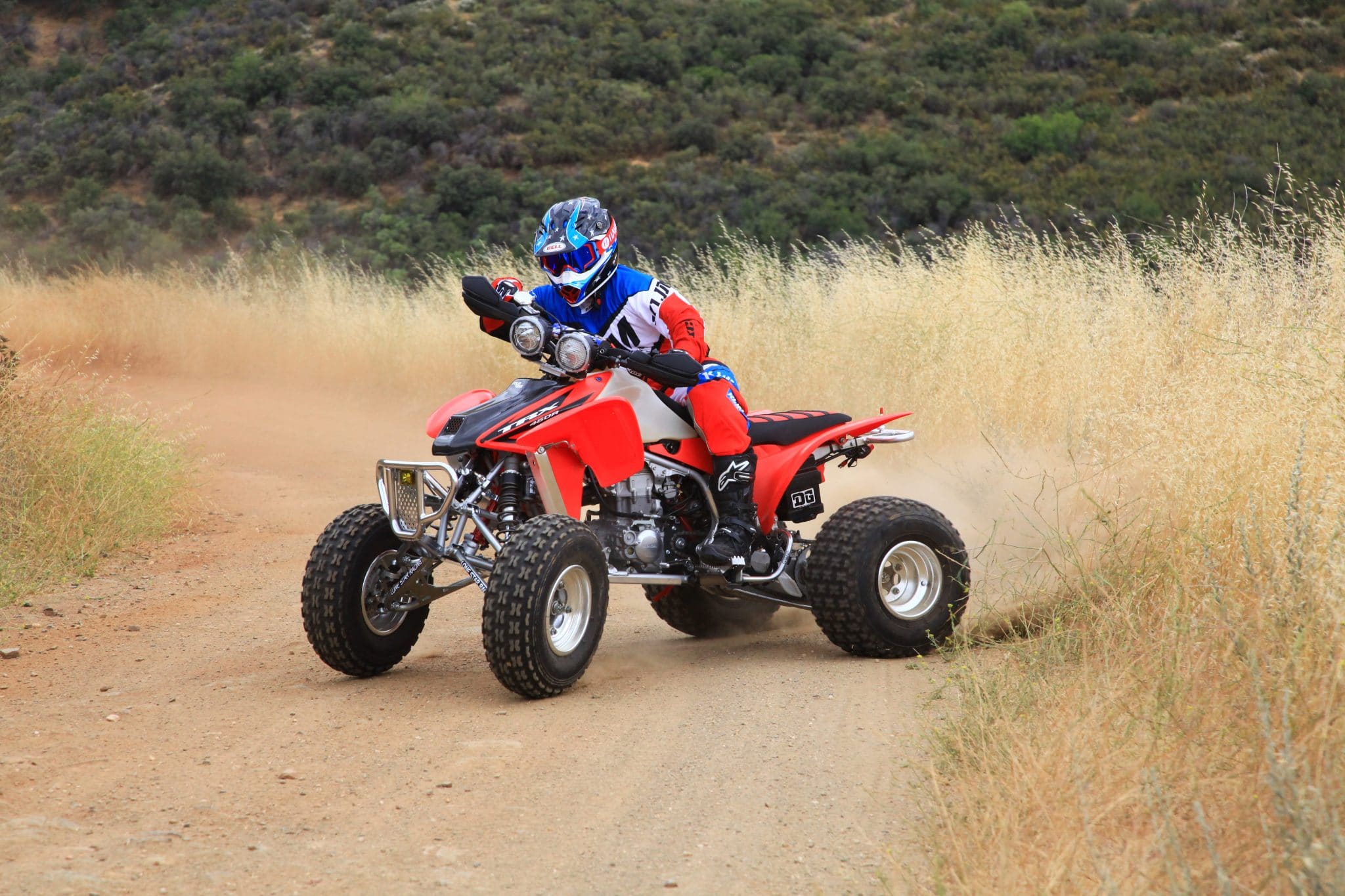 If 4x4s are all you ride, you need to get your hands on a current sport quad. I’ve heard all the excuses, so don’t tell me you’re too big, too old or too busy to be playing around. Think you’ll look like you don’t belong on a high-performance quad because you’re not a 19-year-old racer in new gear? The greatest thing about ATVers is that they are a come-as-you-are crowd. Ride what you like, wear what you want and just have fun. The point is, the feel of the lightest, fastest machines made has universal appeal to everybody who appreciates performance. I’ve seen people who barely knew what an ATV was get hooked with one run through the gears on a high-performance 450.

No matter what you ride, find a way to hit your favorite trails on a two-wheel-drive sport utility machine. If you think these simple, basic quads lack what you crave, I think there’s a good chance they could surprise you as much as the hottest 4x4s and high-performance sport machines. More than any other class of quads, these vehicles always do more than I expect, so they deliver more fun per mile and more fun per dollar than machines with impressive credentials and big price tags—and fun is what we all ride for, right? Want to really shut your riding buddies’ mouths? Smoke them on a trail ride on a bare-bones 2WD machine that costs half the price of their trick 4x4s. Two-wheel drives give you that great, basic rider-and-machine connection that made ATVs so popular in the first place. They have enough power to go almost anywhere, but they’re not overpowered, so you have a sense of mastering the machine that you don’t get with faster four-wheelers. They’re big enough to be comfortable, but they’re built on a human scale, unlike many big 4x4s, so you can lift or push them out of tough places when you’re stuck.

I’m not saying youth quads are the smartest choice for full-grown riders, but you haven’t had every kind of fun you can have on ATVs until you get into a backyard battle with your buddies on 90s or the coolest kids’ quad ever, the Raptor 125. The Raptor 125 was discontinued years ago, but don’t pass up a chance to ride one if you see one. You’ll probably have to cut some kind of deal to borrow a kid’s mini, so plan ahead. Kids are crafty. Agree to something good, like some new goggles or taking them riding, but don’t let them talk you into letting them ride your machine until they’re old enough and skilled enough to handle it.

That’s it for the lecture. The bottom line is, ride every kind of quad out there. I know people aren’t lining up to lend you their quads, but until you get to try every kind, you can read about what they’re like in Dirt Wheels.

4 Ways to Customize Your ATV