It only took us a few minutes to be convinced that electric power steering (EPS) on the Yamaha Grizzly was a game changer back in 2007. So we like the idea of adding a smaller version or this new motorcycle EPS on the Raptor 700 or YFZ450 sport. To us, it looks like another game changer and a possible way to bring new life into the sport quad segment. Yamaha recently announced that it will be using a prototype system on the all Japanese MX Championships and divulged more about the technology. See the rest of the announcement below.

Yamaha Motor Co., Ltd. announced that it has announced a newly developed prototype of the EPS (Electric Power Steering) steering support system for motorcycles as a new rider aid contributing to improved motorcycle stability and agility. In order to further expedite its R&D, the Company will enter racebikes equipped with the system in this season’s All Japan Motocross Championship.

The newly developed EPS is a technology falling under the Transforming Mobility (transform mobility to expand human possibilities) focus area of the Company’s Long-Term Vision of ART for Human Possibilities. Yamaha Motor is carrying out development of the system seeing it as a technology not only for transforming mobility for greater fun, safety, and comfort but also as one connected to resolving societal issues in uniquely Yamaha ways.

The EPS steering support system employs sensor technologies that differ from those in power steering systems for automobiles and other four-wheeled vehicles. Utilizing a magnetostrictive torque sensor enables the system to function as a steering damper and provide assisted steering, thereby contributing to a motorcycle’s stability, improving agility, reducing rider fatigue, and more. 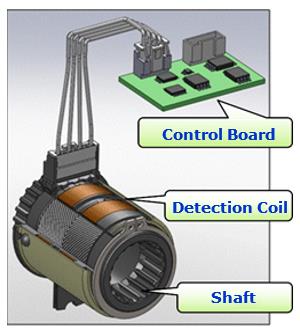 Yamaha Motor aims to equip EPS on various motorcycles in order to provide a wide range of riders with greater motorcycling fun, safety, and comfort.

Furthermore, the Yamaha Factory Racing Team will contest the All Japan Motocross Championship—the scene chosen for the system’s real-world R&D—with its two YZ450FMs and YZ250F equipped with EPS. The Company plans to use the wealth of data acquired through use in the harsh environment provided by top-level motocross competition to accelerate the system’s development and refinement.