On Mar 23, 2009
Share
– The second round of the ITP/Moose Racing AMA ATV Motocross Championship was held this weekend at Mill Creek Raceway in Pell City, Alabama, but the result was the same: Team Makita Rockstar/Yoshimura Suzuki rider Dustin Wimmer ended up on top. 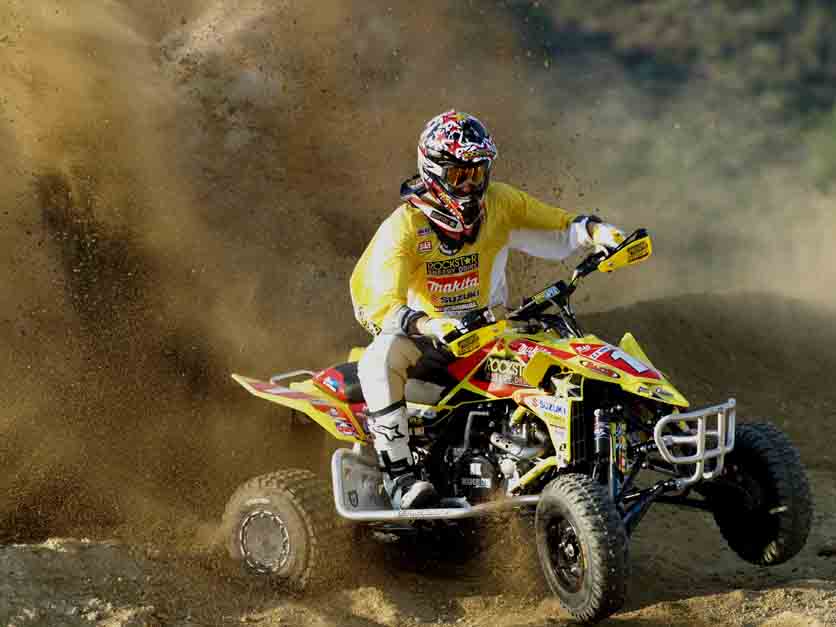 Both motos were quick and decisive. Under sunny skies and seasonal Alabama temperatures, Dustin Wimmer came out of the gate in 3rd in both races, but got around the leaders by the second lap. From that point on, he was in cruise control the remainder of the race.

“I was gaining about a second a lap,” Wimmer said. “At one point, I was told I had a 12 second lead in the second moto. It was very good day for me. I just wanted to come out this year as strong as last year, be strong, consistent and healthy and win another championship for Yoshimura and Rockstar Makita Suzuki.”

Teammate Doug Gust got caught in a tangle in the first turn of the first moto and struggled to get a 10th place finish. The second moto saw him cross the checkers at 5th, for a 6th place overall.

“Dustin’s in a league of his own out there,” Yoshimura’s Vice President Brant Russell remarked after the race. “Match the natural talent of Dustin with the power of the Rockstar Makita Suzuki QuadRacer R450 and you’ve got a pretty unbeatable package out there. It’s like he’s in another class and his fluid style makes it look so easy.”

Dustin agrees on the bike’s performance: “The bike was set up the same as it was for Glen Helen, but when I got out on the track on Saturday, I knew the bike was perfect from the get-go, and the other guys were going to have a hard time keeping up.”

Team Manager Kory Ellis was impressed with the rider as well as the team: “Not only is Dustin a formidable talent, but he also works hard and trains hard and it shows in his confidence and performance. We’ve got an excellent team this year and we’re all working together like a well-oiled machine. We’ve got outstanding sponsors and feel really good about getting the championship again this year.”

Wimmer is currently 11 points over second-place Joe Byrd. The next event is in Bowling Green, KY at Ballance MotoX on April 4-5th. Doug Gust won that event last year – so let’s look for two Yosh guys up on the bluegrass podium.