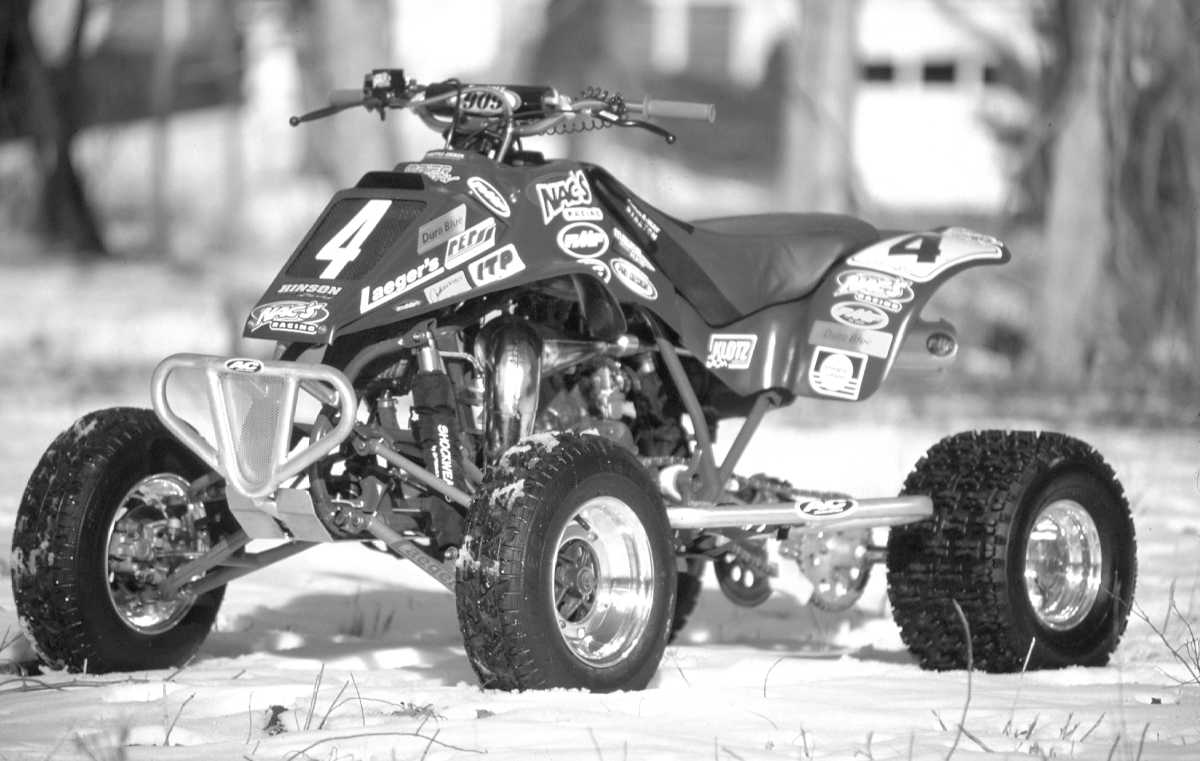 In case you didn’t know it, the Su­zu­ki QuadRacer LT250R was the first high-performance ATV to ever hit our shores. That momentous occasion oc­curred in ’85.

It was the first four-wheel­er to be seriously raced and it cer­tainly upped the ante in the trail riding/recreational world. Hon­da re­sponded with the FourTrax 250R, Ka­wa­saki came out with the Te­ca­te-4 and Yamaha’s Banshee all ap­peared in ’87, completing the Big Four’s dive in­to high-performance four-wheelers.

From ’85 to its final model year in ’92, thousands of QuadRacer 250s were sold throughout the country. To­day you can still see many ripping around sand dunes, on racetracks, and on the trails.

However, as anyone who has ever owned an ATV knows, this sport is especially rough on equipment and there are a lot more QuadRacer 250s in cobby condition today than there are clean ones.

GETTING THE NAC OF IT…

Darren Naccarato of Nac’s Racing has been riding and working on quads of all sorts for over 15 years. He currently fields a team for National Pro 250 racers Doug Gust and Sean Ser­mini. A sad QuadRacer 250 came in­to his shop several months ago—it was rusty, most of the bearings were worn out, the shocks were history, and the plastic . . . well, that was the worst of all. 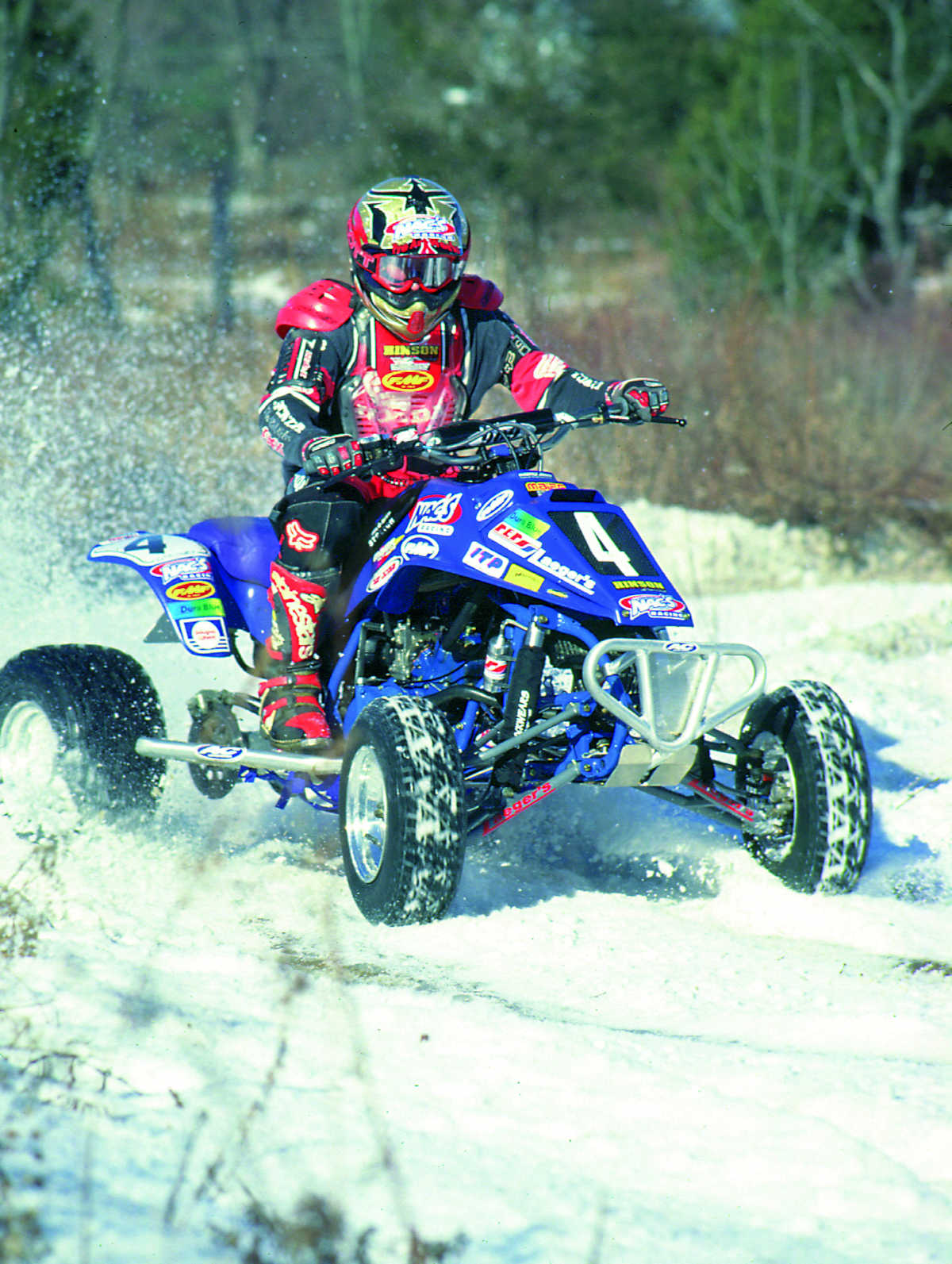 Nac set out to give this machine a new life as both a hot rod trail ma­chine or competitive motocrosser. For the reader who has a Quad­Racer in need of repair, or who is interested in buying a cheap “fixer-upper” in the classifieds and getting it up to specs, the following rebuild should come in quite handy.

“My main goals were to improve handling, performance, durability, and looks,” said Darren. “I wanted to keep the motor mods to bolt-ons only, giv­ing it good all-around performance with an easy-to-ride powerband.”

“I put more effort into the chassis and handling and I believe this completed machine is competitive with Hon­­da FourTrax on or off the track.”

The main boost in the horsepower de­partment is an FMF Gold Series “Fat­ty” pipe and silencer ($229.95), similar to the one Nac’s uses on its Na­tional racers. It’s designed to give a good solid hit in the low-end and midrange and features a shiny chrome finish.

Complementing the pipe is an FMF RAM Valve reed cage ($89.95). The tired piston was re­placed with a stock-bore Wiseco unit ($69.95) and the spark plug Nac likes to run with this combo is an NGK B8EV.

Also utilized is a Pro-Design Su­­percooler ($29.95), an aluminum finned tube that is installed on the top radiator hose as it enters the head. It is designed to lower water temperature as it goes back into the cylinder head.

To get even better intake, a K&N filter ($36.95) with an Out­er­wears filter skin ($13.95) was also in­stalled. Klotz Racing fuel and oil complete the engine package.

To refresh the clutch components, a Hin­son Racing Clutch Basket ($224.95) was installed with a Barnett plate spring ($89.95). The clutch cover was left stock but a sturdy Nac’s Rac­ing clutch cable holder ($24.95) was bolted on.

The cable holder is a great cheap fix for the stock unit, which tends to break off, leaving the rider with an expensive bill for a whole new clutch cover. An RK O-ring chain ($69.95) and Sprocket Specialist sprockets ($16.95 front, $44.95 rear) with 12/40 gearing replaced the worn stock units. Transmission oil and lubes are from Klotz.

A steel Laeger swingarm (-1” from stock length for tighter turning) and aluminum Laeger Round Hous­ing Carrier ($695 for both) replaced the cracked stock units. The Round Hous­ing Carrier is similar to that found on the Honda Four­Trax 250R and makes the chain ad­justment chore considerably easier than the old square stock Suzuki setup.

On this Quadracer rebuild, the whipped stock front A-arms were replaced with sturdy Laeger +2” Chromoly, powder-coated units ($524.95) which give the front end a four-inch-wider track and more stability when cornering. The kit comes complete with all ball joints and tie rods. Spindles and steering stem were looked over and kept stock, but a PEP three-way adjustable steering stabilizer ($95) was added for better handling and comfort over the rough, high-speed sections of the track or trail.

The worn-out front shocks were re­placed with PEP Standard Race Fronts ($595 per pair) that feature re­mote reservoirs and triple rate springs. They add a little over one inch to the wheel travel, with a total of 9.5 inches. The rear shock is now a PEP Race Rear ($650) with remote res­ervoirs and has nine inches of wheel travel (the shocks are capable of 9.5 inches, but the shortened swing­arm limits that).

Featured up front are the popular Nac’s Riken 145R10 grooved small car tires ($225 per pair with rims) which seem to last forever on racing and trail quads. They are mounted on Doug­las .190 3+2 offset wheels and are generally run with about 16 psi air pressure. In the back, we have 18×11-8 ITP Holeshots ($162.90 per pair with rims) on 8×8 Douglas .190 Honda rims (the hubs are DuraBlue 4/110 Honda bolt pattern units so they could utilize Honda rims). 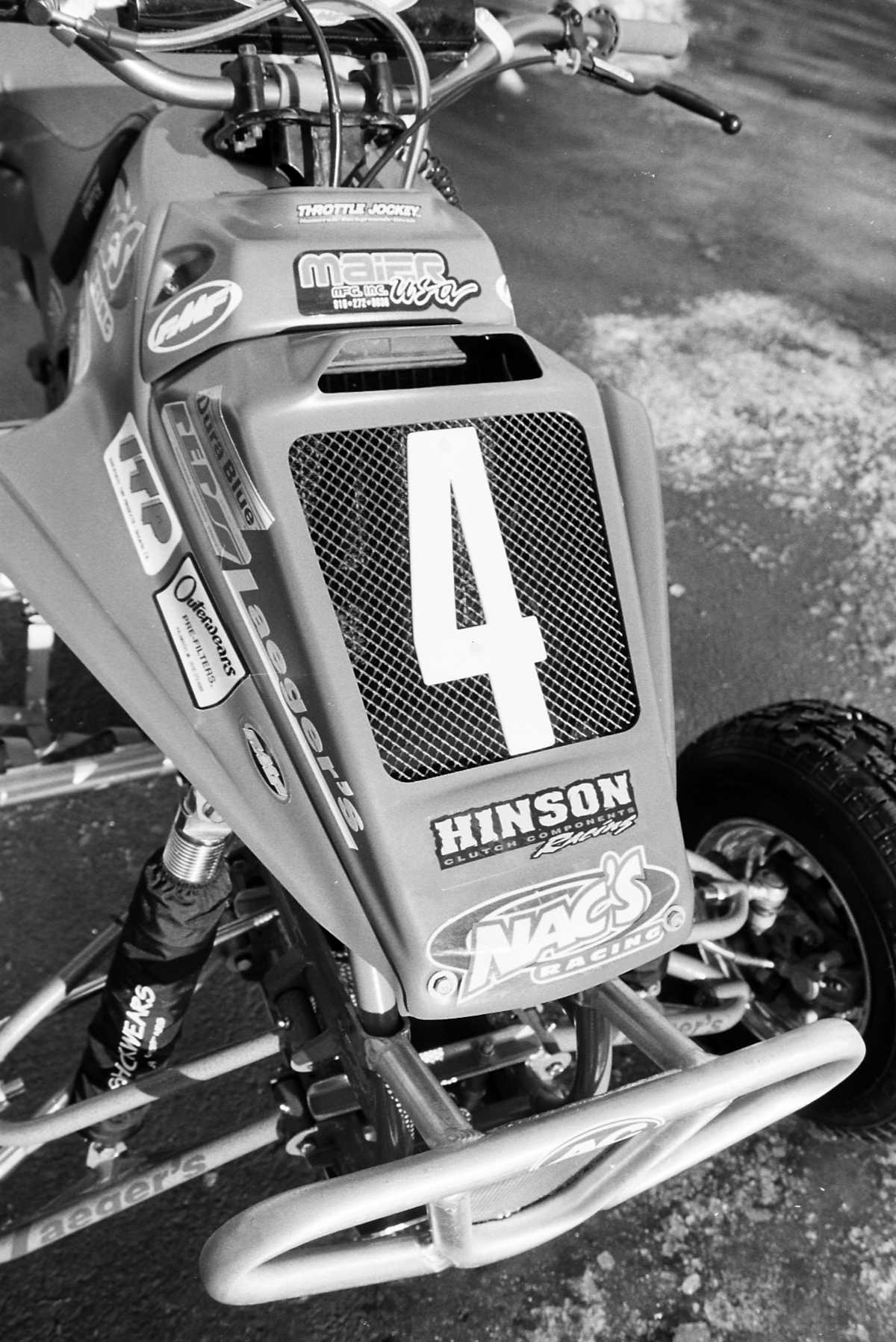 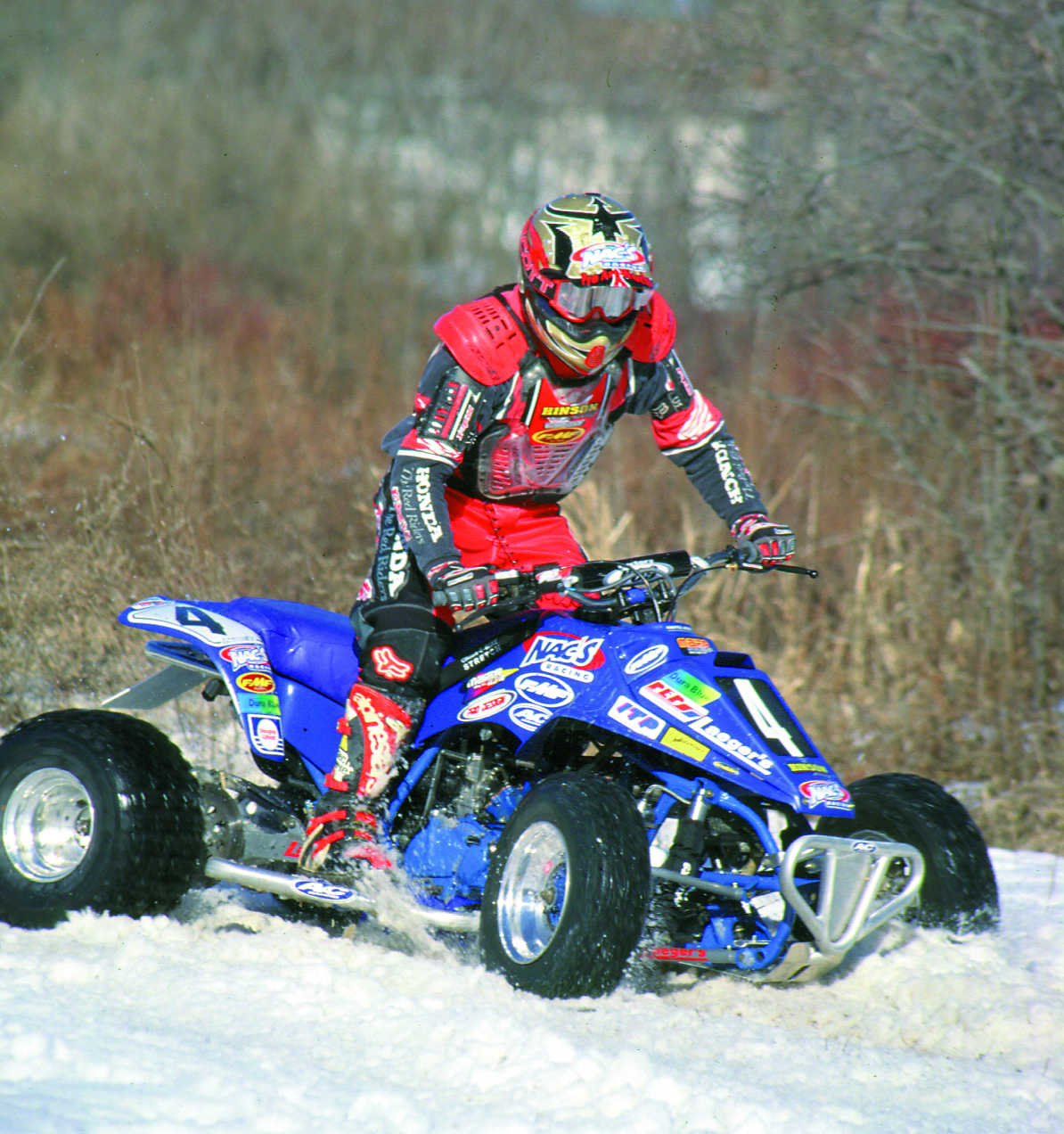 We rode the reborn QuadRacer on the tracks and trails of upstate New York to get a feel for the improvements. The power was strong and had considerably more grunt to it than the old stocker. At the same time, it was hardly more difficult to ride, in fact with a peppier powerband we were more precise coming out of corners and off of jumps. It was not that much louder than stock, ei­ther, and because there were no radical internal changes one can count on getting a lot of hours out of this en­gine before a rebuild.

With the +2” front end and the axle, al­so set wider, the machine could really rail around corners without two-wheeling. The PEP shocks were smooth right off the bat in both the bumps and jump landings. The ma­chine just feels like it wants to be ridden fast rather than just putted around.
Having all the controls checked, lubed, or replaced gave the machine a new life as well. We started whooping it up on this cool blue QuadRacer just like when we used to get brand new ones from the factories to test!
In the looks department, you can see from the photos that this is one sharp quad. What was once a rag­gedy wreck collecting dust in someone’s garage is now an eyecatcher wherever it goes.
For more information on this proj­ect QuadRacer, contact Nac’s Racing at (914)246-3086 where all of these parts can be purchased.

A quick video of a DirtWheels Modified 450 Shoot-out from a few years back: