The only thing that topped the scenery was the riding

We had the chance to visit Winchester Bay in Oregon to get some seat time on the current Raptor and YFZ450R. Although nothing has really changed for 2022 compared to the 2021 models, Yamaha wanted us to get an experience that showcased the design of both machines. A place where sport quad power delivery and handling would be highlights.

We couldn’t recommend Winchester Bay more for an ATV adventure. It has a unique mixture of ocean, dunes and rainforest pines that have trails going all throughout them. The sand trails are specifically double track and just wide enough for a quad. At one point someone said, “this is like a rollercoaster,” and that about described it best. Although we’ve never experienced scenery quite that beautiful at any theme park we’ve been to. 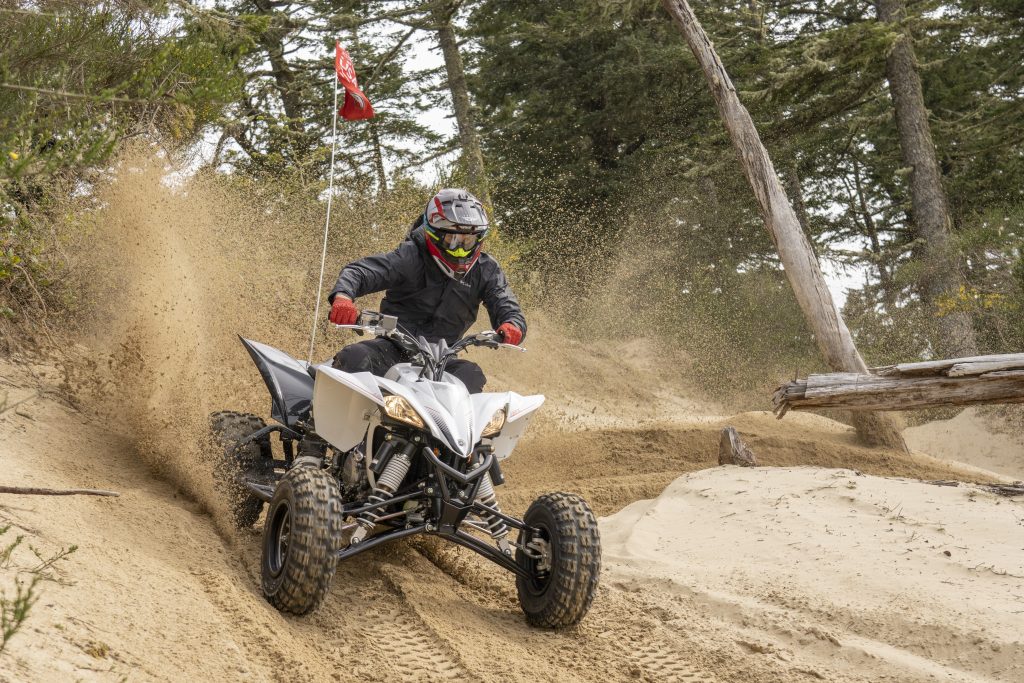 The singular dominant force in ATV racing for well over a decade, the YFZ450R has multiple championships in GNCC XC1, WORCS, Quad-X and AMA ATVMX motocross championships. Dustin Nelson was one of the dominant ATV champions, and he joined us in Oregon. It’s more than a name drop though because having a rider of his caliber to follow helped us more fully realize the quad’s potential. Just riding behind him elevated our level of riding and helped us learn what the quad could really do when pushed.

You would think the 450 would be substantially less powerful than the Raptor 700. It’s a good chunk of cc’s less, but we made it up all the same technical climbs that we made on the Raptor. Of course, that took a little more coaxing and body English. The YFZ really likes to be ridden with high RPM, particularly going up steep climbs.

We could generally leave it in second and third gear for everything except wide open dunes. The low-end hit of the YFZ was exceptional, and it shines coming out of corners or popping the front end up over big tree ruts.

Don’t expect to miss whoops on the trails in Oregon. At least if you intend on staying on the trail as you should, because they were unavoidable in many sections. Again, following Dustin was helpful and gave us a little more confidence to hit whoops a little faster. We noticed the handling started to come alive the harder we rode it. The YFZ did a good job staying on top of the whoops if we kept up the momentum. 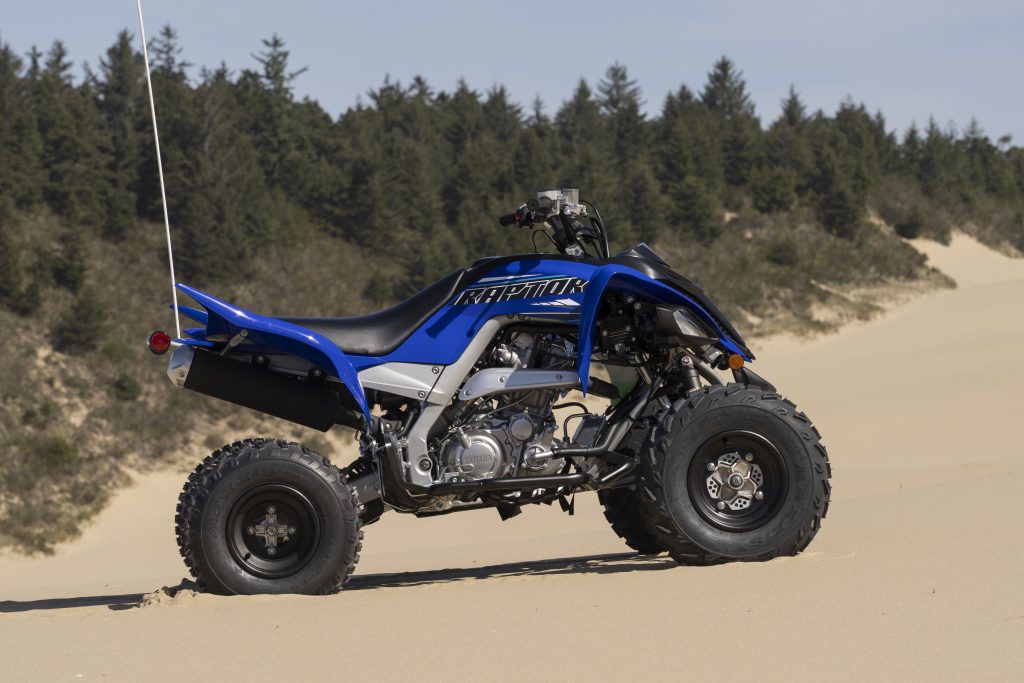 Our initial ride on the Raptor came second to our YFZ ride, and what we experienced was surprising in a few ways. First, the fact that it is a little narrower and taller was noticeable through corners. It wasn’t a huge difference though, and unless you’re an advanced rider pushing the limits, it would be even harder to notice.

We would’ve expected the Raptor to be less stable in the whoops considering its dimensions. If anything, it felt more comfortable in the whoops. Maybe not as capable as the YFZ at going as fast through them, but the extra travel made it more forgiving and manageable.

The power was great and didn’t require high RPM like the YFZ did. Especially on the tougher climbs through the deep sand. Third gear was about perfect for most of the trail riding, whereas the YFZ required more shifting to stay in the powerband. 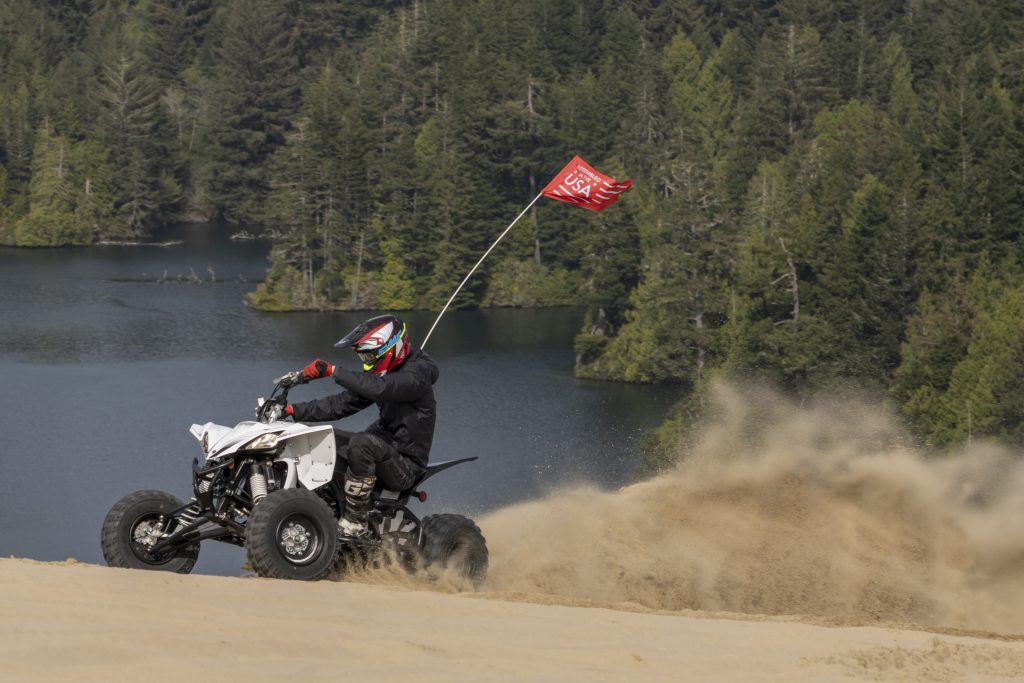 WHICH IS RIGHT FOR YOU

If you’re not a serious racer or someone who likes to ride like one, the Raptor is the way to go. It doesn’t take as much aggression to get it to work with you on the trail. The power of the Raptor won’t overwhelm most riders unless they haven’t ridden much at all. It has smooth delivery but will keep pulling hard if you need to get out of trouble.

The YFZ benefits the more advanced rider. Anyone could ride and enjoy it, but it requires more rider input and momentum to go up things that are slightly easier on the Raptor. We really enjoyed the hit from the 450 motor for popping the front end up, but being in the right gear was more important.

Yamaha had both quads fitted with GYTR nerf bars. Bars that surround the pegs and have nets that prevent things from hitting your foot and you from putting your foot down while riding. We couldn’t imagine riding without them and they are probably the first thing we would purchase as they just made us feel more safe.

The clutch lever pull on both machines was smooth and never had our fingers feeling fatigued in the hours we spent riding. We spent a lot of time on both machines and will have a full rundown of them in the magazine coming in coming months.