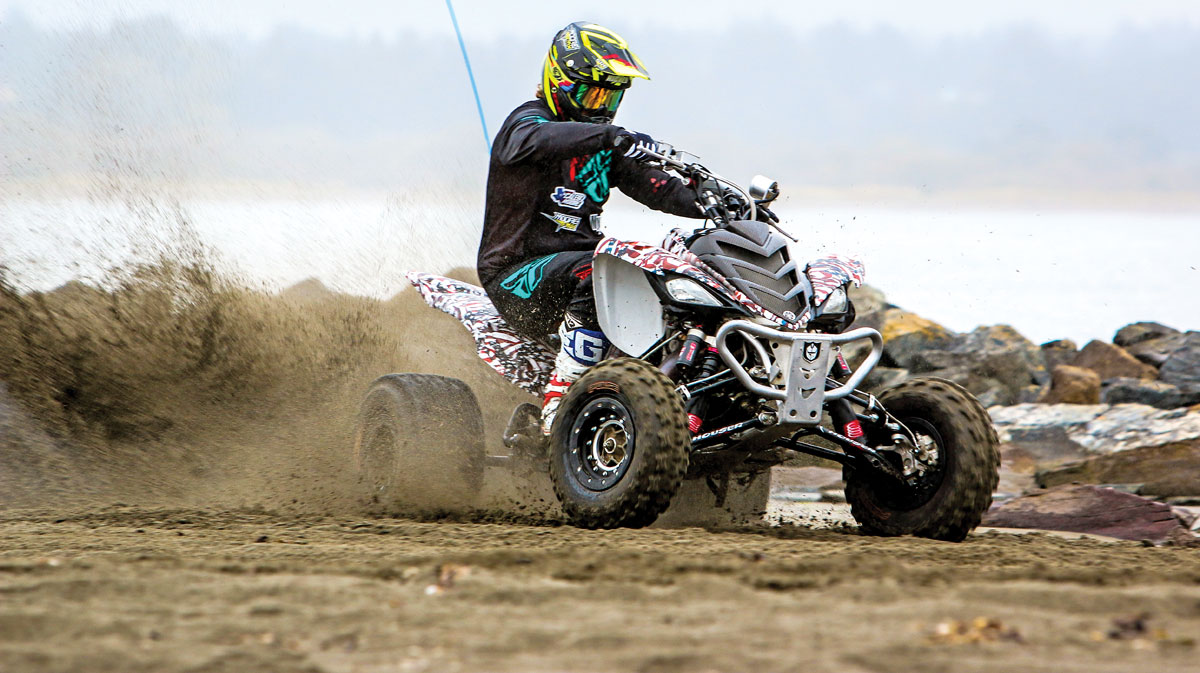 Yamaha’s Raptor 700 is a force to be reckoned with in the world of sport quads. It is the top big-bore sport quad around and is the last one that is still being manufactured today. The Raptor 700 is fast in stock trim, but Roger Kirkpatrick from Humboldt Motorsports was tasked with taking a 2007 Raptor and turning it into a mean sand-slinging machine. Bolting on parts to increase the machine’s handling and performance capabilities was very important with this build, mainly because a very powerful turbo system was about to be installed on it. There is nothing quite like the feeling of pinning the throttle on a race-gasburning, speed-craving monster like a hopped-up Raptor 700!

BRING ON THE POWER
A cheap budget was thrown out the window to build this insanely fast Raptor 700. The goal was to increase the power of the Yamaha and make it handle like a dream for the dunes and sand drag racing. An English Racing Turbo kit was installed, but not before some internal engine modifications, like a port and polish on the cylinder head and an added second fuel injector to increase the flow of gas to the engine. A Kibblewhite valve kit was installed, along with a Wiseco piston kit and a Web Camshaft. When it comes to increasing the airflow to the engine, Humboldt went with custom K&N filters to do the job. To assist with expelling exhaust gases is a custom-built downtube. A Dynojet Power Commander handles the airto-fuel ratio.

Now that the engine puts out a lot more power with the English Racing Turbo kit, and a port and polish of the cylinder head was performed on the Raptor, E85 racing gas must be used in the Yamaha’s tank. The turbo system initially puts out 14 pounds of boost, but Humboldt Motorsports tuned the turbo kit to run at 21 pounds of boost and turned the Raptor into more of a major powerhouse. The clutch was upgraded to a Lockout clutch, which is mainly designed for sand-drag-racing ATVs. This Yamaha is no longer your average trail rider!

To help put the power to the ground, Roger and his team went with JT front and rear sprockets, and an EK SRX chain was also installed on the machine. CST Pulse tires mounted on Hiper beadlocks in the rear transfer all of the added horsepower from the Raptor’s new engine modifications directly to the ground.

INCREASED HANDLING
Whenever you install performance parts to increase your machine’s speed and acceleration, it is very important to make sure you install parts that help it handle better and stop quicker. In the braking department, Humboldt installed EBC R-series brake pads with EBC Wave brake rotors and steel-braided lines. Better pads and rotors give your quad more stopping power, while steel-braided brake lines give your system a better feel and stronger braking power.

In the handling department, one of the most important parts installed was a Lonestar Racing +4-inch-longer swingarm. With an ATV this powerful, it is likely to easily pull wheelies and be unmanageable with a stock-length swingarm. The added 4 inches helps keep the front end on the ground and transfer more of the machine’s power to the terrain. Next, a LSR +4-inch axle was installed to widen the rear end of the Yamaha. With the addition of Houser Racing’s Tric Trac +4-inch-wider A-arm kit, the Raptor now corners better and is more stable at higher speeds. A Houser Racing’s Anti-Vibe steering stem and Fasst Co. Flexx handlebars smooth out the vibrations from the bike’s engine and riding over rough terrain. Houser Racing Anti-Vibe nerf bars add great foot traction to the Yamaha. One of the most essential handling upgrades on this machine is the Elka Stage 5 shocks mounted on the front and rear of the Humboldt Raptor 700. Suspension can make all the difference on any machine when it comes to going fast. 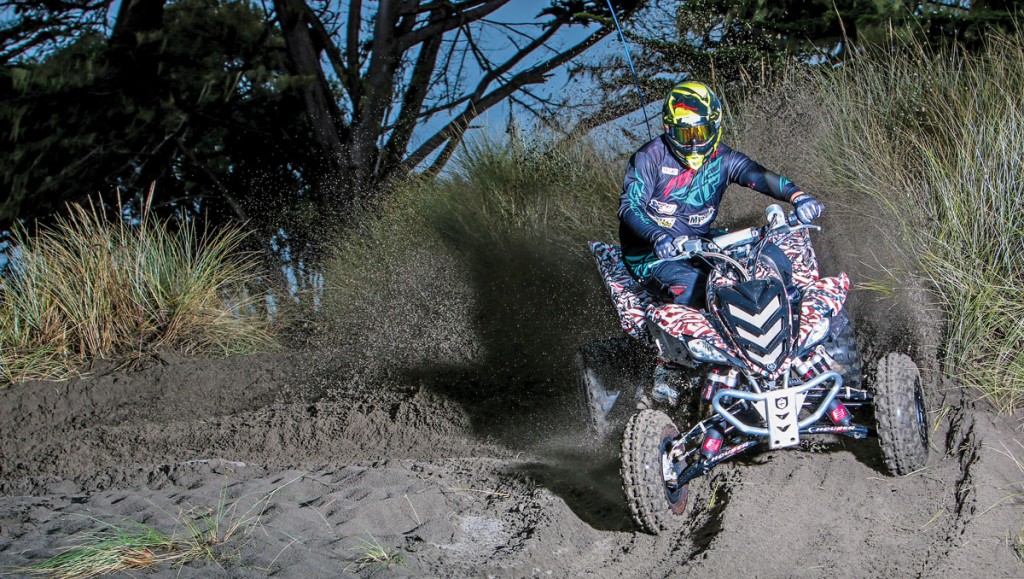 TEST RIDE
Nicholas Hickey of Nitro Circus, Monster Jam and Moore FMX testrode this mean machine, and here is what he had to say about it: “This ATV is the fastest I have ever ridden, and I have been riding and racing for years. Once the turbo spools up, you need to get a tighter grip on the bike because it becomes insanely fast. This Raptor 700 is not for the average rider to handle and takes learning the power of it before you can really open the throttle up. The engine has a smooth low-end power, the turbo spools up quickly, and at around half throttle it starts to unleash its power.

“Handling and braking are a necessity, and the improved stopping power was solid, because the Raptor will stop on a dime. As far as handling goes, the added width of the new A-arms and rear axle helped with cornering and stability. The longer swingarm helped keep the front tires on the ground, which can be a difficult task with this ATV. The Elka Stage 5 shocks soaked up a lot of chop and ruts. Turning the Yamaha was a lot better than stock, and with the addition of the Flexx bars, it felt like I was riding on a pillow; it’s that smooth. The bike set itself into berms very well, and it is great as a dune machine. It is one of the best sand bikes I have ridden.“

FINAL THOUGHTS
When Roger’s customer asked for a fast quad that could beat competition out in the sand, he didn’t take that task lightly. This Humboldt Motorsportsbuilt Yamaha Turbo Raptor 700 has enough power to easily pull you right off the back of the quad. It handles like a dream, and not only that, it looks great doing it too. Humboldt Hydrographics dipped the Raptor’s plastic with an American flag design, along with dipped carbon fiber-looking pieces. The powdercoating was performed by Humboldt Hydrographics, and Cerakote coated a few other pieces as well. This bike looks great and performs even better!

CAMP RZR IS HAPPENING! Save the date