The release of the 2016 Polaris RZR XP Turbo raises the bar in several areas. One, at a claimed 144 crank horsepower, the RZR Turbo is the most powerful UTV made. However, at $24,999, it’s also the most expensive standard-edition, two-seat model as well. The latter hasn’t seemed to affect sales so far, and we already see dune areas in the Southwest dotted with them.

ALL-NEW RZR
To our surprise, Polaris didn’t just slap a turbocharger onto the existing XP1K platform; they gutted the old machine and made a ton of upgrades to the drivetrain to handle the power of the all-new engine.

Yes, this is not a turbo-equipped XP 1000, but Polaris designed a brand new ProStar powerplant for the Turbo model. This mill is a familiar parallel-twin-cylinder DOHC design. What stands out is that it is only 925cc. Polaris no doubt reduced the cylinder size to increase the oil passages and water jackets for better cooling. It’s not to say you can’t bump it up to a 1000cc cylinder and get to a more power. However, the easier way to modify the machine is to reprogram the ECU. Companies like Hard Core Tuning (www.hardcore-tuning.com) are re-flashing ECUs for $549, which adds a claimed 20 rear-wheel horsepower by increasing the boost signal to the turbo by 16 pounds. It would also get rid of the electronically controlled rev limiter.

In our testing, the RZR Turbo topped out just as the speedometer read 80 mph; however, our GPS only showed 78 mph. You could tell the engine had much more left to give. We estimate you could reach 90 mph by only modifying the speed/ rev limiter. Getting to that speed is a blast, though. Our initial test was on hard packed dirt, so we kept the RZR Turbo in four-wheel drive most of the time. In 2WD, the rear end would just spin and struggle to hook up. However, in the sand, it hooks up better, but we don’t like the way the Maxxis Bighorns wander in the sand. We suggest driving this machine in 4WD just as we recommend for most UTVs. That is, of course, not the same if you are running paddles; in that case, 2WD works well.

Around our test track the Turbo flies. In fact, there are only a few spots on the course where you actually need to hit full throttle or want to. It jumps out of corners quickly even in the sand washes. It goes down straights blindingly fast and approaches corners much faster than we were used to. The Can-Am Turbo did surprise us, too, when we first drove it. The car doesn’t seem to float any more at top speed than the standard model. That might be thanks to the addition of the front sway bar.

CHASSIS CHANGES
To keep all that power flowing to the dirt reliably, Polaris beefed up the driveline and the brakes. This model features three-piston front-brake calipers and thicker stainless steel rotors on all four corners. The Turbo features Fox Podium shocks with 7/8inch shafts at both ends and a front sway bar as standard equipment. About the only thing noticeably different when looking at a Turbo RZR is the aggressive hood scoop. The scoop directs air into the oil cooler and radiator. The whole cooling system is a lot more complex on this model. The flow of turbo-forced intake air is cooled before it enters the intake system when it passes through a watercooled intercooler. So, the amount of radiator lines running from the front of the car to the engine compartment is doubled, and you will find a few extra random coolant lines in the engine compartment as well. You still access the valve cover and air filter by removing a small cover in the floor of the cargo area.

HANDLING
We have to admit, we didn’t like the way the original XP 1000 handled. It had a lot of body roll that took some getting used to. The Turbo car is different, as was last year’s Fox Edition. Body roll has been cut in half, and steering precision has been increased thanks to the extra sway bar. The car still feels tall, especially compared to the RZR S or the new Yamaha YXZ. That extra height allows this RZR to have the most suspension movement in the class. Up front the dual A-arms move 16 inches, while the rear moves a class-leading 18 inches. That extra travel helps it drive through G-outs better, over the whoops smoother and across nasty cross-grain the smoothest. If you are looking for the most comfortable, plush ride, the XP RZRs have it. 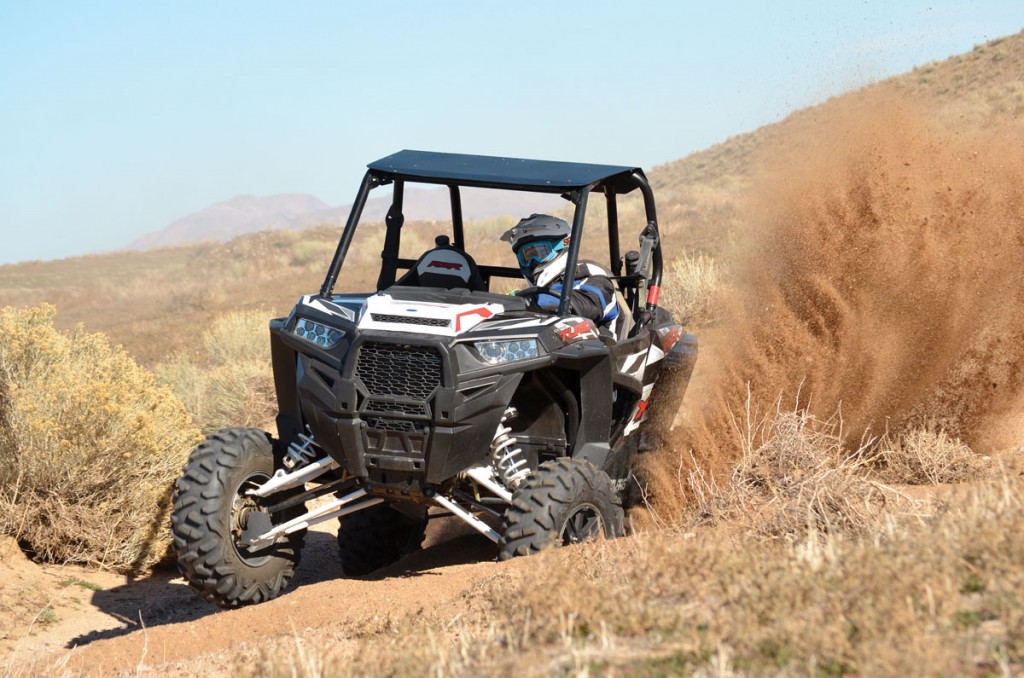 We like cruising the Turbo on slower trails. The clutch action is smooth and the gas pedal is never jerky. Most of the power increase is at about half-throttle. It makes a great rock crawler too. Having low range at your disposal can get you over almost anything and help conserve belt life. That belt is even bigger for the Turbo, and we haven’t heard any reports of it lasting more or less than a normal RZR. No matter what, we always recommend carrying a spare belt, the tools to change it and the know-how to get it done. At www. dirtwheelsmag.com, you can see a helpful video on how to do it.

CONCLUSIONS
The Turbo RZR is good. It’s the best all-around-handling, fastest UTV out there. It’s still easy to work on, and Polaris is committed to making the platform more reliable every year. About the only thing we can see going wrong with this machine under normal conditions is the tires going bald. Is it the right machine for everyone? Probably not. If you want to cruise marked trails at your local riding area, the standard XP 1000 is plenty, or even the S 900 or S 1000 might be perfect.

If you drive on hardpack terrain, are very skilled and can read terrain like a cheetah, you can handle it. And, if you are strictly into racing or riding at the wide-open sand dunes and can use all of the 144 horsepower on tap, you can’t go wrong with the RZR XP Turbo.