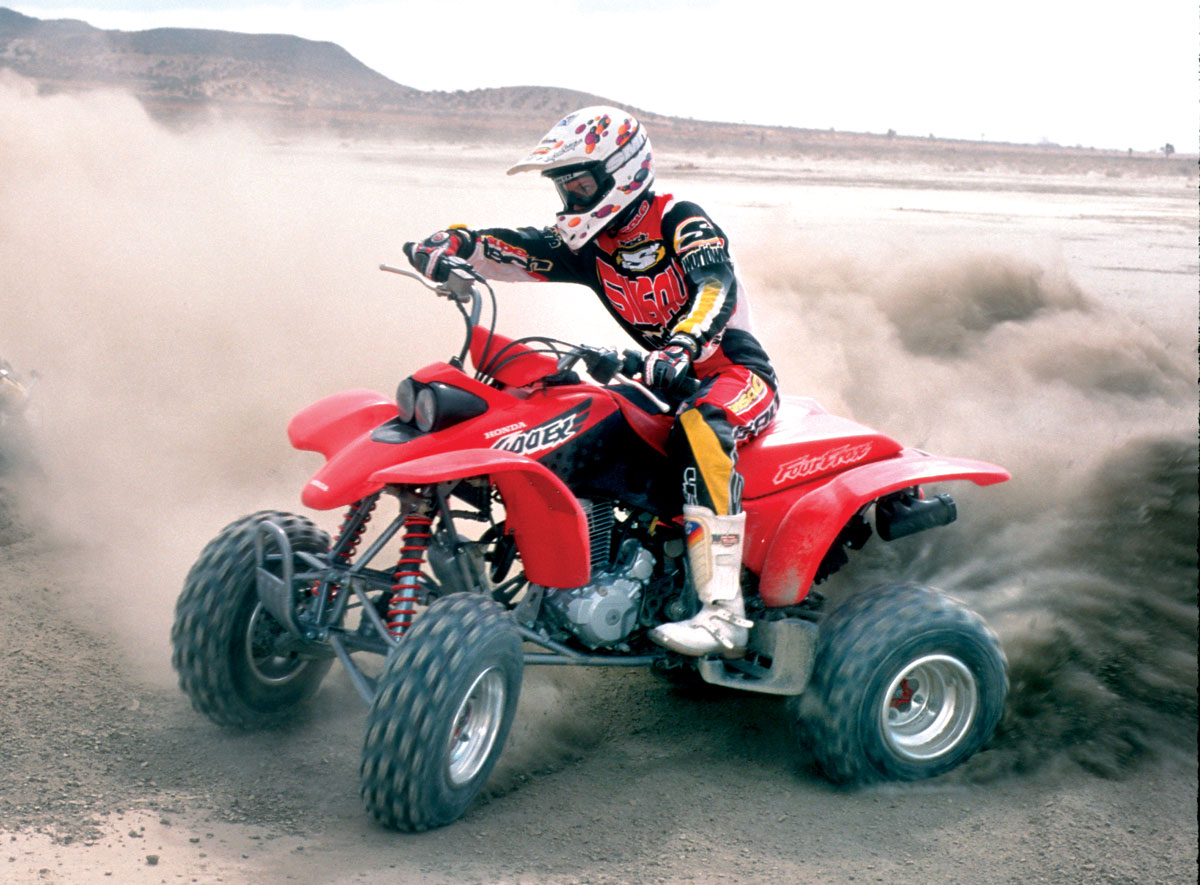 The life and times of Honda’s TRX400EX:

— THE QUAD THAT CHANGED THE SPORT —

The ‘90s were the dark ages in ATV history. Sport quads vanished, ATV manufacturers retreated and the forces of mediocrity and bureaucracy advanced, threatening to overrun anyone who dared to ride a quad for the pure joy of it. Then, in model year 1999, that entire era came to a close with the appearance of one ground-breaking machine: the Honda TRX400EX. From that point on, the sport would never be the same.

The Honda 400 was a game changer on several levels. First, it was the first sport ATV in 10 years. Throughout the ’90s, most new ATVs came with racks, while racers continued to recycle old two-strokes from the glory days. Yamaha continued to make the Banshee and the Blaster during this period, but there was nothing new on the sport horizon. And the EX was a four-stroke, the forebearer of today‘s potent 450s. The fact that the machine remains in Honda’s line to this day is a testimony to the machine’s perfect fit into the modern ATV market. 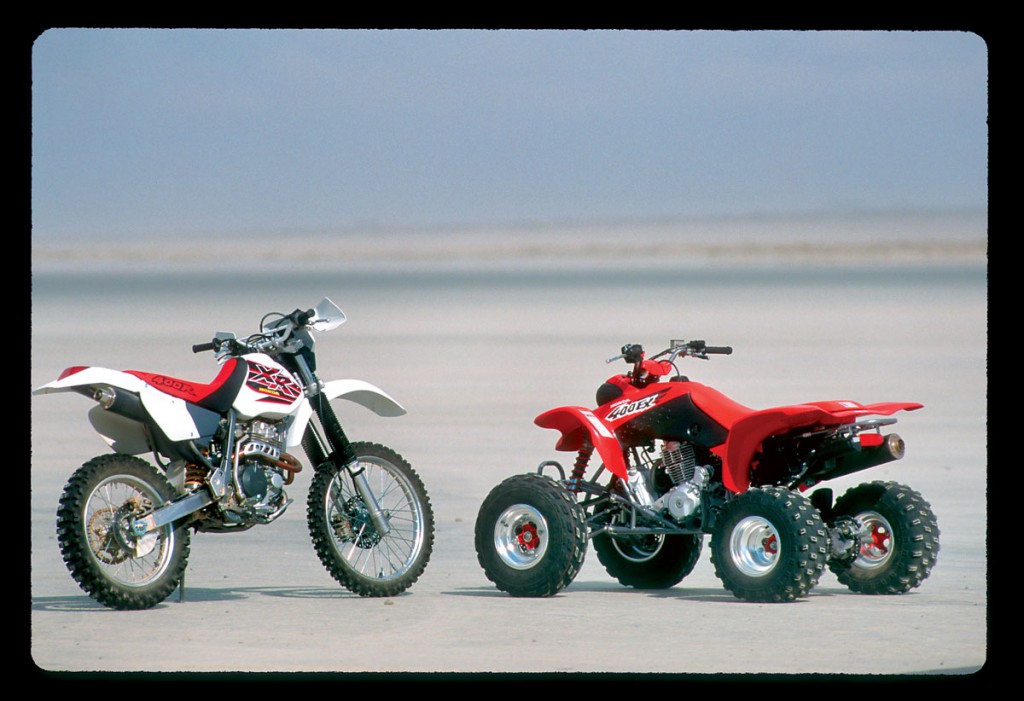 BEFORE THE RENAISSANCE
In the years before the arrival of the EX, ATVs were painted as dangerous playthings made by irresponsible corporations. Bad press and governmental involvement basically scared the industry into hiding. In 1987, Honda made a dozen different ATVs, including the full-race TRX250R two-stroke, but by 1990, the company offered only two.
A big factor was the Consent Decree of 1988. The Consumer Product Safety Commission had filed suit against the ATV industry, using a statistical increase in the number of injuries as evidence that ATVs were unsafe, particularly for children. In order to resolve this, five ATV manufacturers signed a 24-page document that held a number of stipulations. One was that the industry would spend $10,000,000  on rider safety programs over the next 10 years. Another was that three-wheelers would give way to four-wheel ATVs. Nothing in the Decree banned sport quads; however, Honda and Suzuki lost the legal appetite to stay in the market.

By 1998, the skies began to clear. The Consent Decree officially came to an end, but all the manufacturers continued to abide by its guidelines. Rider education would continue, there would be continued effort to keep underage riders off adult-sized ATVs and three-wheelers would remain in the past. But, it was time for sport ATVs to return. For years, racers had been keeping their old Honda and Suzuki two-strokes alive. Aftermarket chassis had long since replaced the stockers, but the same motors were being rebuilt over and over. There was a pent-up demand for something new.

No one at Honda was saying it out loud, but it was clear to some inside the company that the next generation of motorcycle and ATV engines would be four-strokes. Yamaha just introduced the YZ400F motorcycle to rave reviews, and Honda had no intention of just making another new two-stroke motor for an ATV. The logical step would be to use the most appropriate existing motor to test the waters for a new generation of sport ATVs. Lucky for us, that motor was the one from the XR400R. 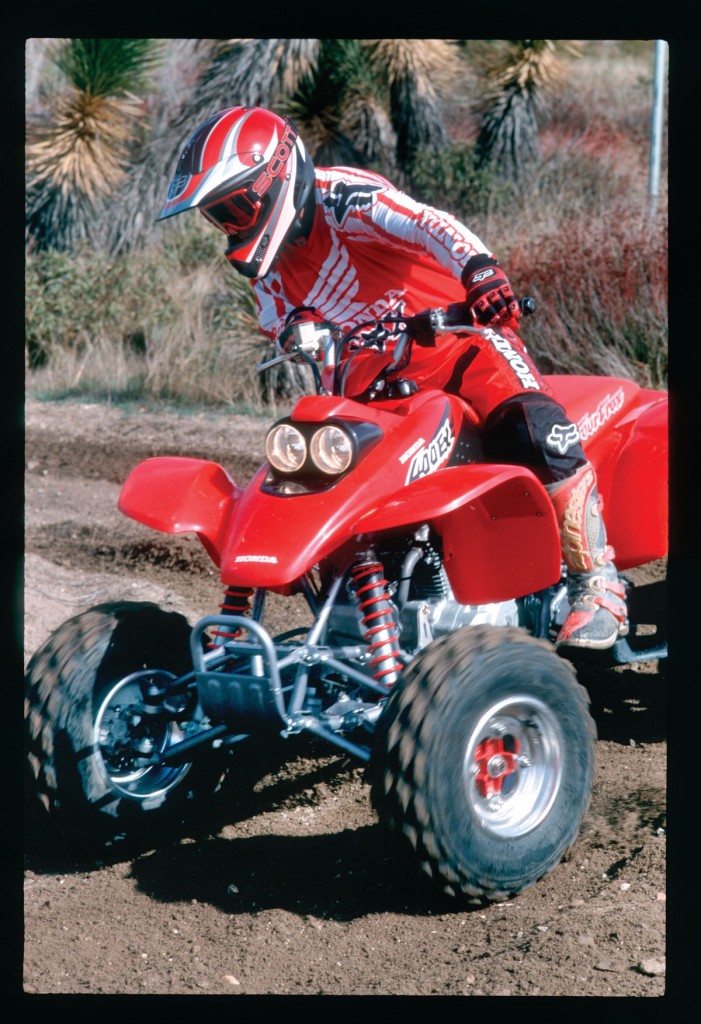 A NEW ERA
The 1996 Honda XR400R motorcycle was a ground breaker in its own right. Prior to that, Honda seemed disinterested in the off-road motorcycle market. The XR350R had been dropped in 1985, and Honda seemed content with its mammoth XR600R and its little XR250R—neither of which was particularly advanced. Then, the 400 came along to enthusiastic reviews, and that played a big role in the decision to give the ATV version a green light.

In typical Honda fashion, the TRX motor looked similar, but was actually very different from the motorcycle powerplant. The swingarm pivot was relocated, the gears were heavier and even the cases were redesigned. And, of course, it had electric start. That wasn’t really a first for a sport quad, as electric starters had been available on machines like the Yamaha Warrior, but it was still considered rather risky for a machine that was meant to appeal to the purist. Between the four-stroke powerplant and the electric starter, the new 400 was 20 pounds heavier than the beloved TRX250R, and that might well have spelled the end for the EX right there.

In terms of horsepower, the two machines were about equal. The 400EX put out 25.4 horsepower on the White Brothers dyno back in 1999. Most surviving 250Rs  were heavily modified by then, but a stock one would have had similar peak output to the new 400. The biggest difference was the width of that powerband. The four-stroke started making power at a lower rpm and finished at a higher rpm—that made it much easier to ride for the average Joe.

The handling was also vastly improved. The 400 had the benefit of 10 years of aftermarket development. The stock 250R frames had long since been retired as suspension and geometry advanced. According to Bruce Ogilvie, who headed the EX testing team for Honda, the rigidity of the swingarm made the 400 much faster in whoops compared to its two-stroke ancestor.

That first year, Dirt Wheels editors teamed up with Ogilvie and Honda to attempt the Baja 1000 on a nearly stock 400EX. The machine was basically rolled out of the warehouse and onto the start line after a professional prep job; they just hoped to finish. As it turned out, they won, finishing well ahead of their two-stroke adversaries in Class 25. The 400EX proved itself to us, and soon to the rest of the ATV world, as it became Honda’s biggest-selling model for several years running. 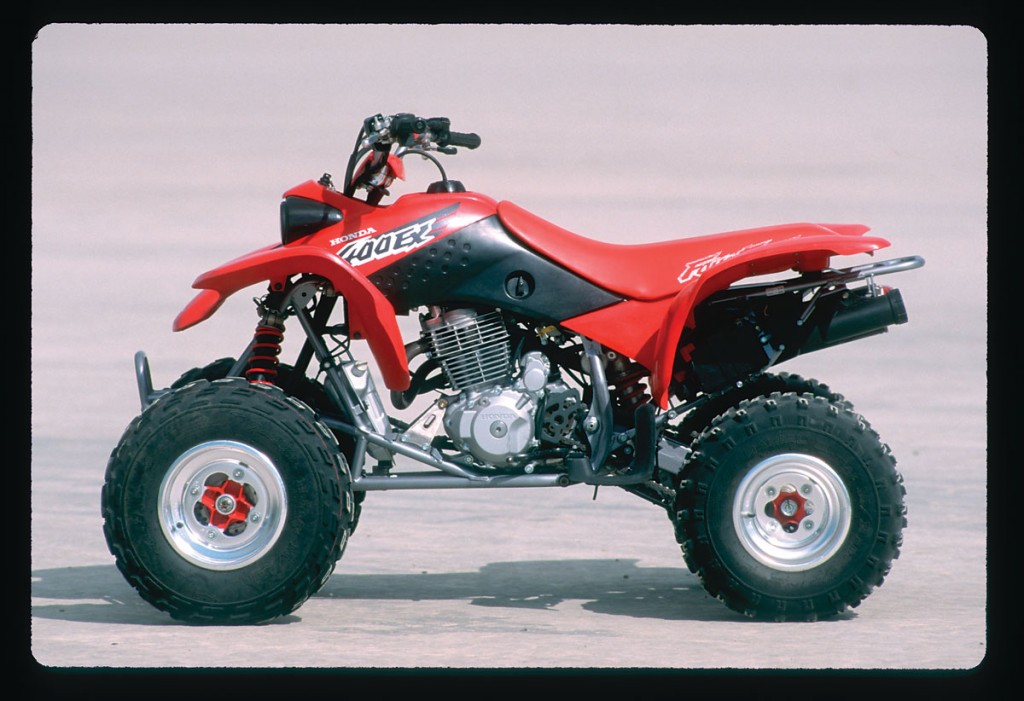 TIMELINE
1996: Honda introduces the XR400R, a motorcycle that would provide the engine for the initial EX prototypes.

2003: After watching the Honda 400 dominate sales charts for four years, Suzuki answers with its own sport quad. The LTZ400Z Quadrunner is released. Like Honda, Suzuki used its 400 motorcycle powerplant as the core. Unlike Honda, Suzuki wins a national motocross title. The war is on.

2004: Yamaha ups the ante with a faster, lighter, more race-oriented sport quad: the YFZ450. Honda joins in with the TRX450R, and the Honda 400EX survives in the lineup by keeping its appeal to trail riders and its price well under that of the 450s. 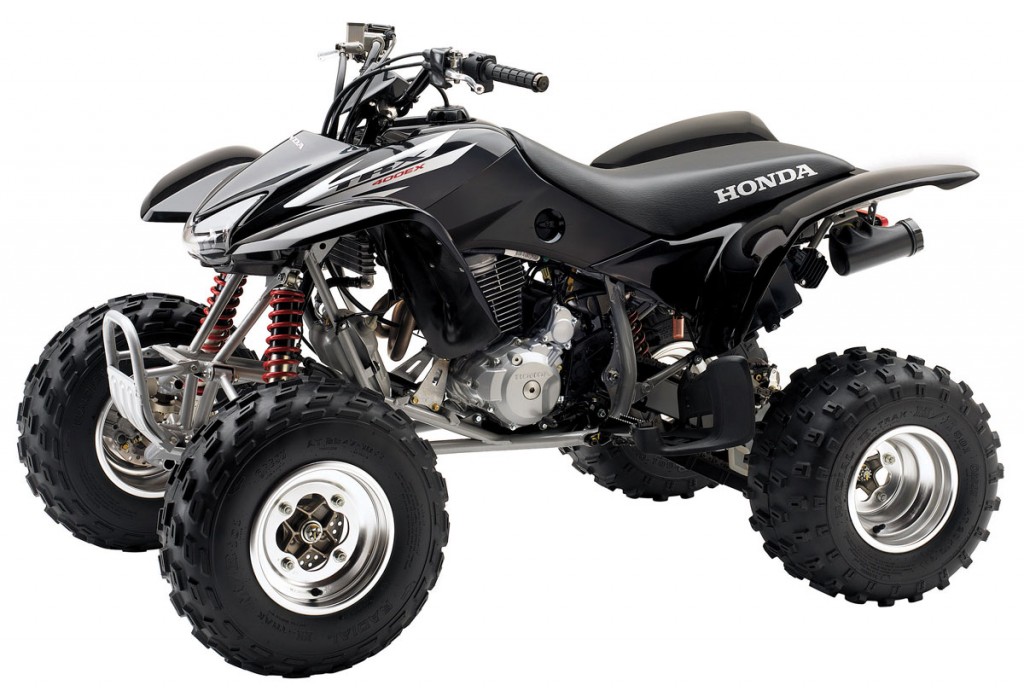 2005: The EX isn’t done yet. It gets reverse and new bodywork. There are also suspension upgrades. 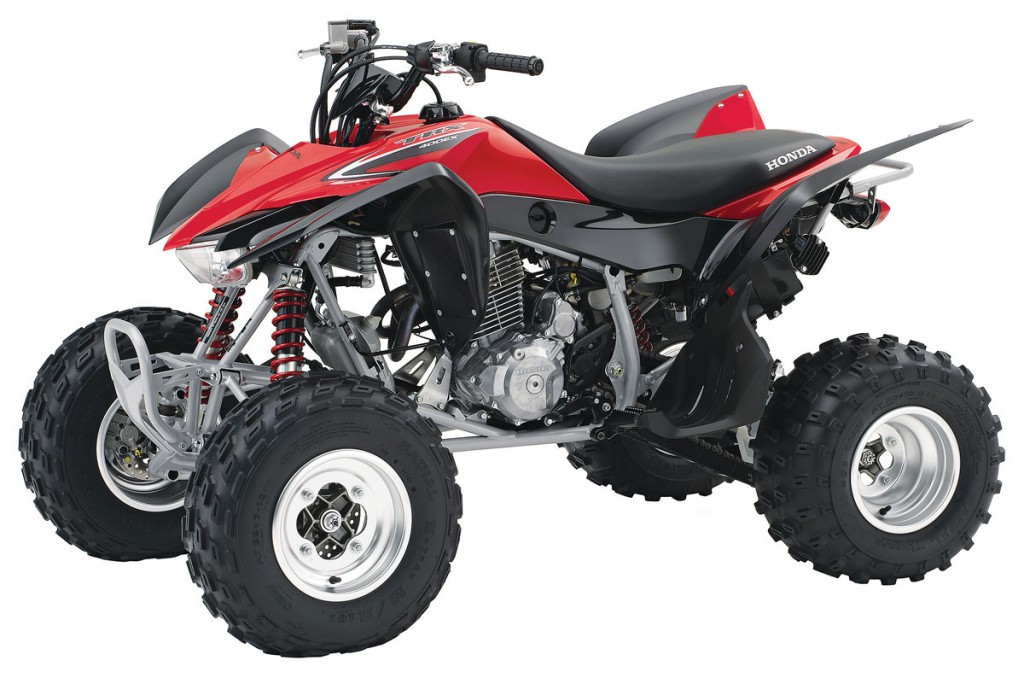 2015: Honda just announced its 2015 line, and the 400X is back, making it one of the longest-running sport quads on the market.

USED QUADS
Honda 400s are everywhere on the used market. They represent a great value for several reasons: First, they didn’t break. And second, they usually weren’t raced. In the early years, the old two-strokes were still the preferred race mounts, and in later years, the 450s took over. Expect good examples of pre-2005 models to sell for under $2000.

There are a number of hop-ups available, from cams to big-bore kits and stroker cranks. In general, the Honda responded well to these, but the more power it made, the more it stressed the gearbox and the clutch. Both would be weak points if the motor was beefed up.

Virtually all the big aftermarket companies make exhaust systems for the Honda. The least expensive one we have seen is the DG RCM, which is $180. We don’t know of any aftermarket cylinders, but LA Sleeve will sell a new sleeve for $80 plus labor. Millennium Technologies will re-plate most cylinders for around $200 if the damage isn’t too severe. A new Honda OEM head costs almost $600, but Service Honda has the best price we have seen online: $401. That’s about the most expensive item to replace on the Honda, but the good news is that the original Honda head will go forever.

That’s probably the only real threat to the continued existence of new Honda 400s: old Honda 400s. They are out there in huge numbers, and they aren’t going anywhere. It continues to be a nearly ideal sport quad; it’s no racer, but it’s reliable, fast and fun.  Anything that replaces it will have the bar set very high indeed.