WHAT YOU SHOULD KNOW ABOUT THE RZR RS1

— The fastest single-seater UTV from Polaris —

One thing you can say about Polaris is that the company does not sit still. After basically creating the multi-seat sport UTV market, the “Big P” dropped the Ace single-seat unit on us. That first Ace featured the capabilities of a 4×4 quad that you sit in with a roll cage. Next, after a variety of compact Ace models, came the Ace 900 XC that was wider, longer and powerful with more suspension. It is close to the maximum performance you can still fit in a truck bed. For 2018 Polaris has slammed our minds with the RZR RS1. The RS1 is a driver-centered single-seat UTV that is a full 64 inches wide with 18 inches of rear-wheel travel! Basically, it has all the power and suspension of the RZR XP 1000 with an upgraded drivetrain, but in a physically sleek package with a slim single cab. You are free to let the engine sing without having to listen to a passenger screaming.

Mere days after news of the RZR RS1 hit the internet, Ronnie Anderson won the SxS Pro class at the first WORCS (World Off-Road Championship Series) of 2018. WORCS racecourses vary widely in how long and rough they are, but the opener runs in and out of the Orleans Arena, and despite that somewhat artificial stadium-type race, a first-time-out win at that level is most impressive.

Polaris calls the RS1 a “driver-focused off-road experience.” The RS1 is claimed to be the most nimble RZR chassis ever. This isn’t a repurposed XP 1000 rolling chassis remodeled for a single seat, but a precision-balanced chassis that puts the driver in the center of the machine.

Think of some of the most exotic race cars in the world, and they have the driver in the center-of-mass driving position. F1, anyone? All Polaris RZR models have excellent sight lines compared to other brands, but the RZR RS1 has sight-line visibility to the front and the side that is exceptional.

Look inside and you will see quite an unusual (compared to a RZR with multi-seating), tall and (compared to a two-seater) narrow cabin area, but the individual components will look familiar. The steering wheel, gauges, shifter, ignition and other switches all came from Polaris’ existing parts bins. There is one exception—the brake pedal. What is that thing? A lot of drivers left-foot brake a Polaris, but the single-seat Ace models have a front drive-shaft tunnel that makes that near impossible. For the RS1, an ultra-wide, stepped (lower on the left) brake pedal was designed to allow left-foot braking in spite of the drive-shaft tunnel. The seat is also standard Polaris equipment, but the RS1 has four-point seat belts that retract like normal shoulder belts. We are big fans of these, and for Polaris machinery, they are seen only in the RS1 and the XP 1000 Rock Crawler Special Edition. They are a Polaris accessory for other machines. The front portion of the doors are low to keep those sight lines to the front wheels clear, but the door sides ramp up at the rear to mid-shoulder to keep the driver securely inside the cab. We say “doors,” but only the one on the left is a hinged door.

Sight lines to the front are very good as well. The hood slopes steeply towards the grill. The front of the car need not be large, since, like many successful race UTVs, the radiator is mounted behind the driver, and it features double cooling fans. This sort of mounting keeps the radiator up out of the mud and roost from other machines. Polaris has pulled it off without restricting vision to the rear.

Polaris’ information makes enthusiastic performance claims, saying that the lighter weight makes this possible. Performance is very good with Polaris’ EFI ProStar 999cc H.O., liquid-cooled four-stroke, parallel-twin-cylinder engine. There are four valves per cylinder actuated by dual-overhead-cam shafts. There is a lot of bottom-end hit in the power curve of this RZR that slowly levels off towards the top end. Fortunately, the 1000 engine’s power is smoother and has less snap off the bottom than the Ace 900 XC. Factor in the longer chassis and superior suspension travel, and you have a machine that is far more domesticated than the Ace 900 XC.

Claimed weight for the RS1 is 1340 pounds, but the XP 1000 tips the scale only slightly heavier at 1369 pounds. Both machines have the same 110 horsepower. The natural comparisons for the RS1 are the XP 1000 that it shares an engine and suspension with, and the Ace 900 XC that is the closest single-seater. In terms of wheelbase, the XP1K is 90 inches, while the RS1 is 83 inches. The Ace 900 XC is 67.5 inches and close to 60 inches wide. It is very nearly as wide as it is long. The Ace also weighs a svelte 1050 pounds. Pricing is always important, and the Ace is the cheapest at $12,999, but the RS1 spec sheet shows that it offers a lot for a relatively minor $1000 more. In contrast, the XP1K is $17,999. Both the XP and the RS1 are also a full 64 inches wide. The Ace has A-arm rear suspension while the XP and RS1 have a trailing arm. The Ace will still (barely) fit in a full-size truck bed.

Polaris equips the RZR RS1 with 2.0 Walker Evans needle shocks in the front and 2.5-inch Walkers in the rear. The steering of the RZR RS1 is light and easy. We felt it might be a little aggressive on the EPS power, but our drive in the RS1 was literally 30 minutes on a basic, guided trail loop.

Despite the shorter wheelbase than the XP 1000, it appears that Polaris made the RZR RS1 cab long enough for drivers over 6 feet tall by pushing the footwells out. On a RZR multi-seater, the wheel wells intrude on the foot room, but the RS1 allows the driver’s feet to be between the wheels. Despite the compact cab, it feels plenty roomy inside with everything in easy reach.

You can easily adjust the height of the wheel by a lever on the steering column, and the gauge cluster is attached to the column. The driver’s seat is adjustable. It has no cut-out for harness-type seat belts, but the stock retractable belts don’t require passing through the seat back.

Given the insane interest levels in this machine, we have no doubt that Polaris has another hit on its hands. Modern sport UTVs are easy to push to the point that willing passengers are hard to find. That is a nonexistent problem with the RZR RS1. It is already a proven racer. In addition, there are rally series that have already announced RZR RS1-specific classes. Unlike some new machines, the RS1 shared suspension and drivetrain mean that there will be little to no time required for the aftermarket to spool up. The suspension choices alone are endless, and some will result in a car that is almost as wide as the RS1 is long! We can’t wait to get ours. Go to www.polaris.com to learn about their entire lineup! 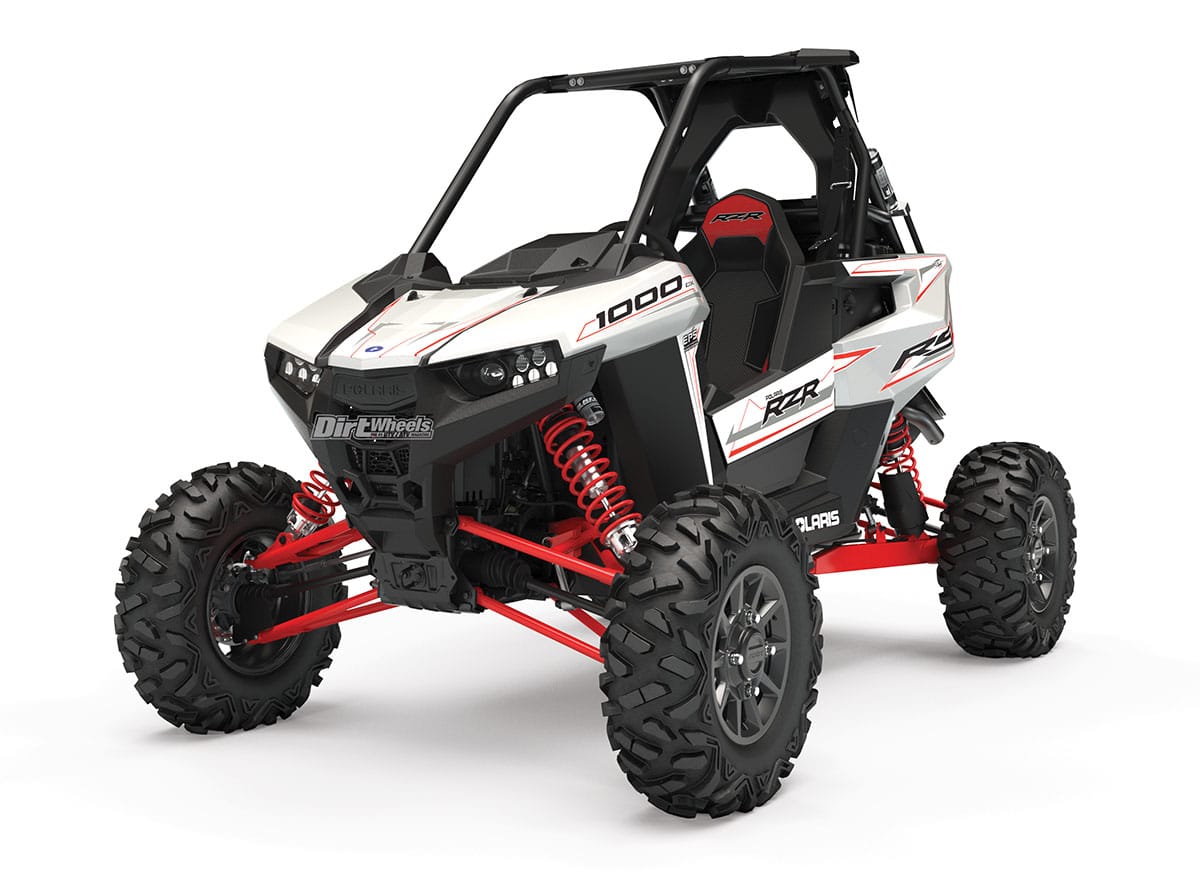