For the past three years, Southern California racer, Doug Eichner, has trav­eled the AMA Grand National cir­cuits. He has enjoyed the “thrill of victory” with the Duncan Racing team. To do this, Doug was competing in the Open Pro/Am class, aboard a ’96 Banshee. For this article, we will call his quads the HOT-ROD BANSHEE’S.

For the past three years, Eichner has flown home from the Loretta Lynn’s Na­tional Finals with the season cham­pionship trophy. Despite as­saults on his championship title ev­ery year, from riders on big-bore Four­Traxes, big-bore four-strokes, and other modified Banshees, Doug has reigned supreme.

As of this date, Eich­ner’s Banshee has competed in a to­tal of 30 Grand National events, win­ning 18 of them and incredibly boasting a 0 DNF record. 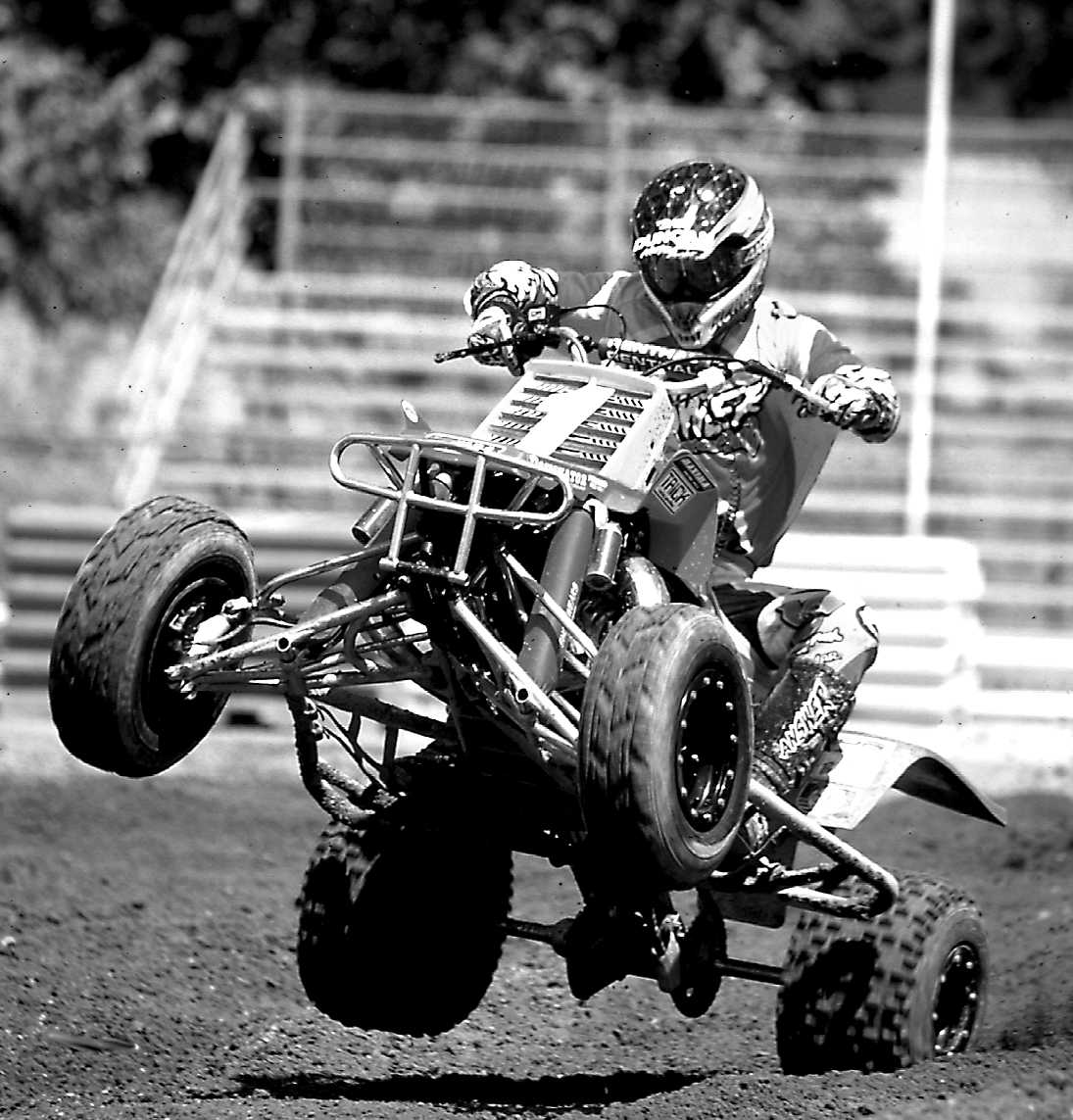 For an inside look at  Hot-Rod Banshees, and what this trick racing machine is all about we set up a test of this unit at Glen Helen Raceway( http://glenhelen.com ).

We joined Doug Eichner, and the Duncan Race team, ( www.duncanracing.com) for a day of practice at the world-famous Glen Helen Raceway moto­cross track in San Bernardino, CA.

The rod is stock with a Pro-X piston and stock crank welded and trued by DR. This pow­erplant also features DR Ad­just­able Timing Plate, DR Masterflow In­take System, and Pyramid Reed Valves. The twin carbs are 34mm Kei­hin PJs with the DR Superflow mod. The airbox remains stock with a K&N fil­ter and FAB 1 oil.

The exhaust system consists of Paul Turner Racing Midrange Pipes (tri­ple-plated chrome) and FatBoy si­lenc­ers with Cascade billet exhaust clamps. The Duncan team uses Trick fuel with Maxima 927 mixed at 32:1 for the Banshee. The spark plug is a Cham­pion N6YC.

Outback, the swingarm is a Laeger one-inch-under ’88–’89 FourTrax-length Pro Trax unit with a Dom­inator 48-inch rear axle and RPM Millenium Carrier. The quad also features a CR500 rear shock linkage. The wet weight of the en­tire machine is 385 pounds.

The brake calipers are stock Honda TRX250R with Braking pads and ro­tors. To top it off, there’s DR steel-braided brake lines and the team uses Maxima brake fluid. 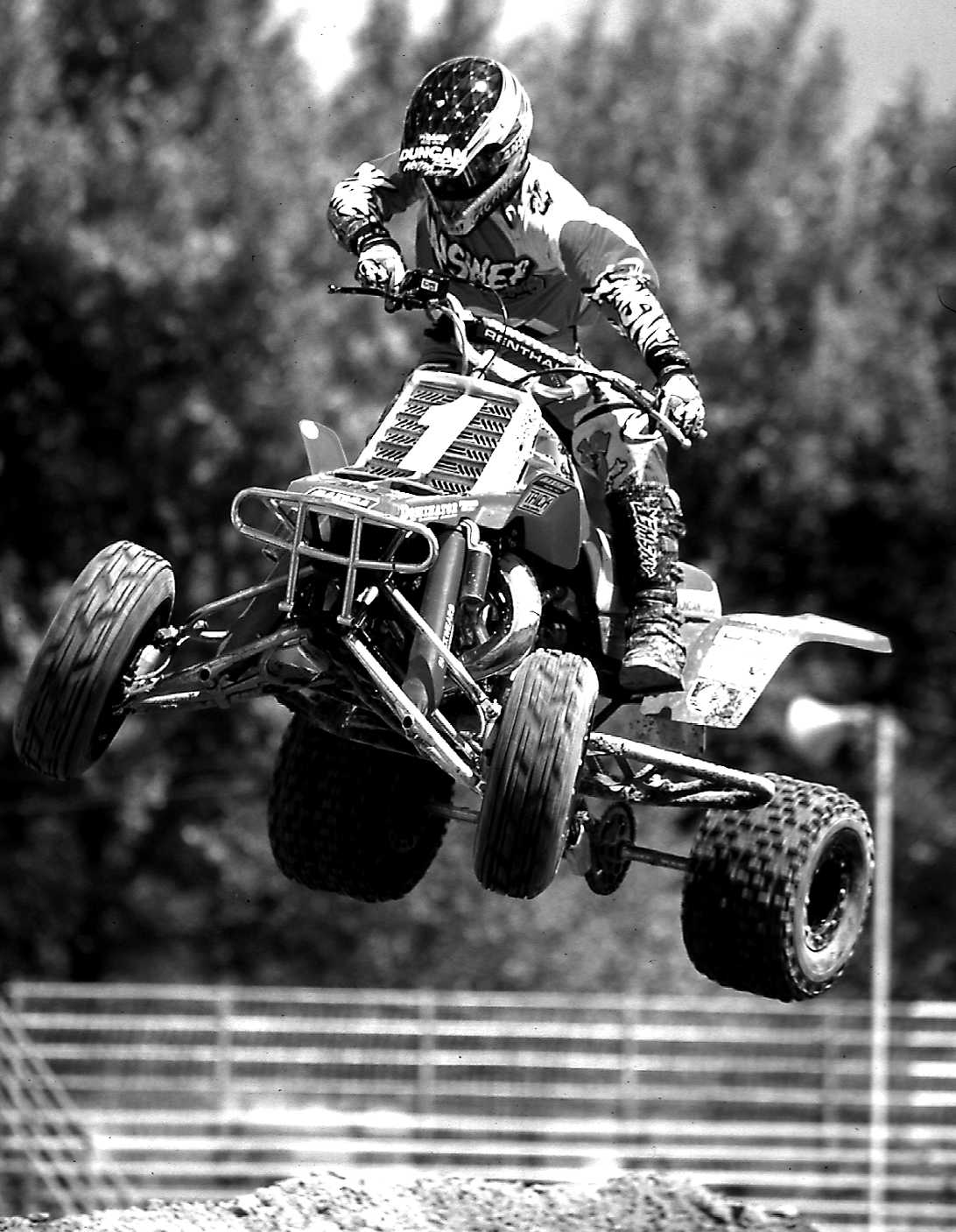 The Dirt Wheels crew took a spin on Doug’s Banshee at Glen Helen, and the general consensus was that this machine is a handful! It’s not that it was evil-handling or anything, but when the power hooks up it really takes off.

A top-caliber rider, like Doug, tames the beast by rolling the throt­tle on at just the right time. He then gets his weight in the correct position. Even on the straights, we were having trouble keeping the front end down on the traction-filled course.

We were es­pecially impressed by the plush suspension—this thing feels like a Cad­illac when landing off the jumps. It was also nice to brapp-pp around on a Ban­­shee that isn’t much heavier than a Honda FourTrax.

“I think it’s a kick to ride!” said Doug. “It has all the horsepower you want, which makes it great for jump­ing because you have plenty of speed to clear tabletops and doubles.”.

“It’s got a pretty good bottom-end, for a Ban­shee. It actually rides a lot like my Honda. And with the Honda brakes, I can really drive hard into the corners. About the only time, I feel the extra weight, is when I case it or land it on the flat, off a big jump.”

“The trick is to stay on the gas when you land. As far as tracks go, I like the big, wide-open ones, much better than the tight circuits, especially when I’m on a Banshee,” said Doug, with a hint of a big smile emerging.

“About the only things we do differently when we switch it over to TT racing, is change the swingarm to a minus-three-inch [from an ’88–’89 standard Honda length]. We’ll also lower the A-arms, install different shocks, and a swaybar. We even take it to the dunes sometimes—it’s my wife Joan’s fa­vo­rite machine!”

THUMPER TALK: The 25 best tips for your 4-stroke