— Why it remains a winner —

Kawasaki has the longest history of any Japanese manufacturer when it comes to UTVs. Starting with the early Mule models and progressing to the evergreen Teryx line, Kawasaki has been a continuous and serious player in the category. It has been a while since there were major upgrades to the Teryx platform, but we have a lot of respect for this machine. After spending time ramrodding the 2019 Terxy4 LE through a gauntlet of Moab trails at the infamous Rally on the Rocks UTV gathering, our fondness for the venerable machine is greater than ever. When Kawasaki introduced the Teryx4, it was considered a sport UTV, and its only four-seat sport UTV competition was the 60-inch RZR 4 800. Now four-seat machines are everywhere in nearly every brand lineup, and there are long-wheelbase, long-travel four-seaters, so the Teryx4 is considered more of a sport recreation offering. That is, by the way, the largest sales segment of the market, and one that remains hotly contested. Despite the competition, the Teryx4 appeals with a wide range of trail capability, but it is best suited for tight trails.

Matrix Camo Gray is the only LE color returning for 2019. It is joined by Metallic carbon gray and Candy Steel Furnace Orange. The fit and finish on all the Teryx models is very nice, but the LE versions are especially fine.

Since 2014, the Teryx has been powered by the muscular Brute Force 750 4×4 ATV’s V-twin with a 3mm-longer stroke. The added stroke ups the displacement to 783cc and boosts peak torque. The engine package breathes through dual 36mm Mikuni EFI throttle bodies. The torquey Teryx V-twin is responsive and capable on the trail. It was able to use its 47 foot-pounds of torque to boost up the steepest climbs in Moab with little effort. Kawasaki has every Teryx limited to 50 mph in high gear. At Moab’s Rally on the Rocks we had an on-road police escort to get to trailheads, so we clearly felt the car top out. Low gear is good for 30 mph. The Teryx4 LE comes with 27-inch Bighorn 2.0 tires, and they only add to the performance with their light weight and aggressive traction. 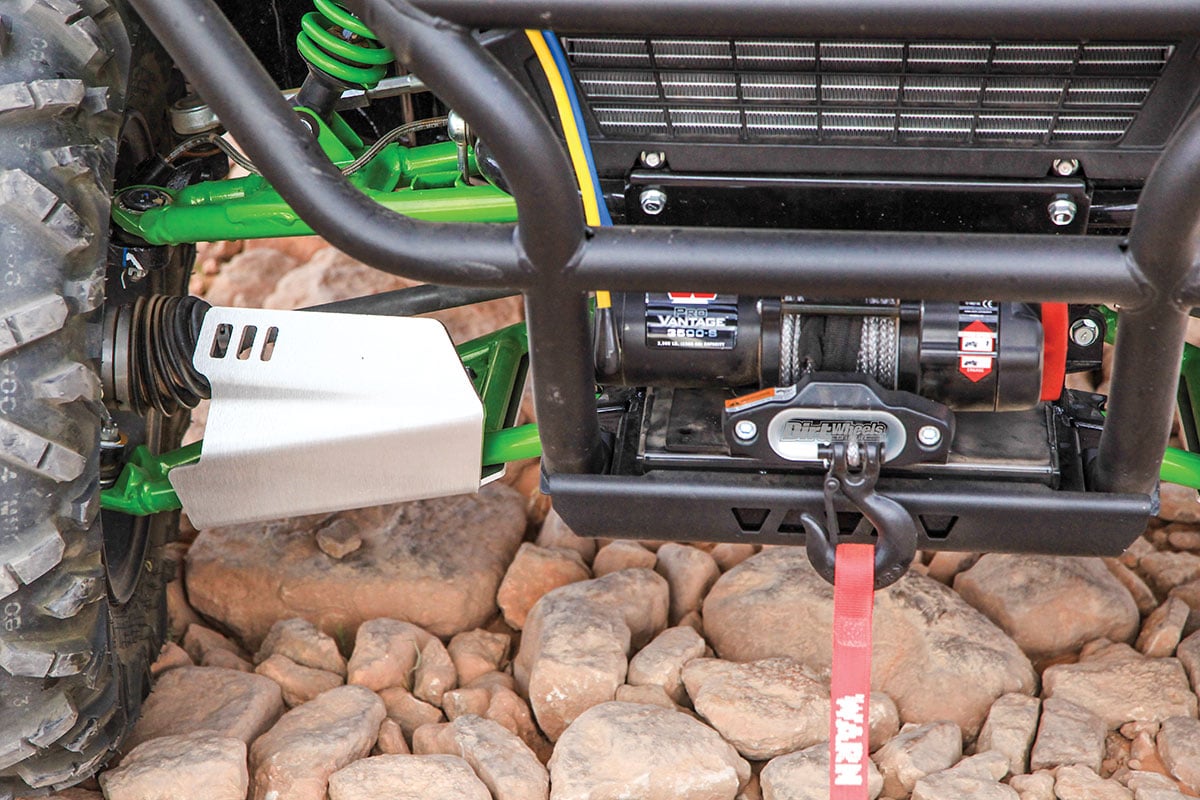 Unlike so many new sport four-seaters, some of which have enormous wheelbase numbers, Kawasaki kept the Teryx and Teryx4 on the same basic footprint. The two-seat Teryx is oddly 2/10ths of an inch longer in wheelbase, but 7.5 inches shorter than a Teryx4. Polaris’ popular RZR XP 2-seater is considered short among sport machines, but it has a wheelbase over 4 inches longer than a Teryx4, though the RZR is a few inches shorter overall without any bed overhang. Kawasaki has done a remarkable job packing four comfortable seats into a small footprint while maintaining a useful cargo bed.

For a 60-inch-wide machine, the Kawasaki has a planted and solid feel in turns and on cambers that you would normally associate with a 64-inch machine. It has a front torsion bar to control body roll in turns. That torsion bar allows it to be snapped into turns pretty aggressively, and it is quite agile. Kawasaki engineers have had a lot of time with the Teryx4 platform, and that familiarity has paid dividends in suspension. Front-suspension travel numbers are 8.0 inches and 8.3 inches in the rear. We normally like double that amount of travel for rough conditions, and 4 more inches of track width. By specifying piggyback reservoir Fox shocks with adjustable preload and 24-position-adjustable compression, and then testing shock settings exhaustively, Fox and Kawasaki have managed to build an 8-inch-travel car that works extremely well. Far better, in fact, than we expected. The shocks come set with the compression adjusters at 12 clicks out, basically right in the middle of the adjustment range, so there is room for adjustment to the conditions you are driving in. Compression adjustments require no tools. Whooped-out trails tax the Teryx4, but it performs amazingly well overall. In most slow-speed situations, the LE does a great job soaking up terrain irregularities.

The Teryx4 has twin-piston front hydraulic calipers, but the rear wheels are slowed by a single, wet multi-disc brake in the rear transfer case. The braking feel is good and controlled, and easily powerful enough for Moab’s steep drops. Push the machine too hard and abuse the brakes, and they lose power until you let them cool off. If you are driving the machine under the limits of the suspension, you shouldn’t have a problem.

The rest of the controls are well-appointed. The steering wheel has a nice shape, size and feel. Naturally, it has a tilt feature. There is no park in the transmission, but it shifts easily and smoothly. A convenient hand brake holds the machine reliably and without much effort.

Kawasaki has comfortable and secure seats, and taller riders like the front legroom. Relatively small shoulder bolsters make it easy to get in and out of either the front or rear seats, though there is less legroom in the rear. Taller passengers knee the front seats in the T4.

All of the dash controls are in handy spots. Kawasaki leaves room for accessory switches and a radio system. Opening and closing the doors is easy, and we never had to slam them shut. Cab visibility is quite good. Our machine had a Kawasaki accessory half-windshield. As long as we kept the dust off of it, it performed well.

Honda’s Pioneer has always been quiet and refined, but Polaris and Yamaha have recently made huge strides reducing in-cab sound, heat, and vibration for the Ranger and the Wolverine X2 and X4. Compared to those newer designs, the Teryx4 shows its age. You share the cab with some mechanical music, and the Teryx4 engine cover transfers heat to the driver’s leg and front drink holders.

A protective roof is standard for this LE model, and that is welcome in sun or rain. Even if you fill every seat with a human, the small bed holds 249 pounds of cargo. For our trip we carried a spare wheel and bag of tools in the rear passenger area. That worked well and was completely unobtrusive in front.

In addition to the standard roof, the LE edition has cast-aluminum 14-inch wheels with 27-inch Maxxis Bighorn 2.0 tires. A standard Teryx has steel 12-inch wheels with 26-inch tires. The Bighorn tires are light, and they work quite well in all conditions. They aren’t the toughest at resisting sidewall cuts, but we had no problems during our test. The LE gets patterned seats and fancier exterior treatments. Our test machine had added suspension protection and rock sliders that were welcome at Moab.

We spent time on both the Hell’s Revenge and Fins and Things trail systems. Hell’s Revenge is steep and precipitous in places, but the driving surface is largely solid rock interspersed with sections of sugar sand. We rolled right off the trailer onto steep and narrow rock ridges. The route is filled with steep climbs and drops, but the traction is prodigious, at least as good as clean pavement. We were happy that the Teryx4 CVT picks up smoothly and accelerates cleanly. It doesn’t lunge or jerk in a manner that would promote wheelspin. It also has an effective engine-braking systems (EBS) that got a workout. During the testing we never caught a whiff of hot CVT belt smell.

For Fins and Things we were part of a group ride, so we had a police escort of city roads for several miles. In the cool morning the half windshield was quite welcome. We soon grouped at the trailhead. We had some very nice machinery in our group, and we wondered how the relatively short-wheelbase and short-travel Kawasaki would stack up. We shouldn’t have worried. We were able to handle every obstacle on the route.

There were some very brief whoop sections and other areas of loose and choppy rock. We backed off and didn’t punish the machine, and it handled everything fine. It isn’t as smooth as longer-travel machines but is surprisingly capable. It was never a question whether the Teryx4 could go where any other machine in the group could go.

For our Hell’s Revenge outing we went with Moab Cowboy (www.moab
cowboy.com) 4×4 tours. We were impressed with their knowledge of the area, and we’d recommend any visitor take one of their tours. “Cowboy” used to use other brands, but repair frequency and costs led him to adopt the Kawasaki Teryx4 as a tour vehicle. He claimed that his personal machine (with long travel) has over 12,000 miles on it, and one of his tour machines has 17,000 miles. He has never had to rebuild an engine on any of the tour machinery.

After our trail experience and hearing of the extreme reliability of the Teryx line, we can understand why we see so many on the trail.

During our rides we spent a lot of time running in low range. Some of the times we used low range were to add throttle control for more precise modulation rather than any true need for low range. In low-range 4WD the Teryx4 climbs very well with little fuss. If the conditions do get a little iffy, there is always differential lock that keeps the front wheels driving at all times no matter the conditions. We only felt the need to engage it a few times.

Our machine was also equipped with a Warn Provantage 3500-pound-rated winch. We used it, but only to lift another car’s passenger-side tires off the ground to check for a wobbling wheel. The winch and all controls for it worked great.

In a world where four-seat turbos have wheelbases up to 135 inches and over 20 inches of wheel travel, is there a place for the Teryx4? For sure. The Kawasaki is easy to buy and own. It comes with a three-year limited warranty, and there are three-year service plans and extended warranties as well. Our machine was easy to load on a small trailer, and it was an easy tow.

It is agile and compact for tackling tight trails and going where four-seat Turbos can’t. The Teryx4 has strong points, including snappy but fully usable power, comfortable seats, adjustable shocks and storage—and aftermarket support can’t be overlooked. If we were in the market, we’d be looking at the Teryx4. It isn’t that much more expensive than the two-seat model, and it is basically the same size for storage and travel. The weight difference accounts for the two added seats and belts, so there isn’t a large weight penalty, either.

This machine is ready for work or play, and it has everything needed to handle both.