How does it compare to the Talon R? 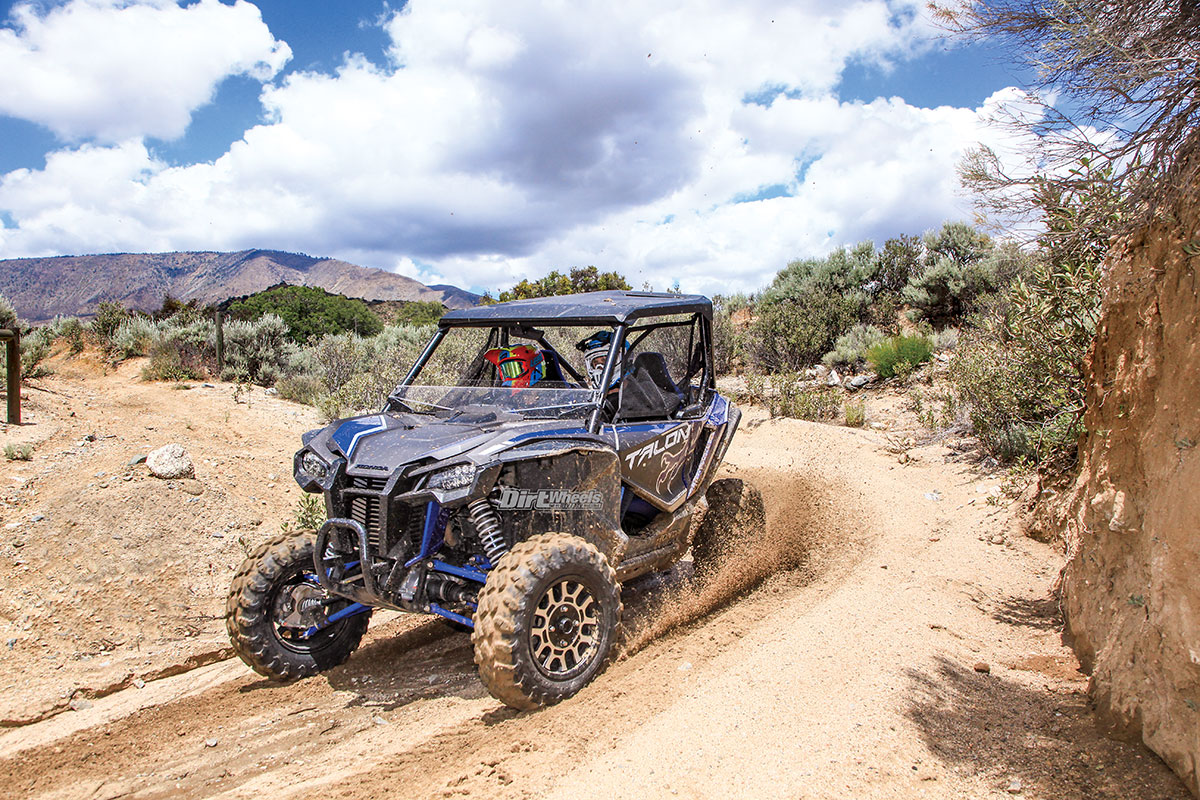 We have been happily submerged in the new world of Honda Talons. After an initial quick test ride, we embarked on an extensive introduction trail adventure in Utah near Zion National Park.  Then having introduced all of our local test loops to the trail-specific Talon 1000X, we were ready for action.

Many trail UTVs have a track width between 50 and 60 inches, but Honda chose to go 64 inches wide. The 87.6-inch wheelbase falls right between the compact-for-a-sport-UTV Polaris RZR with its 90-inch wheelbase and the ultra-compact single-seat Polaris RS1 at 83 inches.

Both Talon models share the same basic engine with the Pioneer 1000 and (from the crankshaft up) the Africa Twin adventure motorcycle. The Talon is motivated by the most powerful version of this UniCam parallel twin and six-speed DCT transmission.

At a claimed 104 horsepower, the Talon is making close to the same power per liter as the Honda CRF450R motocross motorcycle. Honda’s 270-degree firing angle has a pleasant staccato sound rather than the purr common with 180-degree twin-cylinder firing angles.

Honda made the Talon the most powerful version of the 1000cc twin with refined port shapes, 2mm larger (46mm) throttle bodies, and a cam with more lift and duration. Only the Talon UniCam twin has jets that spray cooling oil up under the pistons. Honda outfitted the Talons with the largest radiator and fan used on any Honda ATV or UTV.

As nice as the engine is, the Talon’s Pioneer-shared six-speed dual-clutch transmission is the real news. It sounds great going through the gears, and there are no belts to break.

To be honest, we rarely have belt problems, but on one outing it looked like none of our riding friends were going to show up, and we were going to have to hit the trail alone. We had the Honda and a CVT-equipped car, and we quickly decided that we wanted the DCT car.

You can select the DCT’s normal automatic mode, and it acts like a fully automatic trans. Switch it to sport mode and the engine pulls longer in each gear before shifting. Override either automatic mode using the paddle shifters. Manual mode isn’t a completely manual experience. The DCT will downshift for you if the engine rpm drops too low, and it returns to first gear if you stop.

The Talon has actual engine braking like a manual-shift four-stroke sport quad. A sub-transmission allows you to select between the high and low range. Other drivetrain features are a hill-start feature that holds the car on a hill until you accelerate away at your leisure on grades up to 60 percent.

If one wheel is spinning, the Brake Traction Control System (BTCS) not only stops the offending wheel but channels torque to the wheels that have traction. The brains of the system measure the force required to stop the spinning wheel, and it shuffles four times that amount of power to the wheel on the opposite side.

Honda has a fixture that proves the effectiveness of the system. It requires that one front wheel climbs a steep ramp while the other front wheel is in the air, and both back wheels are on rollers. Neither of the rear wheels spin on the rollers as the single front wheel pulls the whole machine up the ramp. The front wheel in the air did continue to spin.

I4WD is complex, but it does a great job maintaining traction. You have the benefits of a locking differential, but the steering always feels normal. This system is easy on the front differential, and you are allowed to select between 2WD and I4WD on the fly.

In 2WD, Electronic Brakeforce Distribution (EBD) senses the available traction at each wheel and adds braking power where it is needed and can be used. Unlike automotive ABS off-road, EBD is completely transparent in use.

Honda paid close attention to the chassis, suspension, and handling for the X. The suspension travel keeps the center of gravity low, and you definitely feel that. This machine feels glued to the dirt, and we were able to hit double-track corners with tremendous G-forces. We never felt the inside wheels lift. It is equally impressive on cambers.

As we have come to expect from Honda, the human/machine interface is nice. The seats feel good and supportive. Entrance and egress are easy, and the legroom is sufficient for a driver over 6 feet tall. There is ample instrumentation to keep you informed. There are openings in the seatback for harness seat belts, but the machine comes with retractable shoulder belts. Despite the belts, the car feels safe with the window nets, but they do affect vision to the side.

There is a lot of good news on the positive side of the ledger. The interior is comfortable and easy to feel at home in. The brakes are powerful with a good feel, and the handling is quick and nimble but feels fine up to the governed speed maximum of 75 mph. It did push the front on slippery mud, and at times the rear would break away suddenly but it never got unruly.

No matter where we spent time in the Talon 1000X, we found that it was happiest being pushed at a pace that few machines could match. It worked best when the trail was tight and twisty in full throttle; slam the brakes and punch full throttle again.

We kept at that pace for periods that would have been brutal on a belt, but the Talon uses no CVT belt! The 6-speed DCT transmission performed incredibly well. It has a warning light for excessive clutch temp, but despite the pace, we never saw it. For the trail, we preferred the DCT’s standard auto mode, then used the paddle shifters to tailor the power when we wanted to be more aggressive. We also like the manual shifting mode.

The suspension is at its best when you are hammering as well. It is surprising how hard you can hit rough and even land jumps. If the going was rough, we bumped up the rear-shock damping and sometimes all four shocks, but for most trail work, we stayed at the softest damping setting.

Honda techs explained that both the Talon 1000X and the 1000R setup lean towards high-end aggressive driving. After all, they reasoned, you are more likely to have issues close to the limits, so they want the performance-oriented at that end.

We want to be clear: if you drive at the pace the Talon works best at, you will find it very difficult to find a passenger willing to go along for that ride.

At a trail pace that attracts willing passengers, both the engine and suspension are less civilized. You feel driveline snatch and some jerking around that CVT cars don’t experience. We tried all of the shock adjustments, and for rocky, choppy bumps, the 1000X simply isn’t comfortable at reasonable trail speeds. In terms of handling, the Talon X was a joy on the trail and a true weapon in tight-going. We did feel the skid pan hit the dirt a few times, but nothing problematic.

The I4WD and computerized braking and traction control performed brilliantly. And despite a tank of just under 7.5 gallons, the range is very good. Our machine had come from the initial intros where it was driven brutally hard for days on end. We spent multiple more days running it equally hard, and it never missed a beat. Nothing came loose, rattled, or acted up. The oil looks clean, and the level hasn’t dropped. Even the tires still look good.

Even though the suspension isn’t supple or cushy at sightseeing, wife-not-screaming speeds, the reliability, and quality of the build will sell a lot of these machines. Our car was subjected to mud, water, rocks, chop, and high-speed running, and it shrugged off everything we threw at it.

More good news: our Talon X spent a lot of trail time with turbo cars, and Honda’s claimed 104 horsepower allowed it to tag along without trouble. The Talon accelerates briskly and pulls hard from gear to gear. The first three gears feel close, but there is a larger gap to fourth and a noticeable jump between fourth and fifth. The fifth-to-sixth gap isn’t bad.

We suspect that the 15-inch wheels with 28-inch tires don’t help the suspension comfort. There isn’t a lot of sidewall cushion compared to a 14-inch wheel with a 30-inch tire.

Sales of the Talon are quite strong, and we believe that trend will continue for many good reasons. It is a super-capable trail machine with accurate and fun handling character. It provides a visceral, connected driving experience, and the human-to-vehicle interface is great. But the truth is, many drivers fear the CVT belt, and Honda eliminates that worry while providing many of the positive traits that have made CVTs so popular. 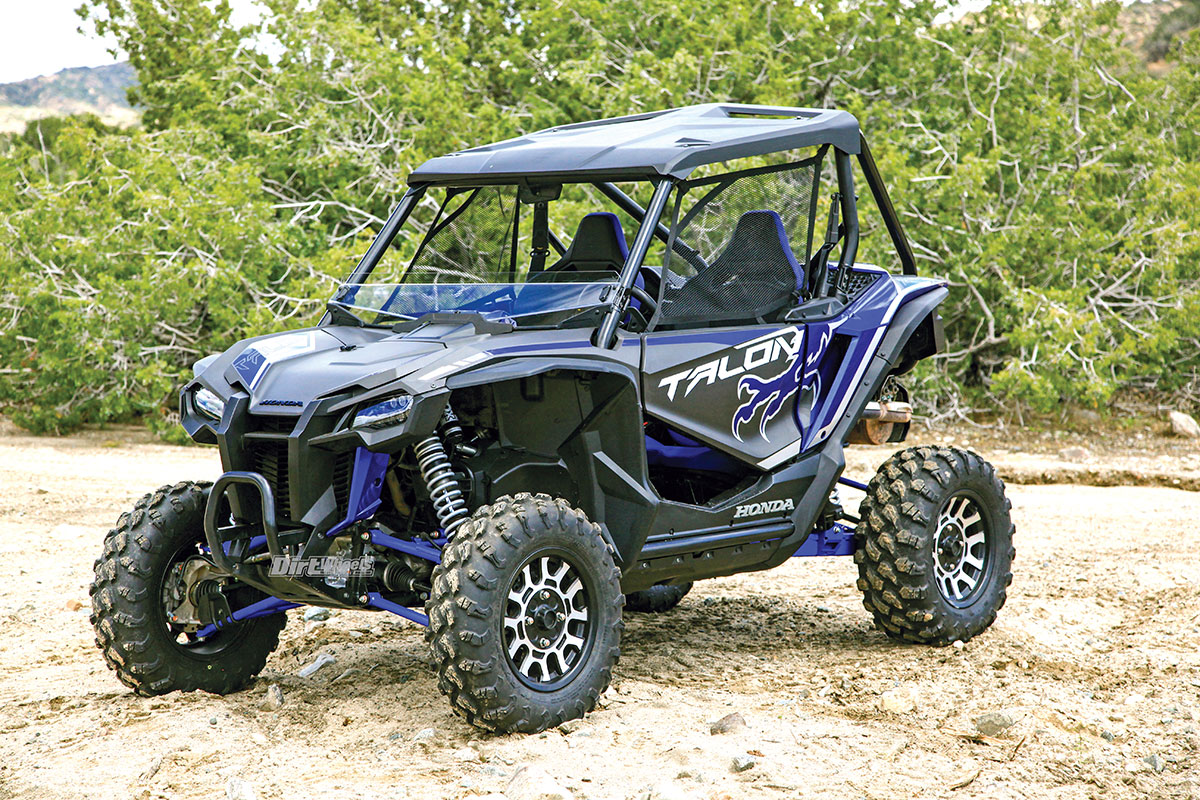